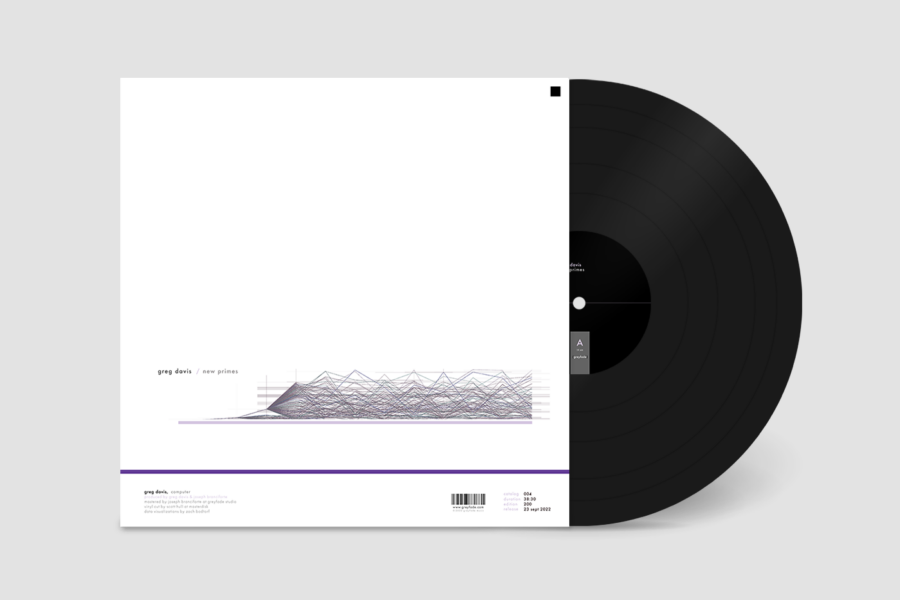 Audiophiles are profs in listening to sine waves on all levels and in all meanings, whether when measuring their system or just for fun. I don’t really regard myself as a true audiophile but I nevertheless got immediately interested in Greg Davis’ new electronic compositions when I was directed to them by co-producer Joseph Branciforte, from grayfade studio. The new compilation called New Primes was released on 22. September, and it contains, to put it briefly, music controlled by prime number sets generated from a network of pure sine tones. The pieces are told to represent an investigation into the compositional properties of prime numbers by making use of just intonation. The titles of the pieces (sophie germain, irregular, proth etc.) simply refer to the name of the prime number set used.

”I began exploring using prime number sets compositionally around 2008,” Davis explains. “I was invited by Important Records to contribute a piece for The Harmonic Series compilation and landed on using prime number sets as a way to develop just intonation tuning relationships and intervals. It felt like a unique position for me.” New Primes is the system’s most recent incarnation.

New Primes features custom-written software to translate prime number sequences into a “mesmerizing universe of sound”. The Max/MSP software uses a network of pure sine tones, and allows various prime number sets to be imported and used to “control aspects of the musical composition, from its harmonic relationships and rhythm to its form and spatialization”.

Here’s how it goes:

”I start by choosing a fundamental frequency for each piece and multiplying that frequency by each of the prime numbers in a given sequence to determine the overtones above the base frequency. Most of the overtones are transposed down several octaves to fit within a comfortable 3- or 4-octave audible frequency range. This becomes the ‘scale’ or harmonic space for each piece. The panning, fades, metronome speed and other variables of each overtone are related to its frequency. Rhythmically, each sine tone follows its own beat cycle by stepping through multiple octaves and silent pauses, which create overlapping prime number rhythmic patterns. The lower overtones generally have faster rhythmic cycles and the higher overtones are slower. All of this acts as a way of relating the rhythmic aspects of the piece to the prime number sequences and integrating it with the harmony, while still retaining a musical texture that sounds interesting to me.”

According to Davis, the pieces one hears on the finished record are extracts of an endless generative music that could last for hours, days, or even longer.

Well, the New Primes is, of course, highly abstract, atonal minimalistic music to begin with. On the surface of it, nothing major appears to happen, only a modulated sound – a sine tone – that goes on and on. But below the surface one starts to hear subtle variations and braking elements creating weird yet appealing harmonies. The sound is alive! Despite its texture, New Primes is clearly not relaxing ambient music but music that requires full concentration, and rewards if one takes time to dig deeper into its endless repetition and inner life. The listener has a feeling that although the music on New Primes is based on mathematical relationships, it’s not just generated by a haphazard computer process, but through a sensitive human interaction that provides it with both the variety and depth. This is Steve Reich’s Drumming Part III made electronic and tense, Sound Art with soul, music between celestial bodies.

A bit of history

Davis’ first experiments coincided with Joseph Branciforte’s efforts to start a record label focused on generative and process-based music, which is now known as grayfade. Later the cooperation led to the first performance of the material in over a decade when Branciforte asked Davis to rework the first Primes project for an 8-channel performance at the Fridman Gallery in New York in 2019. “I kept the basic structure of the original Primes software but worked quite a bit on its rhythmic functions, creating the ability to shorten or elongate the time scales of the various tones, as well developing a method of crossfading between their octave displacements. Finally, I selected a group of new prime number sets to use as material,” Davis explains. New Primes documents this latest evolution of Davis’ system, distilling his expansive 2019 multichannel performance into a stereo version designed for home listening.

GREG DAVIS is an American electronic musician who has recorded albums drawing from a wide variety of sources, including guitar, field recording, various world/ethnic/traditional instruments, percussion, and voice, all processed through digital manipulation. He moved toward computer-based music in 1997 when he started his own label, Autumn Records. Since 2001, he has played shows all around the world and released records on a number of different labels. He has collaborated with Keith Fullerton Whitman, Ben Vida, Sebastien Roux, Chris Weisman, Steven Hess, Jeph Jerman, Akron/Family, Toby Aronson (as Harmonizer), and Zach Wallace (as Sun Circle). In October 2017 Davis opened a record store in Winooski, Vermont under the name of his record label Autumn Records.

GREYFADE is a record label presenting contemporary sound editions, in both vinyl and high-resolution digital forms (but not on streaming services). Founded in 2019 by musician & Grammy-winning recording engineer Joseph Branciforte, the label is dedicated to releasing finely distilled album-length statements from artists exploring process-based work, algorithmic composition, electronic & acoustic minimalism, and alternative tuning systems. Above all, greyfade is committed to realizing albums of the highest quality — conceptually, creatively, physically, and sonically.