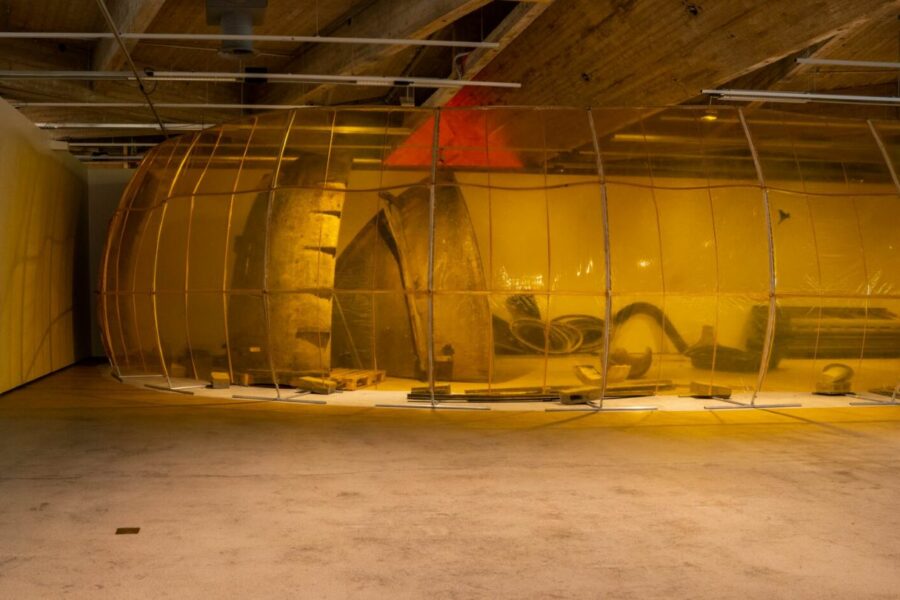 One of the most captivating works of the Search of the Present exhibition at EMMA art museum was Dora Budor’s installation The Preserving Machine. In it a lone robotic bird flies over a landscape composed of architectural remains and debris sourced from the vicinity of the museum. The whole is wrapped into a yellow plastic enclosure.

The bird’s trajectory is said to be based on a motion vector derived from composer Magnus Lindberg’s music score (second violin concerto), whereas the title of the work, The Preserving Machine, comes from a 1953 short story by Philip K. Dick “in which people attempt to preserve classical music during a cultural collapse by encoding musical notes into animals. However, mutations in the animals render the musical works unrecognizable – nature and culture compete for existence”.

The lonely robotic bird flying inside The Preserving Machine makes the spectator feel inconsolable but also visually fascinated. The mechanical bird and the ruins, and the yellowish membrane splitting the space between the viewer and the work, makes the whole thing unreal. The visually effective work symbolized the whole exhibition in that it showed the incompleteness and unpredictability of technological systems, that is always present, by every now and then refusing to work. The bird was there but didn’t want to fly, and nobody could fix it (the same was true of some other works).

Dora Budor (b. 1984) is a New York-based Croatian artist. Budor uses the exhibition itself as her medium, amplifying, dislodging or re-circuiting the characteristics of the context and thereby constructing an interdependency between the work and its host. Employing the phenomenological apparatus of the cinema, she produces images that act as conduits of memory and meaning.