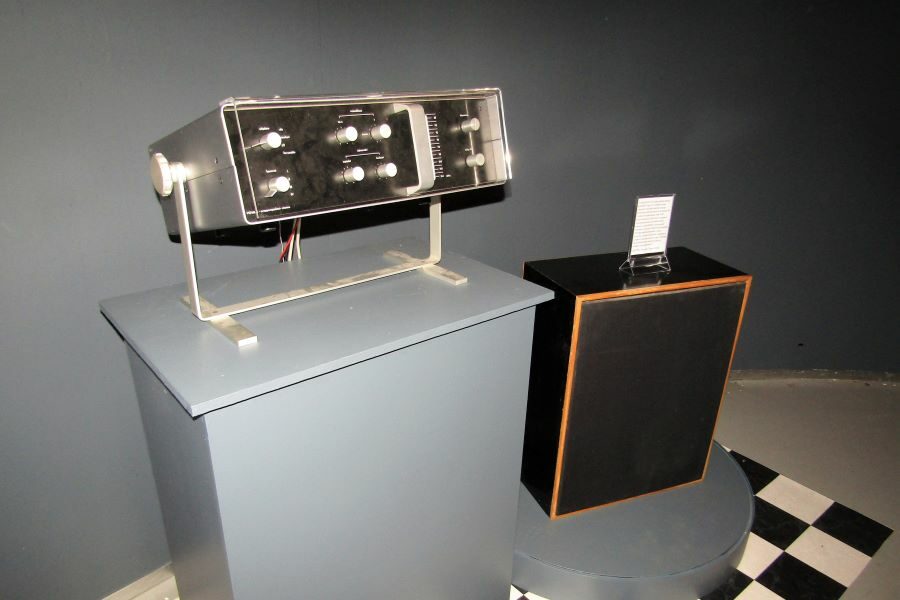 Imagine that in an acoustic recording process (live performance), all sounds of the recording venue, say, a concert hall, including all reflected sounds, have been correctly captured and then stored and preserved onto a disc. Then what? How is that original spatial information best conveyed to the end-listener? Two approaches. One, design and construct a directive loudspeaker or some other speaker that is largely immune to the effect of the listening room (early reflections etc. etc.) so that all info stored on the disc, and especially the spatial clues of the recording, are reproduced and revealed along with the sound of the loudspeaker that consists mainly the direct sound. Second option: mimic the situation in a concert hall by reproducing the sound coming from the stage by means of one front speaker that plays back a sum signal L+R that is basically mono, and the reflected sounds of the concert hall through smaller speakers hanging on the side walls of the listening room producing the difference signal in opposite phase (L-R/R-L).

The latter system was proposed by the Finnish inventor and sound technician Tapio M. Köykkä already in the 1960s. It’s not clear, and not even important, whether his patented system, called Ortoperspekta, was actually the World’s first commercial surround sound system for households. But it certainly came before the quadraphonic avalanche of the 1970s, and the purpose was to create a sound that surrounds the listener and thus makes the listening experience more realistic.

To honor Köykkä’s life work that goes well beyond inventing Ortoperspekta, the Finnish Museum of Technology organized, together with a number of enthusiasts, held an exhibition: VOIMARADIO – Dissident of stereo technology Tapio M. Köykkä (1911–1994). Voimaradio, the name of Köykkä’s company, stands for Power Radio. The exhibition featured a collection of 20-30 objects from Köykkä’s company. Objects were sound reproduction units, collected from several enthusiasts, together with drawings, circut diagrams and patents, as well as other documents from more than one archives. The aim of the exhibition was to make Köykkä, who was involved in so many different projects, and his work familiar to the general public. Among Finnish Hi-Fi enthusiasts there are still many who are familiar with Köykkä’s achievements. One of them, the respected amplifier designer Mauri Pännäri held a lengthy talk about his activities related to Köykkä’s work at the opening ceremony of the exhibition and the closing session.

Unlike the earlier three channel systems, eg. in the USA, that also featured one speaker in the middle, summing the left and the right channel (i.e. monophonic), and L and R speakers on both sides, and Orthoperspekta system reproduces a standard two-channel stereo signal through three speakers to make a surround sound. The 3 channel stereo used 3 omni-directional microphones to make stereo recordings on 3-track tape, and the standard L and R stereo loudspeakers were used to provide the depth and width of the stereo recordings. Ortoperspekta method was based on a stereo signal but aimed at correcting the disadvantages of standard stereo, most notably the fact that the direct and reflected sound come from the same source and direction.

In Ortoperspekta the signal fed to the side speakers contains the actual stereophonic information. While the mono speaker is wide band and of some size, the wall speakers on the side are often small in size, because they only need to reproduce a limited frequency band (300 – 3000 Hz). The fun of the system lies in the Ortoperspekta amplifier that offers a (slide or rotary) switch that allows the listener control the relative amount of sound coming from either the sum speaker or the L-R speakers depending on the recording, music, taste, mood etc. It’s not an on/off-thing.

The Orthoperspekta resembles a MS microphone setup: one mic in front with a radiation pattern resembling a heart, and another microphone with figure 8 radiation pattern sideways. The difference signal L-R is used to control the side speakers. This difference does not include direct sound at all, because the direct sounds arriving at both microphones of the MS setup are equally loud and L – R = 0. Instead, the sounds reflected from the hall walls enter the difference channel, and are reproduced by the side wall loudspeakers, ensuring that reflected sounds are emitted from the right direction. Direct sound is heard from the front and reflected sound from the sides. The great advantage is that the listeners do not have to sit in the middle, but can position themselves freely in the room, and yet the soloist’s voice is heard from the front and center, as it should be, the accompanying orchestra is just as if from behind the loud speakers.

Given that the distance between the microphones in the stereo recording is approximately the same as the distance between the human ears, the difference signal of the channels does not contain anything below 300 hertz because the wavelength of low sounds is so large that microphones that are relatively close to each other do not “notice” any phase difference when they arrive. On the other hand, high-frequency sounds exceeding 3000 Hz do not participate in creating a perspective effect. As a result, the amount of both distortion and noise is reduced when listening to stereo recordings. A more comprehensive presentation of the subject is to be found here:

The strength of the Ortoperspekta system lies in its theoretical principle; Köykkä wasn’t that keen on which loudspeakers and amplifiers were used as long as they were good enough. Some instructions were given as to where to place the speakers but Köykkä wasn’t particularly strict about the placement either. He is known to have kicked the main speaker underneath the sofa and hiding the side speakers somewhere in the bookshelf. And still been able to enjoy the outcome!

At the exhibition also covered a sound work that was an implementation of Köykkä’s Orthoperspekta system. Tapani Rinne and Juha Mäki-Patola were responsible for the audio. I must say it was a pleasure to listen to the sound even while walking from one corner of the exhibition space to another. The sound wasn’t all over although it wasn’t nailed to any particular point. A very spacious soft sound that despite its vague location made much sense.

Ever since Köykkä introduced his system and made required hardware available by means of his Voimaradio company, consumers have argued about to what extends Ortoperspekta is only fit for certain type of music and for selected recordings. Köykkä himself was a passionate classic music lover, and heavily biased towards orchestral music. It is there that his system works beautifully especially with recordings that are recorded with MS (mid-side) microphone technology, using a certain type of microphone placement to create a very accurate stereo image and good mono compatibility. But those who have tried Orthoperspekta more extensively report that the use of the system is not limited to classic music only.

The Voimaradio (Power Radio) exhibition is part of the Museum of Technology’s series of Community Exhibitions, meaning that hobbyists, professionals and enthusiastic technology connoisseurs from various fields are asked to make exhibitions related to the museum’s main themes, and tell about the area of ​​technology that is important to them. The exhibition of Köykkä’s achievements was conceived and implemented with the support of the museum by enthusiasts who have collected Köykkä’s equipment and are interested in his life work and story.

Below are images of some of the amplifiers Köykkä developed over the years.