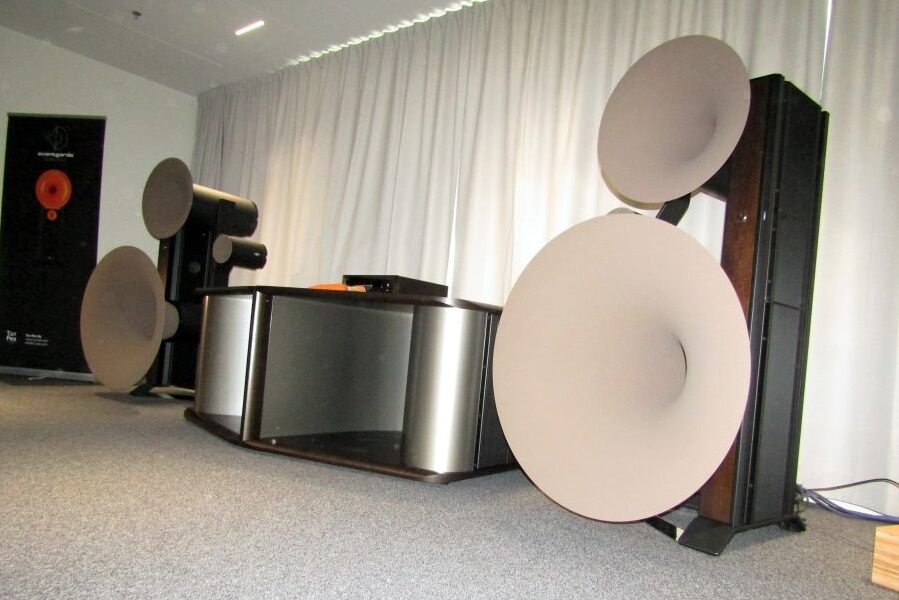 Kannel Audio‘s impressive Magnetar ribbon dipole speaker features a long ribbon that is said to outdo standard high-end ribbon tweeters in the transient reproduction ability. The speaker is up to 3–6 times more directional below 200 Hz than conventional speakers making the speaker suitable for near-field monitoring. Compared to the first version, the woofer section now sports certain adjustments. The front end was a Thales & EMT combo: TTT-Slim II + Simplicity II + EMT JSD 6 + EMT 128. / The Thales sound arm stays right in position from the first groove to the last, and no anti-skating adjustment is needed.

Hypostatic presented a new model called Blackbird (here’s the review of their flagship Hypostatic Indigenum). Blackbird is a sister model to the shorter Verus, and utilizes a slightly shorter, 70 cm CMD diaphragm element, which connects to an eight-inch woofer in a bass-reflex enclosure. However, the crossover frequency of the Blackbird is clearly lower than that of the VERUS (250 vs. 600 hertz).

Boijs is a new actor on the Finnish loudspeaker market. The image shows two of their speakers, the Five and the bigger Eight. The name refers to the size of the woofers (2 x 8″ paper cone) in a sealed cabinet. The tweeter in the middle is a horn loaded 1″ compression driver, split at 1500 Hz. Frequency response: 35-20000Hz, sensitivity 90dB, rec. amp. power 40-400W.

Taipuu speakers‘s new active floorstander L. The demo space in an open corridor wasn’t gracious but the speaker still managed to sound great and keep the bass close to the speakers and not send it to all over. A very unusual and positive experience!

Gradient‘s new Revolution R-5 together with older and smaller sister model 1.4. More of the R-5 here.

Other than Finnish loudspeakers

Avantgarde‘s fabulous new flagship speaker, the TRIO G3 in conjunction with the Twin-Drive Spacehorn bass unit. The system was in Stockholm this spring, and now it was a self-justified show-stopper in Helsinki. The demo was carried out with either a conventional solid-state amplifier, or with Avantgarde’s new built-in iTron Current Drive amplifier. The turntable was Bergmann’s Galdera, RIAA: LAB12 melto2. Cabling by Furutech.

Bowers & Wilkinson offered the familiar system with top of the line speakers from the B&W 800D4 series driven by massive Classe electronics.

Harman Luxury’s JBL 4349 in the arms of Mark Levinson. Made much sense musically.

Here Focal & Naim formed a pair in which Naim’s 500 series amplifier was hooked to Focal’s Utopia loudspeakers to deliver one of the most competitive sounds at the Show.

This monsters is perhaps the world’s largest standmount speaker, PMC BB5 SE. The huge speaker sports a 15 inch woofer, and all other PMC goodies from there up. The speaker weighs more than one hundred kilos each, and cost 41 995 euros per pair. As to amplification, Bryston’s flagship mono with a kilowatt of output power, and receiving the signal from the new reference front BR20. The vinyl source was Rega Planar 10, and cabling Cardas Clear Reflection.

KEF LS60 Wireless was one of the most expected show objects this time, and I got the impression that it didn’t bring disappointment to those who came just to hear this speaker.

Here’s a nice looking British couple: the latest incarnation of the Mission 770 and Wharfedale Elysian 1 from the flagship series. Both speakers were driven with Audiolab’s electronics and Oehlbach cables.

Uncompromising sound at an affordable price range was provided by the Swedish combo Larsen 6.2 speaker and Moonriver 404 Reference. The source was Pear Audio’s Little John turntable with Cornet tonearm.

This was something very special. Akustiikka.com had booked two rooms, one without any acoustic treatment, the other filled with its treatment products: BASSAN bass traps, and DIFFAN diffusers. The playback systems were identical (Sonus Faber Lumina III speakers, Audiolab Omnia CD/network player/amplifier, Kimber 8BR cables) so that people had the opportunity to compare the effect of the room treatment. I’ve waded through numerous national and international the trade fairs for almost 30 years, and I don’t remember that anybody would have tried the same.

The Finnish Hi-Fi Hobbyists Association showed the results of their work in four rooms, many of them loudspeakers. Here’s Technics 1200 TT modified.