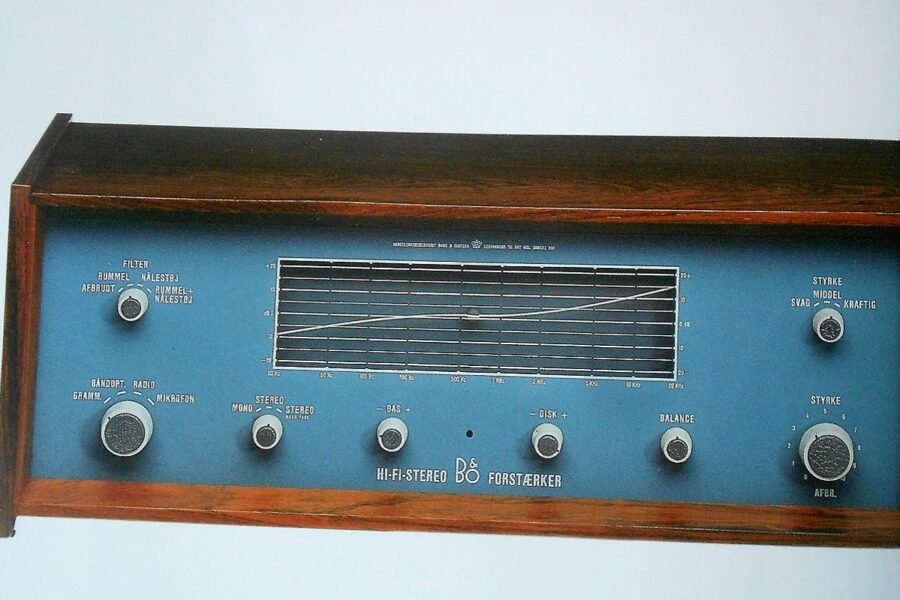 Opinions vary about which time period in the long history of B&O has been its best. When was its heyday? Or is it today? Here are two vintage B&O systems that sign up for the competition of B&O’s most glorious moment. One is from the late 1950s and early 60s, and it consists of B&O 608 Stereo Fidelity Amplifier, and the Type K loudspeaker. The other system is from the 1970s, and you can read it here.

The Stereo Fidelity Amplifier and the Type K loudspeaker are such that in looking at them, anyone sensitive to colors, will melt down completely. In particular, the combination of the blue control panel and the brown wooden case of the 608 Stereo Fidelity Amplifier is staggering. The amplifier was designed by architect Ib Fabiansen, who joined B&O just as it began investing in design and “quality that comes before price”.

The stunning blue of the Stereo Fidelity Amplifier is straight from color palettes of the 1950s. Smoke blue, dust blue, Stratford blue etc.

The colors takes one back to times when elegantly designed cars were beige or cream beige. The stunning blue of the Stereo Fidelity Amplifier is straight from color palettes of the 1950s. Smoke blue, dust blue, Stratford blue etc. were present in both period clothing and interior design. The B&O’s broken, tinted light blue is the fine blue of West Ham’s outfit instead of the boring Millwall’s blue. Similar color was made available much later for the B&O A9 active speaker. And the dark brown (darkened rosewood?) of the wooden case is just the correct dark brown to line with the smoke blue front panel and its white knobs. Perfect!

The combination of B&O 608 Stereo Fidelity Amplifier and Type-K speakers is rare and desirable. Some lucky ones have either, but only very few both. 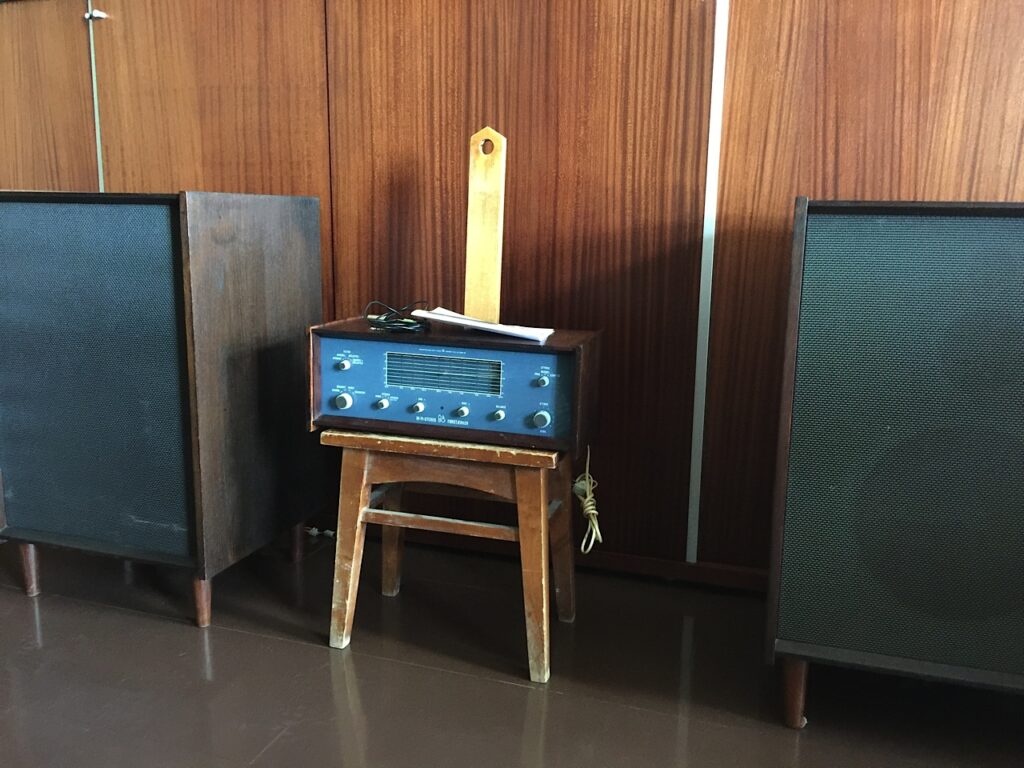 Transistors, one AC 107 and three AC 126’s, are germaniums (germanium, Ge, acts as a conductor). Silicon-based transistors had just entered the market, but not enough experience of their practical use was available. The Stereo Fidelity Amplifier probably was the last B&O amp to use germanium transistors. Silicon transistors may be technically superior and more reliable, but it is good to bear in mind that in some musical devices, germaniums are still considered in a positive light because of their alleged softer sound and ear-friendlier distortion behaviour.

In some musical devices, germaniums are still considered in a positive light because of their alleged softer sound and ear-friendlier distortion behaviour.

Between the preamp transistors and the power tubes of the output there is a double triode ECC83 (12AX7), one half for each channel. It is followed by a ECL85 push-pull pair per channel. ECL85 (6GV8) is a linear triode/pentode from 1961 originally made for televisions (the pentode half can be triode-connected to have a two-stage single-ended triode amplifier).

A push-pull pair of ECL85s offer 15 watts of power per channel. The output transformers have 4 and 16 ohms outputs. The corresponding output voltages are 7.75 V and 15.5 V, and these are reportedly unchanged even if the load impedance is higher than the selected output impedance. The rectifiers for the power amplifier and the preamplifier section are selenium diodes. Power consumption is 75 W.

B&O reports THD <0.5% at 10 W, and <2% at 15 W per channel. This has been achieved by applying moderate 16 decibels of negative feedback.  The 20-20,000 c/s frequency response is said to remain  within a decibel, and up to 100 kilohertz “without resonance spikes”. The crosstalk between channels has been measured at -50 dB and the signal/noise level at -60 dB, “about a thousandth of the signal level”. 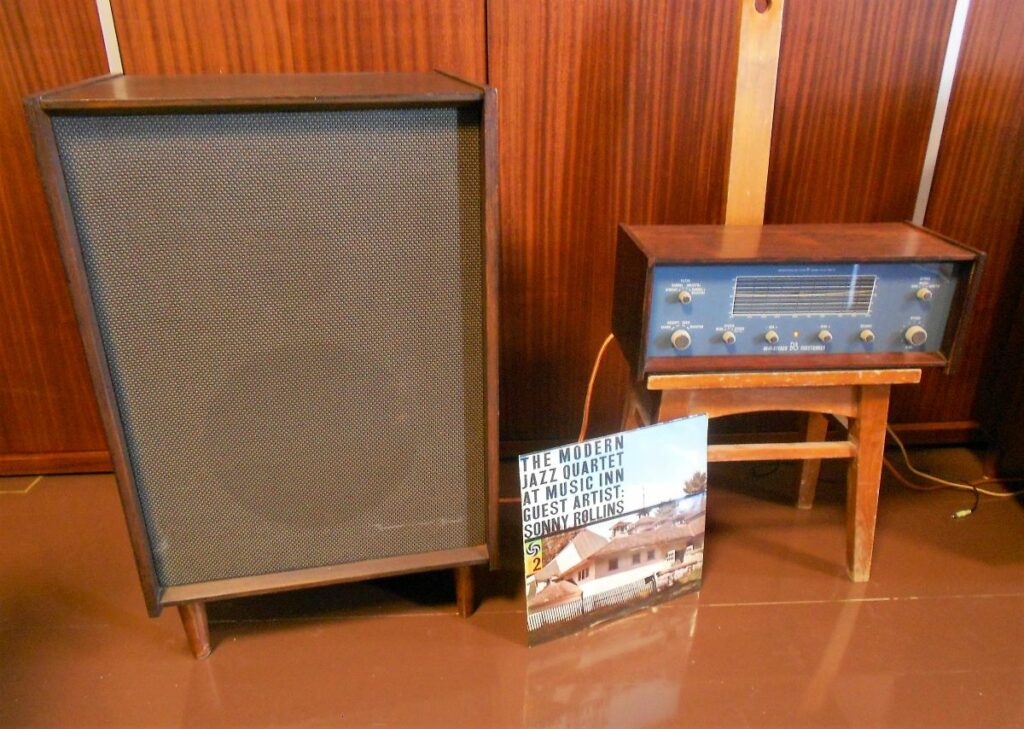 Also for a stereo cartridge

In the early sixties, stereo was not self-evident. Bear in mind that 78 rpm records were sold until 1962. Mono LPs were printed until the end of the decade and well beyond in some cases. FM stereo broadcasts had not yet begun. Thus, the addition of ”stereo” in the name of the amplifier was not pointless.

The amplifier was advertised as suitable for “future formats”, but was also said to be apt for “conventional playback”. This meant not only mono playback, but also the fact that with a separate adapter the amp could input either a 50 mV crystal cartridge or a low impedance 0.5 mV MC cartridge instead of the new  B&O SP1-MI (moving iron) stereo cartridge (2 mV, frequency correction DIN 45547). Other inputs are for a tape recorder (100 mV; 1000 Hz / 5 W), 50-200 ohm microphone (160 mV) and radio (50 mV).

The cutest thing about the front panel is its wide display, whose graphics show in real time how the tone controls change the frequency response and thus the tonal balance.

The cutest thing about the front panel is its wide display, whose graphics show in real time how the tone controls change the frequency response and thus the tonal balance. Such oscilloscopic display, in my view, is more illustrative than the bar chart often used today. 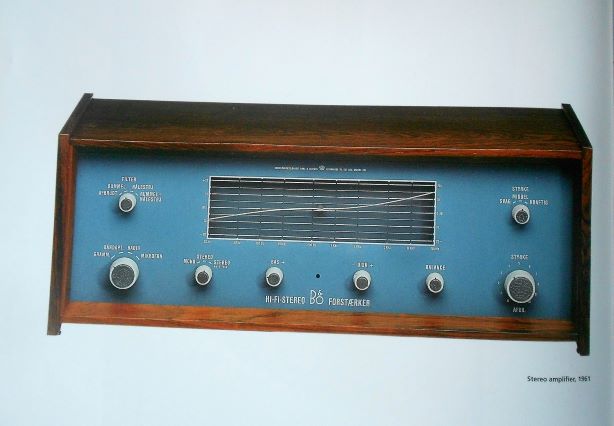 Seventy-seven centimeters high, 45 cm wide and 37.4 cm deep. That’s the Type K loudspeaker that was B&O’s largest speaker model at the time of its manufacturing in 1964-68. It’s not a huge speaker by modern standards, about the size of Harbeth’s flagship model M40, but the size has to be seen against the desperate trend to get rid of the often gigantic hi-fidelity speakers of the first half of the 20th century. In view of that, the Type K loudspeaker was just about the right size.

The speaker is said to offer high-fidelity sound thanks to its “revolutionary pressurized construction method”. In plain language that means ”acoustic suspension” cabinet, or cabinet that is not ported. What made it ”revolutionary” was that Edgar Villchur and Henry Kloss had introduced the principle of a sealed “Acoustic Suspension” speaker just a few years earlier (based on Harry Olsen’s original work for RCA/Victor back in the 1940s).

As is now well known, in a sealed acoustic-suspension speaker a cushion of air acts like a compression spring to provide control for the woofer excursion. Something similar is going on in Type K speaker, when B&O specifically stresses that special attention has been paid to the flexible cone suspension of the three drivers. The Type K is filled with stone wool damping in order to increase the effective internal volume of the sealed cabinet.

The 28 cm woofer features a 3.5 cm voice coil, the 10 cm midrange driver has a 2.5 cm voice coil, and for the treble there is a 50 mm cone tweeter with a 1.27 cm voice coil. The drivers are crossed at   700Hz and 4000Hz. The resonant frequency of the system is 60Hz, but playback drops lower as is often the case with closed enclosures. The claimed frequency response is 30 – 20,000 c/s (- 6dB), and +/- 3 dB: 45 to 16,000 Hz. What a sealed cabinet gains in better woofer linearity, it looses in the speaker sensitivity. The 15 watts of the Stereo Fidelity Amplifier were, however, enough to obtain reasonable sound pressure levels through the Type-K speakers.

The cabinet is veneered with rosewood ply, and the drivers are covered by a fairly thick fabric typical of the time. Underneath the speaker are four 10 cm conical wooden legs, in accordance with  the late 1950s style. 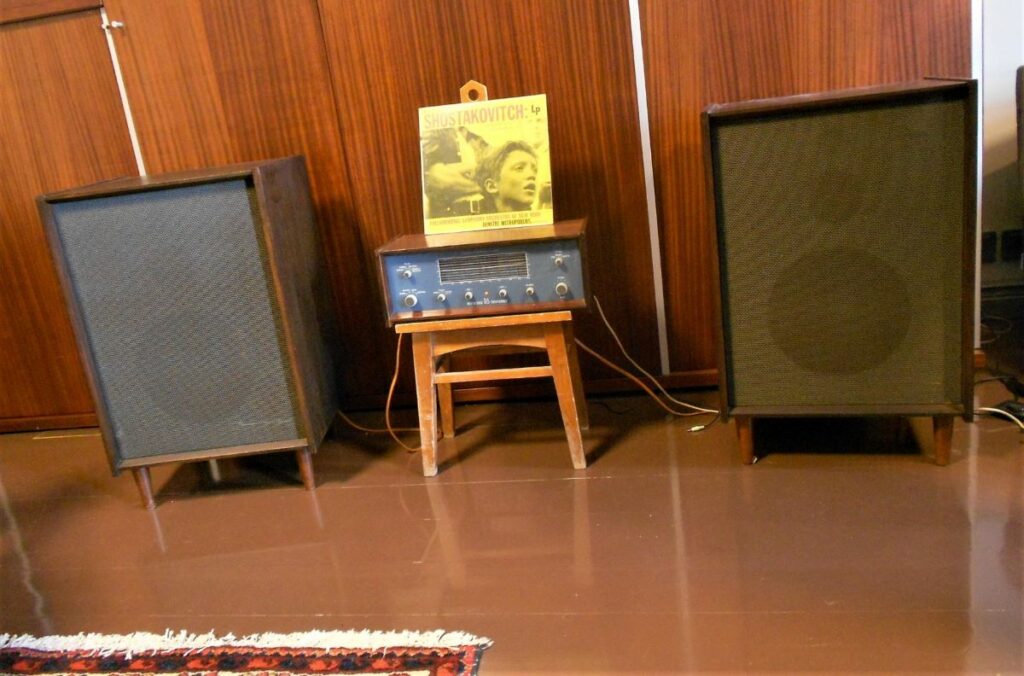 One easily makes the mistake that prematurely imagines a system like this (I had only a digital source for the test), the speakers in particular, produce an antique sound, dusty and muffled. But that was not true. I’m sure that under certain conditions I’d have had difficulties in telling that the sound was coming out of such a vintage hardware.

There were, however, some indications that the sound was indeed not produced by a modern sound system. For example, the speakers stuck in the wall, the bass performance wasn’t what it would be with modern speakers, sealed or ported. The bass simply wasn’t as realistic as what we are used to. But I wouldn’t be worried. For instance, double basses on acoustic jazz records were not only boom-free but also highly plausible.

The midrange was neither over-represented nor veiled. Singers, male or female, were not asked to raise their voice or take a step away from the microphone. The Achilles heel, if you like, was the treble. The 50 mm paper cone tweeter is not, by its very nature, able to reproduce qualitatively similar high frequencies as today’s textile or metal domes. If you insist how a dome tweeter reproduces a violin’s upper string sounds, the Type K may not be a speaker for you. But it’s also a matter of taste to some extent. For example, I found a recording featuring a sonata for solo violin and it got a perfect treatment by this system, clean and rich in color. It was a pleasure to meet this system, and it was a pleasure to listen to it.