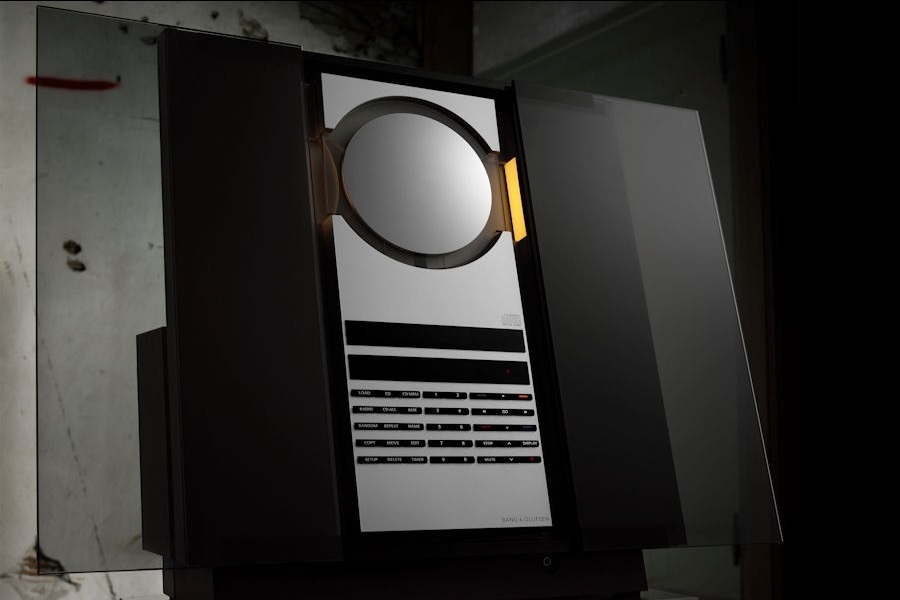 When B&O was finally convinced that elegant simplicity and adherence to the essentials were its way, and not, for example, the Japanese technically oriented Hi-Fi, the future looked less foggy. The 1975 receiver Beomaster 1900 brought along flat feminine shape, technology hidden under a smooth lid, and touch keys to become B&O’s best-selling model for 20 years. There’s no need to repeat the whole history of B&O but it’s essential to understand that the underlying design principles that led to Beosound 3000 were those that helped B&O to keep its head above water, came from the late 1970s and 1980s.

The path to Beosound 3000 goes from Beomaster 1900 to Beocenter 2200 receiver/turntable in 1983, then to Beocenter 9000 receiver/CD player in 1986, followed by the stylish mini-player Beosystem 2500 in 1991 and active Beolab 8000 pillar loudspeakers in 1992, and finally, th six CD-drive BeoSound 9000 in 1996. Why not also the futuristic BeoLab 5 omnidirectional speaker in 2003. Many of these devices from the 1990s and early 2000 were designed by renowned British designer David Lewis, hired by Bang & Olufsen to help legendary designers Jacob Jensen and Henning Moldenhawer. So is the amazing looking  BeoSound 3000 CD player / tuner. 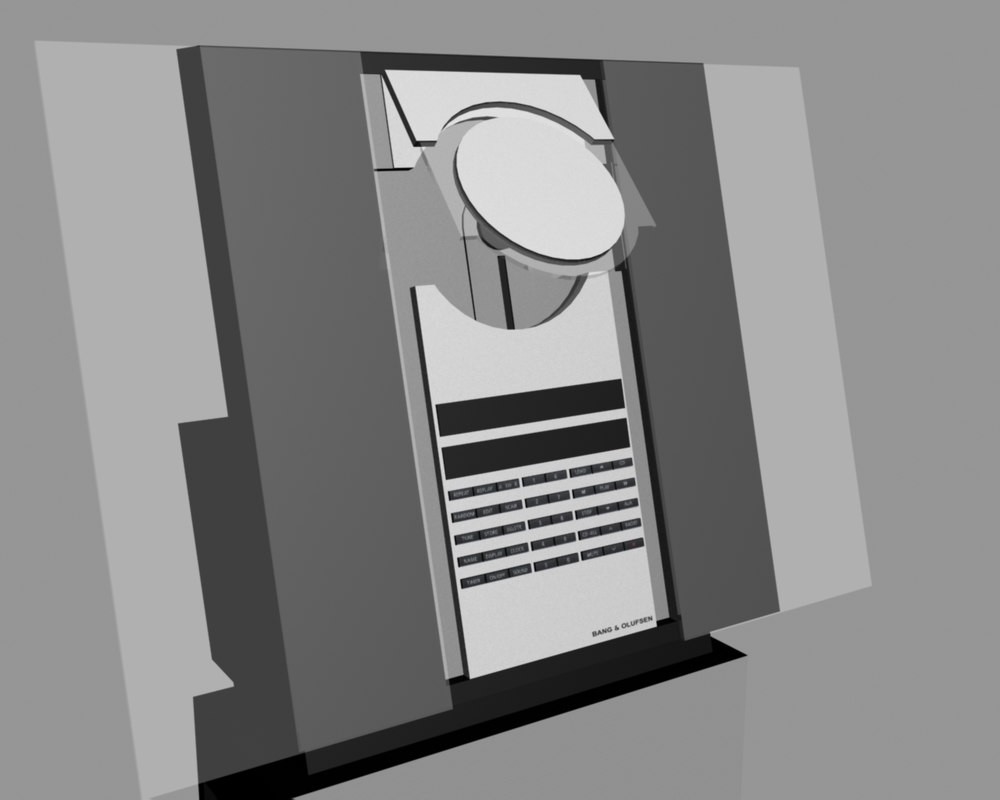 Compared to the BeoCenter 2500, the Ouverture had a completely new CD transport mechanism and some new features for CD playback. Another important difference was Ouverture’s MasterLink, which allowed the player to be connected to several BeoLab active speakers without additional electronics. With the Ouverture B&O also introduced the world-famous Beo4 remote control that was the key to all Bang & Olufsen TVs and music systems later on.

BeoSound 3000 stands vertically open and transparent. That’s the big idea. A major part of carefully considered user experience is the opportunity to see ‘inside’ the device, how it works and how it reacts to the user’s movements.

BeoSound 3000 was in production from 2000 to 2006. Compared to BeoCenter 2300 CD player/tuner, the BeoSound 3000 came with a bunch of new electronics and features, as well as a new “look” with a metal cover hiding the entire CD, for example.

BeoSound 3000 stands vertically open and transparent. That’s the big idea. A big part of carefully considered user experience is the opportunity to see ‘inside’ the device, how it works and how it reacts to the user’s movements. Even the simple insertion of a CD disc has been designed to be part of a greater user experience and enjoyment. In addition to a CD player and radio, the BeoSound 3000 made it possible to play digital music files directly from the computer (Beolink PC2 made it possible to play digital music collections or from the Internet, and send it to compatible devices in other rooms). No cassette player of the BeoSound Ouverture, no hard drive of the later BeoSound 3200.

Information on the Beosound 3000’s technology is scarce and only says that the DA converter was of a bitstream type with an analog filter at the end, the response extending from 20 to 20.000 Hz, +/- 1 dB, and the A-weighted noise ratio 101 dB. The player allowed naming  200 favorite CDs, and do all sorts of tricks regarding the playing order, skipping unwanted tracks permanently etc. The built-in tuner provided presets for 60 FM or AM radio stations as well as RDS. If asked, the BeoSound 3000 also wakes up its owner with his of her favorite music. The function can be programmed for the whole week and the alarm music will turn off automatically after the selected time. 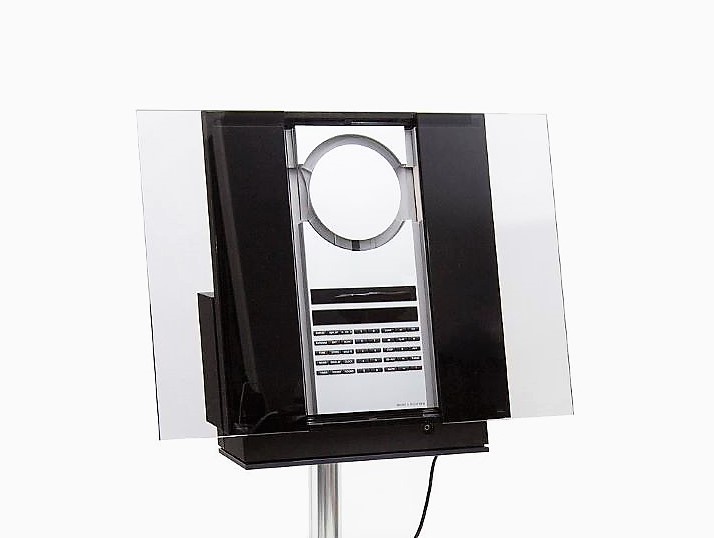 Much of the appeal of the BeoSound 3000 is its sliding glass doors, which was true high-tech at the time. All that was needed for activating the player was waving hand in front of it (an infrared system detects an approaching movement and triggers the motor), and watch the glass doors slide silently aside. It was BeoSound 3000’s way of saying “welcome” to the user. It also signaled that a special user experience is about to begin. As B&O says, a standard ON/OFF button would provide the same function, but there would have been nothing special about it. The glass doors open and close with steel wires, which are controlled by an electric motor through some kind of gearbox.

BeoSound 3000 succeeds in what it is designed to be: an easy-to-reach music system that doesn’t fill home with a bunch of devices. Thanks to its vertical design, it is thin enough to sit alone on a narrow shelf or light enough to hang directly on a wall together with a pair of BeoLab speakers. Although the BeoSound 3000 was in production only for six years, B&O continued to use the same type of classic design for 21 years. During that time, it was remodeled with various brackets, platforms, and column bases.

The BeoSound 3000 can be connected to any BeoLab speaker. An  impressive system is achieved if BeoSound 3000 is married for example with two BeoLab 4000 active speakers or the more compact BeoLab 2500 speakers on a suitable stand. 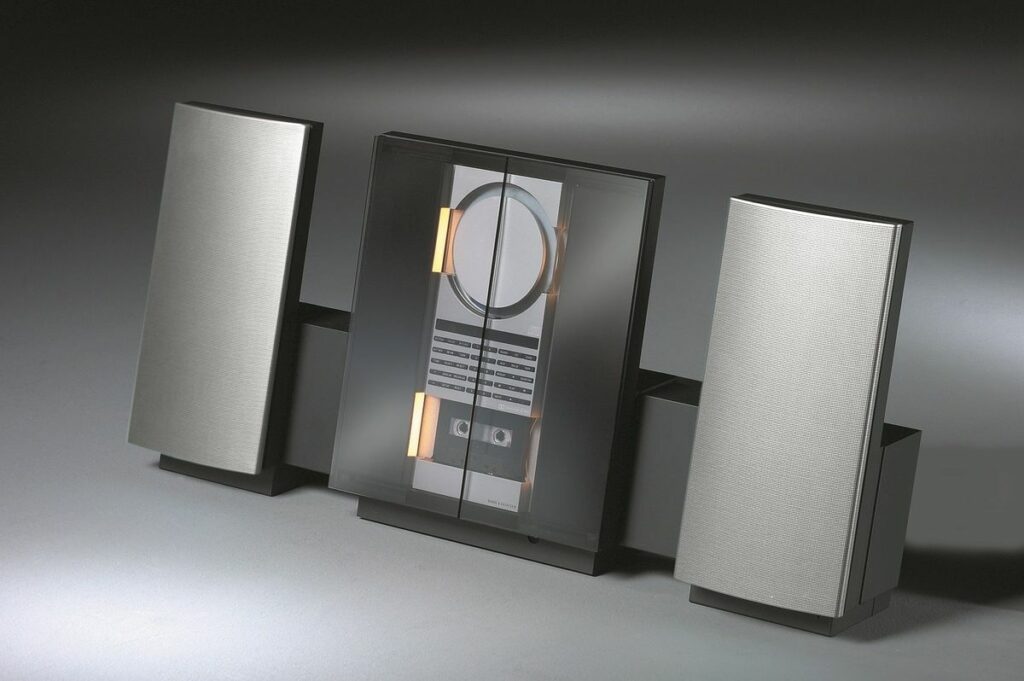 Architects got it right

When I tried the BeoSound 3000 there was no doubt that in view of the sound quality and technical performance, the CD player, connected to B&O’s active speakers, is able to compete with heavier Hi-Fi from the same class, even though the BeoSound 3000 is not a highend CD player as the hobbyists normally understand it. There are less trade-offs between technology and design as with some B&O loudspeakers. But it is equally clear that technology alone would never have been able to elevate the BeoSound 3000 above the gray mass supply, and make it somehow unique in the mind of consumers. In other words, in the connection with the BeoSound 3000 just like with many other B&O products, we have to raise arms up and acknowledge that the architects and industrial designers got it right. By investing in appearance (black/aluminum housing etc.) and in making the user experience (sliding doors, etc.) more sophisticated, B&O was able to create a time lasting product with functional technology.