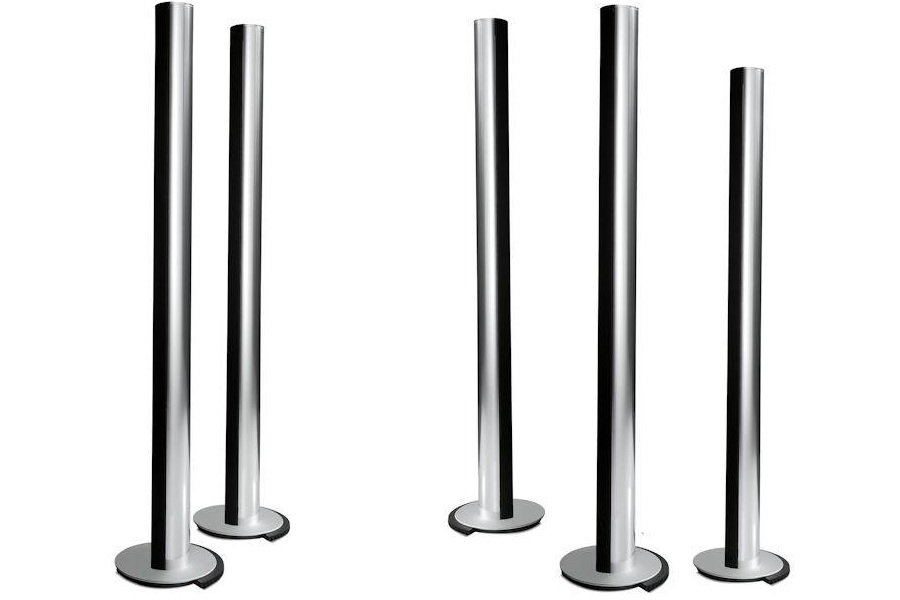 The Beolab 6000 is B&O’s slim active loudspeaker from the early 1990s. It is what it is for certain reasons. To understand what the reasons are, we need to dive into the history of the company.

Here’s the motto: “The products created by Bang & Olofsen communicate their own identity through their visual expression. They are non-verbal communicators. They communicate not only between man and machine, but also between people: those who have created the devices and those who have chosen them. ” (B&O’s definition of “autovisuality”)

The focus of B&O during its first 30 years of operation was on technical innovation and creating an image of quality in the domestic market. Examples include one of the world’s first desktop radios, the “Five Lamper,” from 1929, a 1932 film camera with a new head for audio, the world’s first non-professional tape recorder, the Beocord 84 U from 1947, and so on.

The change in strategy came along with the transition to stereo in the 1960s. B&O began manufacturing stereo units exclusively for growing international markets, and such that they would also appeal customers by their visual appearance. In marketing, “those who talk about style and quality before price” were chosen as the target audience. This was reflected in all of the company’s operations, and it is still visible, albeit in a different way. Aggressive advertising was shifted to a more aesthetic and feminine direction. The then popular Japanese military look was seen as a warning sign.

The new strategy led to a series of famous integrated devices such as the Beomaster 900 from 1964 (B&O’s first mains-operated transistor receiver with small but powerful “pressure chamber” speakers) whose most distinctive feature was its unprecedented flatness and width, which became B&O’s trademark well into the future. The message was that design is not just for experts, but, when properly understood, is a “universal language”.

B&O’s next hit, the “world’s best” stereo HiFi system, the Beolab 5000 from 1967, had a sensitive tuner and a “distortion-free” 2 x 60W amplifier, but again, the most revolutionary feature was its  design. Jacob Jensen and David Lewis designed the transparent slide switches and changed the color of the front panel to aluminum gray. The purpose was to get rid of the American professional rack-based style and replace it with B&O’s own sleek European style. The idea was materialized, perhaps more than in any other B&O product, in the famous Beogram 4000 turntable of the early 1970s. Now B&O was finally convinced that sleek simplicity and adherence to the essentials were its way, not so much the technically oriented Hi-Fi. 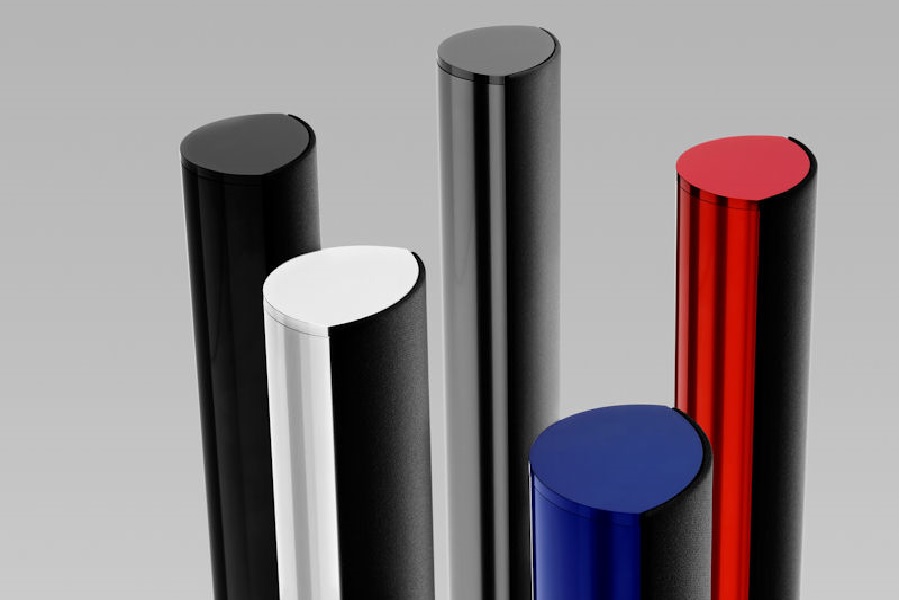 The history of B&O’s loudspeakers goes back to the 1920s, when B&O needed a speaker for the Five Lamper. Harald Linnet was invited to give help, and he soon designed a driver that later became the famous Type D widebandwidth driver, which B&O utilized in several of its radiogramophones, and whose sound was so highly praised by the Italian tenor Benjamino Gigli. Horn speakers were also developed, first for car roofs (such like Tannoy) and later for cinemas. Smaller horns, such as the H4 from 1947, were also used in radiogramophones.

When B&O began making loudspeakers not planned to be integrated in the same cabinet with electronics, they were, for a long period of time, traditional wooden boxes with a single widebandwidth driver. Gradually the number of drivers was increased, but the cabinets remained conventional. Many of these speakers were named Beovoxes, and they were offered alongside radio receivers and record players.

Once B&O realized that they would not win the competition against Japanese manufacturers in the turntable/cartridge markets, nor with CD players, they chose the weakest link of the Japanese systems: loudspeakers!

The change took place in the mid-1960s in the form of flat shells of the Beomaster 900. An unobtrusive yet powerful speaker was needed that would produce a sound much bigger than its physical dimensions would predict. This became the theme of B&O loudspeakers for decades to come and still continues to do so. Indications of the future trend were already there in 1967 when B&O launched the cubic Beovox 2500 Cube in conjunction with the Beolab 5000.

By the end of the 1970s, B&O realized that they would not win the competition against Japanese manufacturers in the turntable/cartridge markets, nor with CD players. The weakest link of the Japanese systems was chosen as the direction to move: loudspeakers!

It was clear that traditional wooden boxes could not go with the flat Beomaster 1900 receiver. They were replaced by the narrow and bevelled Beovox C75 (1979), and Beovox CX 100 (1981) as well as the Beovox Uni-phase single-stand speakers from 1980. The flat Red Line series appeared from the mid-1980s sold well in Japan. Then came Penta (1986), a pentagonal and sculptural, narrow and tall monolith that could be viewed from all directions. Speaker designer Villy Hansen had studied small subwoofers, and decided to make the speaker active by packing inside a Class AB analog amplifier. 900 units were budgeted, 100 000 were sold! However, in terms of profit, even more successful were its successors: the Beolab 8000 and 6000 pillars from 1992. They were B&O’s best-selling products in the 1990s and helped the company, once again suffering from an identity crisis, survive to the next millennium. 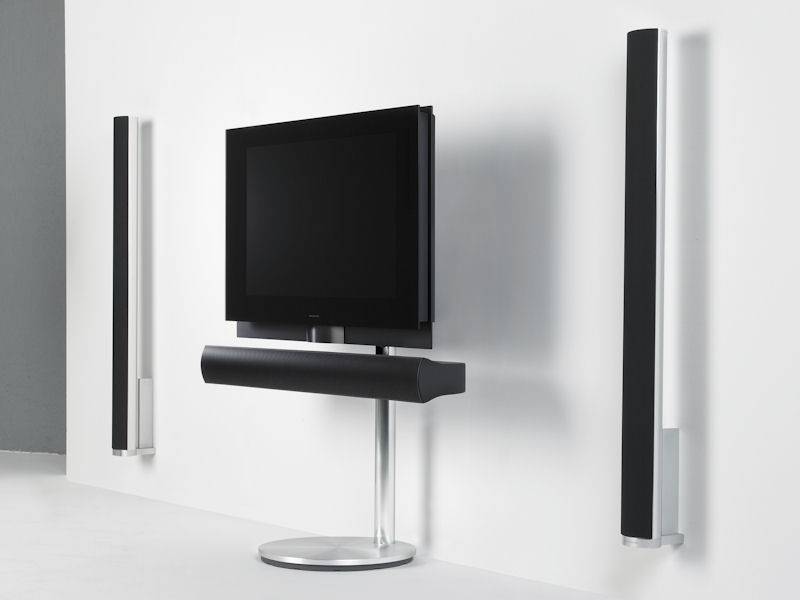 Designed by David Lewis, the Beolab 6000 is a good example of B&O’s unconventional approach. Mind you that “maximum sound from a minimal enclosure” wasn’t such a platitude in the early 1990s as it is today in the era of digital technology. More sound, less speakers. The choice is in the hands of the consumer. The internal volume of the 110Cm high and 6.2 kg aluminum tube is only 3L. Equally important than the appearance was the chance to place the speaker more freely in the listening space than the conventional floor-standers.

BeoLab 6000 can’t boast with watts, or the size of the woofers or with sophisticated tweeters. However, it is a testament to B&O’s ability to combine engineering and design. It’s not incorrect to say that BeoLab 6000 started the design trend towards narrow and invisible living room speakers, and above all, towards eye-catching TV and home theater speakers. Thanks to the two PowerLink connections, the signal could be circulated directly to another pair of stereo speakers.

It is a different thing to touch a surface that looks  ‘cold’ than ‘warm’ or one that looks ‘smooth’ rather than ‘textured’. The choice of materials and the finish make the visual impression more concrete.

A great part of the Beolab 6000 is also how very judiciously B&O used materials in it. That’s because it knew that “people use more than one sense to experience a product”. It is a different thing to touch a surface that looks ‘cold’ than ‘warm’ or one that looks  ‘smooth’ rather than ‘textured’. The choice of materials and the finish make the visual impression more concrete.

It was clear that loud and distortion-free sound from a small cabinet could not be achieved without making the speaker active. In the case of the Beolab 6000, the cabinet houses two 60W Class AB amplifiers, one for the two ported 90mm woofers and the other for the 18mm tweeter. The amplifier allowed B&O cut the enclosure volume to a third of what it would have been if powered by a separate amplifier. Furthermore, B&O was able to customize the treble and bass performance to make up for each other’s shortcomings: the active crossover fine-tuned the signal before it went to the woofer and treble amplifiers. 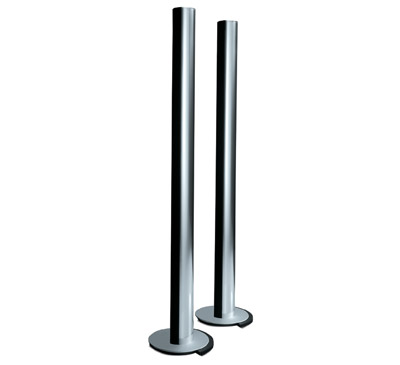 “As for sound reproduction, we believe there is only one essential parameter: how close we can get to the original recorded sound. It is our duty not to disturb the artist’s musical intentions by adding non-natural elements to the acoustic image.”

That is how B&O defines its “authenticity” principle. This authenticity B&O has visualized in its marketing by a young sitting woman watching her self-portrait in the mirror or by a violinist playing in unison with herself on a radio broadcast. The goal is not very original. Speaker manufacturers all over have claimed the same. In the case of the Beolab 6000, the goal can be understood as meaning that in the midrange and treble sound is void of distracting errors, and that the sound therefore is natural as a residual. But what I was left wanting was a positive participation of some sort. A telling example of this was a string quartet, which received a lively and tonally mostly correct performance, while the depth psychological dimension remained halfway.

The speaker has surprisingly comfortable and adaptive bass output. The bass lacks strong power, and yet the bass of a small jazz ensemble, for example, was reproduced quite credibly. Perhaps it was due to B&O’s Adaptive Bass Linearization (ABL) technology that utilizes the excess capacity of amplifiers and drivers at normal listening levels to produce more bass than a speaker of this size would otherwise be able to. Only occasionally the bass  managed to mask the midrange.

B&O reports 55 to 20000Hz (IEC 268-3 and 268-5) as an “effective” response. The 55 Hz sounds to my ears realistic. The SPL (max. 96dB) in the near field was more than adequate. And of course, the sound was airy and immaterial: there was no way to locate the speakers. The sound came directly from the center of the speakers. The Beolab 6000 is a loudspeaker that can be forgotten both visually and aurally, and just let the music play in the background. For such listening, the Beolab 6000 is even better than its somewhat impersonal appearance.