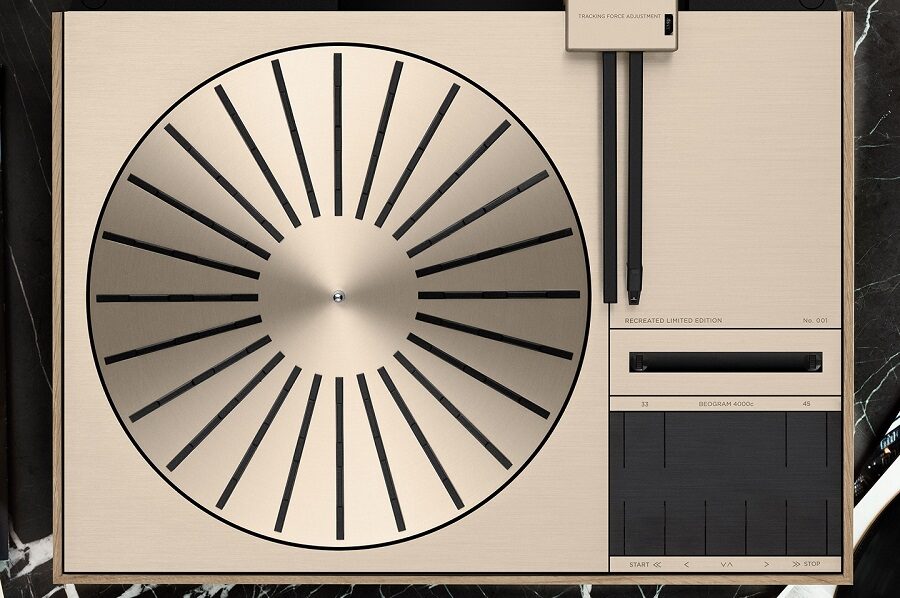 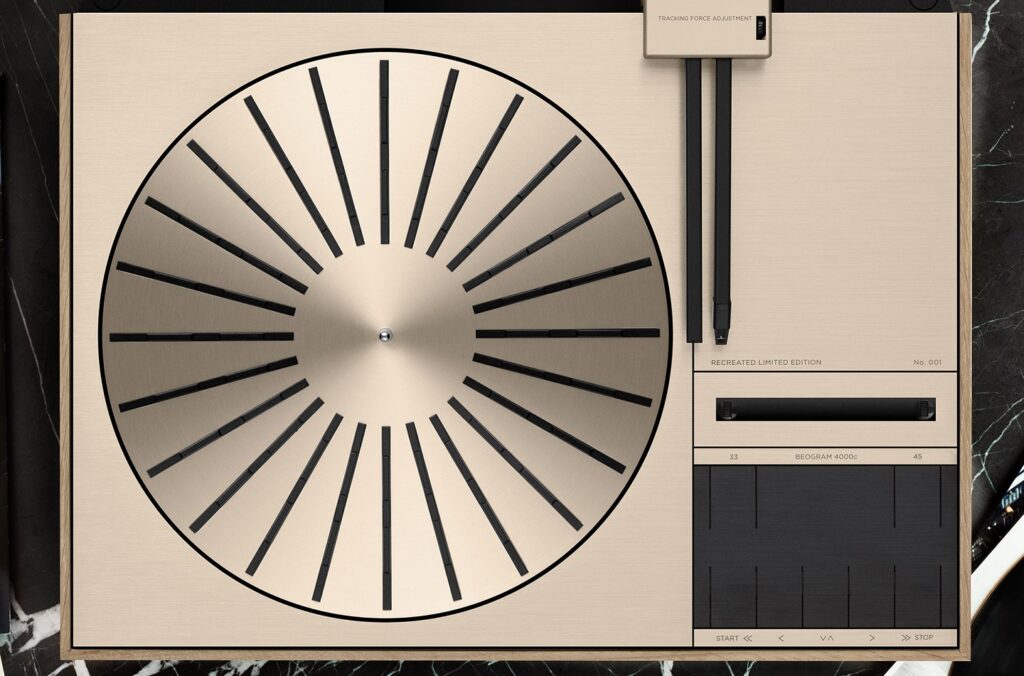 Turntable markets have been shaken by a real boom in the past ten  years or so, Thorens, Garrard, Yamaha and other major actors introducing new editions of their old classic instruments.

Not that long ago, Bang & Olufsen decided to join the ranks with their Beogram 4000c Recreated Limited Edition turntable. But instead of designing a retro turntable that mimics the style of previous decades, B&O decided to acquire 95 original Beogram 4000 players from all over the world – one for each year of operation of the company – overhaul and refurbish them until they were as good as they were when new. Disassemble, check, clean and repair, a component by a component, bearings, drive belt, screws, wiring and so on. Polish the aluminum lid to shine.

As a result, the Beogram 4000c did not become a retro turntable, but a very authentic Beogram 4000. The same individuals that left B&O’s Struer plant 45 years ago, and where they were now inspected, in part by the same people, have been restored to their former glory ”with the same kind of punctuality, care and passion as any timeless masterpiece”. 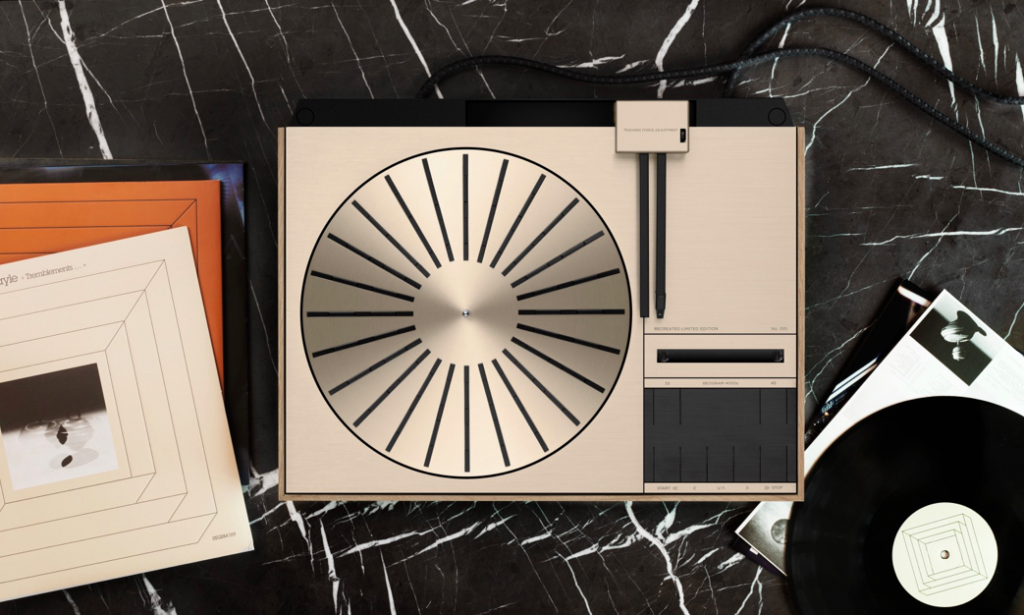 The basic engineering and technology of the Beogram 4000c is identical to the original. The chassis is built of a die-cast plate, which serves as a base for the thin wooden plinth. The plinth was originally made of teak, or rosewood (a white version also existed), but for the 4000c B&O chose light oak veneer to match the luxurious transport case.

The plinth supports a cast subframe that floats on three adjustable wires and three curved steel spring strips. The subframe has a sturdy bearing assembly for the cast platter. The platter is driven by an electrically controlled synchronous AC motor via a belt. Between the motor and the mains, there is a true precision oscillator. It enables automatic speed selection, quick fine-tuning, and removes the demand for different motors for export markets.

The small window of the minimalist control panel allows one to follow the stroboscope through the lenses and mirrors. The RPM can be fine-tuned to ± 3 percent, which is equivalent to about a quarter  note when measured with music. Unlike the original 4000, the control panel as well as the tonearm tubes are made of dark – not gray – aluminum. The dust cover is also new. 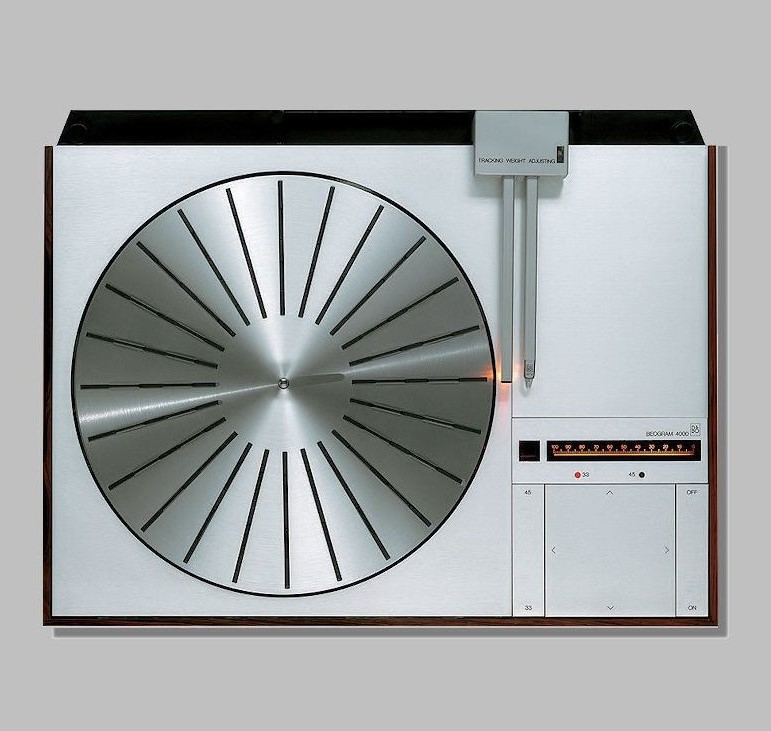 The best-known feature of the Beogram 4000 is its tangential tonearm. It has been kept in the 4000c with minor updates. On the linear arm, the cartridge and the stylus run in a straight line and not on the circumference of the circle as the long arm with a bearing. This prevents tracking error and the turntable also plays the innermost grooves of the LP more distortion-free. At least in theory.

Solid chrome rails in the subframe support the tonearm. The arm moves on the rails via the lead screw that turns the rotational motion into a linear motion. The screw is driven by a precision iron-free servo motor, one of the most expensive parts of this turntable.

The arm moves on the rails via the lead screw that turns the rotational motion into a linear motion. The screw is driven by a precision iron-free servo motor, one of the most expensive parts of this turntable.

There are two arms in parallel, one for the cartridge and one for the optical reader (photocell). The latter controls the movement of the tonearm electronically with a beam of light reflected from the record, while taking care of, among other things, the correct position of the cartridge in relation to the record groove. When the player is turned on, the arm automatically moves inward to the edge of the LP or single, measures the disc, and lowers the cartridge into the record groove. The speed is automatically determined by the size of the disc. To change the track or to pause the playback, the arm can be moved manually using the level buttons on the control panel. 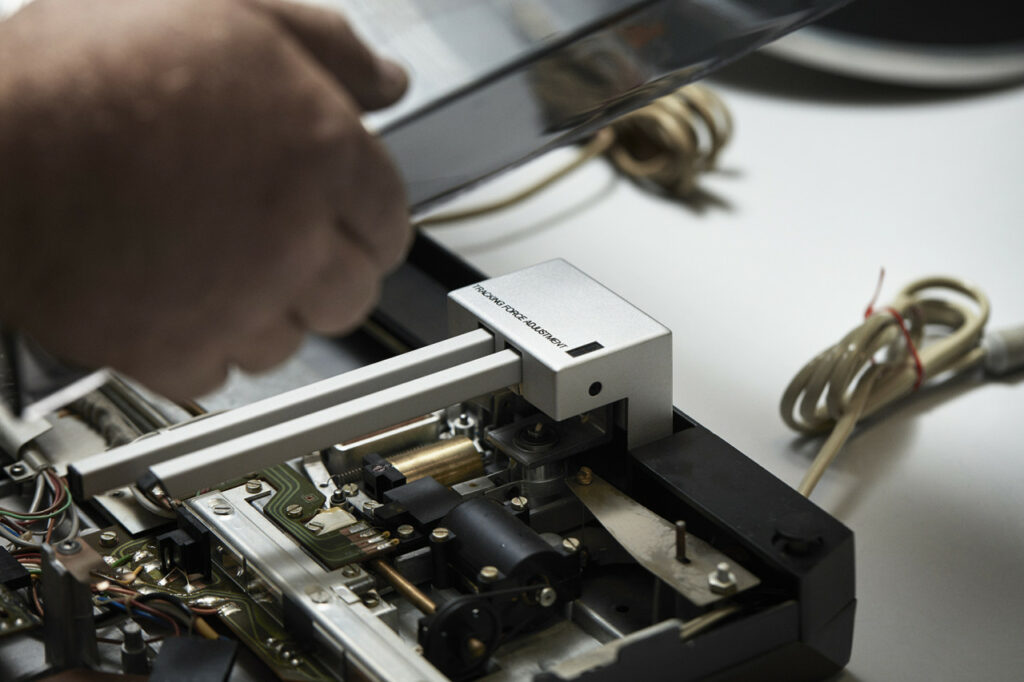 The cartridge is number one

For some turntable manufacturers, the number one ingredient in the turntable is the body and plinth, for others the mass of the platter, for the thirds the drive mechanism, for the fourth group the tonearm with all of its mechanical subtleties. For B&O, the most decisive factor in a turntable, in terms of sound quality, is what happens on the surface of the record in the moment when the stylus lands into the groove and begins to follow it.

Starting from the SP15 from 1958, B&O’s specialty has been MI or moving iron cartridges. The MI cartridge resembles a MM (moving magnet) cartridge, but instead of the magnets or coils moving, what is moving is an X-shaped (four-pole) iron anchor at the end of the cantilever. As it moves, the anchor modulates the magnetic field seen by the coils – one at each leg of the X – caused by a fixed permanent magnet near it. This creates an electrical signal.

The Beogram 4000 (also the 4002 and 4004) was originally delivered with B&O’s own Moving Micro Cross cartridge, MMC4000 or MMC6000. The 5 x 17u geometry of the stylus tip was designed by Pramanik. The idea was that in order to reproduce high frequencies correctly and minimize record wear, the area of the stylus vertically with the groove wall would be as large as possible while the contact on the horizontal axis would be kept to a minimum. But the question is not about the traditional elliptical profile, but rather what would be called line-contact or contact-line profile.

For B&O, the most decisive factor in a turntable, in terms of sound quality, is what happens on the surface of the record in the moment when the stylus lands into the groove and begins to follow it.

The diamond stylus is not attached to the steel tab of the cantilever but directly to the cantilever (“naked”). Due to the small size and to improve tolerances, the body of the cartridge was sealed, which made the stylus irreplaceable. If the stylus wore out or got broken, B&O offered a new cartridge for half the price against the old cartridge.

The cartridge of the new Beogram 4000c is the SMMC20CL, that is, a B&O MMC20CL cartridge made by Soundsmith for B&O. It features an iron anchor, a sapphire cantilever and a contact-line stylus tip. The effective mass of the moving parts is slightly greater than in the MMC6000: 0.32 milligrams. The tracking force recommendation has also been increased from 1.0 to 1.3 grams. The reason for these figures is to allow for modern LPs’ higher modulation and motional shifts.

In search of modern times

The all-new Beogram 4000c has a built-in, non-bypassable RIAA-preamplifier. For the purists this may be a bit of a embarrassment. However, the solution represents present-day, and is especially relevant in the B&O’s case, because it offers several fully active speakers to which the 4000c can be easily connected to form a complete Hi-Fi system. Indeed, it appears, in between the lines, that  the owners of the Beolab 50 (€ 30,000) or the Beolab 90 (€ 70,000) have been a planned target group for this revived 10 000 euro turntable. Various cable adapters for the DIN cable are included for connection.

The technical guide that joins the turntable, and its long list of references, is a great succinct introduction to the inner life of a turntable. The booklet also explains in detail why certain solutions have been found for the Beogram 4000c, and information is available  on how the turntable has been tested and measured. Best of all, the technical data provided are not just some non-specific empty figures, but for each measured value it is determined with which reference it has been obtained!

When depicting rotational stability, B&O not only gives the traditional “wow & flutter” value, but also distinguishes between “speed drift” and “scrape flutter”. The wow & flutter value is obtained by using the AES6-2008 standard, the specific features of which have been carefully described. Speed drift is measured according to the IEC-386 and rumble DIN 45-539 standards. In other words, future owners of the turntable can be confident that their refurbished Beogram 4000c has been tested as objectively as a turntable can conceivably be tested, and that the performance in this regard has been fine-tuned to its peak. 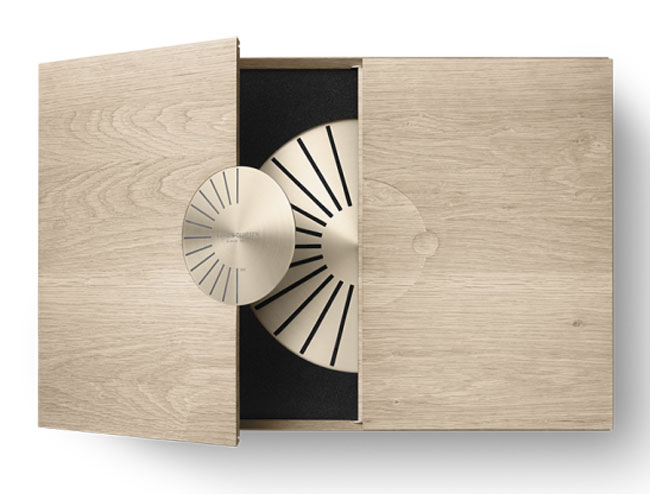 I did not have a chance to do a full review of the 4000c but I did spend a day with it, testing and listening to music by Duke Elington Orchestra (big band), Kenny Burrel (guitar), Tom Jones (vocal), Eduardo Niebla & Antonio Forcione (guitar duo), Belafonte (vocal), Keith Jarrett (piano), Wieniawski (violin concerto) and Eric Bibb (blues), et cetera, plus the necessary cello sonates, organ chorals and the like from the OPUS3 and Ortofon test LPs. The listening room did not shine in size but as a former recording studio, was decently acousticated, and the speakers were great active Beolab 50s.

Best of all, the technical data provided are not just some non-specific empty figures, but for each measured value it is determined with which reference it has been obtained!

As I said, the turntable had been thoroughly tested and fine-tuned, and I think it can be argued that the process be heard in the playback as well. There are no obvious or even less obvious reproduction errors. The sound is accurate and precise. The performance is also highly  consistent and unbiased from a record to another. The overall tone color does not lean to any direction. The output is neutral and harmonious. The level of detail, especially at higher frequencies, is high. The player picks up the nuances from the groove without adding artificial brightness to the sound. Even the highest non-harmonic overtones of cymbals are reproduced audibly and naturally without significant bottom noise.

The bass is extended, emphasizing correct quality rather than the warmth range of the music. The lightness inherent in the sound may have been due to the resonant-free room or the speaker settings, but I’d be inclined to say that the cause was the cartridge, and that the apparent lightness probably reflects the expectations of the manufacturer as to what kind of sound is preferable from the turntable (and the speakers). If the two had to be set opposite, B&O would choose linear rather than full. The new 4000c is designed to retrieve as much info from the record groove as possible rather than to deliver that full-bodied velvet sound, say, from  Garrard or  Thorens or EMT turntable with a long Ortofon arm hooked up with NOS Ortofon SPU cartridge. You know what I mean.

The same goes for dynamics: the 4000c had no difficulty in reproducing amplitude variations without delay and convincingly, but there are turntable & cartridge combos out there that are even more secure with amplitude variations. So, should we conclude, according to the tenacious belief, that the tangential arm is valid only for classical and other acoustic music? Absolutely not! I got to hear lots of good music with appropriate presence, cool sounding jazz singer without sibilants, powerful organ playing down to the tallest pipes, sharp well-timed cello playing, a believable jazz bass player, the knockout voice of Tom Jones, and lots of other fabulous music. The Beogram 4000c may not the best turntable in the world, but its sound does have the same luxurious quality as the player itself.

The Beogram 4000c turntable is an excellent demonstration of what can be achieved with careful basic research but also with a precise implementation of the technology, in this case the tangential arm, for example. On top of that, the turntable is delightfully easy to use and and exudes reliability. Best of all, after 45 years, the player looks as gorgeous and stylish as ever. Timeless.

The bad news: As far as I know, despite the 10.000 euro price tag, the entire batch of 95 players sold out right away.