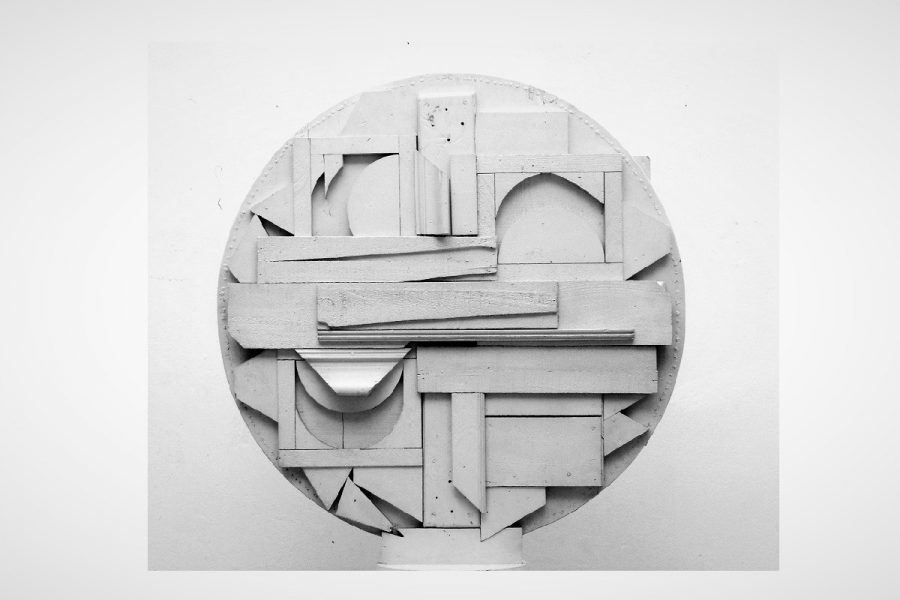 Born in Russia (1899) and emigrated to the USA in 1905, Louise Nevelson achieved major recognition in the art circles only in the 1960s, when she already was over 60. However, soon she became one of the most celebrated post-war sculptors.

Already at very early phase of her career, Louise Nevelson, influenced eg. by Jean Arp, became fascinated by abandoned, often wooden objects, of which she begun to assemble sculptures and assemblages. She would paint them matte black and combine the separate elements into a totality.

The fact that the color was black is significant. For Nevelson black symbolized all colors in one. The sooty black is constantly repeated in her smaller works, such as collages, too.

Later in the 1950s, her monochromes (black, but also white and gold) filled entire walls the scale approaching that of abstract expressionist paintings. These large altarpieces were made of eg. lathed chair legs, balusters and scraps of wood.

Apart from being single color, Nevelson’s monumental works seem to differ from her collages and other smaller works in that they seem to signal something spiritual and eternal. It is thought that in these works Nevelson expressed something deep of her personal mythology. She was searching for the highest harmony also in her smaller works (collages)  but there’s something overwhelmingly sacred and liturgical about the large-scale wooden sculptors.

Dawn’s Host (1959) was originally part of the room-filling group of white-painted sculptures named Dawn’s Wedding Feast (MoMa NY). This totem with a round wooden piece on top speaks mythological, inapprehensible cosmic language just as mummies do in the museums, or  the monolith in the beginning of Stanley Kubrick’s A Space Odyssey 2001. Just as the larger Totality, the Dawn’s Host at first appears static and muted but under a longer gaze starts to demonstrate some slow dynamic movement.

It would be worthwhile to make a closer comparison between Dawn’s Host and Ben Nicholson’s (1894-1982) wooden reliefs (eg. White Relief from 1934). Both were influenced by Cubism but where Nevelson’s work is more dense and organized, Nicholson’s relief is freer,  purer and spiritual in a more abstract way, reflecting a search for a different kind of harmony.

Parallel to her more spatial works, Louise Nevelson explored the potential of the collage, which enabled her to intuitively explore subjects in smaller formats. Like the sculptures, Nevelson’s collages, often tri-color (black, brown, and orange), are made of abandoned objects: pieces of wood, paperboard, news paper clips etc. combined into ”poetic observations of the overlooked objects”.

None of the collages in the exhibition, made between 1950s – 1970s, had a name. All were untitled. Was it because the abandoned objects deserve anonymity? On the other hand, unlike in the larger works, in her collages the trash (scraps of wood and paper) gets visually praised more individually.

Nevelson’s collages remind me remotely of another artist from the British artist group Circle, Victor Passmore, and his abstract works, collages and reliefs. He too pioneered in using of new unconventional materials. But Passmore is more artistic and architectural providing the elements of his works a thoughtful look, while Nevelson’s collages are more haphazard and raw to which the black of ”burnt” wood adds its mystical flavour. As Louise Nevelson put it: ”I make collages. I join the shattered world creating a new harmony.”

Some of the Nevelson’s collages could be criticized for their too secure use of colors, and unsurprising compositional solutions, but as the exhibition proved, her style is very uniform and deeply rooted in her search for the highest harmony.