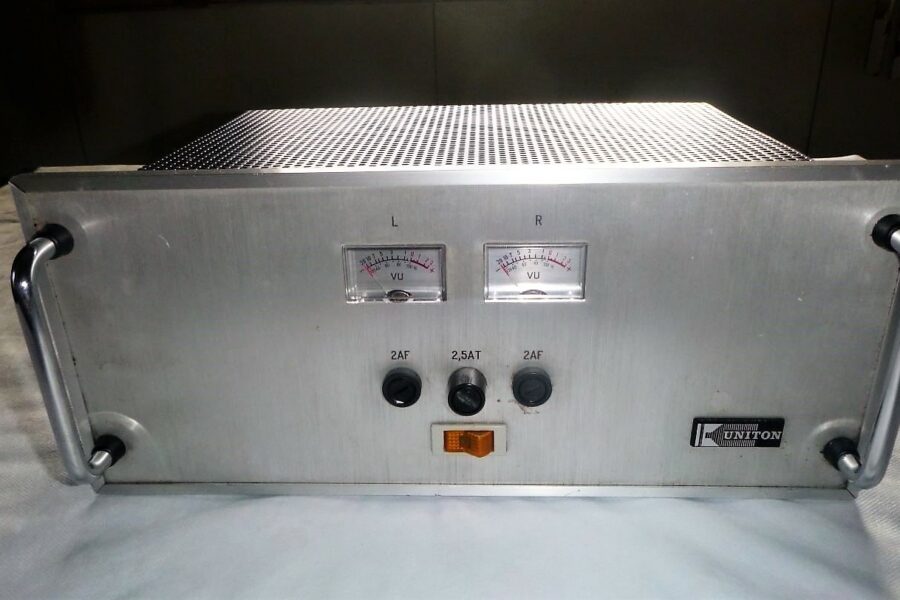 Every now and then, over my fifty five years of adventure in the world of hifi, I’ve come across something that is quite exceptional. Meeting Uniton is one of those occasions, and here’s the story.

A Finnish hobbyist contacted me about a year ago, telling he had found an odd- and rare-looking faulty stereo amplifier from the archives of his late father. He asked me if I had time to look at it, and maybe get it running? Now, I’ve learned to be very cautious about accepting any malfunctioning (and even properly working!) hifi gear to land on my already gushing equipment room, but this case was different. The device in question raised, just on the basis of one image, a sufficient amount of curiosity, so much so that I said Yes to the query. The gentleman then popped in for a coffee to drop the product promising that I could receive it as a gift provided that it, after restoration, bestowed me any sonic joy. 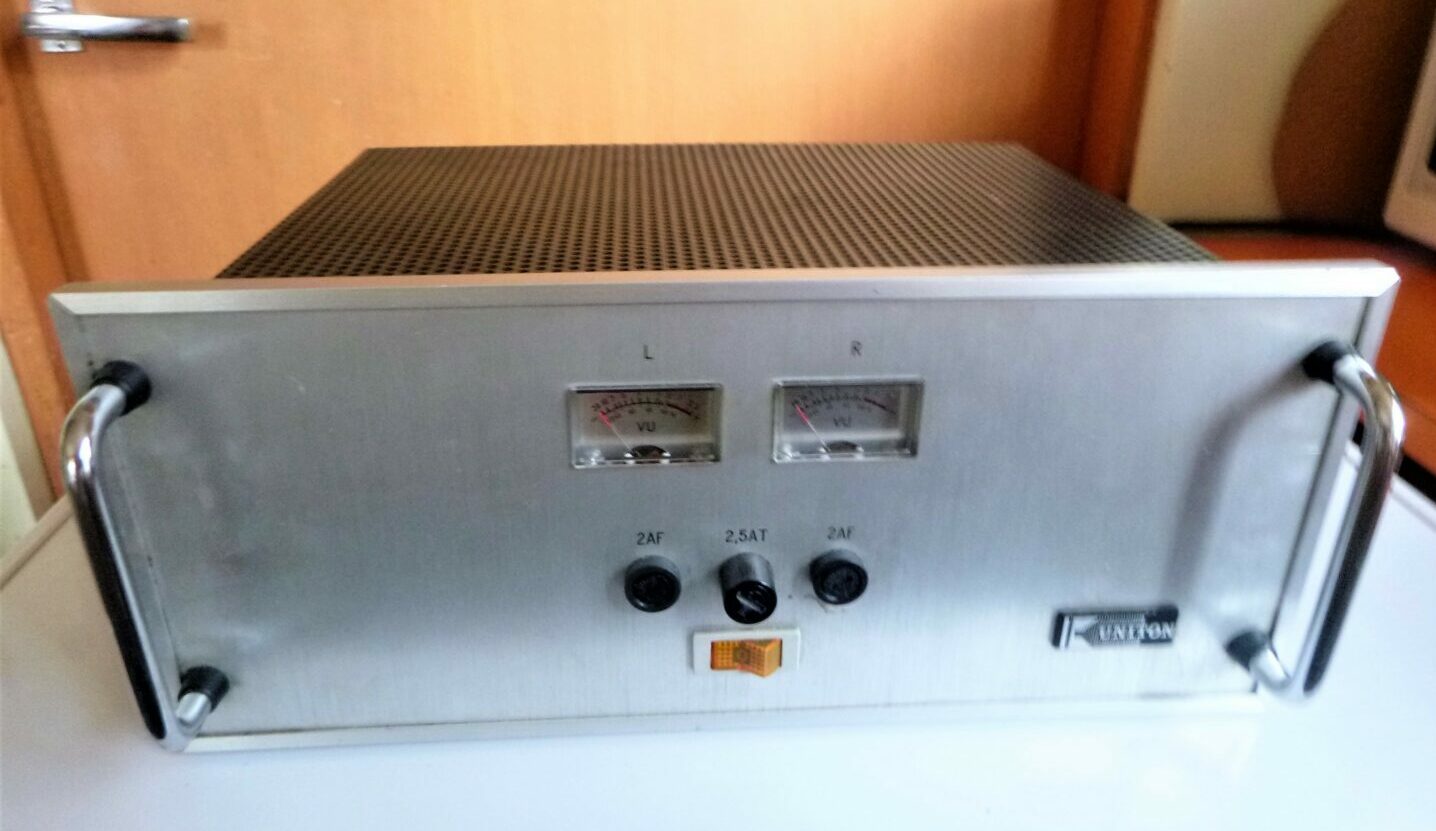 To be honest, I had never heard or seen the name UNITON before, or such logo on the front panel. With a pilot illuminated power switch, two power meters, and three fuse holders, the unit looks bold and extremely stylish! The first obvious thing to do was to google about the subject. And indeed, such a manufacturer really once existed and still does: the Swiss UNITON produces and sells professional sound systems and voice alarm systems worldwide. I found a contact person on their webpage and reached him, and soon we were exchanging emails. Mr. Canonica kindly told me the following:

In the 1970s, there was a strong boom in Switzerland to convert bars and restaurants into discos. That generated a demand for a suitable and economical power amplifier to drive two sturdy stereo speakers at the edge of the disco’s ceiling loud enough volumes. The company took up the challenge and launched the UNITON EV-ST71, a 2 x 50W quality stereo plain head amplifier from 1971 (the serial number of the review object is 6600). He also told me that the person who was responsible for taking care of the old documents, had passed away four years earlier, and that suddenly they couldn’t trace back any original document on the amplifier. So I had to do without. I wished them beautiful autumn (this was in August 2020) in Regensdorf, roughly 250 kilometers to North-East of Geneva.

In the 1970s, there was a strong boom in Switzerland to convert bars and restaurants into discos. That generated a demand for a suitable and economical power amplifier to drive the disco’s two sturdy stereo speakers at the edge of the ceiling.

In the late 90s, I visited Geneva at ITU (Internal Telecommunications Union) head quarters for international meetings on teletransmission development and specification (ITU Search Group SG13), as the representative of Finnish Telecom. I still remember one evening when we visited an astonishingly beautiful Rhododendron park near the center; it made me a big effect maybe because my own attempts to grow Rhodos in my summer house weren’t that successful.

New projects always require a period of focusing before the work can begin. Once the curiosity had grown big enough, I took heart from the amp and opened the cover. The amplifier is a quasi-complementary push-pull construction with 2 x 2N3055 (quite new incomers at that time) power transistors per channel, driven by a fairly complicated circuit (three transistor end-stage compound at each side of the output pp-feed and the related driver circuitry) on plug-in cards, one per channel. 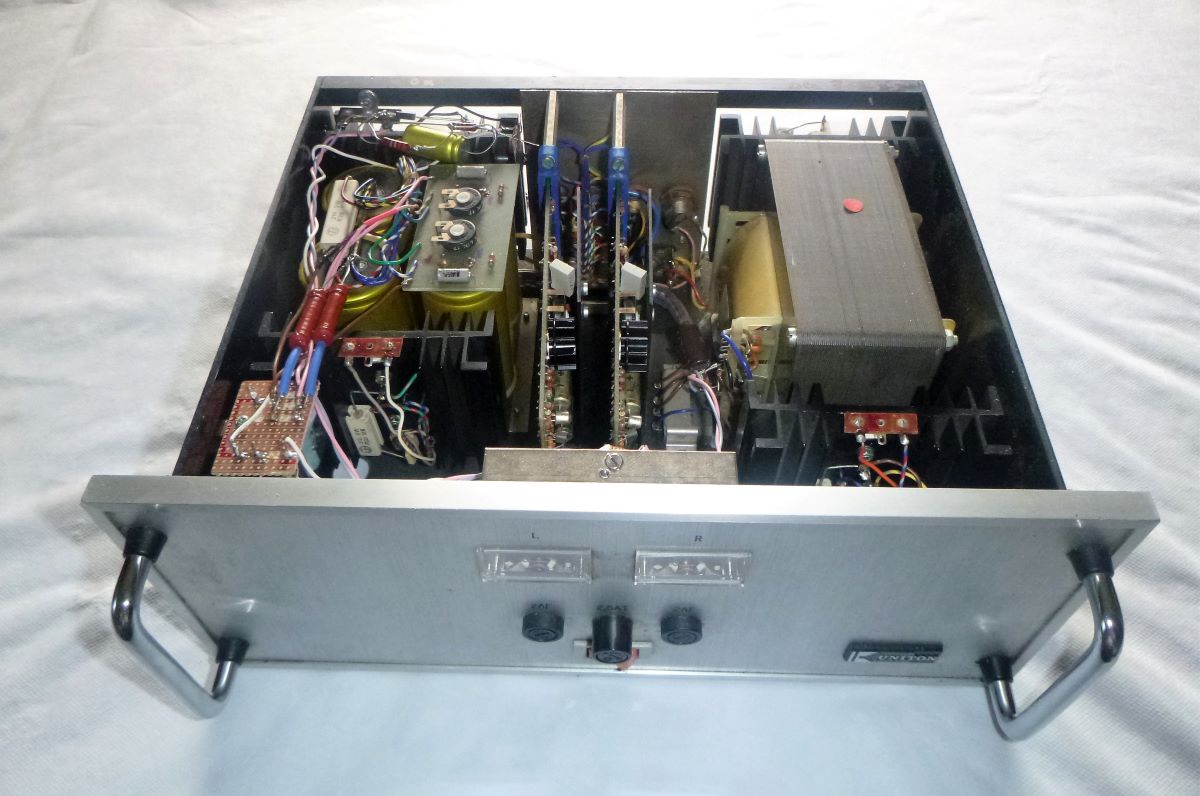 The power supply is uni-polar with a 2 x 20000uF CRC filter, and this needs the obligatory DC-separation of the speaker with a biggish capacitor (5000uF here). The supply voltage is 70V and the mains transformer is huge with respect to the modest (with a today’s norm) output power, some 250VA of iron stack is my estimation. This topology also typically introduces a start pop at the loudspeakers, and towards the end of restoration I finally added a delay relay (about 5 seconds) to eliminate this.

The back plate has 5-pin asymmetrical DIN (Deutsche Industrial Norm from the sixties) input connection with independent channel level potentiometers, apparently meant to be connected straight to DJ’s mixing console with about 0,5V input sensitivity (if I am asked, unnecessarily low from the hum point of view for the interface). Outputs are normal 6,3 mm jacks, usual in PA (Public Address) systems at that time and still today, see picture 3 (the picture from back here).

Ever since I have circulated the amp in my various hifi systems, and continued to enjoy its non-fatiguing sonic character. To be honest, I didn’t expect the sound to be that good from a quasi-complementary design of the early 70s.

One of the four power transistors was broken, and the rest had unexpectedly low current gain, around 20. So new matched replacements, MJ15003G, took place. I also made an in-circuit test for all semiconductors on the loose driver cards with a traditional analog universal meter; a 4-step resistance measurement reveals 90% of transistor and diode (two steps for diodes) faults in addition to polarity, without unsoldering anything. The measurements showed, that all other semiconductors were probably OK. One driver transistor had earlier been changed (different brand), and there were signs of burning on the card surface just underneath one (changed) power resistor near the driver.

This simple multimeter test is one of the useful tricks my highly skilled colleagues taught me when I started my profession in the line transmission equipment repair center of the Finnish Telecom as a novice engineer long time back. The next 12 years, when heading the service activities, was time for learning practically everything possible. It was a great school to later encounter  and solve all kinds of electronics-related and other problems, logically but with intuition. At that time I also started systematical failure rate recording and statistics on the transmission equipment repairs at the component level. That became a valuable tool in negotiating with the manufacturers on circuit design anomalies and warranty aspects. 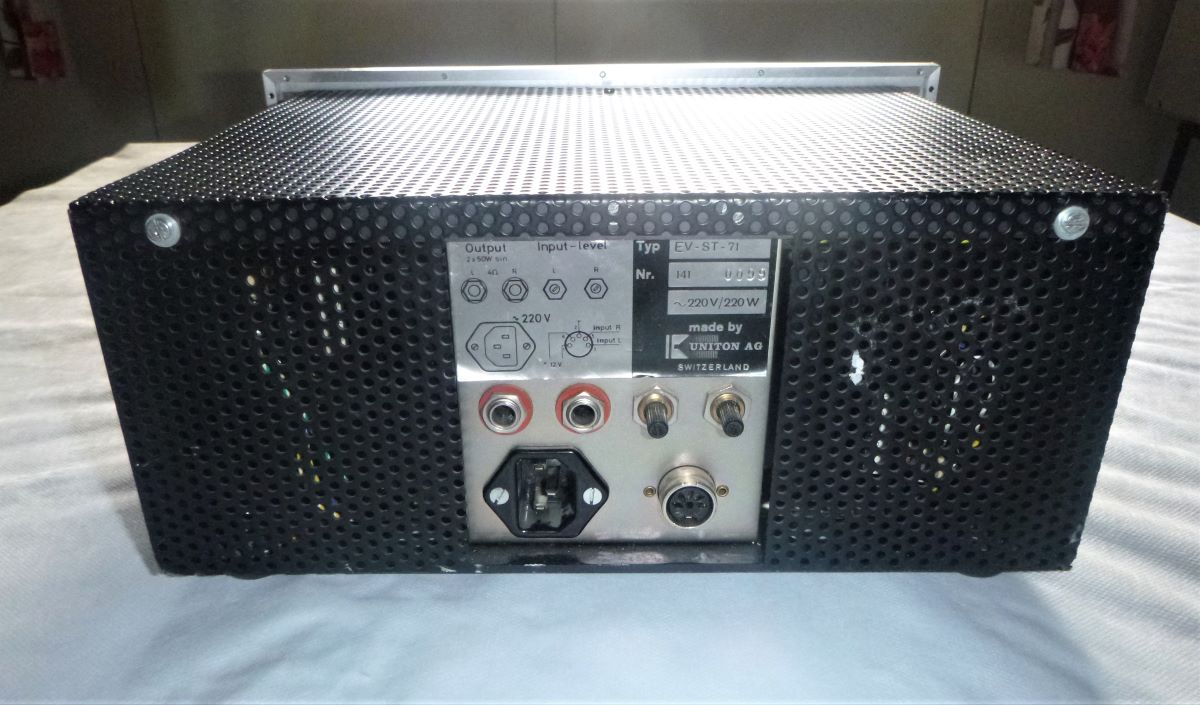 Back to business. The power supply was fine, and so was the circuitry very likely, and yet, no life! I didn’t loose hope, but understood that the rescue operation required quite a bit of further studying. When I was close to give up, the reason for malfunctioning finally revealed itself: the male connectors for the cards in the chassis had two-sided fork pins, 24 pcs overall in each. The cards themselves had no proper connectors, but the gold plated foils at the card end (one side only) served as the connections. The end side edges of the glass fiber cards had not been rounded and when being pushed too hard to their places, had widened up some of the male contact metal forks so that they had lost any spring force resulting in broken contact. There was room enough to work on this without loosening anything, and I managed to tighten carefully the spring force of all the forks from both sides with a thin sharp steel pin, one by one.

And so it happened: the amplifier begun to sing Maria Callas with a very pleasant voice! Ever since I have circulated the amp in my various hifi systems, and continued to enjoy its non-fatiguing sonic character. To be honest, I didn’t expect the sound to be that good from a quasi-complementary design of the early 70s. 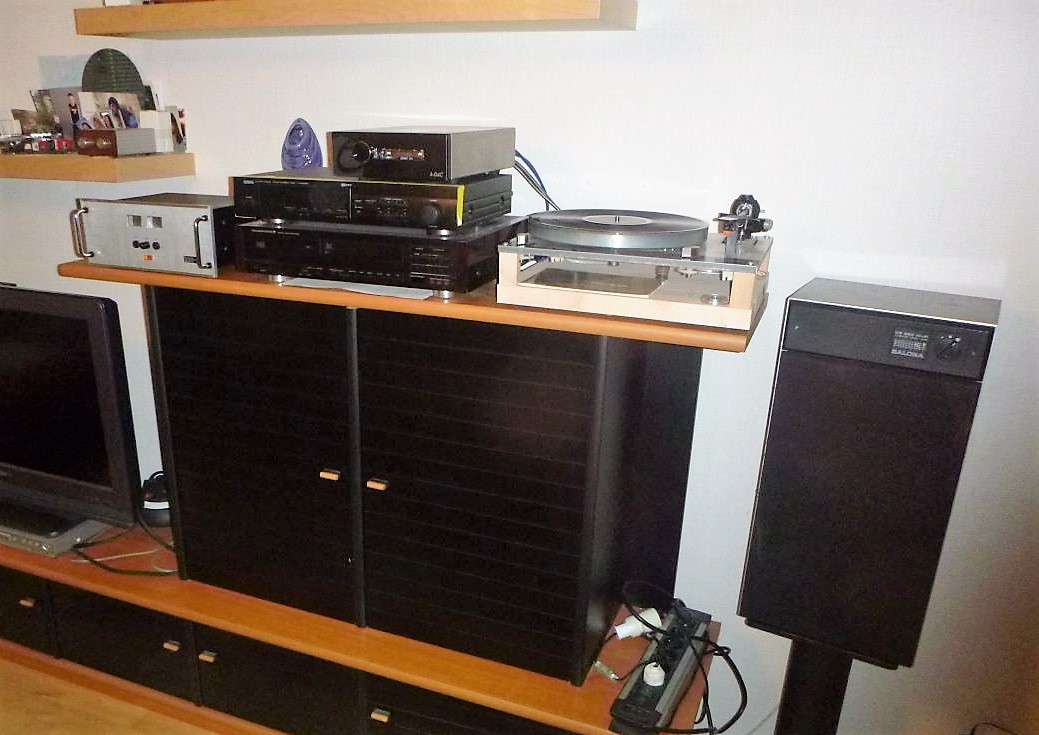 I noticed very low hum, not really disturbing, and certainly not an issue in a noisy disco. This can be an original feature due to the simple power supply, but can be also due to aged electrolytics, although they all are from Rifa, Sweden. In my experience, Rifa components can easily serve 50 years without problems. I didn’t want to change them since it would have changed the spirit of this rare UNITON piece.

A couple of basic measurements revealed over 50 kHz of power bandwidth (I had removed the simple input RC filter of 20 kHz), and THD under 0,2% at 1W/1kHz: not a bad result given the time of its appearance.

While repairing the amp, it occurred to me that that Motorola’s European laboratory group on voice technology was situated in Geneva around that time. In excess, I have read from the net, that the legendary audio amplifier designer Erno Borbely worked for this lab back then. However, he does not appear as an author of Motorola’s ‘Audio circuit design’ book, published by this Swiss design lab later in 1971. But. I’ve got another book in my collection: ’Halvlederteknikk’ from Norway (mine is the Finnish translation from 1973, the original is from 1969). In the book, the chapter ‘Common circuit technology/low frequency amplification’ is written by Mr. Borbely. You see where I’m getting at? Well, when studying and analyzing (without any schematic) the UNITON circuitry, I compared it to Mr. Borbely’s description on the quasi-complementary end transistor triplett with a good thermal stability. There’s some apparent similarity, even the detail regarding two thermal compensation silicon diodes in series fitted to the end-transistor cooling plates.

Be as it may, to me the UNITON power amp represents a rare and interesting case of long-lasting professional know-how in audio design in Switzerland (eg. Revox/Studer, Nagra, Thorens).