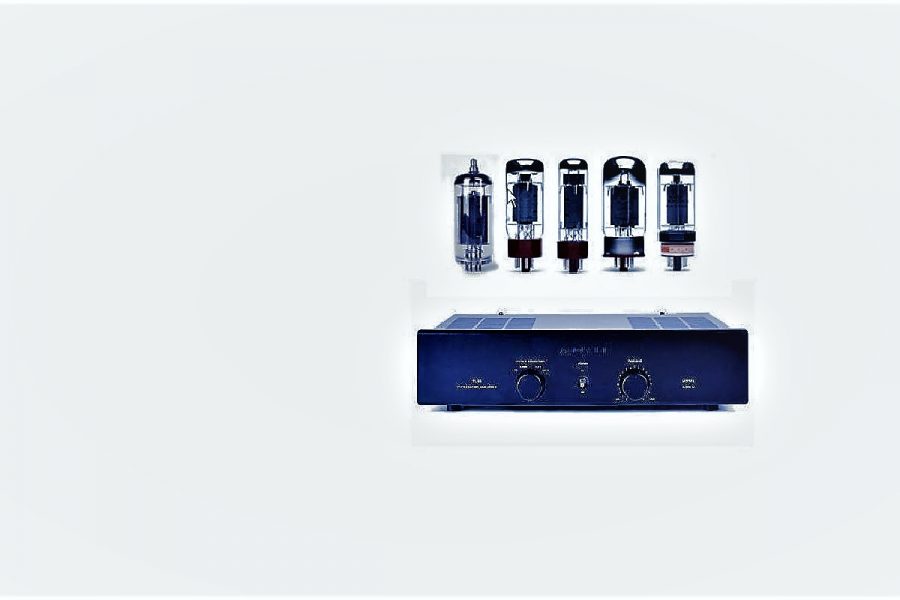 Stay tuned with the tube 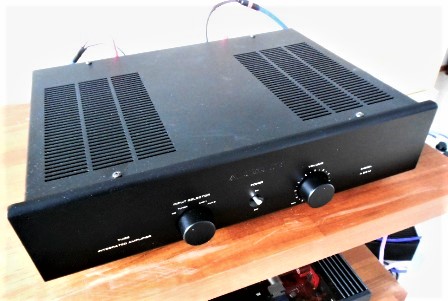 It is not that often any more that I’m given a chance to review a device that is made by a company entirely unknown to me. Well that happened some time ago,  and it did when Audolici’s A1/25 integrated tube amplifier arrived at my door steps. I’m glad that it did.

Audolici? Based in Porto, Portugal, and founded in 2007 by a group of private investors, and as a join venture with Portuguese R&D institutions with audio expertise (eg. INESC Porto & InovCapital). That was the story back then. Seems that the company has legs not just in Portugal.

The brain behind the company is the head technical engineer Valeriy Kuchkovsky, who for the 20 years or so has developed audio devices and their prototypes, some already in the former USSR. Using the provided R&D capacity and the experience of its head designer the company aims at creating “exciting new audio products with superb audio quality”.

“New products with superb audio quality” is an honourable goal but not, I’d say,  unique among audio manufacturers. But, additionally, Audolici aims to produce good sounding sound reproduction equipment, which “combine tradition and innovation”. That ain’t so original either but the particular way, in which the company pursues this second goal, is.

Audolici aims to produce good sounding sound reproduction equipment, which “combine tradition and innovation”. That ain’t so original either but the particular way, in which the company pursues the second goal, is.

You see, Audolici’s design philosophy was born from the observation that the majority of today’s valve amplifier designs “lack the legendary character of classic valve designs”. Wow! My impression is that a vast majority of tube amp manufacturers over the past 30 years have tried to do exactly the opposite: get rid of the “classic valve sound”, whereas Audolici’s objective is “to restore the typical sonic character of the 60/70’s valve designs coupled with modern innovations; managing to achieve the legendary vintage sound, yet faster, more detailed and extended in frequency response than vintage Luxman or Dynaco designs”. That’s the kind of objective that I haven’t seen coming from the pen of tube amp designers for a long, long time.

According to Audolici/Kuchkovsky, most classic valve amps of recent times use strong, current heavy valves: 12BH, 6884, ECC85, ECC88 and similar. According to him, the problem is that current heavy valves make it very difficult to achieve speed because they are heavy for the power supply. To make the life easier for the power supply, and also for achieving good transient response speed, Valeriy Kuchkovsky matches the output tubes with such Russian old stock military standard valves as 6N1P and 6N2P.

These driver valves are paired with Russian old stock 6L6 valves for the Jazz model, with Electro-Harmonix EL34 for the Blues model, and Svetlana 6550 for the Swing model. With the choice of the output tube Audolici wants to reflect the fact that each tube has a special fluid and crisp sound character corresponding, not just to certain sound characteristics, but rather uniquely I’d say, to different styles of music all together. Honest talking.

Audolici also claims that it uses modern technology for the production of its  transformer cores “in order to obtain a more effective induction for the given size/weight, thus delivering extended bass response and dynamics as compared to conventional transformers”. The transformers also feature a low parasitic induction factor.

All Audolici models are handmade & hand-numbered in Portugal. 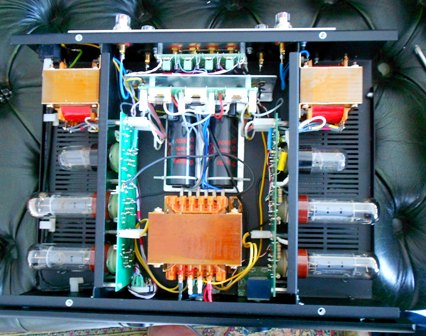 More importantly, Audolici only use tubes from the suppliers that are known for their top quality including Reflector/Sovtek, Svetlana/SED and Kaluga. Every tube is said to have passed a rigorous quality control with military standards. As a result of the selection process, Audolici expects to find in its tubes (i) a minimum level of microphonic effect, (ii) a very good signal/noise ratio, and (iii) reduction of external artefacts and environmental disturbances. The quality of the glass (high resistance tube bulb glass), for instance, is important in letting the vacuum tube reach its maximum lifetime. 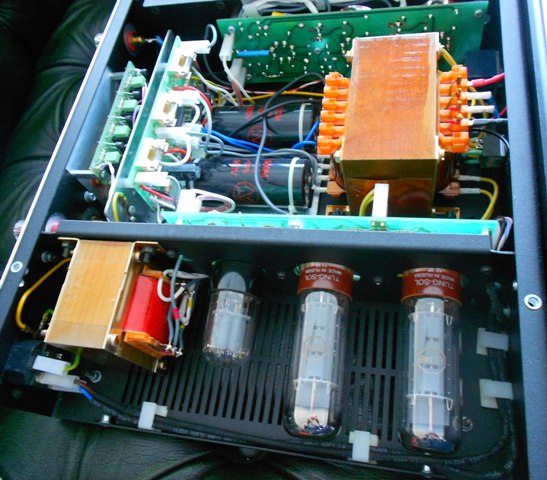 The A1/25 integrated amplifier

Of the two Audolici integrated amps, the A25 is the less expensive one. Here too Audolici makes use of its “advanced technology” but “based on the best tradition of tube construction practices from the 70´s”.

The first amplification stage is an input amplifier. It is realized with one double triode 6SL7 (Russian “Tungsol”) as a common cathode-resistive loaded amplifier. This stage combines two signals from the input and from the feedback grid. This stage is directly coupled with the input source and by one pair of precision polypropylene axial capacitors with the power stage.

As to the second stage, the phase shifter, two identical inverted output voltages are configured as a “long tale” delivering all necessary voltage swing to control the grids of the power tubes. The output stage is a ultra-linear configured “push-pull” Class A design (not sure how the Class A operation is guaranteed)  with one pair of power tubes: the 6L6GC in the A1, and EL-34 B (Russian “Tungsol”) in the A1/25. According to the specs sheet, zero overall negative feedback is used.

Each output section is equipped with a bias adjustment trimmer for individual approximation, eg. when tubes require replacement. Audolici estimates the life time of its 6SL7 be approximately 10 000 hours, 5000 hours for the 6H9C and 3000 hours for the 6L6GC/ EL-34. A new tube kit of matched tubes of the same brand is available from Audolici.

Output power from the power tubes is conductively applied to the load through the output transformer, designed as a precision conductor between primary and secondary winding with minimal leakage and internal impedance. There are no taps for different load impedances. The amp is available either as a 4-6 ohm or 6-8 ohm versions. The binding posts are of WBTs.

The power supply houses a high-efficient 280 VA power transformer (E/I type of core) and aluminum electrolytic (2 x 500mF/500V) PS capacitors. Only full wave rectification process is used at the DC voltage sources. A special LED-indicated toggle switch will guarantee that the amplifier has the best “Turn ON” process and reliability during all time of use.

Audolici’s objective is “to restore the typical sonic character of the 60/70’s valve designs coupled with modern innovations; the legendary vintage sound, yet faster, more detailed and extended in frequency response than vintage Luxman or Dynaco designs.

Having seen the innards of quite a many tube amps, I really liked what I saw inside the A1/25 solid chassis: all parts and components (MKT polypropylene capacitors, carbon resistors 0,25-2W etc.) in a very good order and neatly placed in their positions, tubes horizontally inserted on both sides of the strictly dual mono power amp section. The quality of the work appeared to be impeccable.

Operating the A1/25 was straightforward. The amplifier needs to heat up  approximately 3 minutes for the tubes to be at their best working temperature.

Two features drew my attention. One, the rather low input sensitivity of 1,57V made the volume pot often go well over twelve o’clock even with a CD player and sensitive loudspeakers. There’s no way this amp can deal with analogue sources with less than 500mV output voltage.

Second, the SN ratio is said to be -89dB (not sure if the figure is weighted or not), which I think can be considered as a fine figure. There was no hum at all but from a close distance I noticed a weak buzzing noise coming from the speakers, the origin of which remained unknown. Since I couldn’t hear it to the listening seat, I ignored it. 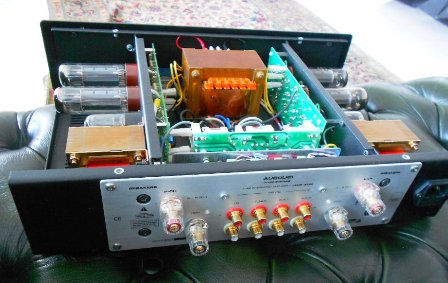 Audolici strongly recommends 100 hours of music playing for the tubes, capacitors and output transformers to fully settle in for the peak performance. If not, the A1/25 may sound “sterile or thin”. And indeed, I observed that the amp pumped more air into the sound and delivered tighter bass toward the end of the break-in period.

Throughout my listening sessions – with a 97dB sensitive single driver speaker and two mid-efficient 2-way monitors – the impression I got of the A1/25’s overall music making capacity was largely positive; the experience was not indifferent (some mistake indifference for a sign of neutrality) but truly positive. I felt that something good, something atypical was taking place.

As for the coherence, solidity and wholesomeness of the sound, Audolici A1/25 reminded me of my A-Sound modified PP 6V6 amp, and that to me speaks strongly (because of years of experience with my amp) for the A1/25’s ability to produce a very competent and musically involving sound.

The A1/25 added not incorrect nicety or pleasantness to the midrange without twisting the naturalness of the tone. It had a non-fatiguing treble, and overall, a fast dynamic sound that didn’t make the speakers spread the sound all over the room but well mapped in between the cabinets.

The A1/25 added not incorrect nicety or pleasantness to the midrange without twisting the naturalness of the tone. It had a non-fatiguing treble, and overall, a fast dynamic sound that didn’t make the speakers spread the sound all over the room but well mapped in between the cabinets.

At first I found it hard to say this or that about the amp’s effect on the bass department, but comparing the A1/25 to a SET 300B at hand proved at minimum that the bass produced isn’t weak by any standard. However, I’m sure the quality of the bass will vary along with the speakers used.

Voxativ-based wide-bandwidth speakers may not be for everybody but it cannot be denied that they are excellent for revealing whether an amp can or cannot bring to life music’s delicate moments and the tiny, tiny but significant sonic details. I think the A1/25 did genuinely good work in this regard (resolution) albeit not in the way the SET 300B did. Because of the EL34 output tubes the A1/25 is nicknamed Blues (perhaps because many blues guitarists use EL34 amps), and I felt not unjustifiably. The A1/25 was able to shed light on more complex and demanding music but not as brightly as the 300B did. Whether small scale vocal music or contemporary art music, I’d probably let small power triodes shine. But if it’s BLUES, broadly understood, deep down in its soul the A1/25 is a blues amp. 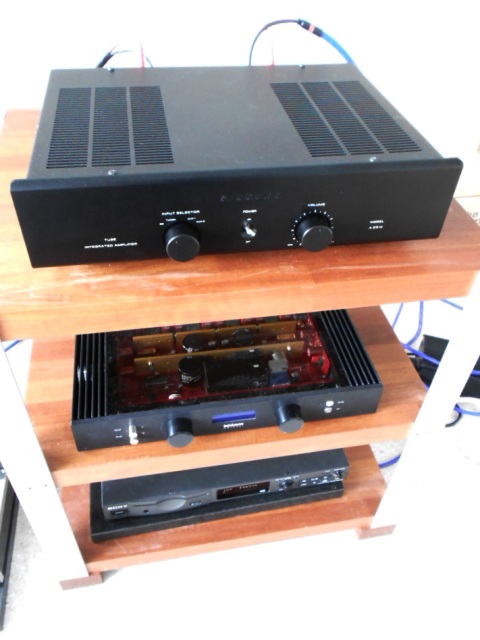 An amplifier of this quality needs a loudspeaker that compliments its virtues. As a 25 watter the A1/25 benefits from higher than average efficient speakers so that normal power levels remain low and the amp is under no strain. The output impedance of the A1/25 is below 0,5 ohms, so no frequency response problems are foreseen here.

So here’s what I think about the Audolici A1/25: it’s a technically solid no NF Class A PP tube amplifier with sound that can prove to be success with a suitable pair of loudspeakers. And I would take seriously the possibility to order the amp with output tubes that match one’s music preferences. At the time of the review the price in Europe was around 4000 euros, but I have no info what it cost today.