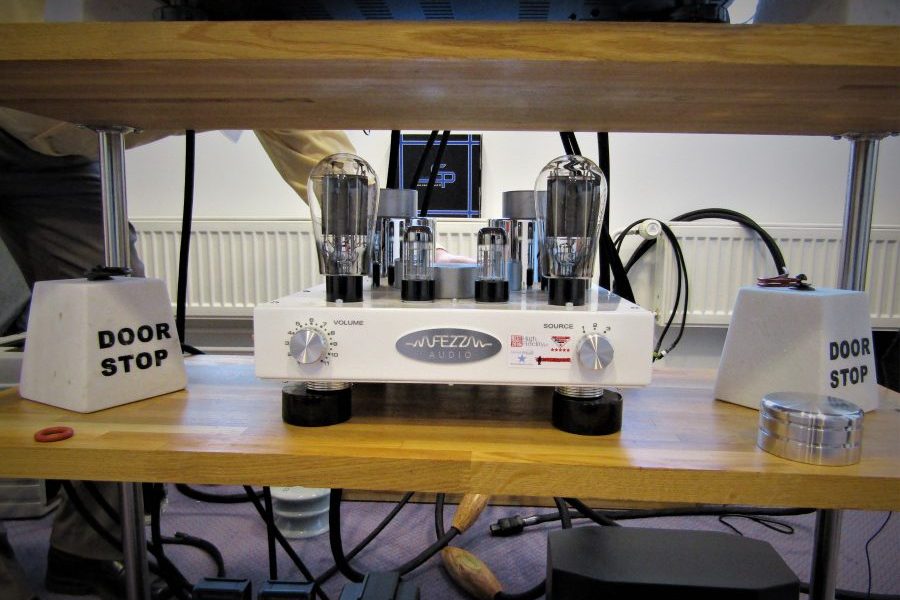 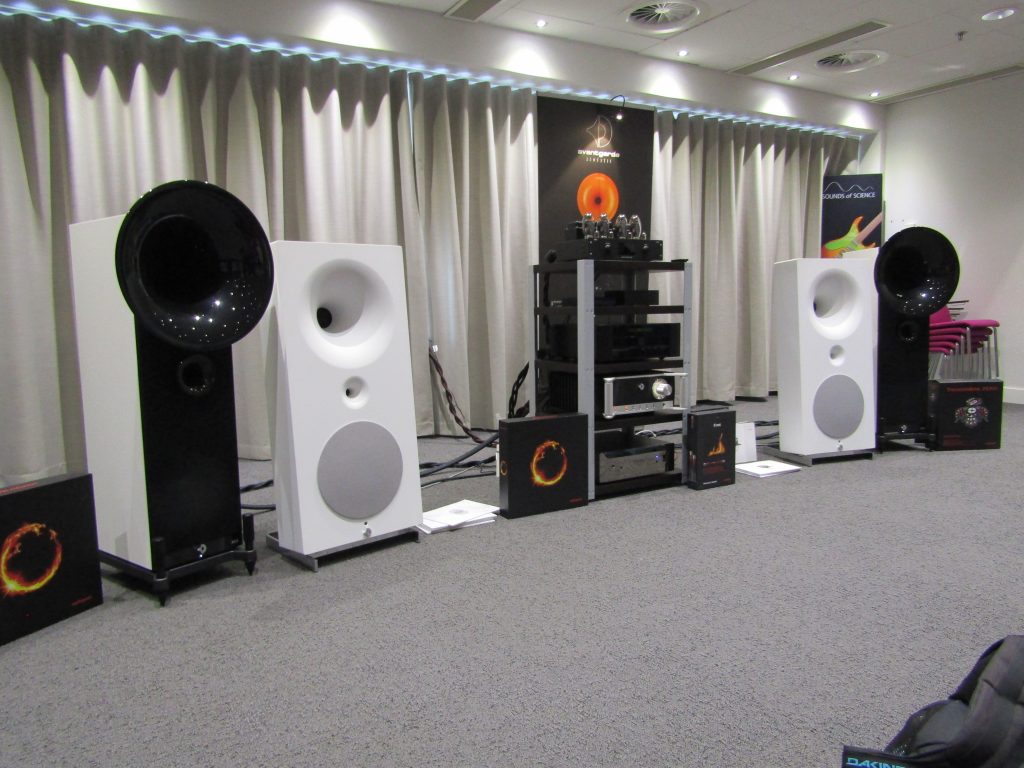 Avantgardes impressed many last year. This year it was the UNO XD’s turn. 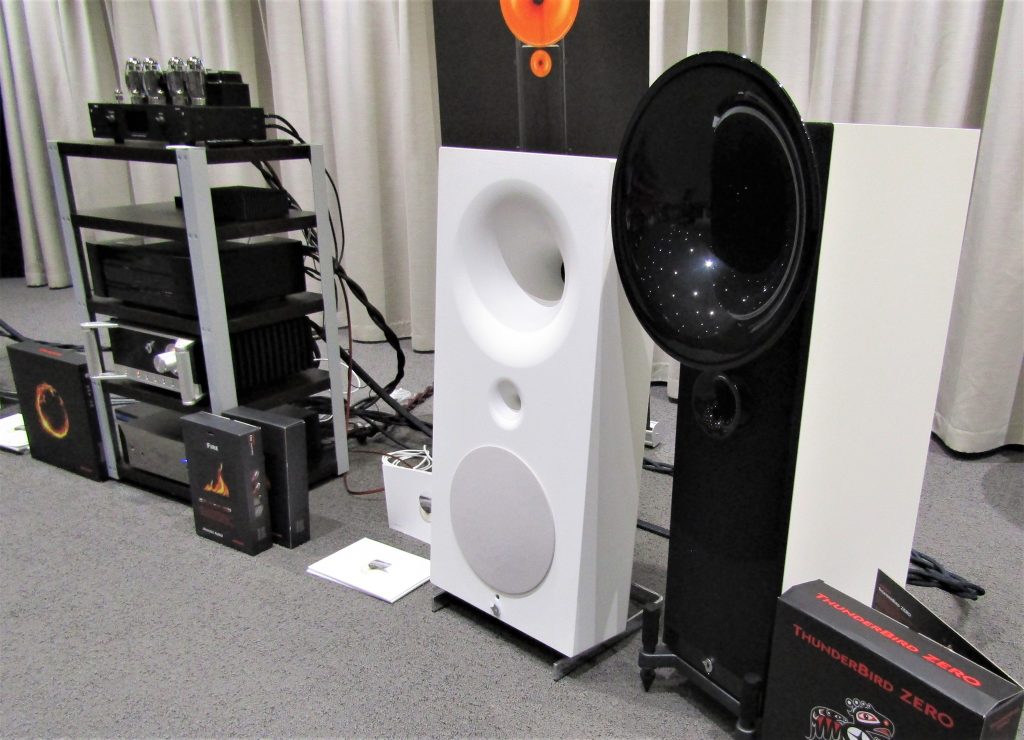 Amped with either Avantgarde’s own integrated or this tube beast by LB12. 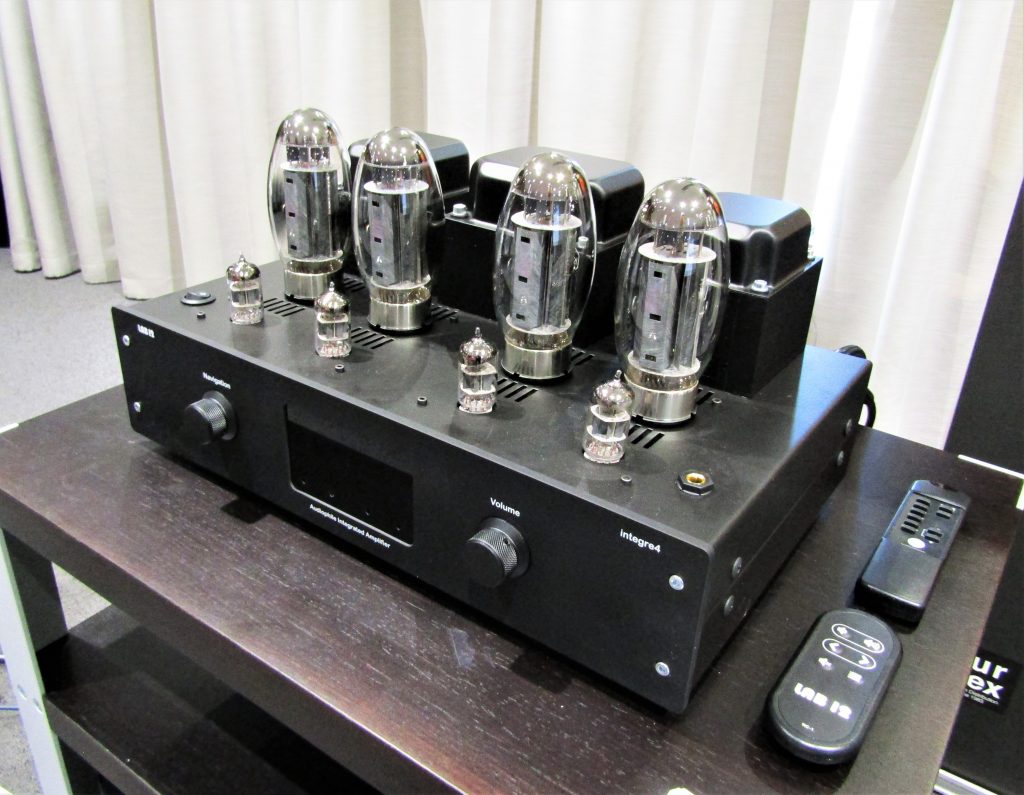 Long time back, before commercial radio business, there were two or three public FM radio stations. On one of them there was a daily ‘program’ called “Stereo test”: with the guidance of a male voice listeners were asked to check that the left and right channels came out right, and that the phase was right, ie. the sound was not coming “from a vague direction”. More advanced listeners such as Hi-Fi hobbyists used the stereo test for evaluating the system/speakers tonal character and accuracy by assessing the naturalness of the male voice that they had heard through so many different radios and loudspeakers. This is exactly what the Harbeth loudspeakers aim to offer: natural speech sound! Once speech sounds correct to one’s ear and brain, reproducing music is child’s play. 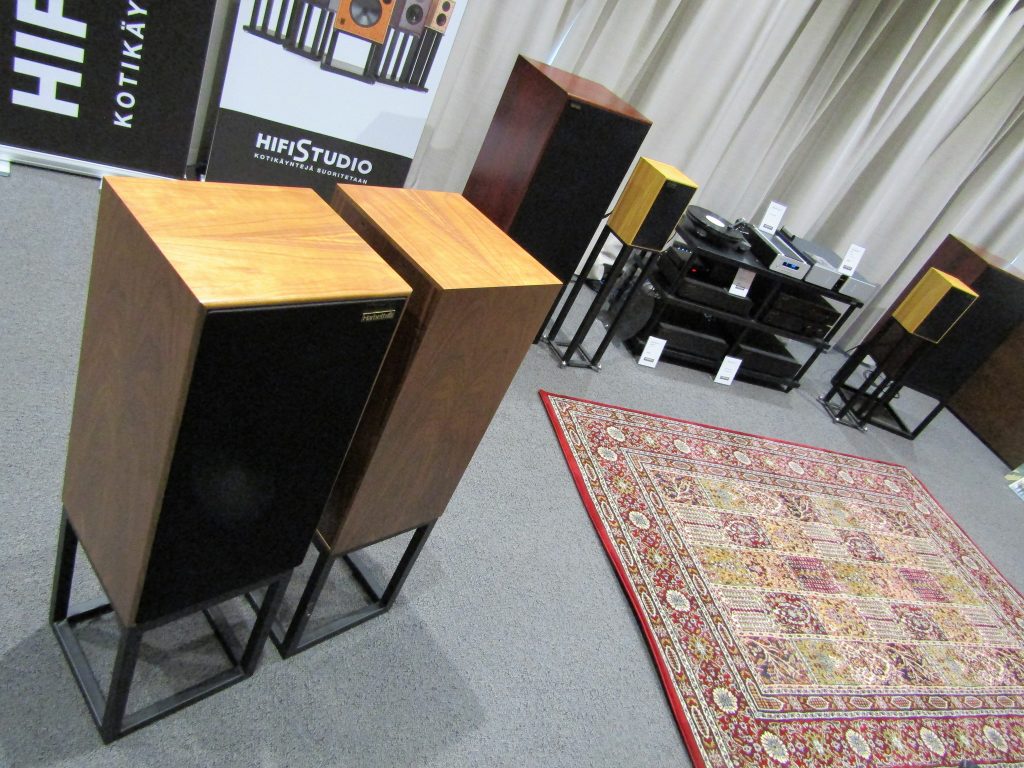 It is easy to become blind to beauty when there’s plenty of it around. The same with sound. The massive amount of techniques that go into the Focal Scala Utopia Evo speakers guarantee that the bass is correct and well defined despite the fact that under show conditions, the room tends to exaggerate the amount of bass energy. The pile of electronics is from Naim, naturally. 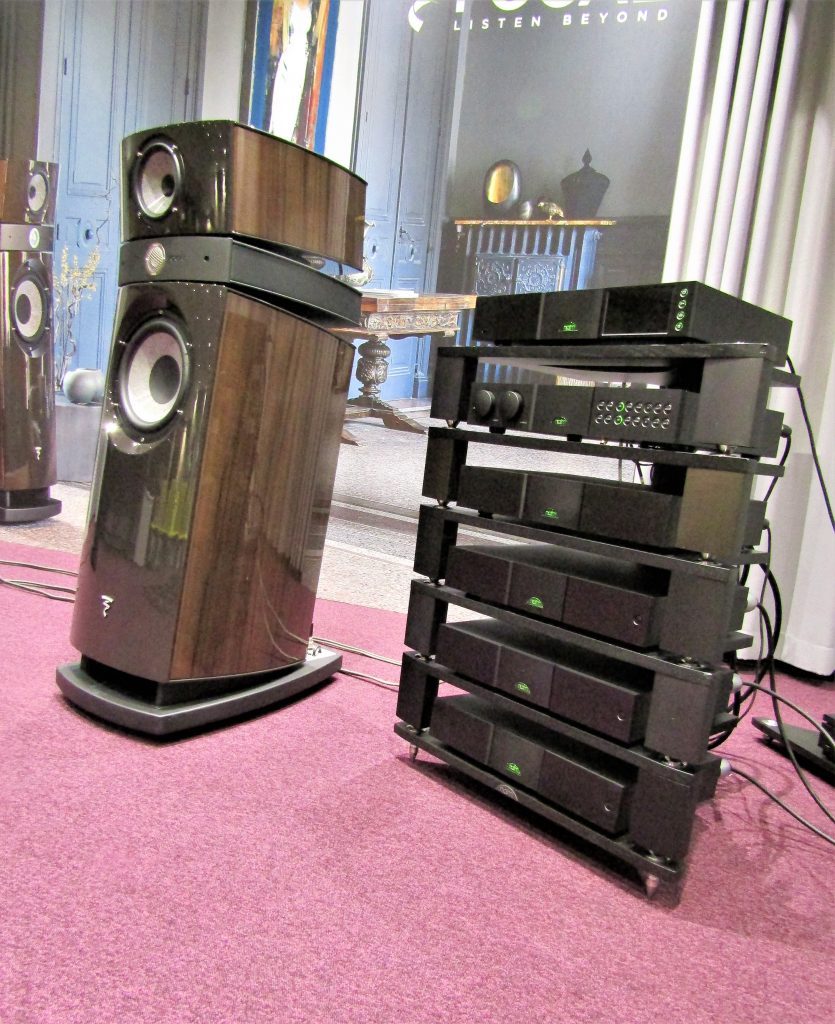 Beige (cream) is such a wonderful and appealing color in cars (vintage in particular). Why not in loudspeakers? The new Focal Chora. 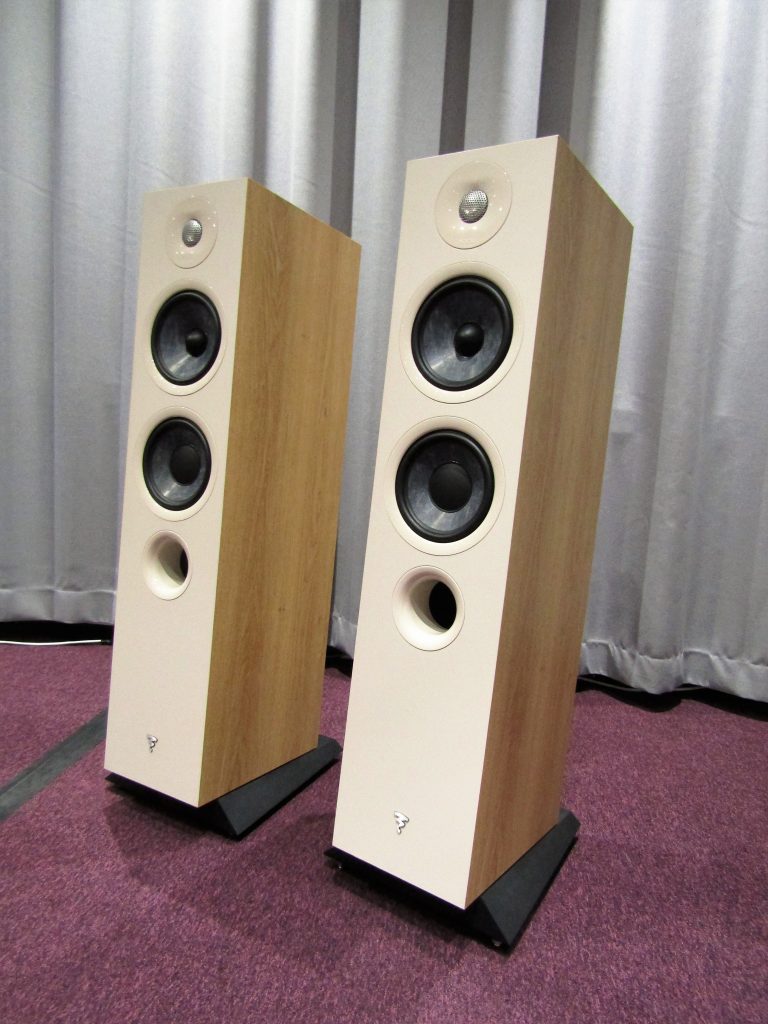 I’ve heard  the Kii Three BXT several times here and there (not under review conditions though), and never so that it would not have made me think. On one hand, the sound is quasi-perfect. But how exactly? It is it (absolutely good) by largely eliminating what is normally considered bad in sound (coloring caused by this or that reason), that is, negatively. I never forget (I keep telling this rest of my life) how a customer decades ago at a French Hi-Fi shop told the seller how he found the sound of the speaker he was listening otherwise good but not “sufficiently colored”! Obviously, he wasn’t looking for a colored sound in the sense we understand it (wide dips and peaks of the frequency response etc.) but instead believed that on top of sounding correct, the sound of a speaker should encompass some positive inner quality he named “colored”, and that he wanted to have more of that positive quality coming from the speaker at hand. But as said, the Kii Three BXT doesn’t leave much to complain sound-wise. Its bass performance is something that only very few loudspeakers can achieve. Share its axioms and premises, and you get something that is almost as good as it can get. 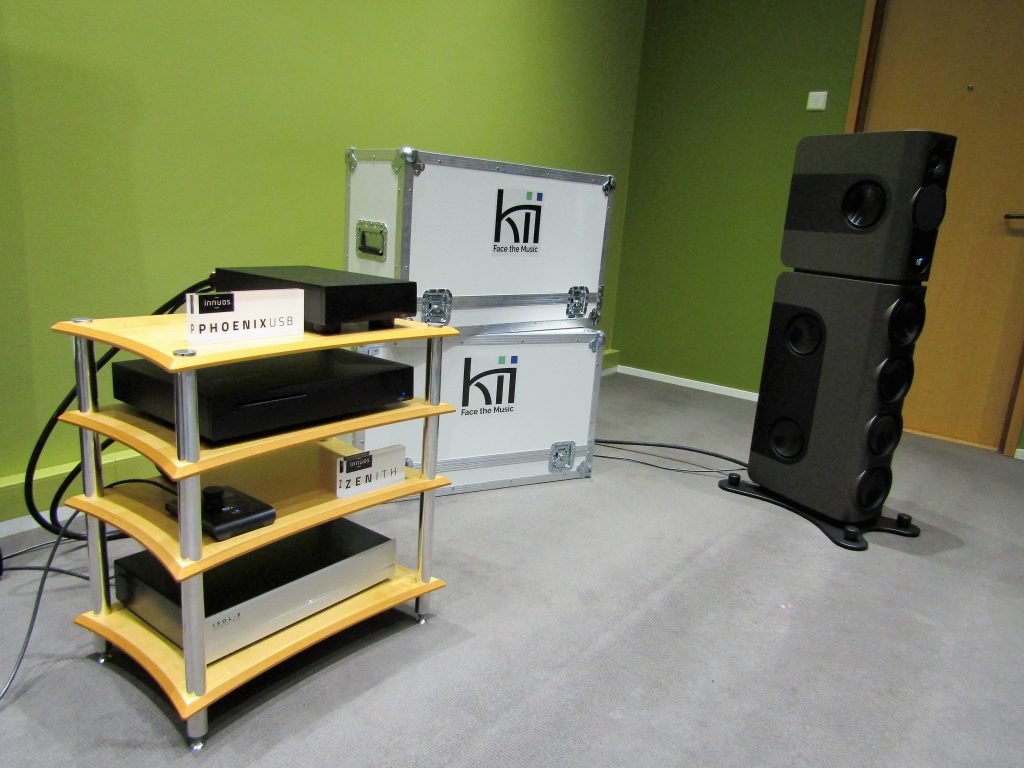 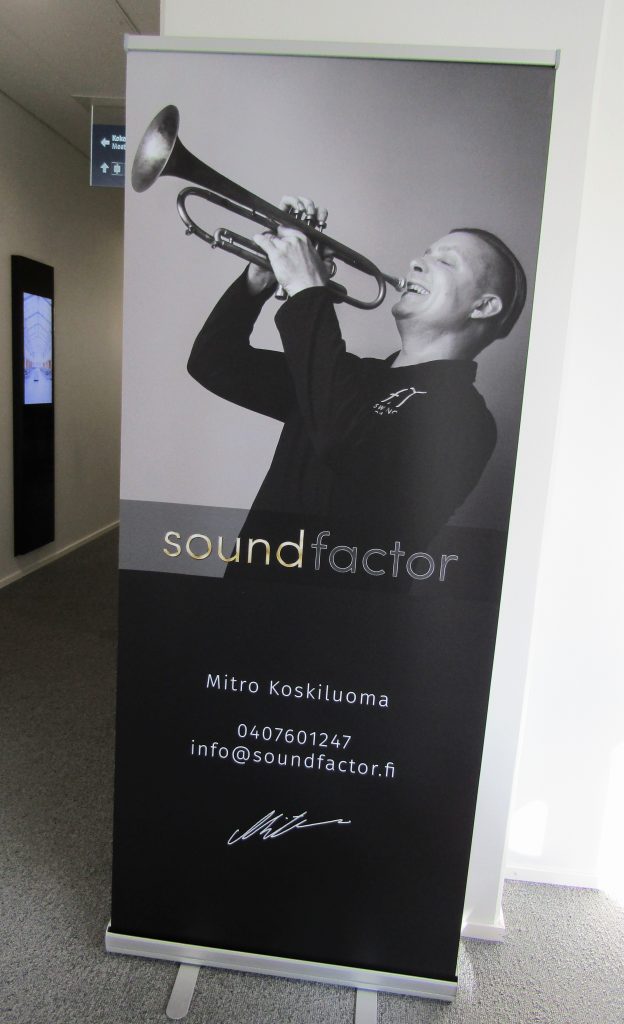 It’s rather common that the audio dealers and manufacturers present themselves as music lovers and often makers as well. Judging by the ads and website “about” sections, quite a many seem to play cello but the head of Sound Factor, Mitro Koskiluoma, is a professional-level trumpet player. It was that close that one of the two major symphony orchestras in Finland didn’t rob the man from the audiophiles. Given the extremely hard competition for each post in the orchestra, candidates rolling in from all over the world, being among the final two is quite a feather in the cap.

The new PMC flagship Fenestria has been demoed here and there but as far as I know never before bi-amped with two Accuphase A-75 Class A stereo power amps, the Accuphase C-2850 preamp and Accuphase DP-750 CD/SACD/DAC. Quite an impressive combo! 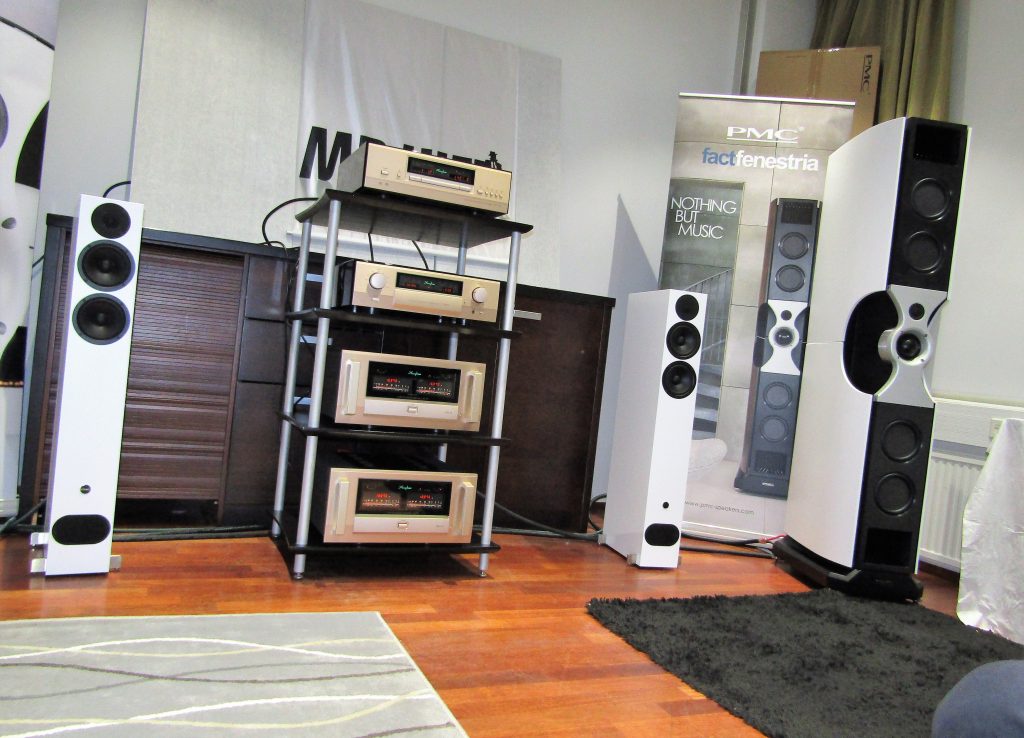 In this system the star was, depending on the approach, either the music library by Melco or Audiovector’s new impressive R8 floorstander. Or both. And Bryston in between. 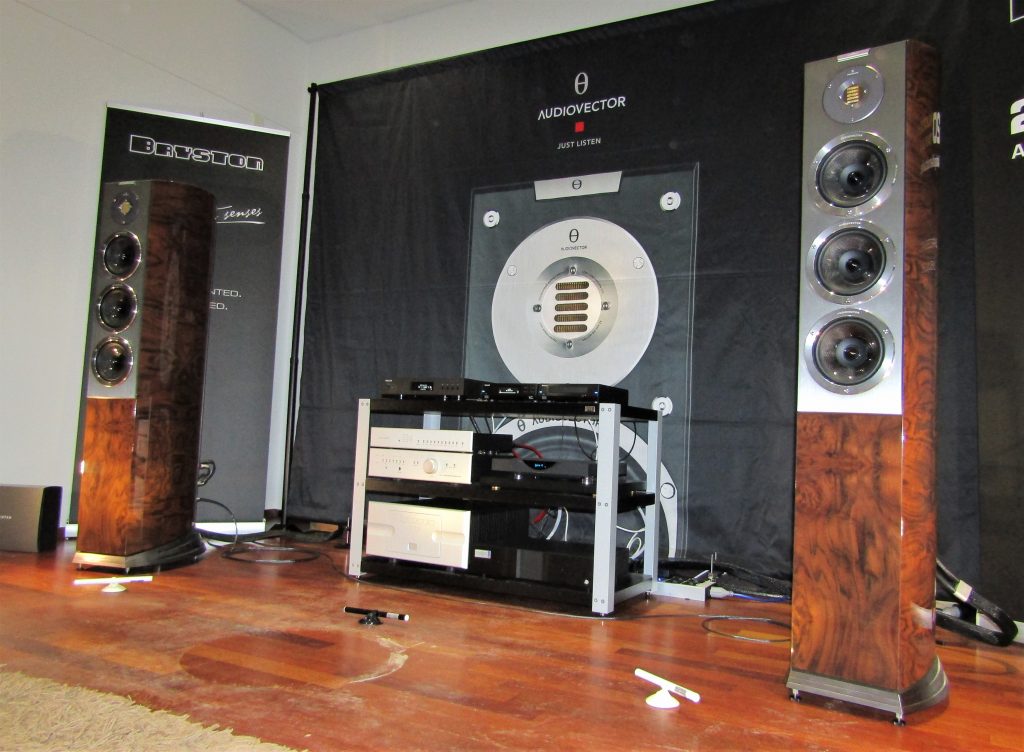 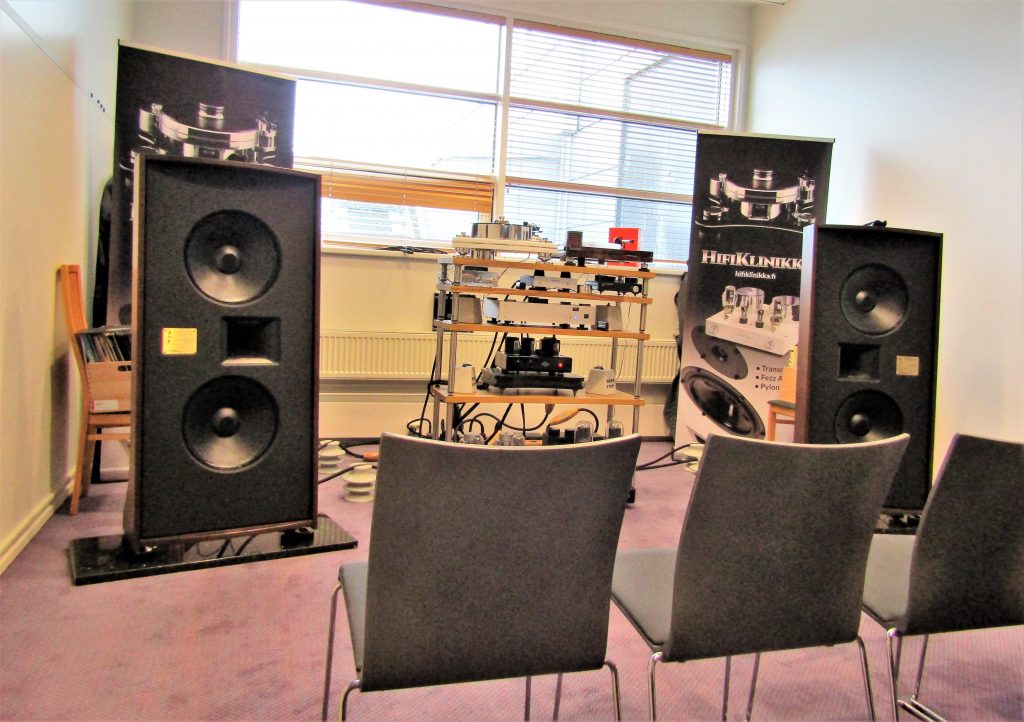 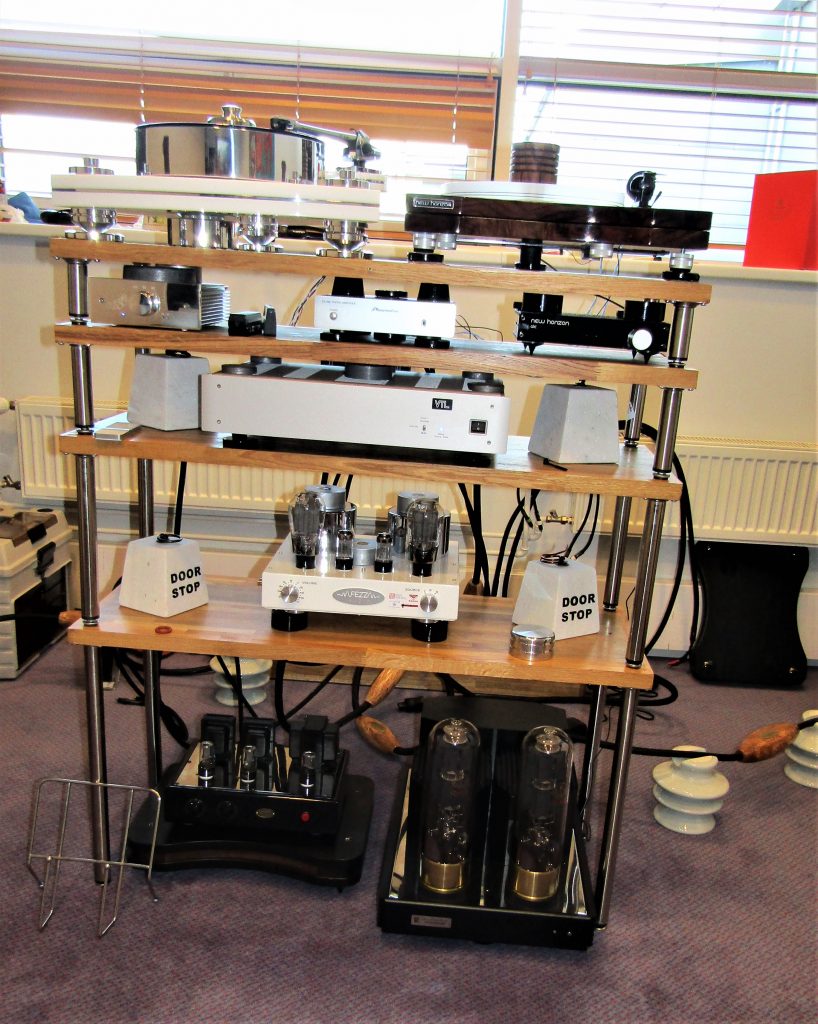 When one can totally ignore commercial aspects, the speaker will look like this (in the room of Finnish Hi-Fi Hobbyists). 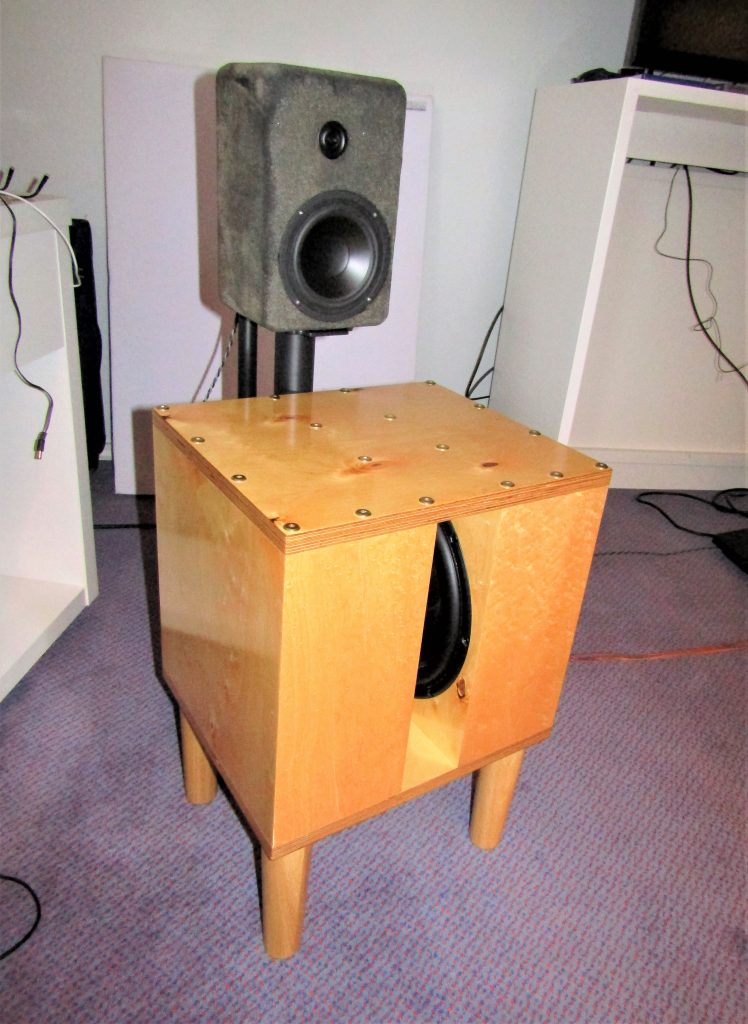 This is all about ‘indirect’ listening. That term can assume many meanings in audio. Here it means not having to be tied at the corner of the stereo triangle, and still being exposed to a splendid sound, ie. not colored, not missing anything. It is such a relief and relaxing and common sense to listen to these speakers, Larsen 8 from the Swedish Larsen Hifi, and this type of speakers in general (eg. the vintage Sonabs). Just place it against the wall and let it do its job. Not too expensive either. (The stands are not part of the deal but a result of imagination and meant to overcome the unexpected physical problem of the show room.) 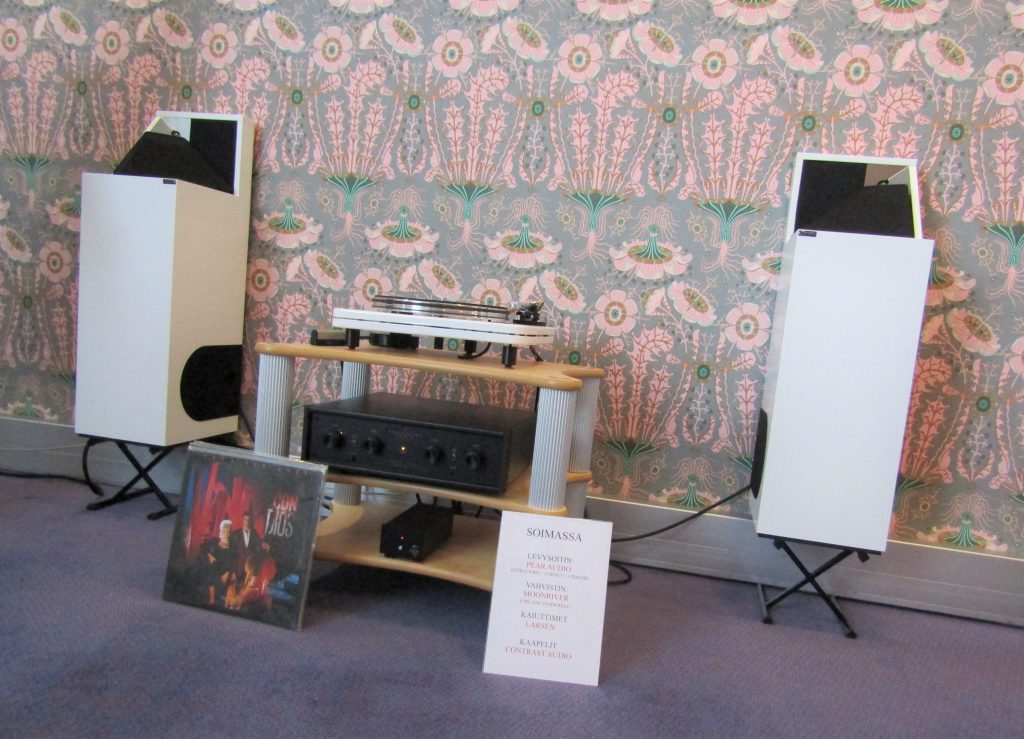 Style and techniques and synergy from Italy: Pathos electronics and Rosso Fiorentino loudspeakers. 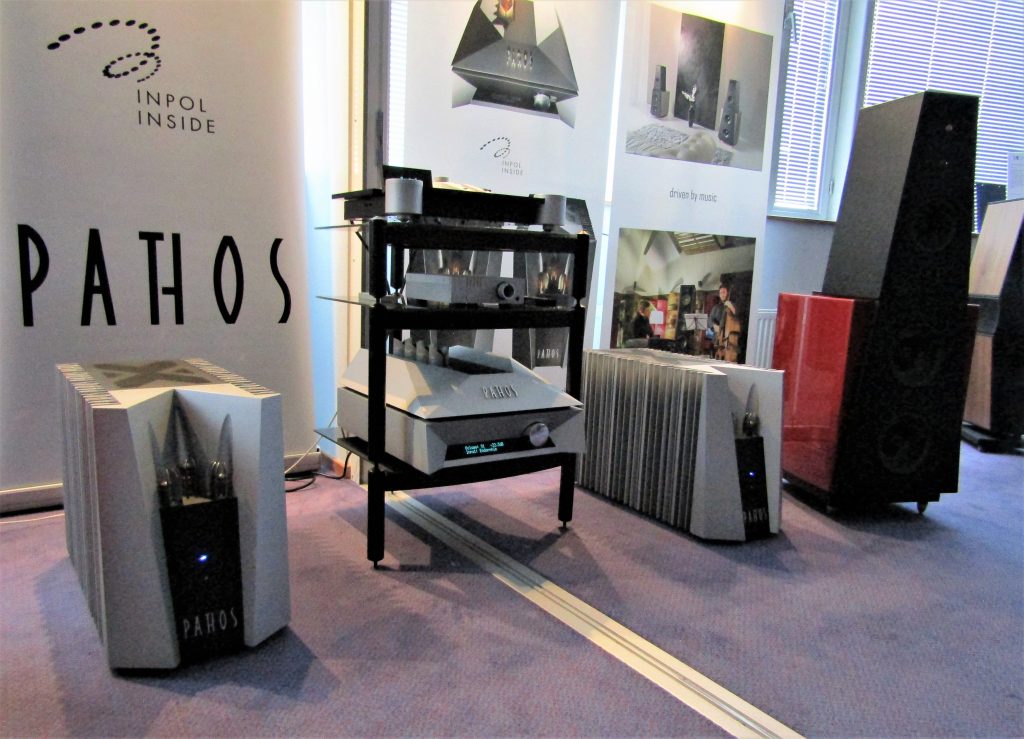 The global list of mixing/mastering studios that have decided to use Amphion loudspeakers is impressive! Here they performed together with another Finn, Anti-Mode X4 preamp/bass-room-equalizer. 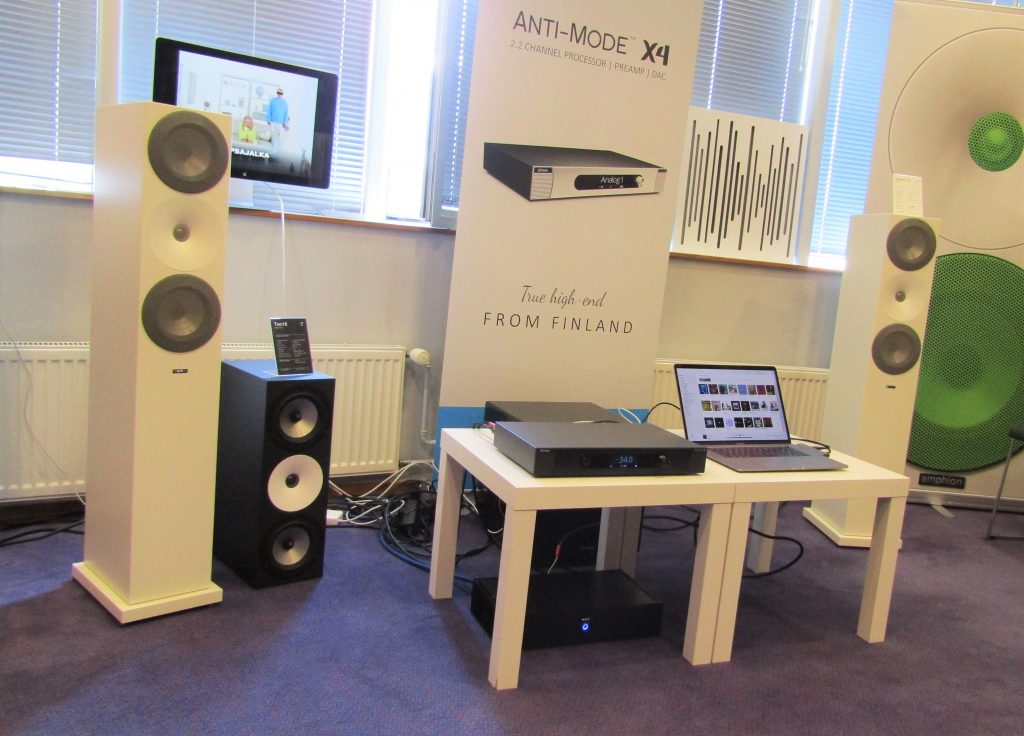