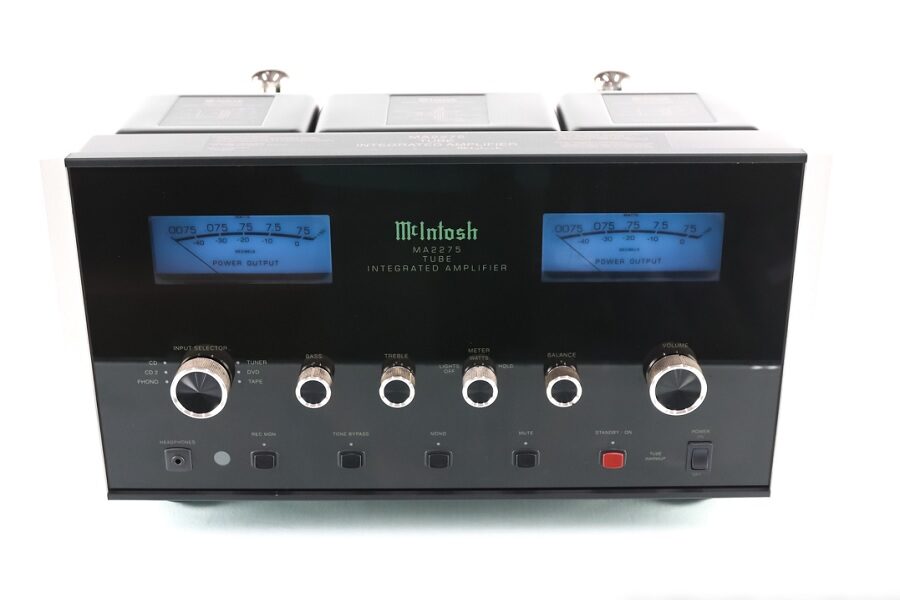 10cm x 10cm x 5cm. That’s, roughly, the size of the smallest amps I reviewed over the last ten years or so, some of them delivering up to 80 watts of amplification power. As compared to those chihuahuas of audio amplifiers, the McIntosh MA 2275 is a true Irish wolfhound. It’s massive both in centimeters and grams. Against a few hundred grams of the tiniest amps, the MA 2275 puts 35 kilograms on the table. It’s huge. It’s one thing to look at pics of the MA 2275, another thing to see and feel it in nature. Impressive!

McIntosh MA 2275 is not entirely an old design but it certainly represents the era and times when big was beautiful, and it was OK that it was. The current trend is exactly the opposite, and to some extent it’s ridiculous. Much could be said of what has lead to the MA 2275 – facts about the McIntosh history, its unique production methods etc. – but INNER has covered that subject matter elsewhere.

The MA 2275 is an integrated tube amplifier. What it integrates is the Classic 275 power amp (4 x KT88) with a modern low-noise dual output preamp stage. Like the power amp, the preamp section of the 2275 is build around tubes. In fact, the MA2275 is claimed to be the first McIntosh integrated amplifier to rely exclusively on vacuum tubes in all of its audio circuits.

The preamp section is said to be of a new design and ultra-low-noise. Instead of point-to-point wiring, glass epoxy printed circuit boards, developed through modern computer-aided design techniques, have been used. Input switching is accomplished inside glass cylinders filled with an inert gas to prevent signal degradation.

As to the power amp stage, the 2275 is largely self-explanatory – literarily. The cover of the OPTs shows how the famous McIntosh unity coupled output transformers are being wound, and their frequency range. The chassis in turn provides info on how much power the four KT88s provide in push-pull mode: the same famous 75 watts as the 275. 2,5 volts is required to have the maximum power. The tone controls allow 24dB of freedom of adjusting the treble and the bass.

This is not a standard review. I didn’t live with the MA 2275 for weeks or even days. And I didn’t listen to it as part of my current system at home. But I had a chance to listen to the amp for a day or so running speakers that I know very, very well indeed: Dunlavy Athena, and in a room that is designed for critical listening.

Right from the beginning it turned out that the MA 2275 likes to do it in a dynamic, big and forward-going way. The amp gave an impression that it has a strong intention – drive – not only to proceed in time, but also to make sense of music’s time-bound characteristics. As a result, eg. music’s dynamic variation, especially on a large scale, becomes well enlightened. Dynamically challenging piano music was a telling example.

The spacious sound was transparent but not in an analytical or conspicuously introspective way. And yet, to the extent this depends on the amp, instruments and instrument groups were nicely separated from each other. The feature I liked a lot was the 2275’s ability to unveil what’s going on in the midrange, as if polishing the area between the frequency extremes, and opening a way to a clean and legible sound. For example, the MA 2275 handled medieval music in a sympathetic way, and with a wonderful separation and abstraction of the sound sources (instruments, vocal groups) in the midrange.

The MA 2275 didn’t emphasize the depth dimension of the stereo image in a way some other amps do, one reason being, perhaps, that sheer size of the sound. Clearly the amp prefers the overall size of the sound over its 3D. Yes, the sound was airy, but spatial matters were not illuminated with surgical precision.

The bass was powerful and extended, and apart from the lowest notes, well controlled. As to the lowest notes, the MA 2275 kind of pushed the woofers of Dunlavy Athenas so hard that the speaker had troubles in keeping the low bass clean (only 4 ohm taps were tried). Don’t know what was going on here. The treble was not “extra silky” or “sophisticated” but just “natural”. Cymbals, for example, were not reproduced with “extra finesse”, but naturally. Violins were reproduced in a wide and positive way, not in a thin, sharp and dry way. This amp may not be the best choice for those listeners who prefer sophistication even if it were presented artificially.

The amp was at home with with non-classical program material; in particular, with good sounding recordings the performance was absolutely high class, balanced and impartial. The amp tends to bring music/sound to the front of the speakers, and therefore makes one be careful with the volume setting. The MA 2275 appears to sound kind of soft, but its softness is one of the kind, perhaps to some extent typical to all McIntosh tube amplifiers.

Here’s something that may be essential. No matter how fine the sound through the Dunlavy Athena was, it might not be an ideal partner for the 2275. My explanation goes like this. The Athena is such a competent loudspeaker that it does not need the qualities of the 2275 in order to sound great. Thus, with this speaker the resources of the MA 2275 were partly wasted. Somehow I felt that the MA 2275 would have preferred more challenging speakers to work against (some idler-wheel turntables run against a mechanical brake attached to the spindle). Perhaps the MA 2275 didn’t get to show where it’s best: in making a speaker with a complex load, average sensitivity, constrained sound world etc. to excel.