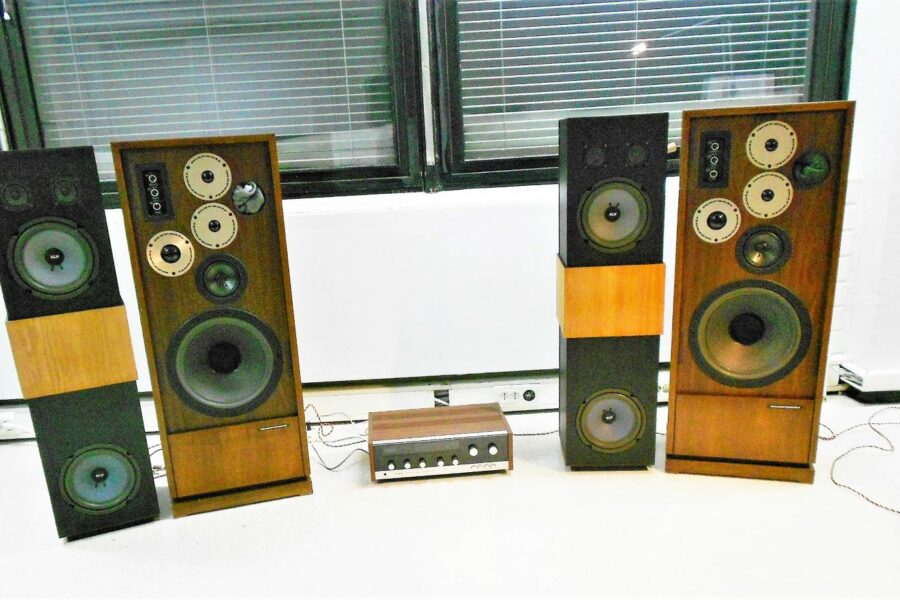 I know some people will get heart beats when their eyes hit these speakers. Then there are others who are not touched at all, including many who otherwise like decades-old hi-fi equipment. The cause for the latter behaviour probably lies in the fact that the speakers in question aren’t vintage enough or vintage in the right way. I have no problems with that.

First of all, neither of the speakers was created during a period when the quality of the hi-fi equipment in general would have been particularly significant; as far as I know, the 70s didn’t produce memorable speakers in big numbers. Secondly, being a vintage item preconditions a certain previously known prestige and public acceptance by relevant people. Such is missing here. Vintage items can be items that are not vintage yet, but for which there are good reasons to believe that their appreciation will gather speed in some foreseeable future. Neither of the speakers is special enough for this.

Both speakers are indeed quite rare today, especially in such a good condition. Both were top of the line models at the time, and that explains the limited production. But rarity alone does not make anything vintage. Hundreds of rare speakers exist. If I am asked, Marantz HD88 and KLH Model Ten CT-38 give a good idea of the era they were created and the loudspeaker design of the country of their origin. That’s already something.

Eams’ design chairs are vintage items because they are Eams’ chairs regardless of the chair. The same holds true of many other true vintage design items. The two loudspeakers were designed by two audio giants: HD88 by “ex-JBL” Edmond May, and the CT-38 by Henry Kloss. Would that make any difference in terms of their vintage status?

As said, it seems to me that the 1970s wasn’t top time in the history of loudspeaker development. The door was open for mass market products, and manufacturers focused increasingly on smaller and more insensitive speakers while the amp manufacturers concentrated to boost the power of their amps and the number of transistors.

If one would have to select some speakers from the 70’s that would likely qualify as genuine vintage speakers, BBC/KEF LS3/5, Dynaco A25, Dahlquist DQ10, B&W 801, Yamaha NS100 and, perhaps, Tannoy Arden could be such. The roots of these speakers are, however, strongly instilled in the 60s, and, for example, Tannoy Monitor Golds and REDs are, so I’ve understood, still appreciated more than their 1970s successors.

On the other hand, if such speakers as Technics SB-7070, Kenwood Model Seven, Pioneer HPM-200, Braun / ADS 810 or SABA Professional 1300 can be vintage items, as has been suggested, why not the HD88 or the Model Ten CT-38? I have no other answer to the question than that it makes hardly sense to use a concept in such a way that it does not rule anything out. We can always call HD88 and Model Ten CT-38 “classic speakers” instead of “vintage speakers”, if that helps. If the classification indeed matters at all.

Marantz HD-series – HD77 and HD88 – were made from 1977 to the early 1980s. At the time, Marantz was still Marantz and not something else. Or rather, it was Marantz Superscope whose products were manufactured by the Japanese Standard Radio Corp. Later, the company changed its name to Marantz Japanese.

Marantz HD-series – HD77 and HD88 – were made from 1977 to the early 1980s. At the time, Marantz was still Marantz and not something else. Or rather, it was Marantz Superscope whose products were manufactured by the Japanese Standard Radio Corp. Later, the company changed its name to Marantz Japanese. The review speaker pair was very likely made at the Marantz’s Belgium factory that was established in 1974. The first owner bought the pair September 1979 and paid 3200 Swedish crowns for the pair. HD88’s was later replaced by HD880.

HD88 measures 106 x 38 x 30 cm. It’s a 4-way speaker with 2 x 2.5 cm textile-dome super-tweeters, 1 x 4 inch dome tweeter, a single 12cm midrange driver and one ported 30cm woofer. The crossover frequencies are 500 Hz / 3 kHz / 8 kHz. The cone of the midrange driver is some composite material, the use of which for cones was still new at the time. Who actually made the drivers is not known to me.

The bass response can be adjusted by inserting foam plugs to the port, the techniques that was kind of invented in the early 1970s. The HD88 was the last Marantz speaker to use the thick foam grill. Pity that it had perished and replaced with a textile grill. Fortunately the HD88 is quite a handsome speaker even without the grill.

According to the manufacturer the speaker can take with 300 watts of amp power, produces up to 90 decibels of sound pressure, and can reproduce frequencies from 20 to 25 000 Hz (- 3 dB) with little distortion (<0.5 percent 35 Hz-25 kHz). The nominal impedance is 8 ohms. The speakers were otherwise in original condition, but the woofer surrounds were new.

Not much is known about KLH Model Ten CT-38. It’s 104 cm high (28 cm wide and deep) and 27 kg heavy two-way speaker with two 20cm woofers and two 5cm paper cone tweeters. Woofers are in a sealed enclosure. The four part grill is kind of screen that is wrapped around the top and bottom sections of the speaker. The top plate is decorated with a removable glass plate. The speaker was manufactured between 1977-1981. As to the review pair, woofer suspension was renewed and the capacitors in the crossover upgraded.

For the package to be complete, I borrowed, from Kallion Retro a receiver from the same period: a 15W Sansui 310. The claimed frequency response is 30-35 000 Hz (± 1 dB), and the harmonic distortion 0.4%. Speaker cables were of silver/copper-type. Speaker jacks are on the ground plate. To reach them the speakers must be tilted heavily. A turntable would have been the correct audio source in this case but I contented myself with a Sony pro CD-player.

Marantz HD88 turned out to sound quite a like typical American speaker (supposing there is such a thing) with powerful & boomy bass. If someone described the sound as a traditional JBL sound, he/she would not, broadly understood, be entirely wrong. In comparison to modern tweeters and the way they are tuned up, there was some lack of brilliance over the highest octaves. But the warmth of the sound, its some sort of veiled darkness, was not due to weak tweeter performance but strong present bass.

Despite the bass the midrange was not foggy. Integration between the midrange unit, tweeter and super-tweeter was surprisingly smooth and gentle. Adjustments had little impact on the overall tonal character – I don’t know why.

The KLH Model Ten CT-38 sounded not too different. If possible, the bass department was even more superfluous and booming, at least in the room I tried the speakers. This speaker undoubtedly requires more work regarding ideal positioning. However, I have heard these speakers in a larger space and there the sound was clearly less hefty.

Compared to the Marantz HD88, the midrange, and in particular the treble, of the CT-38 was less active and slightly more blunt, but also a more natural and more musically sensitive, so to speak. Vocal music was outputted more music-friendly than with the Marantz, sonic detail being musically more relevant. I also liked the CT-38’s natural transient response and rhythmic expression in general, the feeling that music progresses from a point of time to another.

According to my far from comprehensive listening impressions, both speakers had troubles in controlling the bass response in a circa 27 sqm room, and therefore suffered from the problems of coloration and hence, overly thick tonal balance. Apart from that, there was nothing fundamentally wrong with the sound of either speaker.

I had a hunch that if, in one way or another, one would manage to regulate the amount of bass, to bring it closer to European standards, both speakers would sound quite competent, though not modern. Marantz was a step better as a hi-fi speaker, but the KLH appeared to serve the music better in some – not all – important respects, ambiguous at it may sound.

I still believe that, on average, the period of 1935-65 produced better speakers than the 1970s, quite evidently so. The fact is I think also reflected in pecuniary valuation. Not too much of money is needed to acquire a Marantz or KLH speaker from the 1970s. That almost never happens with a real vintage speaker. That does not mean that speakers such as Marantz HD88 or KLH Ten CT-38 could not be truly valuable to people who’ve lost their soul to this type of speakers. And that is how it should be.