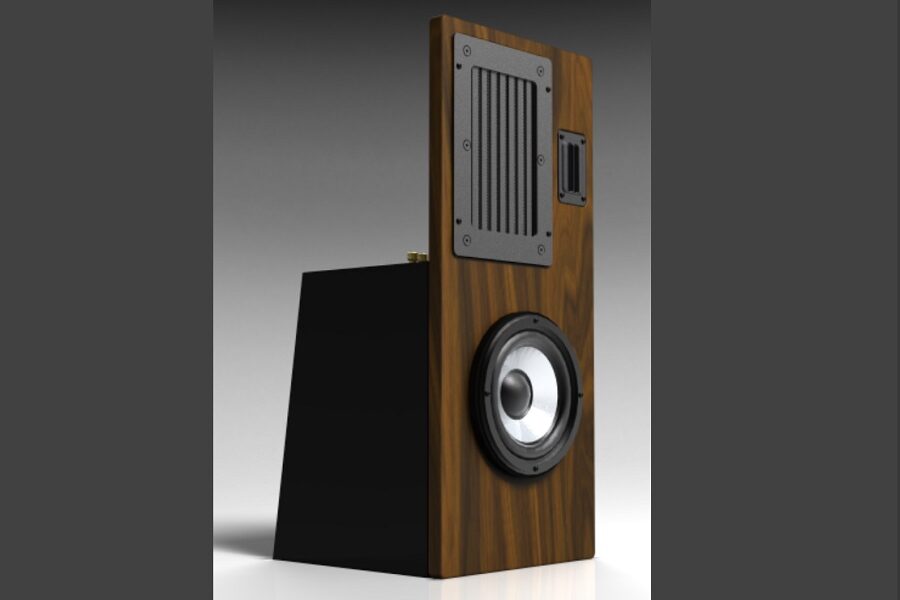 Following the re-emergence of Audiojumble ’22 in the UK in May, after the pandemic, it was my good fortune to obtain a nice pair of Eminent Technology LFT 16 loudspeakers. I was drawn to the application of Ribbon (tweeter), Planar (Midrange), and superfast 6” cone Woofer all combined in a ‘cost no object’ – object!

The promise of super detail, air, and lightning transients was irresistible. Hooked up to an Audio Research Ref 75 (KT120’s) from my Musical Fidelity FCD/F22 valve-based source things looked up literally atop Klipsch Cornwall III loudspeakers at around 54” – an optimum height as prescribed by the great audiophile/speaker designer Gilbert Briggs, which I find works excellently for my Gradient Helsinki 1.5, and my reference Yamaha NS1000M’s, and so to for the LFT 16 too.

First impressions were immediately impressive: the midrange was superb, clear and cutting deep into the mix of a Déjà vu retro CD recording of Chick Corea and Lionel Hampton together live – ‘Sea Breeze’ was sublime, complex but musically coherent. On ‘Come Rain or Come Shine’ the female vocals presented recording anomalies that although inherent on the CD pushed the ribbon tweeter to a ‘steely edge’, an extreme example of the nature and limits of such technologies as a solution for sound reproduction.

The logic and thinking behind this concept ‘hybrid’ loudspeaker is clearly explained in the excellent 26-page reference manual, and it made sense, everything worked within the parameters of its design to be the best it could be but at the same time something was missing too. I can only describe it as a feeling that despite a convincing ability to grab one’s attention there was a ‘worrying’ niggle that it did not hold together as a whole. What was its origin?

As Eminent Technologies explains, to fully understand the LFT design, one must first consider pros and cons of the design and operation of the LFT 16’s three most notable antecedents: the push-pull electrostatic loudspeaker (ESL); the traditional, single-ended planar magnetic loudspeaker, and the ribbon loudspeaker.

The electrostatic, because its diaphragm is so thin and light, offers exceptionally good transient response and reproduction of subtle, low-level musical detail. And, being a true push-pull device, the ESL operates in a linear fashion. On the negative side of the ledger, the ESL does require passing the amplified musical signal through a transformer, which can introduce its own colorations and non-linearities.

The strengths of a planar magnetic speaker are, despite of a somewhat more massive diaphragm, similar to those of the ESL. But the planar magnetic requires no step-up transformer or bias voltage supply, and it has the added benefit of being an extremely manageable load for most amplifiers. The most specific drawback of the traditional planar magnetic is that it is a single-ended (as opposed to push-pull) device: As the diaphragm’s physical excursion increases, the voice grid moves further away from its optimal location within the permanent magnetic field (at least in one direction). Thus, at the very instant when this speaker is called upon to reproduce large-amplitude waveforms, it is least able to do so without distortion.

A ribbon driver can be an excellent performer in that the moving element (the “ribbon” itself) is extremely light, allowing good “speed” and transient performance as well as freedom from coloration. The ribbon’s main problem is not one of performance but of application: it cannot be used to reproduce low frequencies. To create a moving element large enough to generate frequencies lower than a few hundred Hz would mean moving opposing magnetic poles so far apart that they would no longer exert a sufficient magnetic field over the entire area of the ribbon. Also, when a ribbon is operated at frequencies approaching the element’s own resonant frequency, the ribbon element stretches and “bows” to a point where it is no longer within the magnetic gap.

Eminent Technology argues that its Linear Field Transducer, introduced as the LFT, represents “a new approach to the design of a high-quality loudspeaker that builds on the strengths of the above designs while eliminating many of their drawbacks.”

The Eminent Technology LFT is a full-range, push-pull, dynamic planar loudspeaker, the essence of which is “a magnetic drive principle that ensures that the magnetic field intensity stays constant as the diaphragm of the speaker panel moves between the magnets following the audio signal. Thus the panel works like a magnetic equivalent of a push-pull electrostatic loudspeaker without a step up transformer or bias voltage. Applying the audio signal directly to the diaphragm keeps the distortion low even at high sound pressure levels.”

The mid-range panel of the LFT-16 speaker uses a low mass foil diaphragm with conductor traces etched with high resolution to obtain a uniform driving force over the entire surface area of the diaphragm. The high frequency tweeter uses a thin, lightweight diaphragm to reproduce frequencies above 7500 Hz/12dB. The 22.7 grams heavy paper coned woofer (combined with a complaint surround and spider) gives a low Q in a small sealed “acoustic suspension” enclosure (9 L), providing for “good transient response and minimal coloration” near the crossover region 180 Hz/6dB.

As to the crossover, the upper one at 7.5 kHz is easier to realize, and hardly the cause for the observed incoherence problems in the response. The lower crossing poses much harder design questions despite the fact that the midrange panel’s response extends an octave below the crossover point. Perhaps some kind of indicator of the difficulties in getting a coherent sound is provided by the fact that in the later LFT-16a version, the manufacturer has decided to lift the crossover frequency to 250 hertz, and replaced the coated felted paper cone of the woofer cone into aluminum. Eminent’ has certainly taken many precautions in order to obtain a happy blend between the woofer and the mid-range driver, but I still had a feeling that the blend wasn’t a perfect one, and that the sound didn’t hold together as a whole.

Not unrelatedly. Although undeniably an outstanding product, for me the LFT 16 lacked that ‘Mojo’ – that undefinable ‘something’ which makes great music reproduction greater than the sum of its parts. As the saying goes: It don’t mean a thing, if it ain’t got that swing! Even if everything is operating correctly within a range, it must hold together in order to sing. Experiments continued but to no avail, and the LFT 16 was traded in for a really late pair of QUAD ELS 57’s – ironically representing the very ‘Electroacoustic’ technology claimed by Eminent Technologies in their manual to have been bettered by Planar Panels in the LFT 16.

Atop 12” stands with a mass greater than a ‘Black Hole’, the 60+ year old technology ‘swung’ with total insight and absorption of these very same tracks despite all the flaws in the recording – musical genius filled the room. I have had many QUAD permutations in my time – we share our age – from stacked doubles (Project 201), to positioning aka Faye Dunaway’s set up (A surprising advocate of the QUAD sound) – that to return yet again to these speakers driven by an outstanding example of the classic QUAD 33/303 set up was like an emotional reunion with a long-lost friend – not ‘nostalgic but real and visceral; which to me means everything!!

Vaughan Warren has written on Vintage Hi Fi for INNER WORLD AUDIO since the magazine’s inception sharing his passion for the High Fidelity world of yesteryear that is still musically relevant today.