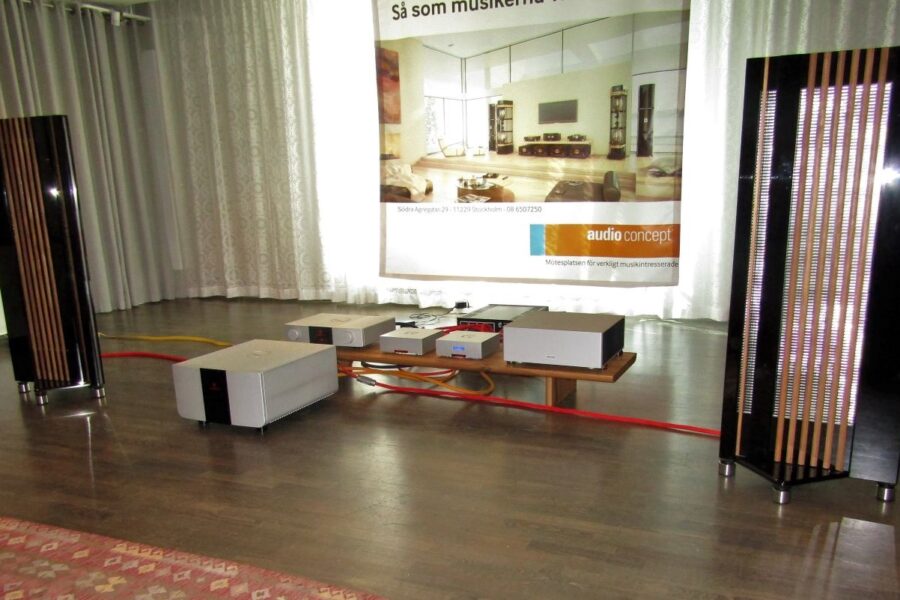 In Feb 2020, Highend Stockholm escaped, just by a few days, the covid-19 restrictions. Hence, the only Show they missed was the 2021 one. This year the Show went on, albeit postponed by two months.

The intermediate year had definitively generated bottled-up demand, which appeared to manifest itself more in the number of visitors, especially on Saturday, rather than in the number of exhibitors. Importers would no doubt have had something to showcase given the many novelties the manufacturers have been introducing through 2020-22, but perhaps it was the exceptionality of the times that diluted enthusiasm and made exhibitors more careful. The atmosphere was not in the same way ‘stagnant’ as it was two years back, 2-3 weeks before the outburst of the pandemic, but there was something special about the “stimmung” this time, some sort of uncertainty of the direction, perhaps.

Of the regular participants OPUS3 was missing and along with it the familiar hustle around Jan-Eric Persson. It made the Sheraton upstairs deserted. Fortunately, the sound technology club Ljudtekniska Sällskapet kept its traditions and offered visitors its own Musik & Ljudteknik magazine, as did the Sweden’s number one Hifi magazine, Hifi & Musik.

Of all who had preregistered, at least the Old School HiFi did not appear, and with it off went VREL and Blumenhofer loudspeakers, and the Kr Audio amps. But let the images speak for themselves (sorry for the wanting quality). I have left out some rooms and set-ups on the grounds that they’ve been around at other fairs, for example the one at the Hifiklubben room, consisting of Hegel amps and B&W loudspeakers including the magnificent B&W 801 D4. On the other hand, the Technics room proved how even a bigger actor has to fight for attention in the spotlight if the product selection remains the same for a couple of years.

The same was true of the room by HiFi-Agenten that has many great brands on its import list, but for some reason again had chosen for the demo the Canadian Paradigm loudspeakers, Bladelius (with Powergrip power filters) amplifiers, together with Technics CD player and Thorens turntable. Nothing wrong with the sound itself, and but why miss the chance to showcase something new or at least different?

The not so serious BIS (Best in Show) award was a tough competition between the different loudspeaker operating principles. There was Avantgarde’s new active Trio G3 horn speaker; German Physik’s omnidirectional Borderline MK IV speakers amplified by Spectral; Alsyvox Tintoretto panel speakers with Karan Master Collection amplifiers together with Omega Audio Concepts and Taiko. As for dynamic speakers, in addition to Technics (Technics electronics), and Focal’s Sopra (Pass Labs amps), there were YG Acoustics (Aesthetix Atlas amps) and of course the great Rockport & Pilium combination in the room pulled together by Perfect Sense.

All in all, somehow a modest Show this time but still fun. As one exhibitor put it: a happy music playback system can make a home a more pleasant place to be. Few things affect our mood as much as good music does, and he even went further: reproducing the musical experience on carefully selected stereos is why we exist!

Transient Design, together with the Finnish Tur-Pex, had built an awesome system centered on Avantgarden’s new Trio G3 speaker supported by an active Spacehorn bass. The Trio has undergone major changes, starting with the materials, placement of the units, etc. The biggest change is visible on the side of the chassis, now revealing the new iTRON power control unit. Thanks to it, the speaker can be set to operate fully or only half active.

When run only partly active, there is the new XA POWER amplifier and XA PRE preamplifier.

This is the room where one would traditionally hear the voice of Olle Mårtensson (Hifi Consult), one of the fervent characters of the Swedish Hi-fi scene. However, this time it was German Physiks and its Borderland Mk IV omnidirectional speakers with the characteristic 200 Hz to 24 kHz DDD element on top, amplification provided by Spectral and Mbl N31, cables from Wireworld.

PL Audio demoed two Focal floor speakers, Sopra no2 and Kanta no2, the latter in the command of the Swedish Moonriver amplifier, and the former, Pass Labs. Other equipment came from dCS and Clearaudio, cables from Tellurium Q and Siltech, and power filters from Isotek. Decent highend sound.

Audio Concept was in its parade site, and again had chosen right speakers for the largish room: Alsyvox’s smallest (144 cm, 85 kg) flat-panel speaker Tintoretto with 3052 cm2 bass panel, 25 mm wide midrange (> 750 Hz) and a 5 mm wide super tweeter (> 5000 Hz). Between the speakers there was a collection of Karan Master Collection amplifiers, along with electronics by Omega Audio Concepts and Taiko. Truly impressive performance!

One of my enduring favorites, Perfect Sound, has always managed to put together a high-quality, easy-going, natural-sounding system, this time with the help of Rockport’s Avior II loudspeakers, Pilium’s Leonidas amplifier, and Aurender’s new N30SA network player with the APL dac and Esprit cables. Voila!

Turtables were still used as the main source in many rooms, like this Brinkmann in the Stylus Audio room.

The toughest competitor for the big boys came from Sweden: Lindström Audio and its less than a meter long ISO 85 loudspeaker, with two magnetostatic elements for the treble, one 6.5 incher for the midrange and four 8-inch woofwers in an open back baffle. There simply is something magical about dipole bass! This was one of the best performances of the fair, and the amps were …

Would you believe that these fist-sized tube amps emit 170 watts of power each? Yes, they do, and that’s because inside the tube there are gallium nitride power units. These are AGD’s GaNTube mono terminals called The Audio, and as said, they worked fantastically with the Lindström speakers.

After a short break, Bang & Olufsen was back at the Show and demoed the new Beolab 28 pillar speaker together with the BeoLab 50. Sounded good but did it happen at the expense of the soulfulness of the sound?

Audio Note UK had once again assembled a quality system from in-house components: TT-Two turntable with ARM-Two / II tonearm and IQ3-mc cartridge, CDT_Two / II-cd transport and DAC2.1x / II-dac, M6 with a phono amp, and Jinro Shochu 211 SET as the power amp, and finally the AN-E / SPe HE loudspeakers. Together with the cables, the sum total was creeping beyond the 100,000 limit. Punk and heavy metal or similar hard stuff it was but it worked!

One Meta’s best competitor was in the adjacent room: the € 30 000 French Cabasse Pearl Pelegrina, an active speaker with a concentric TCA triaxial element in combination with a 30 cm HELD woofer.

This time the small 2-way stand-mounted speakers were in a clear minority. The toughest competition was between the Hecon Belladonna (with a Cayin Soul 170I amplifier) ​and …

​… the Neat Ultimatum XLS (with Chordin’s ULTIMA series amplification). Neither of them sounded bad, on the contrary, but all other things being equal, I’d say Heco got the longest stick.

The multi-colored i / 50 represents new thinking in Audio Research’s amplifier design/production. The rear panel sports ports for a phono and dac modules. Two 6550WE power tubes per channel deliver continuous power of 50 watts (thd 1% 1kHz), three 6922s at the front.

HiFi Rose is known for its streaming devices, but such thing is joined by the RA180 stereo amplifier. Built around GaN fets, the Class A/D-amplifier gives 400 W per channel on request.

This time the RA180 was connected to Mbl’s 126 omnidirectional loudspeakers with nice results.

Perhaps the most sympathetic system at the fair was the one in which the Italian Omega Audio Concepts’ Dual Mono Amplifiers (on top of Nano Power Supply) drove Estelon’s most affordable floorstander Classic YB MK II. Technics 1200G turntable had DS Audio’s optical 003 cartridge.

In spring 2020, Trinaudio’s journey to Sweden was interrupted, but now the exciting Italian brand brought on not only their Gyros 33 turntable but also the Fysis 50 Ti 50 watter.

The speakers were Canadian GoldenEar Tritons made to cross in front of the listener. The sound was definitively worth paying attention to.

The Feliks Audio Envy is an 8 W Class A 300B headphone amplifier with a transformer-coupled output, here photographed with Meze Audio’s open isodynamic hybrid headphones, the Elitet.

The room for Stax lovers.

Spendor’s 3-way Classic 1/2 performed with Moon amplification and Nordost cables. The family tree of the speaker extends down to Spendor’s first product, the legendary BC-1 from 1969.

Sonus Faber’s Maxima Amator sounded warmer than I remembered. There was a clear resonance in the room, but I would argue that Audio Research i / 50 amp also played a part.

Svalander Audio has long assisted Swedish hi-fi freaks by sharing information and selling components and accessories that are not available elsewhere. Svalander’s Furutech Wall is a favorite meeting point for fair visitors.