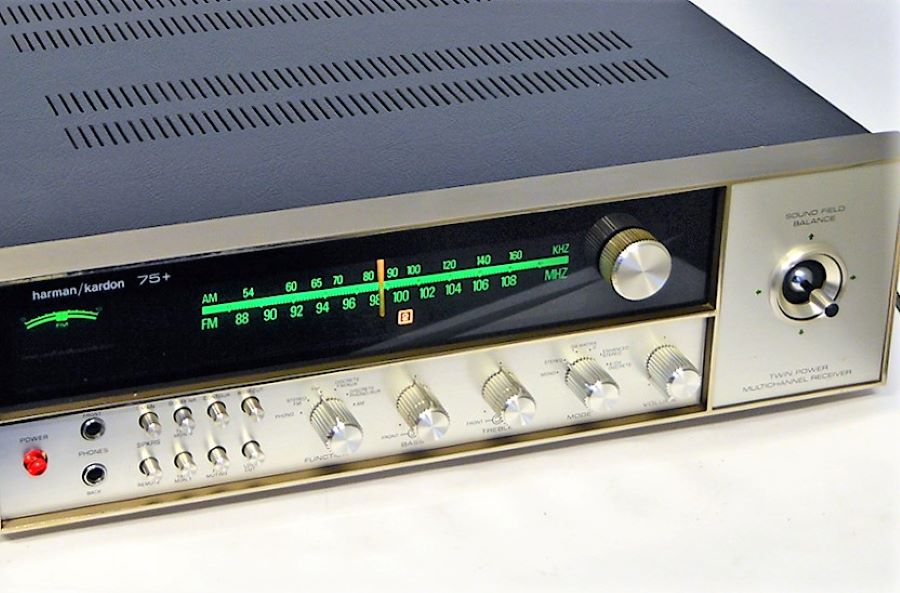 A receiver is not a new invention. The first were born in the 1930s. The perception of receiver/tuners today is more influenced by Sidney Harman’s and Bernard Kardon’s Harman / Kardon than perhaps any other manufacturer. Harman / Kardon is known for its many technological innovations, and it wasn’t even frightened when quadrophonic sound first raised its head in the 1970s.

When you stop to have a good look at the Harman Kardon 75+, the old truth comes to mind: in order to understand a country or a nation, one should not stare at what it says or thinks, but what it produces. In good and bad. The H/K 75+ is an transistor amplifier from the early 1970s. At the time, European roads saw such speeders as the Alfa Romeo Giulia, Fiat 132, Ford Taunus, Opel Record and BMW 2002. None of them very big, but in the subtle European way, very stylish.

Style cannot be purchased. It has never bothered Americans as long as everything’s big, streamlined and handsome. And practical. Long-bowed and multi-liter “American irons” like the 1970s Buick Riviera, Ford Thunderbird, Dodge Challenger or Cadillac Eldorado would not have been possible in the 1970s Europe. The 1970 Ford Mustang is 60cm longer than the Porsche 911 from the same year!

Car comparisons are generally unintelligent, I know. This time, however, the temptation is too great: the family oriented mid-series model H/K 75+ is a big and heavy amplifier. Not a monster, but far from being Fiat 500. There are other obvious commonalities.

At the time of the H/K 75+, American cars had features that were rare in European cars. This was evident in the control panels, which to European eyes looked “dashboards” in the true sense of the word. The control panel of the H/K 75+ certainly looks American. Behind the dark glass that dominates the front panel shines a McIntosh-style, green-lit, and widely smiling meter panel with a “chrome” tuning knob. The red backlit power button gives nice brake light type of contrast.

The source selector reveals that the amplifier is from the era when the sound source was either a turntable, a tuner, or a tape recorder. The aux inputs are named Discrete FM/aux and Discrete Phono/aux, and there is a reason for that: the ability to listen to discrete multi-channel sound.

To listen to a Dolby encoded FM broadcast, what one needs is to connect an external Dolby FM noise reduction decoder to the system and press the EX DOLBY NR switch. The Contour switch raises the level of the bass at low listening volumes, ie. it’s kind of loudness switch. High/Low out filters (50Hz & 10kHz) cut out annoying hiss and rumble when playing LPs.

The bass/treble controls (± 12dB) are two-part, front for rear speakers, rear for front channels. There are headphone outputs for either stereo or 4CH headphones. There is also a stepwise mute switch for cutting noise between FM channels. In addition, there is a speaker configuration switch and Mode selector as well as the best of all: Joystick! More of that below.

The rear panel resembles the rear panel of a modern AV amplifier with typical rows of inputs/outputs: four inputs each. There are also outputs enough for recording simultaneously with two stereo recorders, one four-tracker or even two four-track machines.

The Harman Kardon 75+ wouldn’t be a 1970s American machine if it wasn’t for the V8 purring under the hood instead of the usual straight four cylinder of many European cars. The power stage of the amp comes from the H/K Twin Powered series, a technology used by H/K in its top-end amplifiers.

Twin Power meant two AC transformers, one for both channels. Both channels also sport their own rectifier and filter capacitor set. This resulted in better current delivery capacity and higher peak power. Channel separation got also improved. In marketing language: “pure power over a wide band”.

According to the H/K brochures, the 75+ produces “conservatively estimated” 45 watts RMS 8 ohms stereo power with less than 0.5% harmonic distortion. In practice, says H/K, the total harmonic distortion is typically 0.2% at full power in the 20-20kHz band. As for intermodulation distortion, which back then was taken seriously by many amplifier manufacturers, H/K reports <0.15% and a S/N ratio of 85dB (line).

H/K was particularly proud of the fact that the 75+’s square wave deviated less than 3% at 20 Hz, and the rise time at 20 kilohertz was better than 2 microseconds. The secret of these figures was the coupling used by Harman / Kardon in its Citation amplifiers, which included, among other things, a fairly extensive use of global feedback. The claim was also that the amplifier was completely stable regardless of the load, and all speakers with a nominal impedance between 4-16 ohms will run without problems. The damping factor is 40. The frequency response is said to be: 10 – 40kHz ± 0.3dB; 4Hz – 70kHz, ± 0.5dB; and 1 Hz to 100 kHz ± 1.0 dB.

And now to the essence of this amp. The official model name of the amplifier is Harman Kardon 75+ Quad Receiver, the main emphasis being on the word Quad, meaning four, just as stereo means two.

By the time the 75+ was born, multichannel was on the rise. Quadrophonics was one of the first commercial attempts to provide multi-channel surround sound on the consumer market. In practice, this meant that four speakers were connected to the amplifier, then placed in the “corners” of the room, where they reproduced four more or less discrete channels. Some kind of 4.0 surround sound, if you like.

There were different quad formats. There were matrix-based encoding/decoding systems such as the OS Regular Matrix format developed by Sansui, which was launched in the US in March 1971. In the same year, Columbia Records, along with Sony, launched the SQ Quadraphonic system, which was also used by EMI in the UK. In addition to these, there were discrete (channel independent) 4-channel formats much more complex than the matrix-based systems. The most famous discrete system was the 1972 CD-4 or Quadradisc format developed by the Japanese JVC together with RCA.

On such 4ch records, the sum signal of the front and rear channels was cut on both walls of the groove. The very high frequency (30000-50000Hz) carrier signal included a front and rear channel separation signal. In stereo, the record sounded like a regular stereo, but demodulated into a true four-channel. To play such records, the turntable had to have a CD-4 cartridge with a Shibata-type stylus capable of reproducing frequencies up to 45,000 Hz. A separate CD-4 decoder was also needed.

Thousands of quadrophonic records were pressed in the 1970s. However, the launching a new format failed due in part to technical problems, in part due to incompatibility of formats. Making four-channel recordings was expensive and required additional speakers and equipment to play.

Operating the mode selector and the joystick

At the time of the H/K 75+, however, markets’ faith in the four-channel playback was still strong. Therefore, in addition to mono and stereo, this amp was designed to play SQ matrix-based audio and the discrete CD-4 format. For the purpose, the rear panel of the amplifier has speaker connections for the front and rear speakers and a similar set for example for another room. The rear speakers are included in 4CH playback by using the stereo/quad slider switch on the rear panel. On where and how the speakers ought to be placed the manual provides a variety of options. Illuminated number combinations on the front display indicate which mode (Mono, Stereo, SQ Matrix, SQ Matrix Blend, Stereo-to-Quad, Discrete Quad) is currently in use.

The “SQ matrix” accurately preserves the spatial perspective of the concert hall, the second option brings a bit of mixing to the front channels, but separates the front and rear channels more strongly. The first option was meant to be suitable for orchestral music, the second for rock and other music, in which the solo instrument is in the foreground.

On the right hand side of the front panel is an amplifier’s bravure: a joystick that lets the listener adjust the sound stage in both depth- and width-wise, just like in some modern cars. The stick rotates 360 ° and allows the listener to freely and easily control the surround effect of stereo or 4-channel sound and set the focus of the sound in the listening area, according to what feels best.

In Quad mode, the amplifier simultaneously produces powers of 18W RMS per channel at 8 ohms with less than 0.5% THD.

To begin with, the sensitivity and low noise of the tuner was kind of surprise. Despite the modest antenna arrangement, the radio stations were tuned and locked relatively precisely and there was basically no sliding. The handheld meter shows signal strength. The tuner is automatically detected by the stereo signal.

And it’s a good-sounding tuner too! Human voice sounded like a real voice (a tuner can change voice), and there was sufficiently bass for the sort of music that required bass (some tuners are better in this than others). The difference between compressed and less compressed radio broadcasts is immediately apparent. The sound mixed in the middle was reproduced exactly from the center of the speakers, and the stereo image was as believable and three-dimensional as when listening to records.

Listening to CDs did not change the bigger picture. Tonally, it was pleasantly bright and light, although the efficiency and power of bass reproduction was even more evident, as was the impact of the sound. Admittedly, on some of the songs, the bass came out unnecessarily heavy, but that was probably due to the speaker interface. Imaging was by and large correct, but something seemed to “reduce” the size of the sound (especially as compared to a tube amplifier). There was no risk that this amp would throw the sound onto the listener’s face.

Perhaps the major complaint about the otherwise valid and modern sound was its tonal one-dimensionality and harshness, especially in the treble area. Depending on the music, the sound could have benefitted from more warmth. I wonder what would have happened if the preamp and/or the power stage had featured tubes instead of transistors, as well as more modest feedback loops? H/K itself manufactured such tuners in the 1950s and 60s.

Unfortunately I didn’t have four-channel records. But a some sort of picture of the four-speaker playback was obtained by comparing the stereo sound to the amplifier’s own “enhanced stereo” mode. In this mode, the amplifier synthesizes all two-channel program material (FM, recorder, turntable) into a pseudo-four-channel with Harman/Kardon’s own phase shift circuitry.

ES is no joke. Especially with music that relies on spatial impression (classical orchestral music), ES broadens the sound and adds a component that clearly mimics the dimensions of a concert hall. The sound truly surrounds the listener to the extent that the idea of multichannel audio could not have gone unnoticed by the amp’s contemporaries, even if four-channel records or tapes were not available.

And the Joystick is a real joy to use! It allows one to play with the areal focus of the sound in the way that was very educational experience indeed.

Harman / Kardon 75+ was on loan from Hifidealer (www.hifidealer.net). There it cost 444 euros.