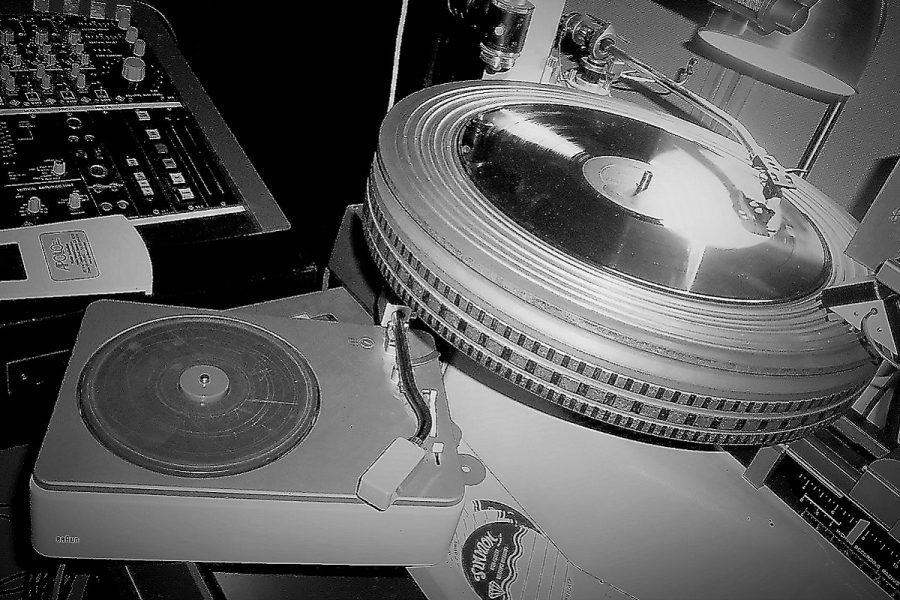 Everybody knows the story “David versus Goliath”, which is in popular circles is taken to mean a contest where a smaller, weaker opponent faces a much bigger, stronger adversary. I thought the parable might be appropriate when I got a chance to arrange such a “battle” between the little Braun PCS45 turntable and the mighty Neumann cutting lathe VMS-70.

Am I the only person on earth who’s directly compared the two German master pieces at two extremes? Let’s look at the turntables first.

The current world of electrical objects would not be what it is without Dieter Rams (s. 1932). Coming from the outskirts of the Bauhaus design house, strongly functionalist Rams is a major industrial designer of the 20th century, known especially for his discreet and simplicity-striving approach and for his recognizable timeless style that has greatly influenced Western industrial design for more than half a century.

Rams’ “Weniger, aber besser” (“lesser is more”) precept is omni-present in numerous modern products (not least in the Apple’s devices).

The German consumer product giant Braun hired Rams, who at the time studied architecture and interior design at the Wiesbaden Art School, from where he graduated in 1955. In 1961, he became Braun’s chief designer, from which position he retired in 1995.

In the 1960s, Rams with his team designed well-known furniture for Vitsoe (eg. the 606 shelf and 620 chair), but world-famous he became for the consumer products he designed for Braun: Braun SM31 Sixtant racer, HLD4 hair dryer, KF20 Aromaster coffee-maker, ABK 31 wall-clock, D45/D46 slide projector, FS 80 TV, and so on. 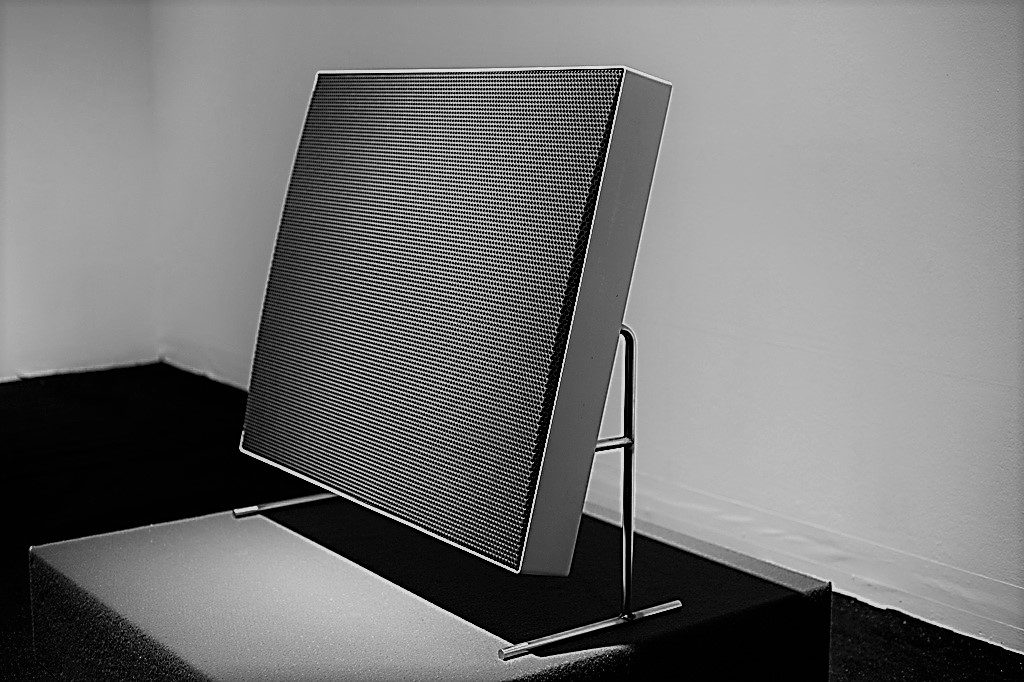 Common to all Rams/Braun devices are comparatively rugged and geometric aesthetics deviant from the mainstream, as well as their enhanced user friendliness. It has been said that Rams fundamentally changed the way we perceive the size, color and the operating system of an audio equipment.

As an example, before Rams it was far from obvious that all the components of a sound system would be of the same size to allow stacking or otherwise more versatile and creative placement. In addition, the chassis in Rams’ devices was always made of white or gray metal, the knobs were light or dark gray except the on/off knob, which was always green. Later Rams applied black on the sides of the hifi products. 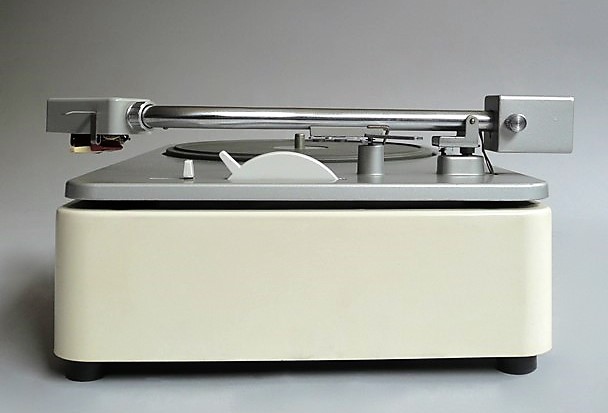 One of Rams’ toys is a silver-gray/white Braun PCS45 turntable manufactured between  1963-1965. The PCS45 is based on Wagenfeld’s PC3 and PC4 turntables for which Rams designed the plinth. New elements in the PCS45 was the platter and the tonearm, otherwise it was the same player.

The platter and the S-arm with a squared counterweight sit on a some kind of semi-suspended sub-base.

The base itself is made of modern plastic, not bakelite. The whole player weighs just 3kg. Originally it was designed modular: the same record player was added eg. to the Braun Audio M 1 stereo kit (with separate loudspeakers).

The PCS45 differs considerably eg. from the British designs such as Garrards whose turntables were technically more advanced instruments. The difference can be understood by comparing the Quad’s original ESL 57 -electrostatic loudspeaker to Rams’ version of it: the Braun LE1 (only 500 pieces were made). The LE1 looks fantastically modern whereas the original looks anachronistic. The LE1 or Rams’ gorgeously futuristic L2 loudspeaker can be paralleled with any contemporary speaker design.

The speed is controlled with a round knob which, with the help of special rolls, transmits speed to the motor shaft. The tonearm is first moved on top of the LP, No 1 of the starter knob starts the motor and drops the tonearm/stylus hydraulically on the record surface. At the end of the record, the motor automatically stops, and the tonearm needs to be lifted manually to its support.

The cartridge was originally ELAC KST 106 MM with a sapphire stylus. The individual in my test had Shure M71-6 MM with a diamond tip and spherical profile. What used to be the practice at the time, the turntable is connected to the amplifier with a 3-pin DIN cable. In 1961, the PCS45 cost 159 DM. 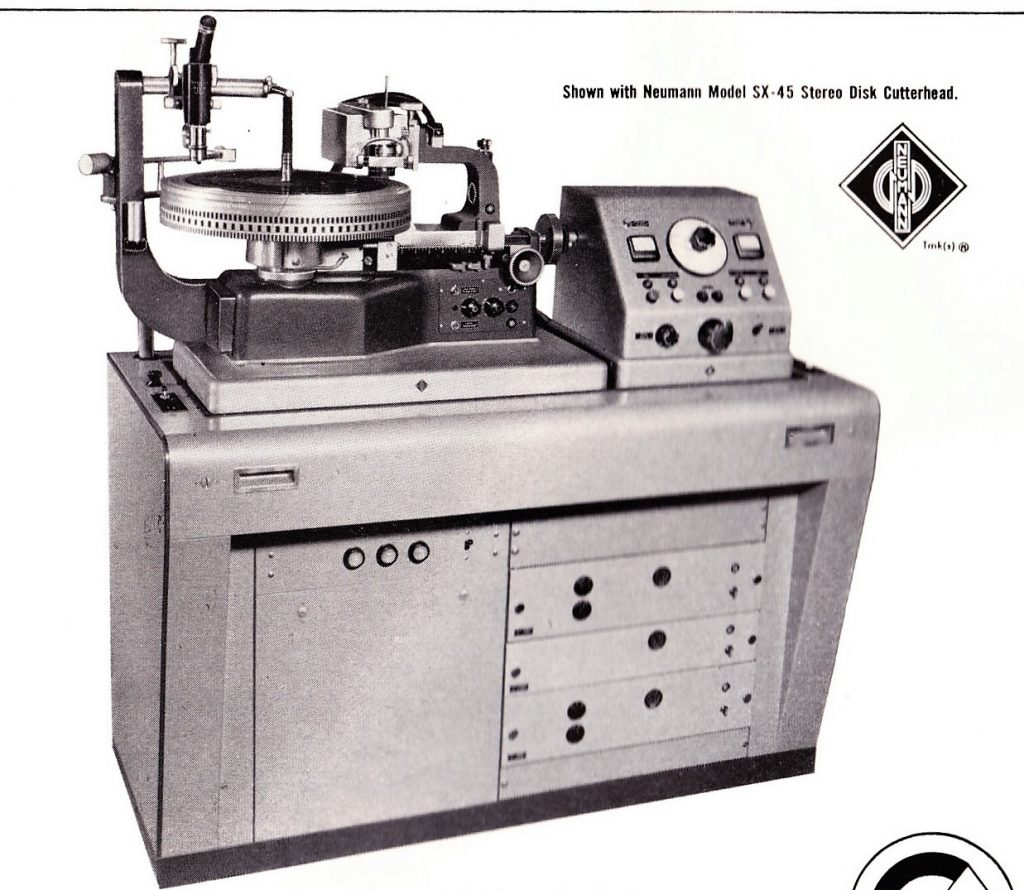 The giant of the music industry

If today’s audio devices heavily owe design-wise to Rams’ devices, the world of music and, above all, the world of vinyl recordings, is in deep debt to Georg Neumann (1898-1976), and for two reasons so.

Firstly, if all those recordings that were recorded with Georg Neumann GmbH’s microphones (eg. Neumann U47 condenser mic from 1948, M49 with the famous M7 capsule from 1951, the tubed Neumann M149, perhaps the most famous Neumann U87 from 1960) were disregarded from the total, that would make such a gap in the Western recorded music that we would hardly recognize it today.

Secondly, if of all those LPs etc. were removed from the total, which (the master) were cut by using Neumann’s cutting lathes, barely anything were left.

Georg Neumann GmbH introduced its first microphones already in the 1920s. It was not much later it became interested in the manufacturing of records. The first order for a cutting lathe came from England in the late 1920s. That meant the beginning for the development and manufacturing of cutting lathes that went on for decades.

The first lathes were belt driven, but already in the 1930s Neumann moved to using direct-drive machines: the massive motor is on the floor beneath the platter and rotates the platter via a long cardan.

In 1955, Neumann developed a method for varying the groove density (pitch) according to the stored amplitude. For this purpose, an extra head had to be mounted on the recorder, which fed the amplitude value to the cutting lathe as a control signal half a circle before the actual cut audio signal. As a result, the duration of the LPs (one side)  was extended approximately to 30 minutes. The first stereo cutting lathe ZS 90/45 Neumann launched in 1956.

In 1968, Neumann developed a technique (Tracing Simulator) to minimize distortion due to the geometric differences between the cutting cartridge/stylus, and the stylus to be used for reproducing the record. Neumann also developed the infamous DMM (Direct Metal Mastering) technology, where copper foil was used as the master disc.

Over the years, Neumann designed several “mass-produced” cutting lathes starting from the AM131 model from 1932 and ending via several models (c. 1 per decade) to the VMS-82 model in 1982. All Neumann cutting lathes resemble each other, but on their mutual superiority experts debate. The same applies to the most important part of the lathe: the cutting head: SX 45, SX 68, SX 74 and SX 84.

In the first half of the 20th century, there were several manufacturers of cutting lathes – Ortofon, Westrex, Scully, Fairchild, Dauphine, and others – but by the end of the 1950s, Neumann was practically the only one, besides of Scully, who was able to deliver a complete tape-to-disk transfer device. Neumann almost had a monopoly. 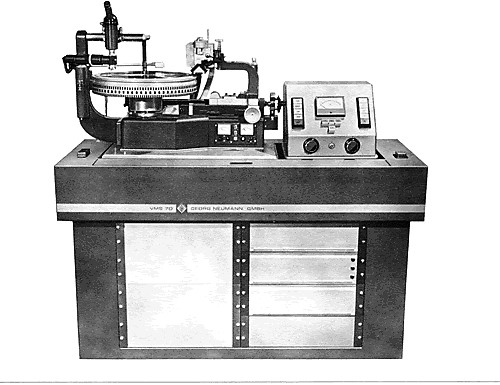 So here we are, the minuscule Braun PCS45 against the massive Neumann system, in the core of which there’s the impressive Neumann VMS-70 cutting lathe, which many consider as the best Neumann lathe ever. The system weighs some 300 kg, ie. hundred times the weight of the Braun PCS45. The 16 inch platter alone weighs 60kg!

The digital control unit is a CBS from the 1970s. The signal is amplified by Neumann SAL-74 -pre- and power amps. The system is completed with the fantastic Neumann SP-79 -master console with a Neumannin EQ, compressor and amp, Ortofon STL 732 limitter and tube-based Pulteq EQ 1 EQs.

The cutter head is Neumann SX-74 with the Helium cooled (to avoid over-heating) Transco Recording cutting cartridge/stylus. When the record has been cut, the master is tested by playing it back on the same Neumann machine with which it was cut. In this particular case the tonearm was the SME 3012 and the cartridge Stanton 680 (another option would have been Shure V-159). Nothing really special but relative to the tonearm/cartridge combo of the small Braun, decent enough.

If there’s a drawback of using Neumann VSM-70 as a turntable, it would surely be that the tonearm base is part of the same frame as the machine itself. Despite the immense weight of the system, if the body is strongly hit, the movement can be felt in the tonearm. However, I did not let the fact distract my little experiment. 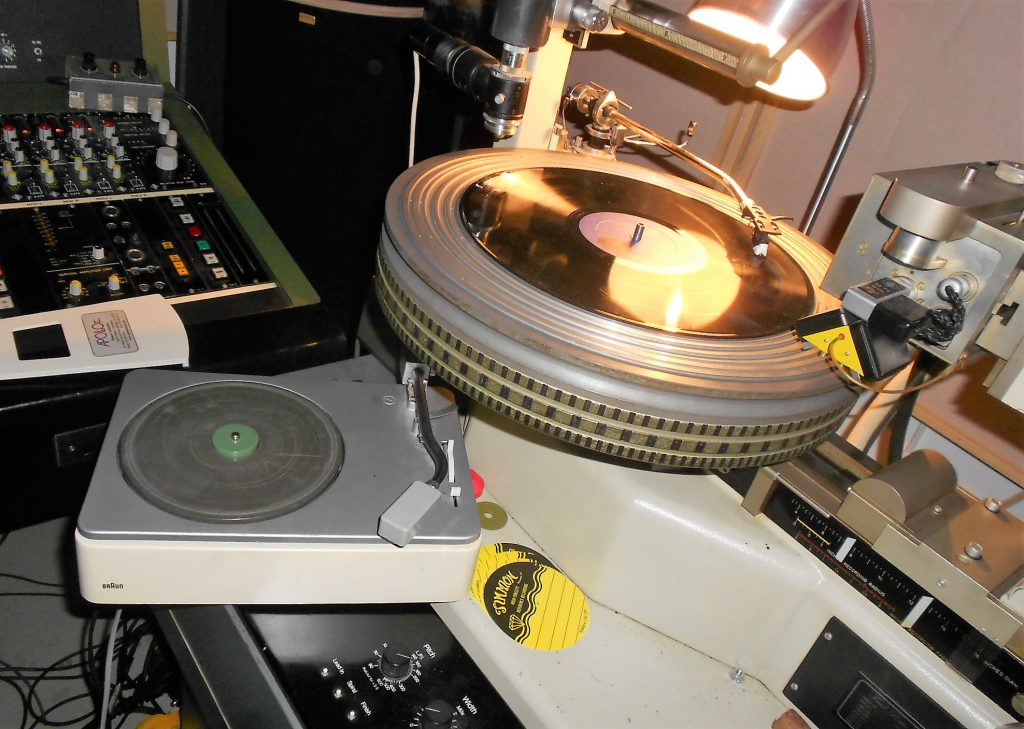 The challenger against the master

I begun the battle by listening (the Braun not placed as in the pic) to Timmion Record’s popular album, rough and slightly bass-shy sounding Little Ann’s “Deep Shadows”, American pop-soul from the 1970’s (Cat No: TRLP-004). From there I moved to my own LPs (stereo only) such as Kenny Burrel (Blue Note), Bach / Glenn Gould (CBS), Andreas Wollenweider (CBS), Marin Marais / Jordi Savall et al. (Astree), Mozart / Abbado (DG), Nina Simone (Sonet) and some other.

The somewhat puny Braun PCS45 is not as lousy turntable as one could imagine from its cute outer appearance. It does relatively accurate work in terms of time and pitch (no clearly audible slow speed variations) even though the performance is not, naturally, from the absolute top. Also, there was no significant drop in the sound quality when it came to producing the sound stage/spatial image of the recordings. However, it was obvious that the Braun does not reveal every secret of the recording venue/studio, and doesn’t illuminate all the musical nuances hidden in the groove with the accuracy of the magnifying glass. The tonal balance is a bit thin, mainly because all the bass information is not fully reproduced.

Despite its sonic shortcomings, none of which were unacceptably severe for a normal listener, the Braun PCS45 is suitable for the living room, not only for its compact style, but also for its playback capability. I’ve heard the same player as the source in a vintage HiFi system, where it sounded very satisfactorily. The little Braun has once bestowed its owner many tuneful moments with the right kind (complementing) of amplifier and speakers.

However, in confronting the Goliath of this story, David had no chance. Despite the used monitors (mid-sized Genelecs and Yamahas), certainly not ideal for HiFi type of listening, the Neumann/SME/Stanton clearly was in its own spheres.

Perhaps the best feature of the Neumann sound was that, despite its dogmatism and immovability, its absolutism, the sound was harmonious and natural, not sparkling or shining in one or the other direction. Timbres (tone color) were reproduced according to the golden mean rather than squeezing the last drop out. If I’ve heard better resolution, it wasn’t because of the player but rather because of the cartridge/tonearm.

It was the absolute propagation of the sound – the unstoppable movement forward –  that was hilariously appealing. The relaxed, cheerful and self-confident precision with which the Neumann reproduced quicker and slower transients was absolutely fantastic to follow. The Biblical phrase “as it was meant” got its musical equivalent here.

The possibility of using Nueumann cutting lathes as a turntable has not gone unnoticed by HiFi enthusiasts. In spite of fabulous asking prices, several lathes have been bought and converted just for vinyl reproduction. For purists such a maneuver is nothing but a sacrilege. Then there are those, not least in Japan, whose curiosity beats their conscience.

I must say that I slightly envy the latter.