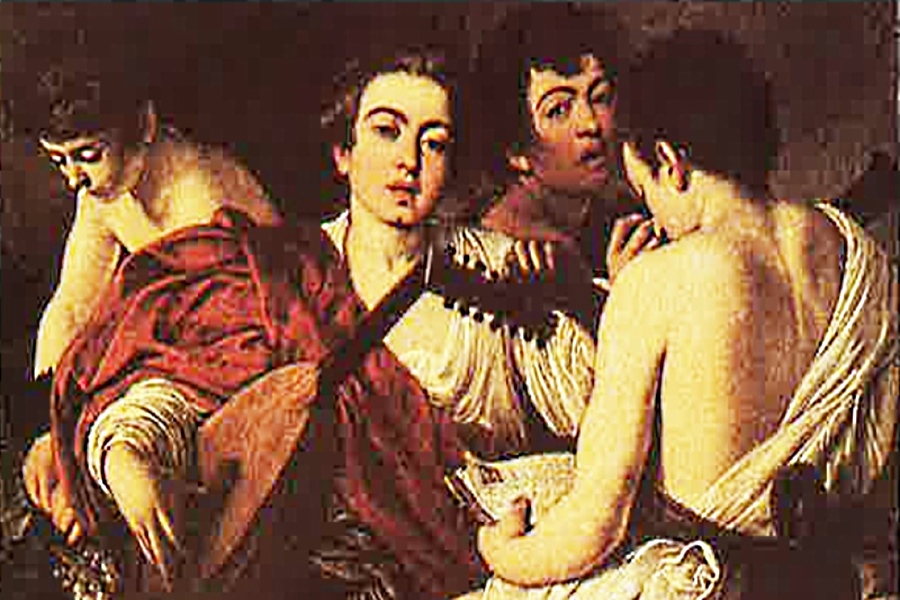 In Europe the lute was a popular instrument for at least five or six centuries, the earliest printed instrumental music is in fact a collection of lute pieces. It was as common as the guitar is today. The repertoire is enormous, a wealth of styles, tunings and sizes of instruments. Look at this pile of music, somewhere in there is a broken soul with a lute. Many, in fact.

There are several brilliant recordings out there, hard to choose, so I suggest the most subjective compilation. These records mean something to me, this is music that have accompnied me at my quiet journey through the history of music. We hear performers at maybe their most inspired moments quite early in their recording careers, when there is a certain freshness in the interpretation, a devotion to the playing. 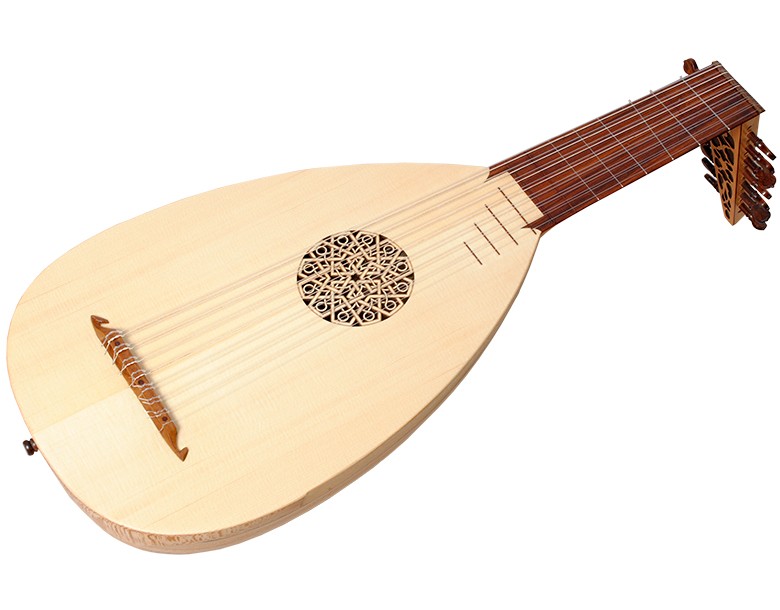 How can I judge the sound on these recordings? I have heard live performances of all these recordings except the one by Pascal Monteilhet. This is important because then I know the timbre of the actual instruments in different acoustic settings and because of this it represents a valuable material for me judging the sound of my system as well as the sound of my own lutes.

Listening very close – as you should – to these performers at masterclasses also contribute to the understanding of the aesthetics of the sound and the timbre of the lute, the idiosyncrasies of the instrument and how it is expressed in the compositions, remember: this is music flowering out of the moments and the hands of an inspired soul then…. as today. First played by the master, then written down, sometimes later by a pupil. 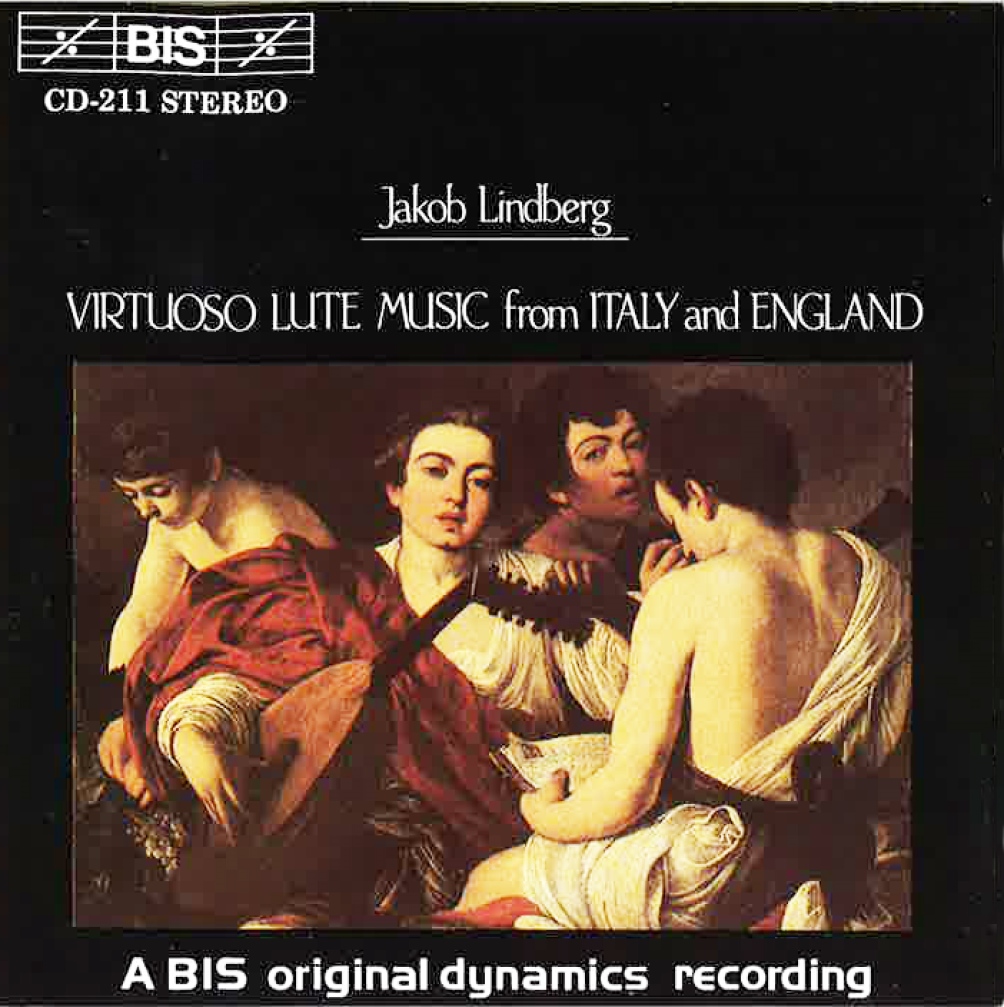 The history of the lute is also a history of western world music in general from vocal polyfony through the first written instrumental music to the reappearance of the monody in the mid seventeenth century. To understand the lute music and early instrumental music in general it is important to remember that the church had a great impact on music, defining the hierarchy where the human voice was most important down here on earth. In cosmos? Much can be said about celestrial music but not here.

Why Italy ? Then as now, the heart of the Italian people is devoted to love and style. Just look at a one of Tizians paintings, the perfect form, the intense colours, the vibrating light. Or look at a Ferrari.

In retrospect the Italian lute music represents an interesting laboratory of aesthetic development, one style growing out of the other, often opposing to the old school.

This recording covering music ca 1570 to 1630 gives a clue to this transition of styles. We hear a 30 years old Jacob Lindberg performing as inspired as he ever could and with the most penetrating clean tone among lutenists. Not a bad stroke here, only pure delicacy.

The sound is quite close micked by the BIS engineer Robert von Bahr and in my view contributing to the sucsess of this recording. It is a pity that many of Jacob Lindbergs otherwise magnificent recordings are somewhat out of focus due to a mic placement that is too distant to suit the instrument. The later La serenissima recordings for instance are less accessible because of this. 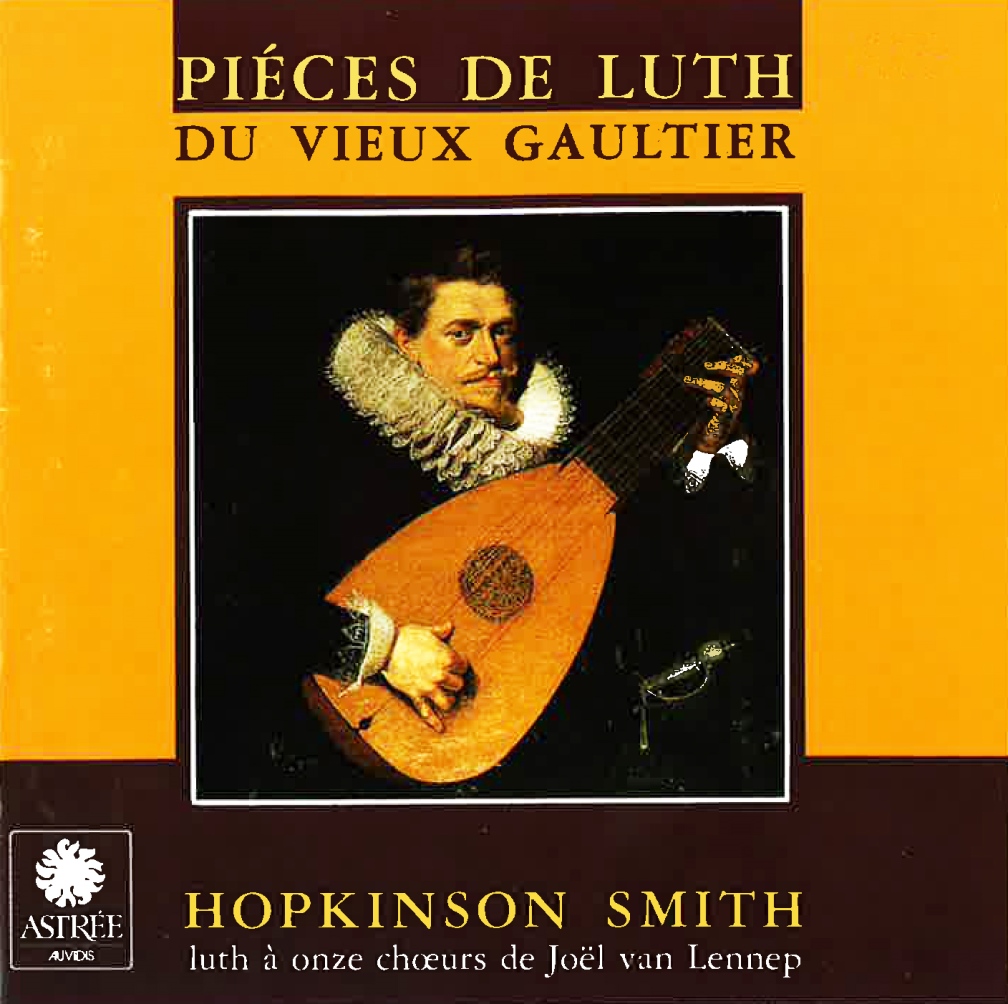 The lute is a very intimate instrument and I think the close mic technique on this recording suits the instrument and music well. The sound is right on the edge profound and big but with a tint of dryness that let your listening room decide the resulting sound. Voila; musique du chambre!

I want to add a few words about the French baroque lute style. Badly played it is a hell of a mess, flat and boring. Brought to life by a genius of Hopkinson Smiths calibre, it is fresh, modern and challenging with a unmistakingly fluidity of the melodic lines. The lutenists of the 17 th century experimented with different tunings and discovered another instrument with a sonorous richness very different from the old tuning. Finally they settled at what we today call a d-minor tuning, that opened up a new world of uncommon tonalities. So inventive was the French lutenists that the harpsicordists tried to immitate their style, the style luthé. Exactly how this music was created I can’t tell but most likely it was improvised and than palyed over and over again, forming into a polished gem of a piece. The music is often handwritten tablature, beautiful in itself and most pleasing to the eye are the preludes composed without any precise note values. Open to interpretation, I think these small pieces are representative of a very holistic idea of what playing an instrument can be. Within a frame of the style luthé the intrepreter takes the role of the composer and re-invent the piece, makes it fresh and true to the audience. 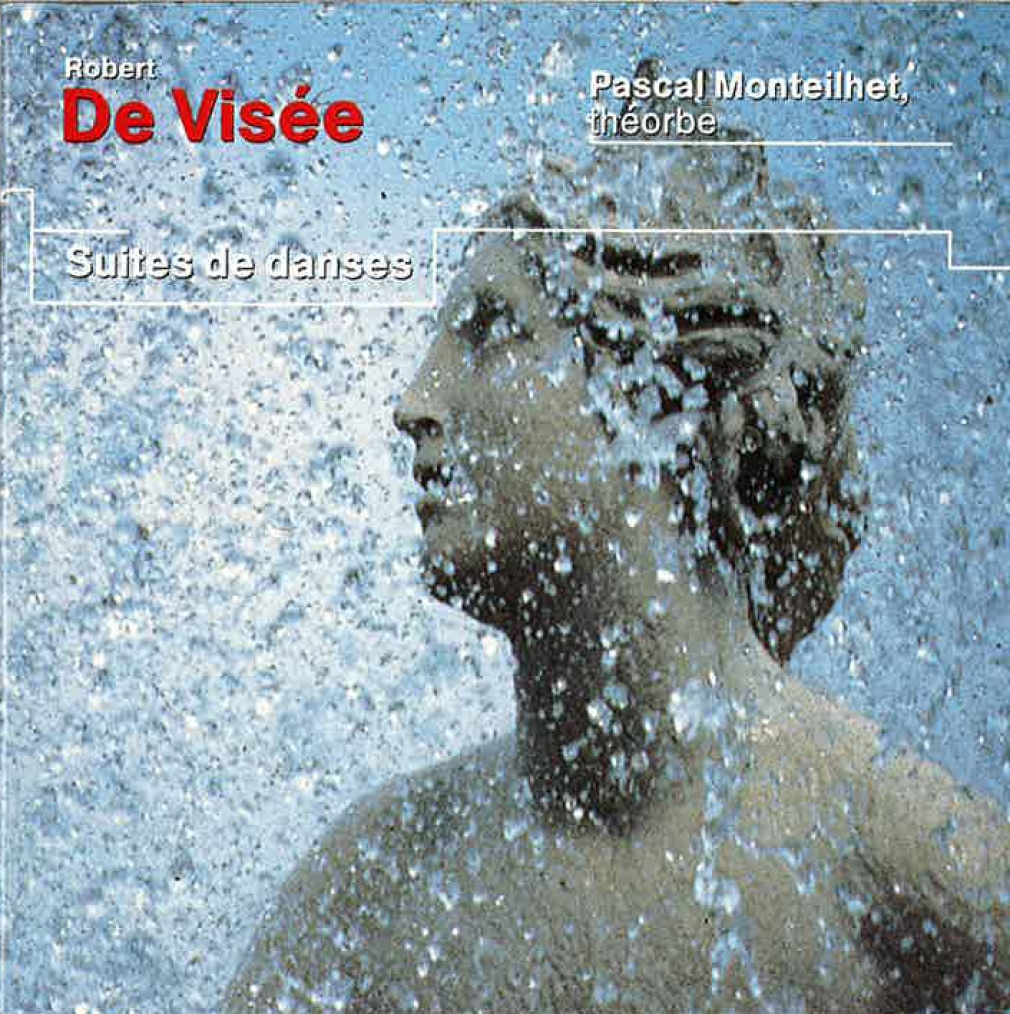 My attraction to the theorbo, and I have made a few, is the use of very long, thin strings for bass notes. I can think of no modern instruments using strings of this proportion. The physical fact is that a long thin string has a plentitude of overtones. In comparison a thick short string is perfectly heavy to swing at a low frequency but sounding hopelessly dull. This is important to fully understand the aesthetics of the theorbo style. An other important thing to have in mind is the special tuning of the instrument. According to the musicologists the theorbo was invented or should we say evolved in Italy late in the 16 th century by a member of the Camerata of Florence. The lutenists needed a better instrument to accompany the new style of song writing, musica resitativa. This style based on monody demanded a clear and simple accompainement where the lutenist followed the singer closely with flexible and articulated, occasionally very thin textured but bassdominated accompainement. In the beginning ordinary bass lutes was raised in pitch and the two top strings tuned down an octave. This resulted in an instrument with a strong clear tone and the new tuning with the third string actually being at the highest pitch opened up for the other main virtue of the theorbo, the possibility to thrill the audience with fluent melody played alternately by thumb and index or middle finger. One of the sources, the lutenist Piccinini says he himself added the extra octave of unstopped bass strings. This resembles a diatonic harp placed partially outside of the neck of the instrument. So goes the history, today we can listen to many skilled theorboplayers either as accompanists in the early italian operas such as Monteverdis L´Orpheo or performing the solo repertoire of wich we have an excellent example of here. The composer Robert de Viseé was one of the best theorbo players around then and now the music is in the hands of on of our times best interpreters on the instrument.

Pascal Monteilhet displays a unique sense of the style on this recording he makes the phrases interesting as the instrument talks to us. He manages the balancing act of give and take, to hold back a bit and display a certain dignity. Resignation? A lament?

The sound on the cd is rounded off a bit compared to the Vieux Gaultier recording and a thad less transparent but the basic things is done right, revealing the true timbre of the instrument. In the seventirs when this instrument was made there was less focus than today on the loudness of the lute instruments, they went for a rather substansial but recessed tone with a pronounced air ressonance appearing from inside the lute body. This instrument has a bit of that and it suits the performance, it feels right in the hands of Pascal Monteilhet. 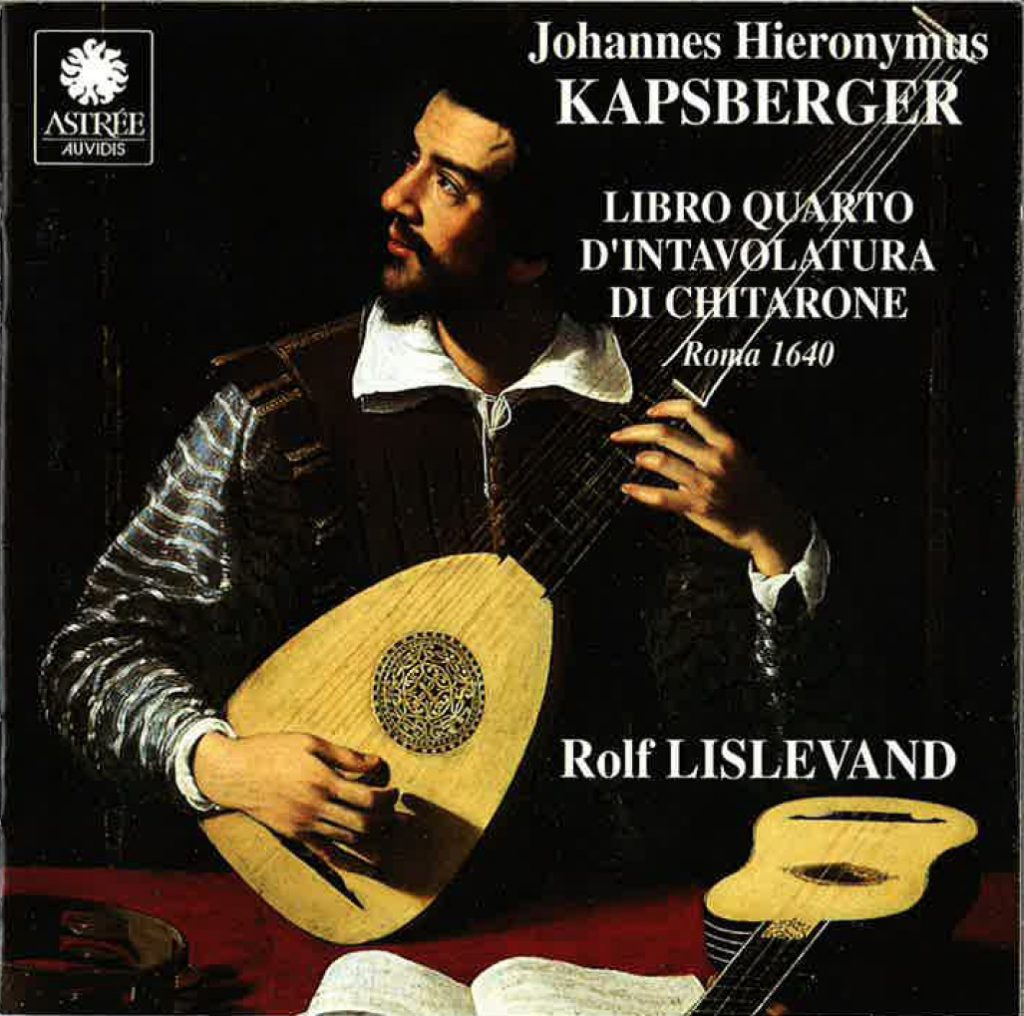 Does anyone remember Gregorio Paniagua? His La Folia recording was and still is an audio reference recording. The instrumentation was in its day very creative, adding a lot of percussion such as tablas, maraccas, balloons and champagne burst thereby creating the real foolness of the original dance. His recording shows how effectively you can bring old sources to life by ignoring the authenticity dogma. I bet it is the most played record in the early music genre among audiofreaks. Talking about tendencies in interpretative approach, when La Folia was released in 1982 the pendulum was already swinging towards a more minimalistic and ”authentic” style. The early music movement took a distinctive position against the established classical music world. The basic idea was to use authentic instruments and original sources. The musical expression is closely related to the possibilities and restrictions of the instrument, making an esthetical point out of theese. This last point was mostly ignored by Paniagua, his instruments has a modern sound but the freshness of the playing and creative approach many earlymusicians could envy him.

Then came Rolf Lislevand. His recording had some of the same effect on the public. What? Drums? Colascione? Up till then Kapsbergers chittarone music (a kind of big lute) was recorded as solo pieces, even his libro quarto that contains a basso continuo line in addition to the chittarone tablature was to one exception recorded so. Lislevands project is to improvise music today in the same way it was improvised back then, that is without a complete score so a lot has to be added. By skill and imagination a single continuo line comes to life in the hands of his six musicians. His instrumentation is based on the assumption that Kapsberger may have heard several exotic instruments during his childhood in Venice, on the doorstep to Asia, the end of the silk road. Another and more reliable source is the composer Agostino Agazzaris work from 1607 on continuo practise that advises a rich choice of instruments many of them with metal strings for instance the chitarra battente that is used here. Lislevands mantra is: play loud, play to be heard and engage. The sound is very clean due to a close mic technique. I do not know, this is speculation but it sounds like a mix of individual microphones on each instrument. The result is very engaging with a close and somewhat bigger than life soundstage but why sit up there in the rows? Why not sit down here among such excellent musicians?