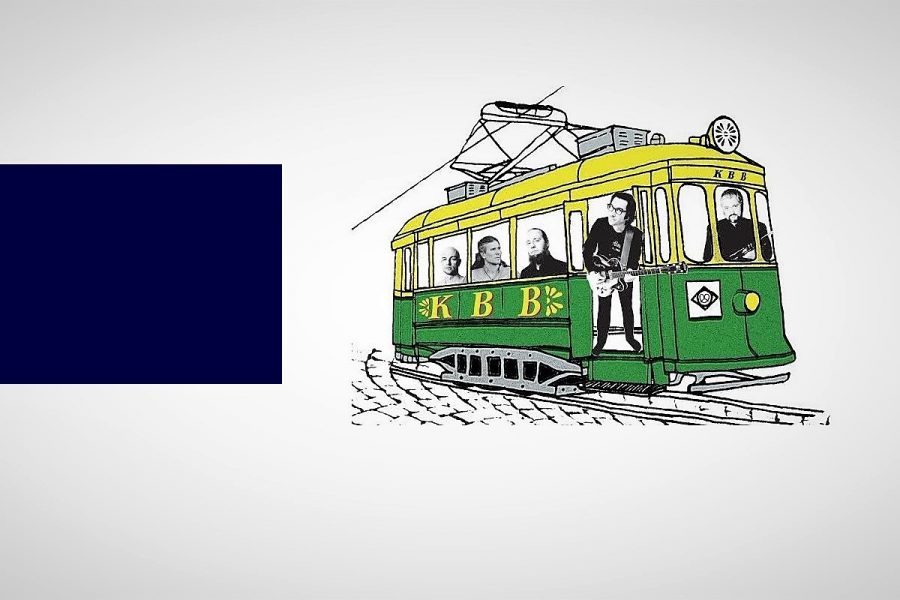 It is not just the stripped-down selection of instruments that makes the Kalabalik Brass Band so intriguing; what is, is the sound – harmonics, dynamics, color – that the band is able to create out of its seemingly scarce resources, mainly thanks to Roni Martin’s (and Samppa Leino’s) carefully thought out arrangements. The prerequisite for making all this work in practice is to have a handful of first-class musicians, and that’s exactly what the Kalabalik Brass Band consists of, all highly experienced rock/jazz/flamenco/classic music  musicians/multi-instrumentalists.

You mentioned that you’ve got the band for fifteen years now. The same configuration throughout?

”Yes, 15 years if we consider the core of the band with the percussionist Karo Sampela etc. But Kalabalik Brass was born in 2013 when we started to work on Kill Carmen, that’s when I wanted to take wind/brass instruments along in a big way, … I’ve been working together with some my brass players for more than 20 years. Let’s put it this way: if you dissect the Spain part from the Kill Carmen group, what is left of it, is the Kalabalik Brass Band. Also, the same brass section appears in many of my other studio projects nowadays.”

One of the things that stroke me with Kill Carmen was that there was no bass guitar at all. Instead there was this huge trombone called sousaphone that took over, and the same is true of the Kalabalik Brass Band. Why was that?

”Yes, I absolutely not wanted to use a bass guitar for Kill Carmen. By going for the sousaphone for the bass I could avoid all the mannerism associated with the electric bass guitar or other stringed bass instruments. With the sousa it’s more like singing, and less like doing sport. With the sousa in the background I’m able to create a completely new kind of rock & flamenco sound. There’s also a Balkan connection. I remember having listened to Goran Bregovic’s album “Tales and Songs from Weddings and Funerals” from my car stereos, and having been very excited about their brassy sound. Like flamenco, it’s got this street music roughness to it, but of different kind, I wanted to combine various elements from both.”

With the sousaphone on bass, Kalabalik Brass Band’s sonic world is really one of its kind. If you had to analyse it …?

”The dynamic range is huge. We are only five but it sounds like a true big band. If you come to think of it, I with my guitar am the only one in the band who plays harmonies, and as I do the vocals too, that gives me many degrees of freedom … basically I can play what I want and how I like on top of the others. On one level, everything that you hear is super-arranged, and it has to be, in order to create certain tensions in music, that you get only by leaving a lot of room for improvisation. It’s like we’re playing jazz and rock but with a flamenco logic. That is why we train like a mad, all members know precisely what has been agreed so that when on stage we can take certain liberties …”

”The rhythm section, the sousa and the drums, that’s the basis for the dynamics. I consider my guitar as as a symphony orchestra interacting with the other instruments. By adding just one upper string it’s like adding violas and the lower strings bring the cellos in and so on … and the brass instruments are then accenting. Samppa Leino’s multi-instrumentalism also has a major role in this. Since he plays at least eight different instruments in our shows, it gives us pretty amazing amount of combinations. Besides being an amazingly skilled musician, he’s also conducting, arranging and composing for many orchestras around Finland, so it’s only natural that he takes part in doing the arrangements too …”

So there must a bass instrument of some sort?

”Absolutely. I’m very interested in old music from New Orleans. Ever since the French colonies introduced America the instrumentation: the brass, the snares, the bass drums and it was combined with Afro-American rhythms, the music that was born from that is the basis of pretty much all modern western rhythm music with a back beat. And there is a lot of common ground with flamenco, much more that people think. In flamenco there’s african influence, indian of course, jewish influence, and so on.

The pulsating center of the Kalabalik Brass Band is the bigband percussionist together with the sousaphone, and the rhythm guitar. A brass band it becomes when two brass instruments are added, and that’s it.

”The sound or tone itself is a result of decomposition and intervals between various instruments, the baritone saxophone, flugelhorn, euphonium … sometimes it’s me who supports the sousa with my guitar, at other times it’s the baritone saxophone and so on. It’s the rhythm that generates the required tension in our music: the accompanying instrument, the rhythm instrument, and the soloist. The way those three elements are rhythmically related to each other is what I take from flamenco. Also, nothing new really, a universal thing.”

Is it necessary to have a microphone for the sousa? At the concert, the sound of it occasionally masked other instruments and vocals.

”It is necessary. It wouldn’t serve as a proper bass without it, especially as everything else is coming through the PA system too. Actually the natural sound of the sousa is very different without the mic, a kind of thin toot, and couldn’t compete with the other instruments. For the new album the sousaphone was recorded with a ribbon mic, and i’m really happy with that sound.”

You play the guitar now, but that hasn’t been always so?

”As a little boy I started playing classical guitar as a trainee at the Conservatory. Piano got into my life as a teenager one reason being that my left-handedness caused me its own technical problems as I was forced to play guitar right-handed at the Conservatory and then my left wrist got its share of bad luck in 1991 when I was playing hockey and so on.  Piano, guitar and vocals … were basically all there till the beginning of the 21st century. A more significant transition to the piano took place with the entry of flamenco in my life in 2003. By that time I felt that I had got from guitar playing what it had to offer.”

And you didn’t envisage a career as a flamenco guitarist?

”After moving to flamenco, I definitely did not want to be a stereotyped flamenco guitarist repeating all the immediately recognizable flamenco guitar idiosyncracies. So I started avoiding playing guitar altogether. And still, when I’m composing, I’m mostly composing with my mid 70’s Kawai piano.”

Curiously giving up piano later on also had to do with flamenco?

”Yes, it gradually happened when I assembled my own flamenco band in 2005 or so, and when I was lucky to meet Pablo Suárez. Pablo is a virtuoso flamenco keyboard player, one of the best in the world. It did not make any sense that I myself would have played keyboards in my band. I was rather a band leader and a singer. The guitar returned along with the Kill Carmen project in 2012. Before that I had not seriously played an electric guitar for almost ten years. It took a lot of discipline and routine to get my technique up to par again but being what my wife calls “a total monomaniac” I also enjoyed that process. Then, three weeks before the Kill Carmen premier I had a little skating accident and hurt my left wrist again! So I played those shows with a wrist brace. But later as I watched the footage from those shows I couldn’t hear any difference in my playing, brace or not! Anyway, moving back to the guitar felt really good.”

”Well, we just returned from Guadalajara Mexico where we performed Kill Carmen three times at Teatro Degollado as part of the Festival de Mayo art event, and we’ll have a tour around Finland in autumn with 30 concerts or so … and there are some other projects.” 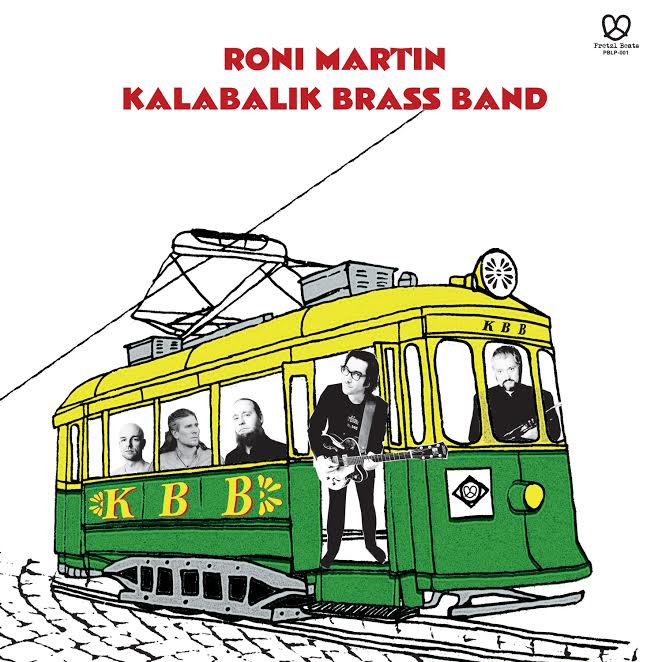 Roni Martin & Kalabalik Brass Band released a new album in May. It’s an album that combines elements from flamenco to rock and as described, is influenced by the multicultural musical tradition of the Balkan region.

The new album is an ode to Helsinki, which for one and a half centuries has been a meeting point for people with different  cultural backgrounds. As a second-generation immigrant himself, Roni Martin wanted the cultural layers to be heard in the music he wrote for the album. So by its very nature, the album is local (the lyrics and titles of the songs are local) and small-scale rather than international and grand.

The music is grand and international, European more than Anglo-American. It also has nostalgic connotations. A man walking around his city, making observations in a haphazard way, and writing songs about what he has seen and the feelings aroused.

To celebrate the release of the new album the band gave two concerts. Comparing the concert to the album, it’s clear that if one wants to hear and experience the full sonic effect of the five man bigband, one has to be present and see the live performance. The sonic fireworks is incredible in more than one way. It has to be heard in order to be believed: mics and hifi systems cannot do full justice to the sound of this band.

There are, however, tracks on the album that are able to give an fairly reliable impression of what it means to have a sousaphone play bass, and more generally what this combination of instruments can achieve in terms of harmony and dynamics, and in regard to the sheer volume and power of the sound that often overrules the melodic content.

Hard to say whether Roni Martin has exhausted the resources of his combo of instruments, hardly, but listening to this album should encourage musicians as well as ordinary music listeners to drop their prejudices and face out different instrument combinations. It’s an inspirational album, and a splendid example of Roni Martin’s musical language and  thinking.

The disc has been produced and mixed by Roni himself, and it’s available on CD and LP.

Compañía Kaari & Roni Martin: KILL Carmen will have 28 performances this autumn. The first one will be held in Helsinki at the Cirko Maneesi Hall on 25.-31. October, thereafter in  Jyväskylä City Theatre on 1.-2. November, Ylivieskan Akustiikka Hall on 5.-6. November and Kemi City Theatre on 7.-8. November.