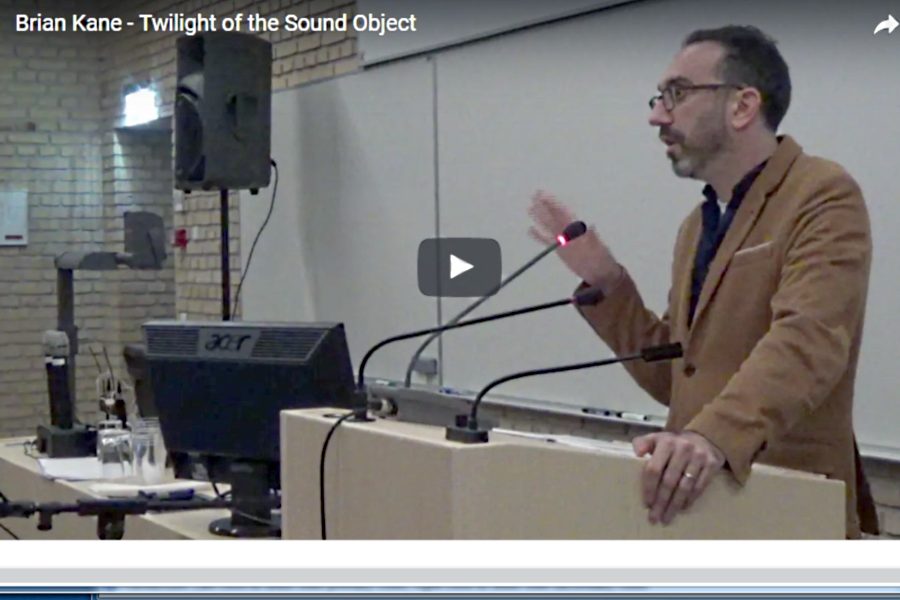 The Faculty of Arts of Aarhus Universitet has uploaded videos of four full conferences from the past Sound Art Matters Conference 2016, covering sound art from different approaches. The lectures can be found here:

In her talk on Art: Sound: Matter Frances Dyson explores current relations between “art”; “sound,” and “matter”, and discusses some of the discursive and aesthetic contributions that sound makes to the broader cultural and eco-political fields. The talk offers some speculations on an aurally inspired understanding of what matters, and how to know what matters.

In his Listening to Sonic Expressions with Media-Archeological Ears Wolfgang Ernst addresses “implicit sonicity” – sound in its temporal form – in order to reveal the hidden epistemological implications of sound itself. ”The almost immaterial sonicity of electro-magnetic waves make “sound matters” not simply a phenomenon in acoustic culture but a fundamental event of being-in-the-world.” Ernst analyses the asymmetrical relation between “sound” (as signal event) and “music” (as code) – which is turned upside down with “digital” sound which is the mathematization of sonic matter, and asks if the current interest in sound is “post-digital” nostalgia for vibrational matter? He believes it is techno-logical analysis (such a spectrography and Fast Fourier Analysis) which has a better “understanding” of sound matters than human hearing itself.

Is the current interest in sound only “post-digital” nostalgia for vibrational matter?

In her lecture Why Not Our Voices? New Listening and New Worlds in the Sonic Imaginary? Cathy Lane makes the questions: Are sound artists taking up the challenge of offering new ways of knowing or changing the world, and can sound art act as tools for radical change by ‘de-conditioning’ our listening? The presentation considers how a new listenings might lead to a richer more inclusive sound art that can embrace and celebrate difference.

Brian Kane‘s Twilight of the Sound Object deals with Pierre Schaeffer, the inventor of musique concrète, but rather than trying to reconfigure Schaeffer’s ideas to fit the changing demands of contemporary music or sound art, Kane aims to listen to the archive of early musique concrète anew, not for its aesthetics but rather its kinetics: the bodily gestures and kinaesthetic sensations of composers, engineers, and technicians, as they worked with the technology in the studio. Kane believes paying attention to the kinetics of musique concrète discloses unexamined networks of techniques, practices, and historical relations between various forms of electronic music (avant-garde and popular) and sound art.