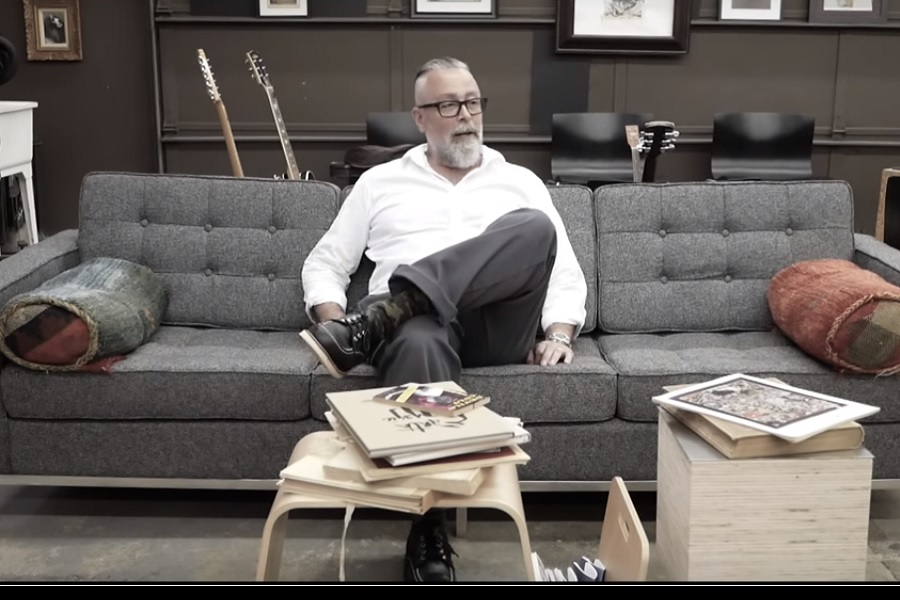 Apart from his artistic ambitions Michael Lavorgna is a sworn audiophile and – having a professional background in IT – also the Editor of Audiostream.com, Stereophile’s web publication of computer audio. He’s also well known for his Road Tours for 6moons, in which he made a bold attempt to find out and understand what makes hi-fi so important for so many. Before Audiostream, he kept a personal blog, Twittering Machines (named after the Paul Klee work) devoted to music (LPs), art, and other stuff.

Inner: How did your own hi-fi career begin?

Michael: My dad was an electric engineer and an audiophile so I grew up in an environment where the arrival of a new hi-fi component in the home caused a lot of excitement and led to lots of listening. I graduated from Bennington College with a degree in Fine Art so music and hi-fi became the bridge where my father I would meet. This interest has also led to many important friendships so you could say that hi-fi and music hold a very special place in my life.

Inner: AudioStream.com was established to “make sense of the evolving world of computer audio and getting the best sound from your computer-based audio system”. After a few years, how do you feel now? Has the site managed to achieve what it was set up for?

Michael: I feel the site is a work in process, which is the nature of any web-based publication and especially one devoted to computer audio since things evolve at such a rapid rate. If I were to take a critical look at the work we’ve done so far, I certainly see areas that can be improved upon but I’ll quietly work on those and refrain from pointing them out so hopefully no one will notice … ha, ha … But on a more serious note, I feel a great sense of responsibility to emulate the professionalism that John Atkinson and the rest of the Stereophile team have established because of our association and because I believe its the right way to go about this business.

Michael: “Going online” and its relatively low barrier to entry certainly allows for very focused websites whereas the costs associated with a physical publication would make such ventures with necessarily limited appeal cost prohibitive.

Inner: It appears as if the web had generated new, different type of audio journalism, quicker and shorter. Would that, if true, be a threat to quality audio journalism?

Michael: This is a great question and its something I struggle with on a daily basis. Certainly the pace of a web-based publication forces you to produce content on a more regular basis as compared to print. At AudioStream, I publish one review per week, sometimes more, as well as additional topical content including show reports. We also have additional writers who contribute reviews. So we are generating more content at a faster clip. The struggle is to maintain a consistent level of quality. Thankfully, I have an abundance of curiosity and genuine interest in the work I do. I also enjoy a challenge and feel very fortunate to be doing what I do for a living.

Inner: Have you noticed that the web would have changed the mutual relationship between the  manufacturers/advertisers and audio magazines?

Michael: At AudioStream, or more importantly at Source Interlink Media my employer, there is a very real and clear separation between editorial and advertising functions. Everything to do with advertising is handled by a dedicated group of people so I’m free to focus on my job as Editor and reviewer. I become aware of changes with our advertisers when I see their ads show up or disappear from our site. Since I’ve never worked on the print side, I cannot make an informed comparison.

In my experience, the differences between DACs are as great as those between other components such as preamps, amps, etc. And this is part of what I find so fascinating. The designer’s fingerprint, if you will, is impossible to remove from the equation even if their stated goal is absolute transparency.

ML: I read Stereophile and I check in with a number of audio-related forums and blogs on a daily basis to see what people are talking about. I used to read Art Dudley’s Listener and I have complete sets of both Listener and Sound Practices, another oldie but goodie. My favorite magazine is, and has been for some time, The Wire, the UK-based music magazine.

As far as other audio journalists go, I would say that I’ve most enjoyed reading Art Dudley and Herb Reichert. I also very much enjoy reading my friend Stephen Mejias’ writing in Stereophile, both in print an online. I think Stephen has a unique voice and vision which are very rare qualities in our little pond, at least in my experience.

Inner: In your AudioStream reviews you offer up quite a lot of space for describing the sonic qualities of various digital devices. With your experience, how great, in some perspective, are the differences in the sound quality between such digital products as dacs?

Michael: In my experience, the differences between DACs are as great as those between other components such as preamps, amps, etc. And this is part of what I find so fascinating. The designer’s fingerprint, if you will, is impossible to remove from the equation even if their stated goal is absolute transparency.

There are a number of areas where DACs differ in terms of sound quality but I’d say the most prominent include an overall sense of dimensionality, timbral richness, and resolution. To my way of hearing, the DACs that are most engaging and simply more fun to listen to balance these elements and do not favor one over another in an obvious way. For example, I’ve heard DACs that sound as if they’re performing a surgical procedure on the music, carving out detail at the expense of tone while offering up a relatively flat sonic picture. This kind of sound does not hold my interest for long.

Inner: Are the dacs of today generally better sounding than the dacs five years ago?

ML: In general, absolutely. I’d attribute this to improvements in hardware, software, and also to the ability to handle higher resolution PCM and DSD playback. I’d also suggest that file-based playback offers improved performance as compared to disc playback and it does so at very competitive prices.

Inner: The same question regarding HD music. Is the difference in the sound quality obvious with respect to the CD quality?

This also illustrates the importance of knowing where a HD version came from, what we’ve been calling its provenance, and I hope to see more download sites as well as the record labels themselves work on providing this provenance information so consumers can make informed choices.

Michael: The simple answer for me is if a recording I’m interested in exists in both formats, I will generally get the DSD version because it sounds better.

Inner: Will the HD downloads remain the privilege of the margin, while the crowds use Spotify, Youtube and other such lesser-than- the-CD means?

Michael: We are starting to see non-audiophile music retailers like Bleep and record labels like Ninja Tune offer 24-bit downloads so I am hopeful that we are moving toward greater access to HD downloads. The recent news that Acoustic Sounds now offers DSD downloads of classic recordings is a very important development. We’re also seeing higher profile groups like Grammy.com and the Consumer Electronics Association (CEA) get on board with promoting “High Resolution Audio”. And then there’s Neil Young’s Pono which may or may not come to fruition…

One of the most difficult aspects of my job is to adequately convey what it is I’m hearing and to do so in a clear, consistent, and hopefully engaging manner. These are my primary concerns when writing reviews.

There’s also no doubt that streaming services are becoming increasingly popular and for good reason. As a music consumer, having access to millions of tracks for dollars a month is an appealing proposition. However, it remains to be seen if this model can provide a sustainable and profitable business. Of greater importance is their impact on artists. There have been a number of high profile artists like Thom Yorke of Radiohead and David Byrne who have pulled their music from streaming services citing a lack of adequate revenue.

As is the case with most things, I think we’re ultimately looking at different groups of people with different levels of interest. For those people who use music as a background for daily activity, streaming services are certainly good enough. For those people who want a deeper and more immersive experience with their music, quality enters the equation.

Inner: The five most interesting websites for HD music downloads?

Michael: I like Qobuz, Bleep, Archive.org which offers tons of free HD downloads of live performances, and HDtracks. I’ll reserve my 5th choice for the future.

Inner: I know I should not ask this … What do you make of the so called “cable debate”? Are we any wiser now than 20 years ago?

Michael: I think the cable debate is pure silliness. Hi-fi is hobby whose goal is the enjoyment of music. It is not some science experiment so people have to realize that they cannot dictate the terms of other people’s enjoyment.

One of the most difficult aspects of my job is to adequately convey what it is I’m hearing and to do so in a clear, consistent, and hopefully engaging manner. These are my primary concerns when writing reviews. I have an obligation to our readers to provide honest, well-considered, and thoughtful commentary and my belief is this is the secret, which is obviously no secret, to continued success.