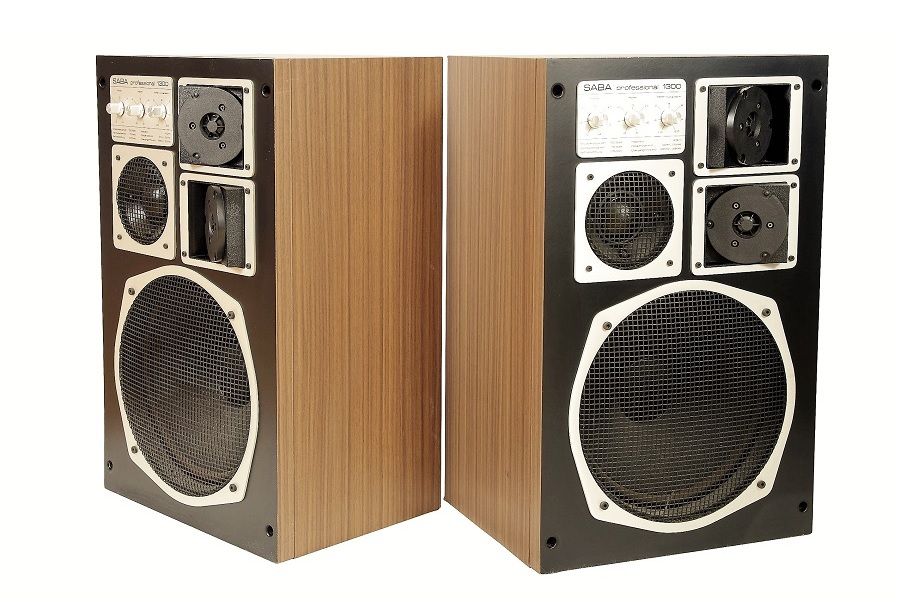 Siemens and Telefunken. Who would not remember these two German giant centenarians (founded in 1847 and 1903) famous for their radios, amplifiers, speakers, microphones and what have you. Braun and Grundig. Many still remember Grundig’s 1960s table radios and tape recorders, as they remember hifi equipment and hardware Dieter Rams designed for Braun as well as Braun shavers, coffee makers and alarm clocks.

What else? Loewe. Nowadays we associate Loewe with stylish flat TVs, but the company was in fact founded already in 1923, and was once a pioneer for radios and radio tubes, their first TV being from 1929! It was Loewe that made one of the world’s first cassette players in the 1950s and Europe’s first video player in 1961, etc. Something else? Neumann, of course, the giant of pro electronics maker with legendary microphones and cutting lathes.

But SABA? Who has even heard of SABA despite the fact that the company was once of the same caliber as the ones mentioned above and one of Europe’s largest radio and TV manufacturers.

According to radiomuseum.org, SABA, the Schwarzwälder Apparate-Bau-Anstalt, was founded by Joseph Benedict in Triberg in 1835. The factory produced letter scales, small metal products, razors, bells and bicycle bells. In the 1920s, Saba’s engineers were inspired by the Eiffel Tower radio demo and began to counteract the production of radio components (transformers, capacitors, coils, resistors, etc.) to the growing demand of radio enthusiasts.

By 1935, SABA was Europe’s second-largest radio equipment manufacturer right after Telefunken. Three years later, the millionth SABA left the factory, many of them for export while during the war SABA was also preoccupied by producing radios, receivers, radio transmitters, field telephones and trackers for the German army. When the bans set for German manufacturing industry were lifted in 1948, SABA re-launched its radio production. In the 1950s, Grundig was the number one in Germany, North Mende second, Loewe Opta  third and SABA in the fourth position. But by the 1960s SABA was again one of Europe’s largest television suppliers. It also made stereo tuners and amplifiers, car radios and tape recorders and speakers.

In the 1970s, as a result of corporate restructuring, SABA was sold to the US GTE Group, which in the 1980s abandoned the consumer electronics due to the pressure coming from the Japanese electronics manufacturers. Consequently SABA was sold to the French Thomson-Brandt group, after which SABA continued its life as a marketing company and brand. And that was that. 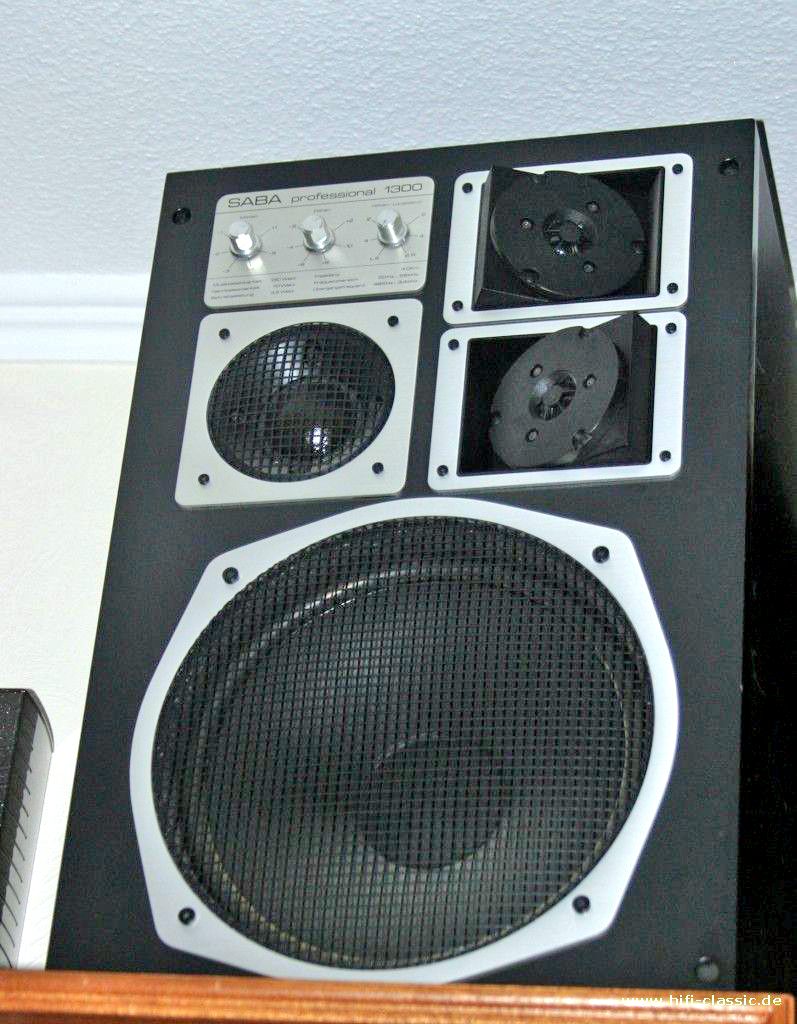 Already in the 1930s SABA made dynamic speakers after the patent by Rice-Kellog, as did basically all other speaker manufactures at the time. The production continued till the end of 70s early 80s. The Professional 1300 is one of the last speaker models ever made by SABA.

The front panel features tone controls for mid and high frequencies. In addition, the speaker has a rotary switch for regulating the relative energy of the two overlapping and crossing (90 degrees) tweeters. The control is called Treble-Localisator and its aim presumably is to increase/decrease the sound’s spaciousness, make it more or less diffused. 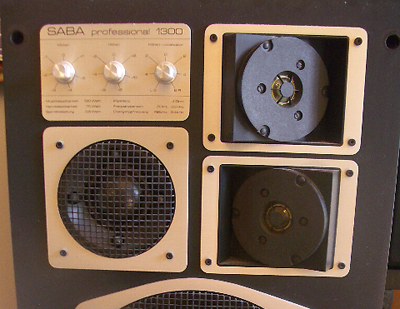 For the listening session I used amplifiers from the same period:  Japanese NEC transistor amps (until the amp started to produce audible distortion from one channel). From what I managed to hear I’d say the sound of the Professional 1300 is not uninteresting or dull. The tonal balance was more or less correct. Both the bass and the mids were reproduced quite satisfactorily althought the tone had a slightly anachronistic character. Overall, however, the presentation wasn’t too soft or woolly in the way some British speakers from the same time period can be. There was an obvious potential here.

The treble remained a question mark though. Somehow what was coming out of the two tweeters (the controls at the zero position) had a cheap flavor in it but this characteristic as well as the overall nature of the treble, including the possibilities of the treble-localisator, really should be subjected to further confirmation.

The SABA Professinal 1300, although looks a bit like the Yamaha NS1000, is not quite on par with it and certainly doesn’t share its reputation. But this speaker deserves not to be it forgotten either. Forty years back it cost 600-700 German marks, which made it a speaker not everybody could afford. Even today collectors appear to be willing to pay not an unimportant sum of money for a healthy pair. So I guess there must be something to this rare speaker by the classic German HiFi company. 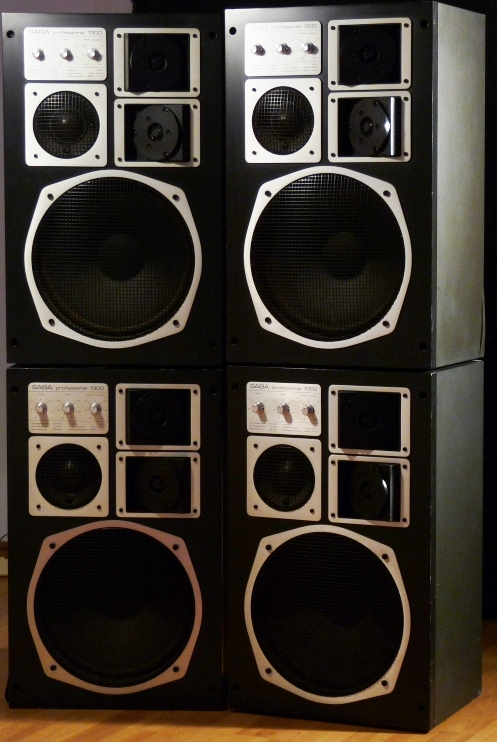 A reader who seemed to be well aware of the background of these loudspeakers, approached Inner and sent information that was missing from the original article. He himself had four of these speakers that were manufactured from 10/1977 to 1981. Apparently, after 1981 there was another speaker from Saba with a very similar design: Saba Acoustic Monitor 140 with 6 litres more net volume than the 1300, but that model  was short-lived. 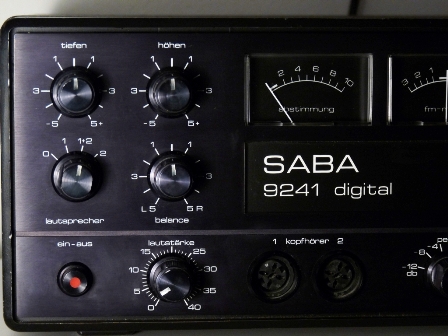 Here’s how the reader sums up his experience with these speakers: ”I still really like the way the system performs, especially when four 1300s are connected to the 9241. I bought one original woofer for the 1300 as a spare part but I don’t think I will need them at least in the near future. Over the last 20 years I’ve built many speakers/subwoofers for HiFi/Car-HiFi or PA, and most of them have gone to happy owners. I am pretty sure that my 1300s will never leave the house. It’s almost a “cult” thing to own them, and they still look quite cool. There are even communities such as “Saba-Forum ” for Saba enthusiasts with downloadable brochures, tests, etc.” Here’s one: www.magnetofon.de