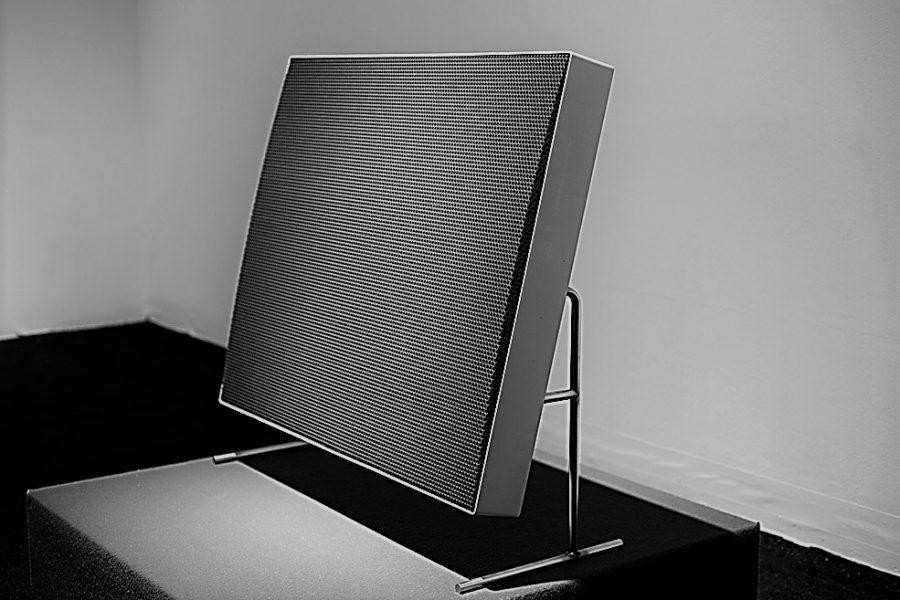 INNER does not do daily news on product launches. The perspective is more long-term. Every now and then we may, however, piece together news on unusual, in one way or another, products that seem to possess value that goes beyond the product itself. This seems to be the case of the the examples below, and the said value in their case has to do with their aesthetics.

The first is Metaxas & Sins’ new reel to TRX reel tape recorder “built like a Swiss watch” and ”purposefully designed for ne-plus-ultra Hi End Audio … mechanical beauty, harmony and musicality, using the absolute latest in hi-tech motor technology [Swiss Maxon] in partnership with the cutting edge in discrete single-ended circuits and NOS “Heads” from the 1960’s… totally hand made [Bespoke] in a very limited edition”. 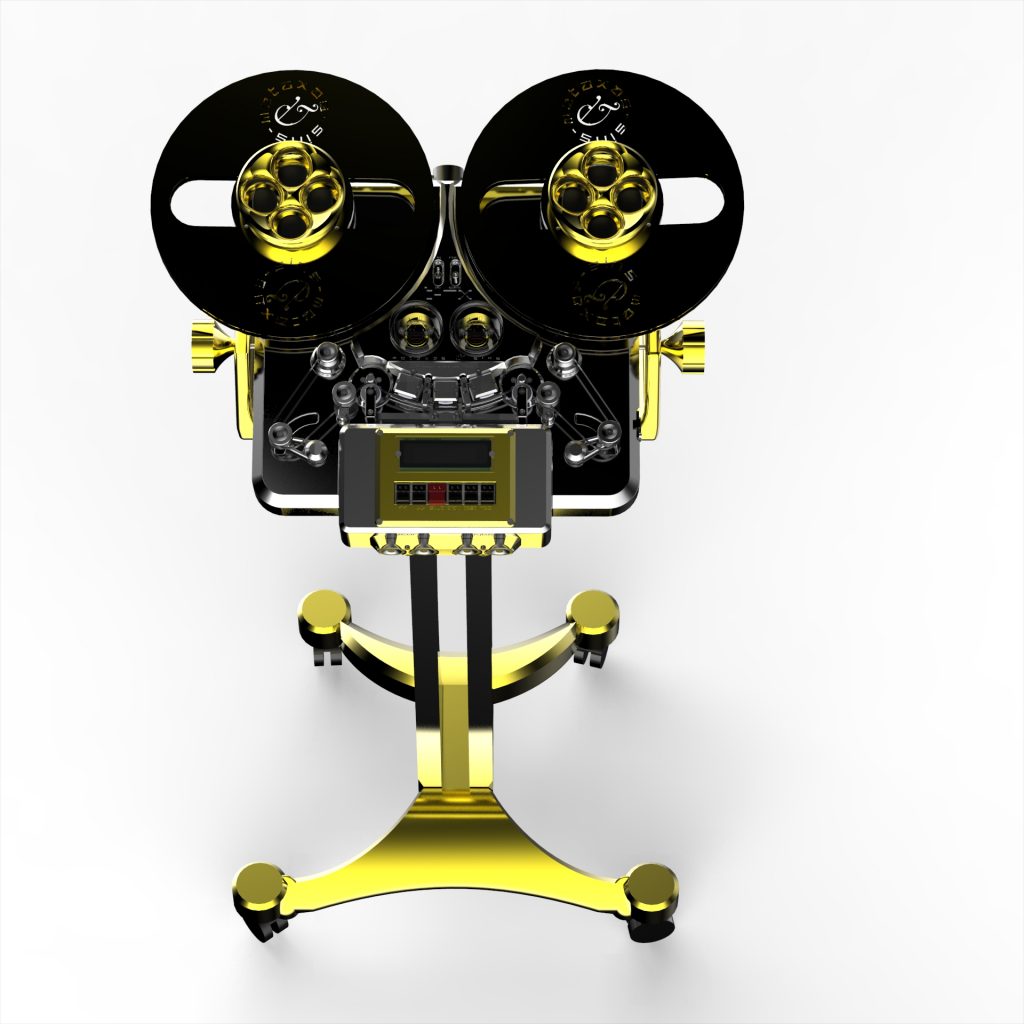 It’s elementary not to like its outlooks. To condemn it as exaggerated and too abundant, the colors too bold and flagrant, and overall, given that it’s a piece of technology, too unconventional, somehow utterly unthinkable and impossible.  Sexually scary even.

Hifi hobbyists, who often build their self-esteem on the presumption (pretension) that the only thing they care about is technological reason, are like civil servants who on purpose dress badly, are very strict about dressing badly, and spend plenty of time for not deviating from their standard. Against that background the Metaxas design, not limited to the new TRX only, is kind of refreshing. It does not pursue any mild redesign, a slightly skewed looking angle, but comprehensive, bold and audacious approach, a complete break with what the traditional design is able to offer us. Like it or not, I sense that Metaxas surrealistic and luxuriant, excessive and extravagant design proposal has an important message to hi-fi circles for whom design by nature means something conservative, upstaged and outshined rather than something to be brought to the forelight. 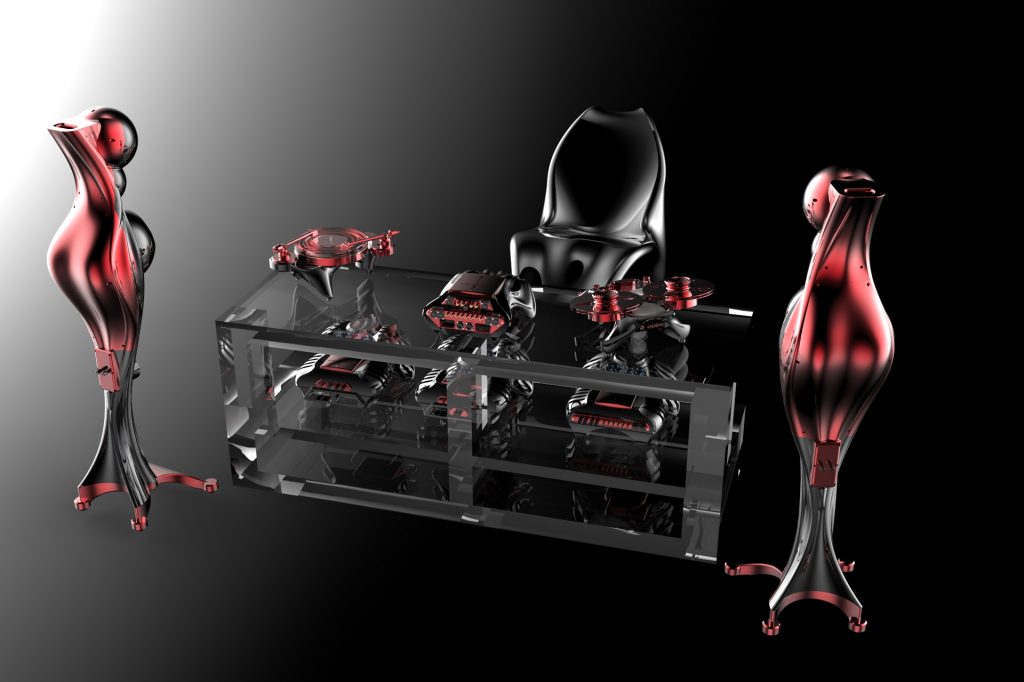 With its ‘wild’ forms, Metaxas makes intelligent fun of technology while retaining a certain good-willed and respectful connection to it. Or so I see it, anyway. The two recent examples below, the amps by YAR Audio and Oskja Origin, are far more serious and don’t go equally far but instead make an attempt to soften and dilute technicality of their gear by rounding the sharp corners, by avoiding straight lines, squares and rectangulars, and other such tricks. That’s a possibility. Im’ sure many (especially those with luxurious inclinations) would react to what they see here by saying ”Why not!” Both amps are objects for the eye rather than original technical gear to be controlled. 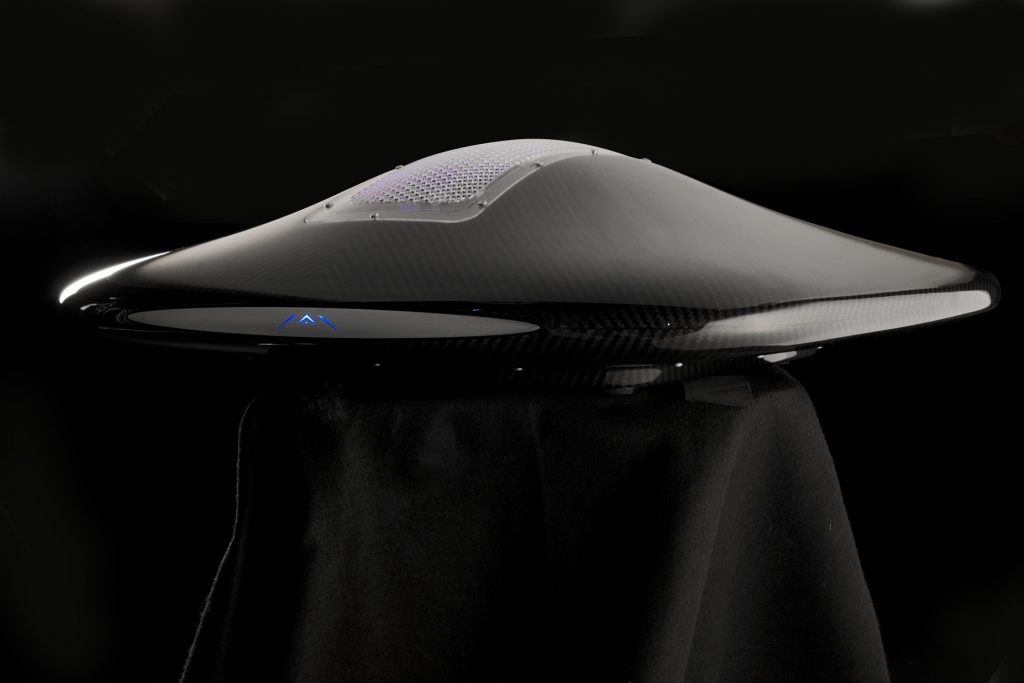 But such an approach also often fails precisely because by trying to make best of the two worlds they end up in sitting on a fence; and also because fading technicality into the background only highlights what the gear is designed to hide, namely technicality. Where Metaxas is quite explicit about what it is doing, these two are more implicit exercises. What all three have in common is their appeal to round shapes. That’s always a risky business when it comes to audio devices, and technology in general. Hi-fi is man-made, non-natural. The used forms and shapes are ones not found in the nature. Man loves to draw straight lines, and that will leads us to the next product launch: Braun LE1 loudspeaker. 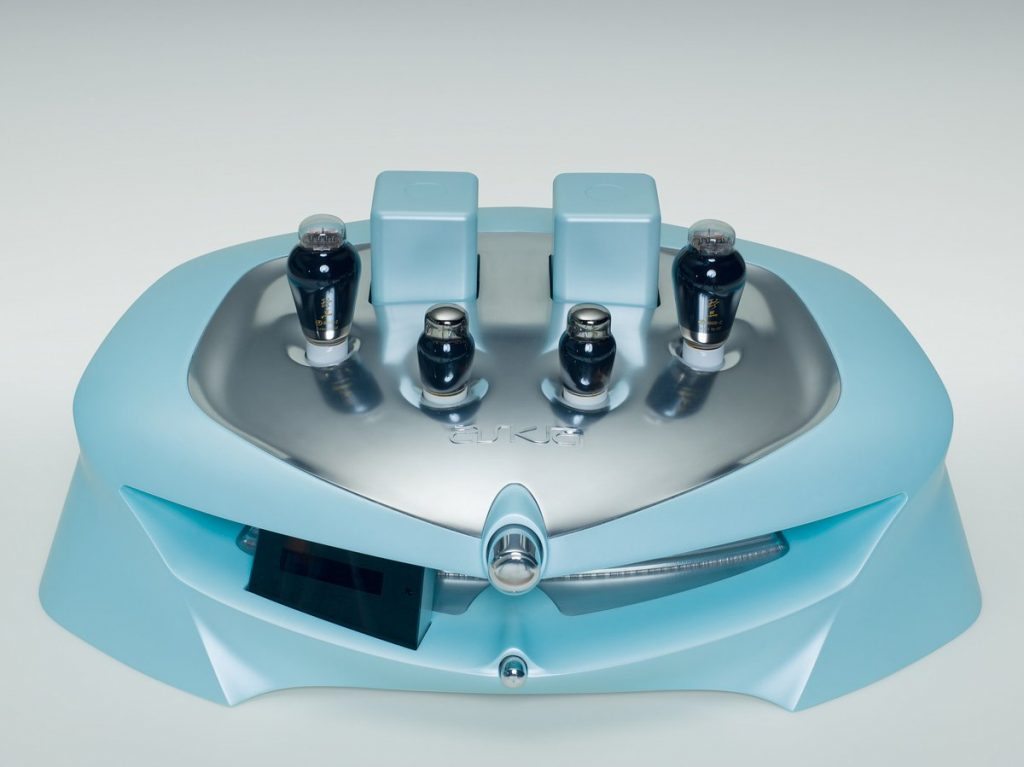 In 1957, the British Quad had released the fabulous electrostatic loudspeaker ESL57 … 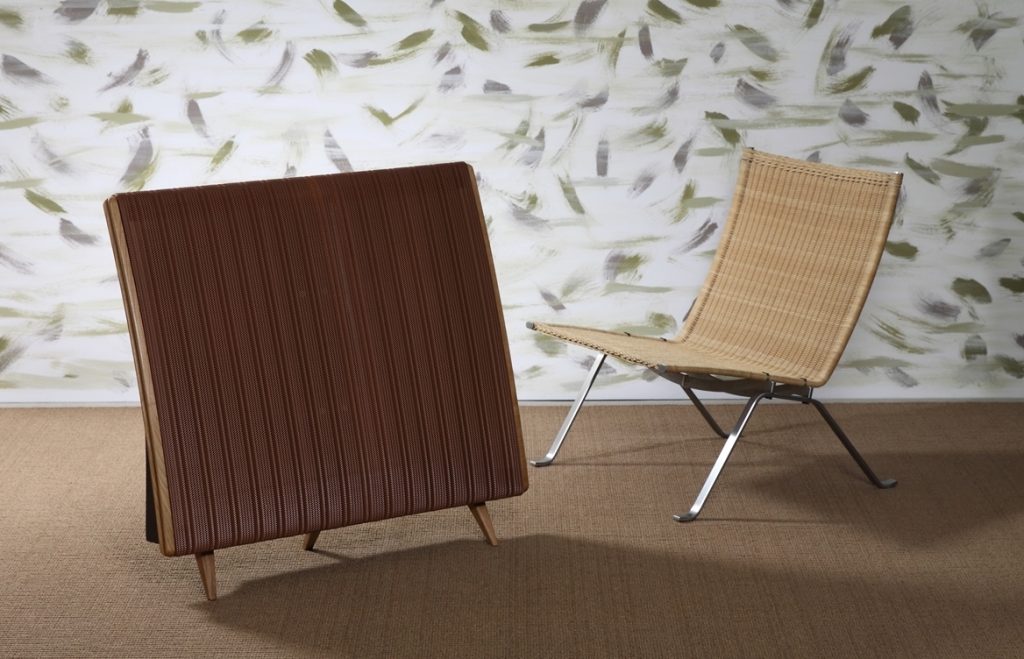 Just two years after, in 1959, the German Braun came up with the same speaker redressed and having amazingly modern looks. 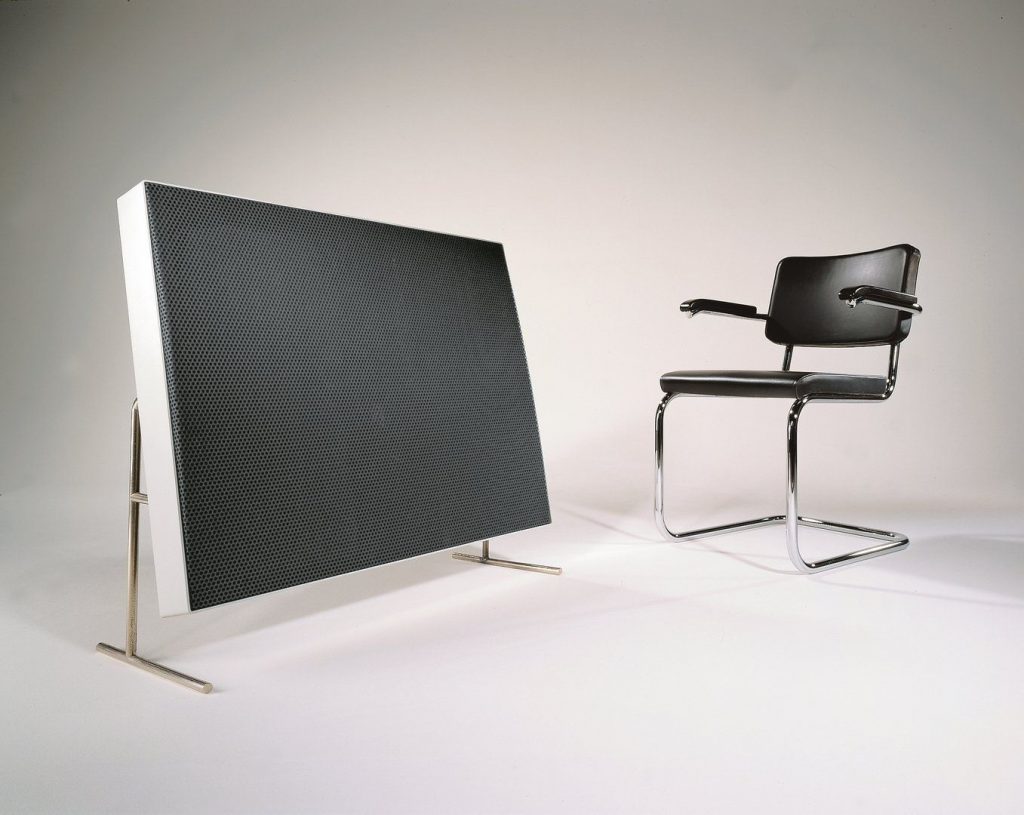 The Braun LE1 is still one of the most beautiful or at least most stylish loudspeakers ever made. Originally only 500 pieces were made. Today the originals are super rare and grossly expensive. Behind the Bauhaus inspired design of the LE1 and other Braun LE speakers was one of the most influential industrial designers of the 20th century: Dieter Rams. He joined Braun in the mid 1950s, and is known for his “good design is honest” and ”less is more” design ethos. Rams also designed for Braun the world’s first Hi-Fi turntable system with a transparent plexiglass cover (the SK 4), the world’s first mobile record player/radio combo TP 1, the first ever stackable Hi-Fi system called The Atelier, and so on.

Just recently, Braun, after 28 years of absence from the audio category (the main focus has been on a wide variety of small domestic appliances), announced reintroduction of the LE1 together with the British radio maker Pure. The latter says it now has a responsibility “for the development and manufacture of Braun Audio, under license from Procter & Gamble”. The promise is to ensure that the iconic brand ”once again takes its rightful place as the industry benchmark in premium audio.” 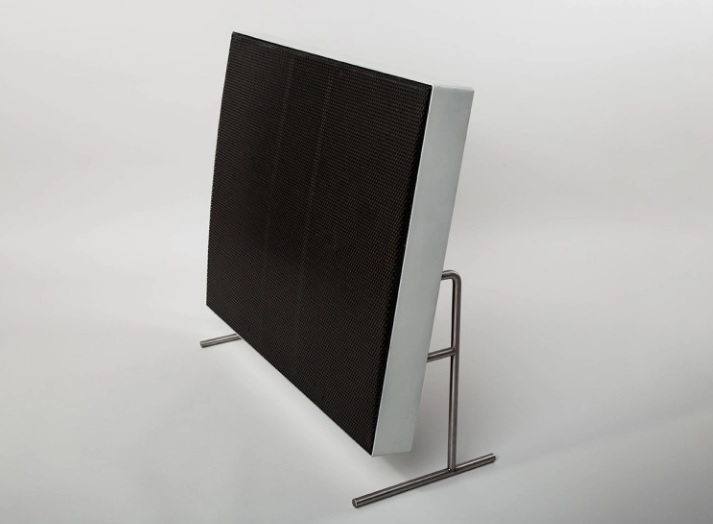 According to the press info the return of Braun Audio kick off with the reinvention of one of the brand’s most iconic ranges: the LE speaker range. The new range of cutting-edge Hi-Fi models are said to ”encapsulate the enduring, essentialist design values of their origins and built to stand the test of time”. The LE Range is also claimed, potentially worryingly, to ”combine Braun’s audio heritage and craftsmanship with state-of-the-art technology and connectivity”. Will that mean that the new LE1 carries dynamic drivers and DSP, I don’t know. But if the audio land will see reintroduction of  the Braun LE1 (the debut planned at IFA 2019 in Berlin, September 6-11) as it was in the 1960s, it will be an earth-shattering event. The speakers look bold without being intrusive and embody the perfect balance of performance and minimalist form. The purity of design, and the purity of sound.