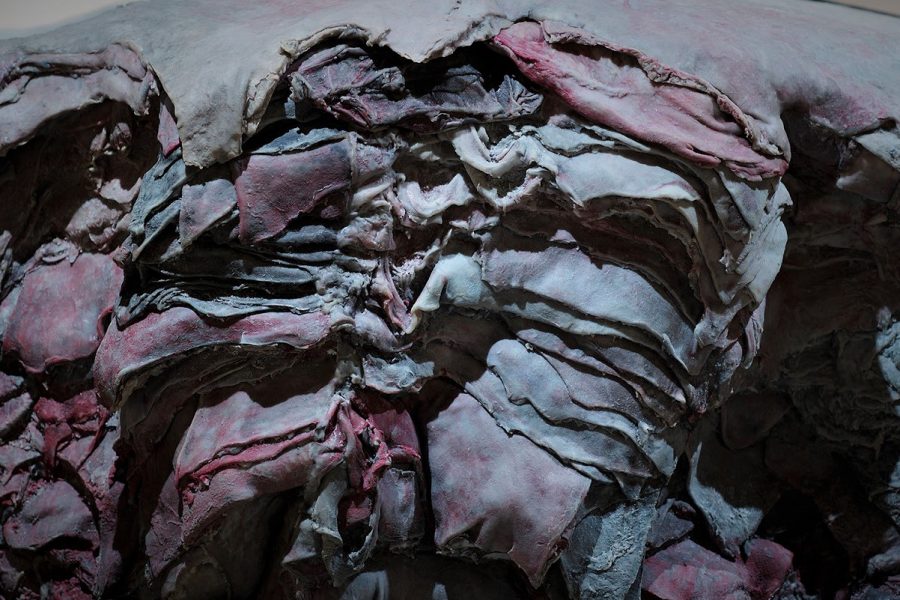 At the recent exhibition “In Search of the Present” of the EMMA Museum, the Belgian sculptor Berlinde De Bruyckere exhibited casts of real animal hides. Animal hides were made to hang from iron beams or were stacked on pallets “embodying the artist’s observations and emotional reactions of a visit to a tanner’s workshop”. (the catalogue)

De Bruyckere obviously operates here (as with other similar works of her) with the difference of contexts. The perceptions and experiences from the slaughterhouse (the smells and fluids of flaying, dehairing and tanning, the wet slush of blood, salt and soap as well as the racks of hides), where the hides are processed into usable leather, are all missing when they are dragged to a clean and tidy hall of an art museum. The aesthetic effect of seeing bare hides against all that white-ness is strong, part of the effect being the aesthetically intriguing layers of texture. As such there’s nothing unprecedented in this: many artists/sculptors trust on the shock of a suddenly changing context.

What makes De Bruyckere’s move special and impressive, albeit not unique, is the feeling of life and death indirectly present in these works. Although the hides are now highly abstracted (eg. the racks themselves can be conceived as three-dimensional sculptures), it is hard to watch the hide piles without being aware that the hides once belonged to a living creature. This makes the display of hides, with their congealed, bloody, dark and dirty surfaces, almost like an act of violence. Unpleasant on one level, highly artistic on another.

“Both repulsive and captivating”, says the catalogue.

Another important aesthetic factor in De Bruyckere’s works is their size. When the hides are later processed, they are typically cut into smaller pieces to become “just material” (chairs, bags, gloves etc.). In the final products it is often only the texture of the skin surface that is open to the viewer’s eye and mind, in addition to what is in offer for the sense of touch. “Genuine leather” is never genuine, it is always heavily processed and we’re able to access only the final stage of that processing.

Personally I don’t see any moral message hidden in the works of De Bruyckere, nor do I think such a message would somehow have to be an inseparable part of this kind of works. But there are other views: “The viewer is forced to come face to face with death, which in the West is kept separate from everyday life. For animals, particularly those in industrial production, the encounter with death often comes after a very short and sometimes painful life, and quickly and brutally. The animal ends up on our plate or is processed into an end result, such as a leather jacket or some cosmetic product. For me, De Bruyckere’s hides are a tribute, a gesture of respect that acknowledges animal suffering. Leather is animal skin, and skin in all its vulnerability shelters humans and animals alike. Being vulnerable, skin is also easy to wound. It is through skin that we perceive the touch of the other, whether good or bad. Skin, leather, touches something raw in us. Have I tanned my own hide to the extent that I am unable to perceive animals as feeling, sensory, equal creatures who also experience their own existence?” (Tiina Penttilä in the catalogue) 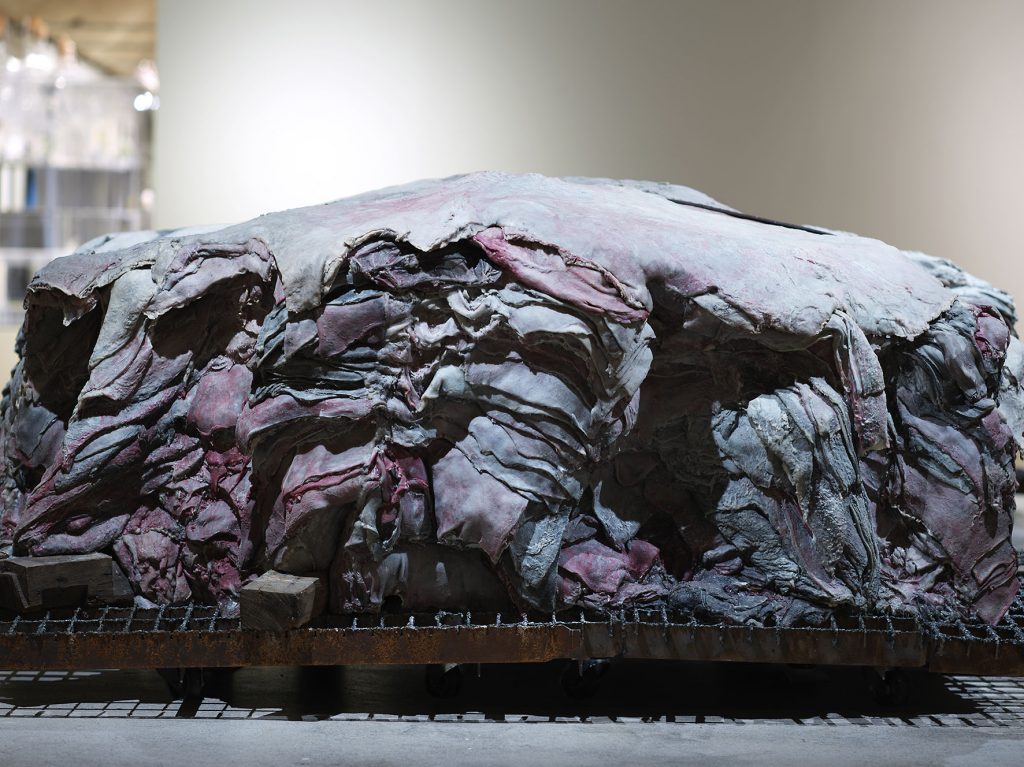 The exhibition In Search of the Present, to be repeated every three to four years, is said to address questions people face in the ever changing world. The focus is on current issues that are shaping art and society at large. Apart from the exploitation of animals, the works of the current exhibition examined topics ranging from the modern sports hype to politics in the social media and to the digital evolution, from plastic waste to the refugee questions and from virtual warfare to spiritual parallel realities.

Below is Sanna Heiskala’s ‘Something there is’ proposes that perception is never fully objective.

Sasha Huber’s reminds us of The Sea of the Lost.