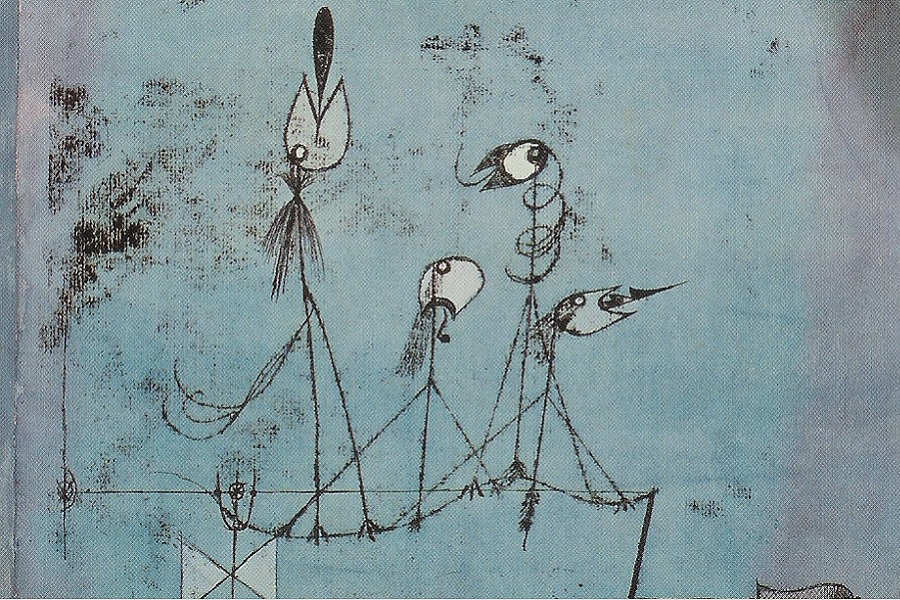 I walk the line

What do you think happens when you turn that crank? You know, if you could reach inside that colorfully cloudy place, grab a hold of that shaky machine and give it a turn or two? Do you think it would twitter? Or sing like a canary? Of course no one knows for sure. I’d like to imagine even Paul Klee couldn’t tell you because his Twittering Machine is not a machine, it’s a drawing. A transfer drawing to be more specific which is a process involving tracing a drawing which has been placed over a page coated with oil paint or ink, black oil paint in this case, itself placed over a third sheet leaving tell-tale signs of drawing and process; oily remnants, happy accidents. From the first time I saw Twittering Machine at the Museum of Modern Art I giggled. When I read the title, I chuckled. I don’t think I gave it much more thought than that, that first time. Not much more than – Playful, funny and fragile.

I’d imagine an Ornithologist would view Klee’s machine differently than the small game hunter. The art critic, the World War buff, the watchmaker and the fly fisherman will all bring different experiences to bear on the perceived story that exists between the viewer and the work of art. Which is as it should be isn’t it? After all, there’s no way to insulate a work of art from as many interpretations as pairs of eyes that fall on it. That said the more points of relevance our frame of reference brings to bear on the subject, in this case a drawing titled Twittering Machine produced in 1922 Germany by the Bauhaus professor, artist, author and musician Paul Klee, the more stable our foundation becomes to build our thoughts upon.

Over time my point of view has changed. For one, I’ve begun to fill in some historic and personal information about and around Paul Klee and the Germany of 1922 when this work was created. And let me say in very general terms, the latter isn’t a very pretty picture. Germany in the 1920s saw political unrest, assassinations, power struggles, hyperinflation, workers strikes and the imposition of war reparations through the Versailles Treaty that would contribute to the near crippling of the countries economy. Outside of purely political agendas, technology and more symbolically the machine were viewed as one ray of hope amid a fairly grim reality. The machine age was embraced by many artists including the Bauhaus School which was embodied in their slogan “Art and Technology – A New Unity”. Klee created Twittering Machine during his tenure as a professor of the Bauhaus so we could assume he shared this sunny view of the machine’s potential. However, if we read deeper into the man, I’d suggest this isn’t necessarily so.

Outside of purely political agendas, technology and more symbolically the machine were viewed as one ray of hope amid a fairly grim reality.

As unlikely as it may seem from the playfulness of his work, Paul Klee was very serious about his art and was generally seen as rather introspective and reclusive, earning him the nickname – The Bauhaus Buddha. His essays, lecture notes and writing including the Pedagogical Sketchbook exhibit a rigorous formal analysis of the work of art, its relation to nature, abstraction and to us. Klee’s lifelong passion for music and respect for nature add another important dimension to our picture. Klee’s father was a music teacher, his mother a singer and young Paul exhibited great skill on violin. Attending concerts was an important aspect of Klee’s entire life and he would earn his living playing violin until age 30. His wife, Lily Stumpf was a pianist and together they would play Bach and Mozart sonatas at home for their son Felix. Klee was constantly searching for ways to merge his art and love of music. He saw rhythm in color. He titled compositions ‘Fugue in Red’, ‘In Bach’s Style’, ‘Pastoral (Rhythms)’, ‘Nocturne for Horn’, and ‘Ancient Sound’. Of equal importance is his reverence for nature which is evident in his writings. From his Paths of Nature, 1923 “For the artist communication with nature remains the most essential condition. The artist is human; himself nature; part of nature within natural space.”

This is an interesting point of view whose relevance comes into focus more sharply when contrasted with Klee’s artistic contemporaries. The Italian Futurists reverence for technology and the machine superseded nature as well as Klee’s beloved musical classics. F.T. Marinetti, Futurisms founder went so far as to trumpet the technological triumph of man over nature. Luigi Russolo’s Futurist essay from 1913 L’Arte dei rumori (Art of Noises) presents us with his version of the soundtrack for the machine age:

“We will have fun imagining our orchestra of department store’s sliding doors, the hubbub of the crowds, the different roars of railroad stations, iron foundries, textile mills, printing houses, power plants and subways. And we must not forget the very new noises of Modern Warfare.” 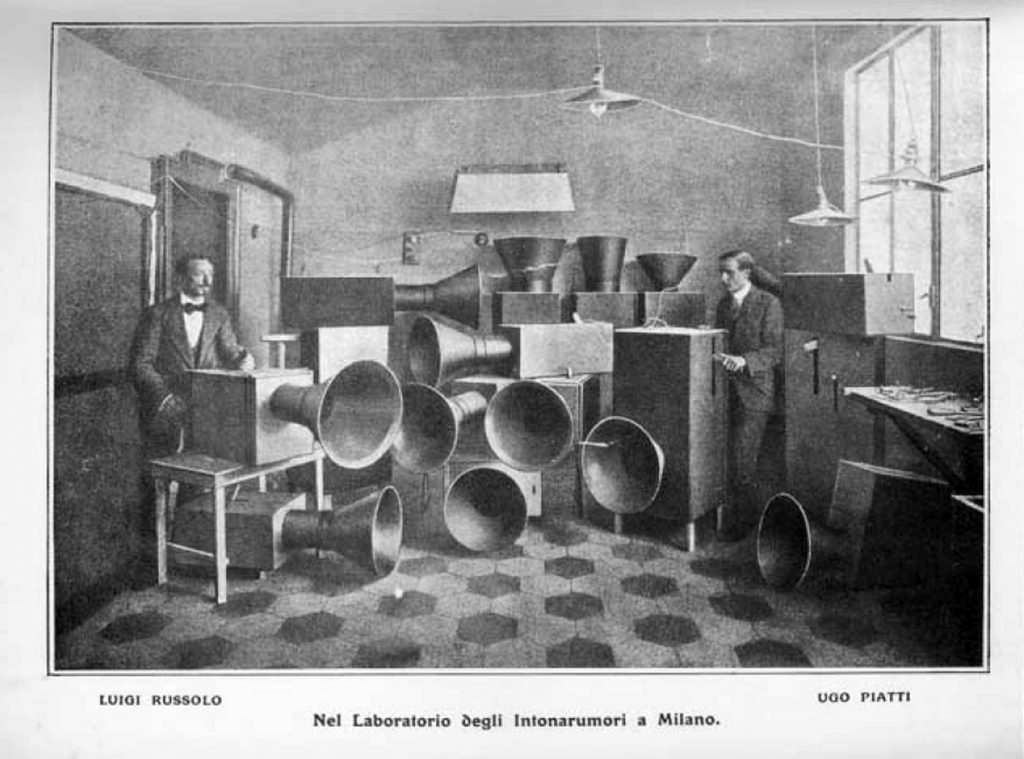 Armed with this belief, Russolo went about building his Intonarumori (noise machines) which he saw as a necessary ingredient in modern music. For Russolo the traditional orchestra, their compositions and instruments with limited tones had become obsolete. Nature was “normally silent”, classical music boring and modern man ready for “the infinite variety of noise-sounds” emanating from his cranked machines. Based on Klee’s lifelong embrace of Bach and Mozart and his less than enthusiastic reception of Schoenberg’s work, I have to believe he would have been at best nonplused by Russolo’s noisy pronouncements, at worst amused. And while Klee respects nature and man’s place within it, the Futurists are ready and willing to steamroll over it, paving the way for technology-propelled progress. If we try to fit Klee’s Twittering Machine into this context of the machine-over-all, I believe we need to add a healthy slathering of sarcasm and a smattering of skepticism to get them to mesh.

“With a few simple lines Klee has created a ghostly mechanism that imitates the sound of birds, simultaneously mocking our faith in the miracles of the machine age and our sentimental appreciation of bird song.” H.W. Janson, History of Art

The frailty of Paul Klee’s machine, the absurdity of a drawing of a mute machine, captive birds perpetually in wait for a hand to set them in motion reads within this historic context as a wry comment on the machine propagandists of the time; the Party, the Movement, the Manifesto and the machine made for twittering. The Bauhaus Buddha reflects on the state of things and comes out chirping. Slyly and silently. And we cannot overlook the importance of Klee’s title nor the role it plays in this silent tale. The twittering is in fact set off by Klee’s title, only to be stunted by the drawings silent immobility; words setting ideas in motion only to be frozen in line. An endless juxtaposition of action and inaction, nature and machine united in impotence.

“The contrast between man’s ideological capacity to move at random through material and metaphysical spaces and his physical limitations, is the origin of all human tragedy. It is this contrast between power and prostration that implies the duality of human existence. Half winged half imprisoned, this is man!” Klee

The frailty of Paul Klee’s machine, the absurdity of a drawing of a mute machine, captive birds perpetually in wait for a hand to set them in motion reads within this historic context as a wry comment on the machine propagandists of the time.

Paul Klee’s Twittering Machine never rests. You may say that’s because it never gets started, but then you’d be missing out on all the fun. Are his birds chicks waiting for their mother’s nourishment? Or are they as Janson suggests fisherman’s lures waiting to entrap real birds? Perhaps they’re Futurist songbirds prattling on about progress? Nature and technology- a new unity? I’ve read interpretations that examine the birds individually, endowing each with a different disposition and intent. Maybe Klee is tipping a bit more of his intention in his writings and we should see these half-winged, half imprisoned creatures as our tragic portrait. Perhaps most relevant of all is simply the realization that Klee’s twittering machine speaks to something within us allowing our experiences and point of view to share in the creation of meaning. Here we allow the work of art to go about its work.

Since that first time I saw Twittering Machine things have changed. And it turns out that each time I see it, it plays a different tune. Even when I think about Twittering Machine my mind turns that crank to discover some new twist. Some new turn, some new story. As my life has changed, so has my reading of this deceptively simple drawing. Maybe that’s why they’re called works of art; their working lies in our changing perspective of something that remains unchanged and how meaning hovers between the work of art and our perception of it. Maybe Paul Klee simply wants to set our minds in motion with his machine. It certainly inspired Gunther Schuller, Peter Maxwell Davies, David Diamond and Giselher Klebe to compose works based on the meaning they each found nested within Twittering Machine. In contrast, Russolo’s noise machines are long silent, Futurism’s technological triumph of man over nature has been trumped by nature’s warming complaint. Yet Paul Klee’s devotion to small things seems to speak a timeless language, albeit with a pointed tongue and beak.

“A drawing is simply a line going for a walk.” Klee

Twittering Machine has not changed over the decades since I first saw it. I have. And with the luxury of time, reflection and research, Twittering Machine has grown to be more than a chuckle, even more than a giggle. I’ve accepted Paul Klee’s invitation “Art does not reproduce the visible but makes visible” and allowed my mind to wander from what I thought I knew to things I’m only beginning to understand. I’ve allowed my present to inform and in return be informed by this moment from the past. And for that, I’m thankful for Paul Klee and his walking line. And because of that perpetual unknowing I can laugh heartily, out loud, while turning that internal crank like an organ grinder dreaming of opera.