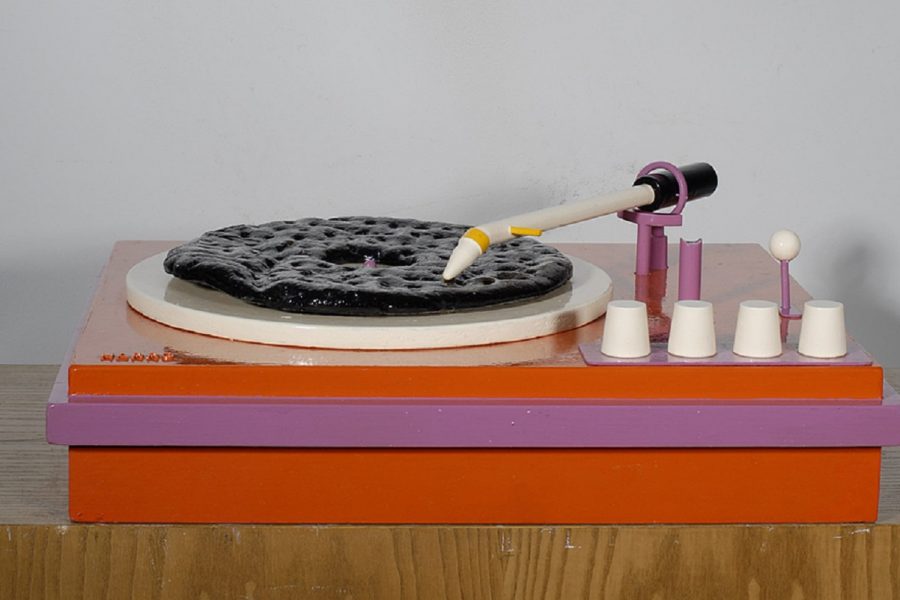 Harro Koskinen (born 1945) is known for his pigs. Socially critical, pop-art induced pink and yellow pigs that spend the life of young men … well, the vibrant life of the swine: drive motor boats, rage about their broken cars, argue and love, at the same time making parody of religions, state, police, and generally “all the bad traits of humankind”.

More than one of the pig works were reported to police. One (Sikamessias, 1969) was accused of blasphemy. The verdict came, but the artist was pardoned.

The pig theme, born in the early years of the his career, determined and characterized the life and production of Harro Koskinen for decades, despite the fact that it was just one of the many in Harro’s long artistic path (the exhibition at the Turku Art Museum 11 May – 9 September 2007 well highlighted the broad arch of his production). 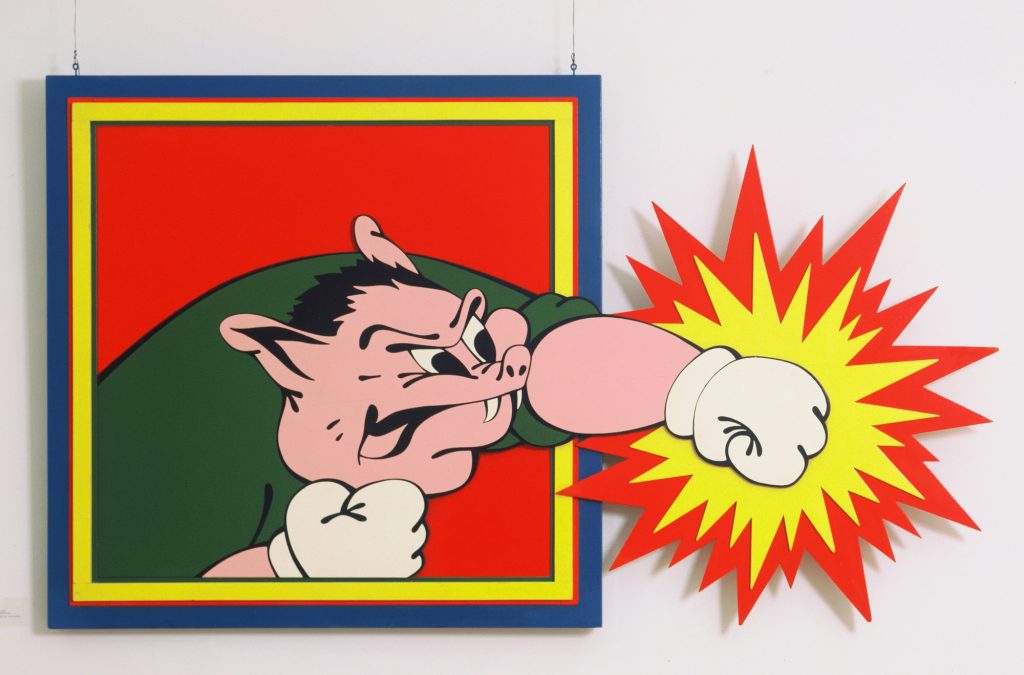 It accommodates informalism (art that was targeted against constructivist art), objectivism, ecological reflection with miniature sculptures made of natural materials, not forgetting delicate landscape painting.

However, this time we are not interested in Harro’s whole life’s work. It’s quite well covered in a richly illustrated monograph published by Turku Art Museum (by Mia Tykkyläinen). The book also reveals Harro’s connection to the 1960s underground movement and the Talvisota orchestra. 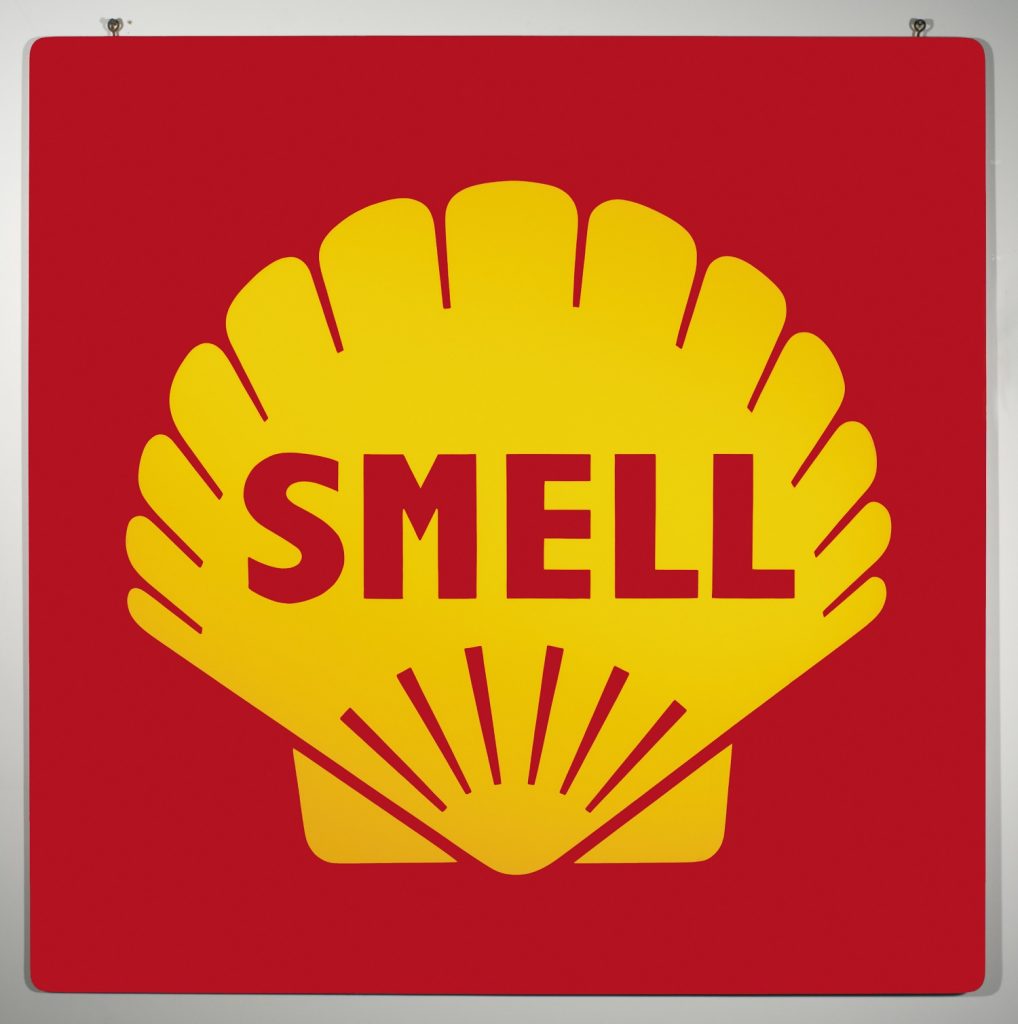 Instead we take interest in two of Koskinen’s early productions related to music. The other is Jazz – Everything Between It and the other Bread Song.

At the time of these works, Harro was already gradually withdrawing from the abstract expression. “The idea behind a work started to become at least as important as the aesthetic form of the work,” has Harro himself said. 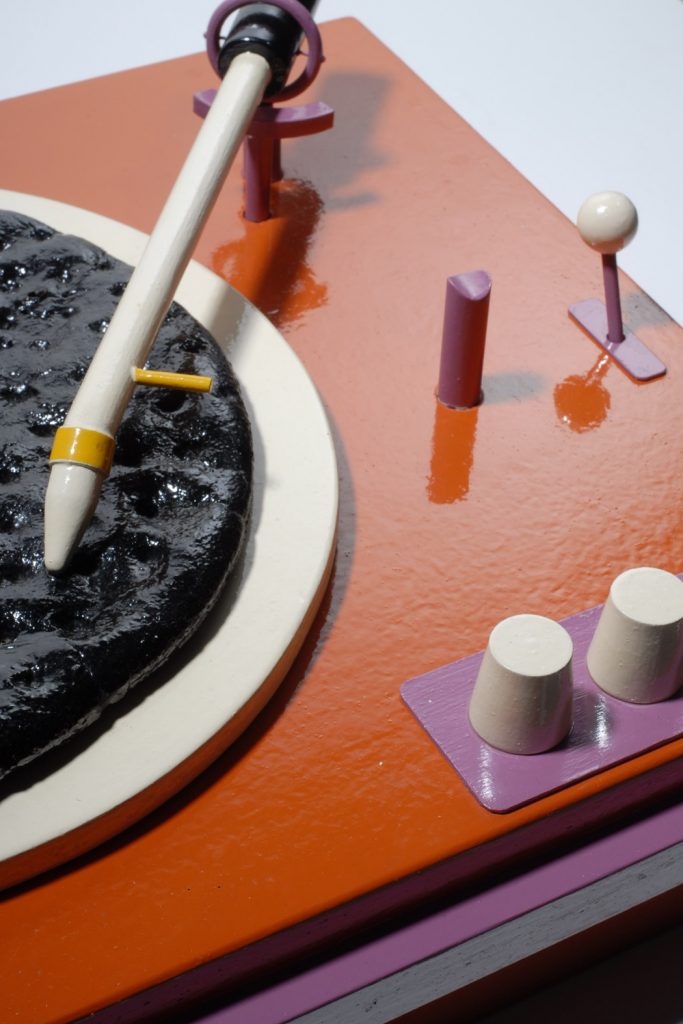 Bread song was born in 1968, a big year for the artist: “In the year of ’68, three-dimensionality became increasingly important and I began to use my ready-made, everyday objects in my works. I also openly used kitsch, long before people knew anything about Jeff Koons.”

Both works show Harro’s passion for POP art, especially as it was manifested in Europe. For example, the work Jazz – Everything in between (1966/67) is known to have been inspired by Roschenberg’s wild object art.
Although Harro fancied POP art’s “fresh aesthetics,” he could not stand its often with uncritical content. The critical attitude is something that has remined in Harro’s works from a decade to the next.

I asked Harro about the Bread song turntable. It has nothing to do with singing or music but with bread. More specifically, about the fact that not everybody has it enough, not then and not 40 years after: millions still suffer from hunger all over the world.

“I wanted include in the work some great stereos which I couldn’t afford myself at the time. The black color of the bread created the appropriate contrast. ” 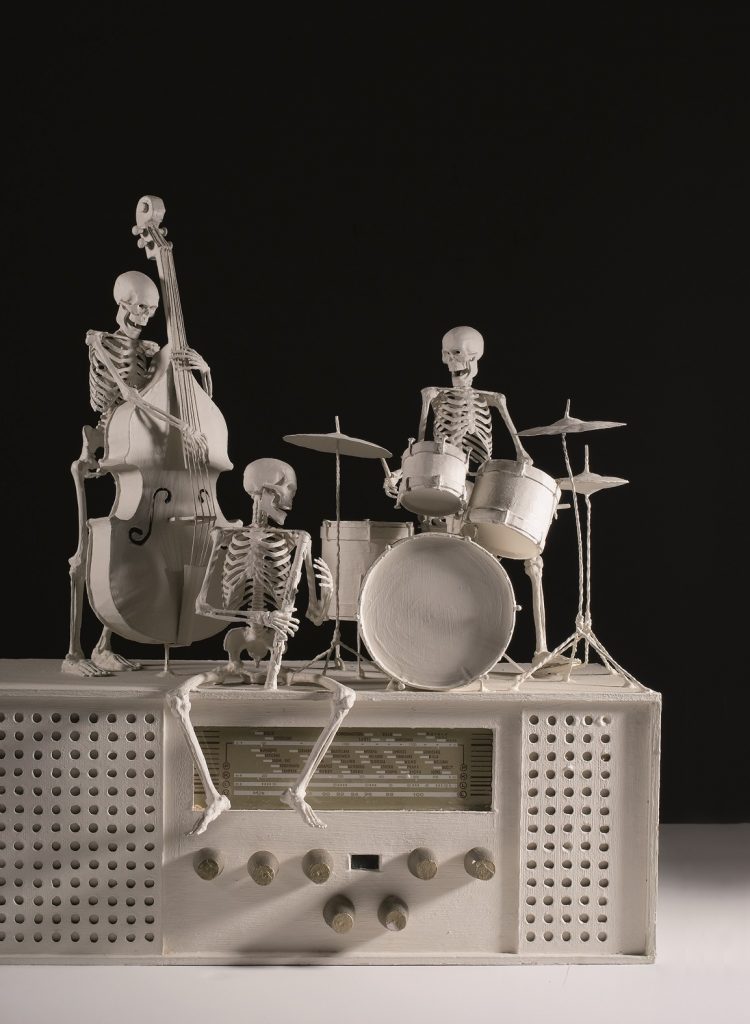 With the jazz band Harro is more merciful. He admits he liked jazz when younger and that he made the work in part in order to honor the joy of playing and swing of music. But! When I asked about the skeletons, he remembers the idea came from the awareness of the fact the economic situations of musicians wasn’t particularly good as it still isn’t.

When Harro was aksed what the present exhibition means to him, he responded: “The end of the artist career”. In the same connection he told he enjoyed listening to Bach and reading the fiction. Speaking of his future plans, Harro says that he’s going to sew sails as well as repair and design boats.

“Also, laziness has also been in my mind”.

Harro Koskinen (born 1945) is best known for his socially critical works which draw on Pop Art. His pink and yellow pigs are especially well known. The almost a four-metre tall Pig Messiah from 1969 resulted in a blasphemy charge, and a lot of publicity. Eventually, he received a sentence but was redeemed.

Over the decades the pig has become a loved figure by new audiences. Harro Koskinen’s art continues, however, to be defined by these early works of his. The recent comprehensive exhibition of Turku Art Museum showed how Harro’s art has always varied and changed in close rhythm with the times, from Pop Art to assemblages and to ecological ponderings of the 1990s. His works are typically multidimensional and employ a variety of different techniques. The socially critical message of his works has remained the same over the past forty years.