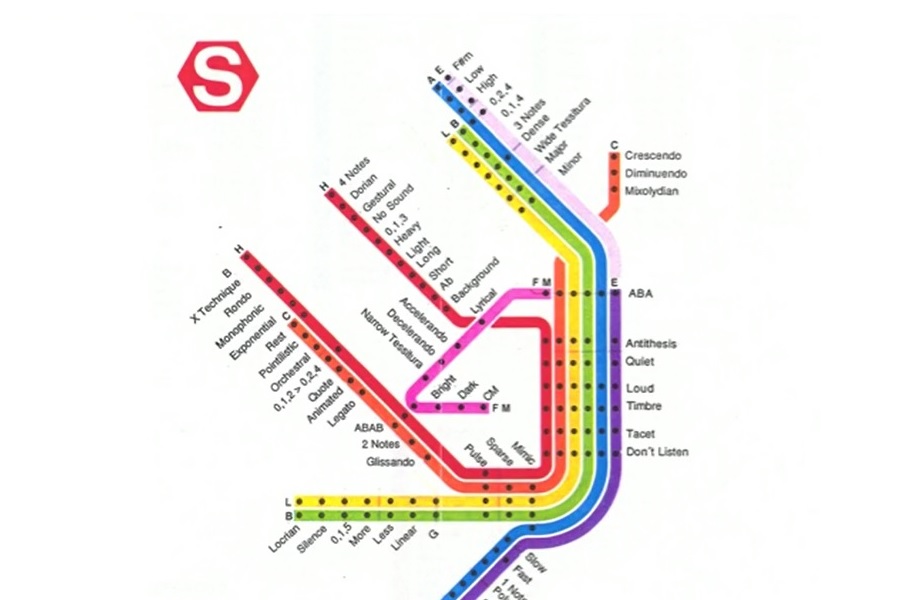 The talk by Prof. Mark Applebaum, featured in the video below, was presented to a local audience at TEDxStanford. In the independent event he’s not only talking but makes music too, music that is said to “break the rules”. The speech and the demos are to be taken as a piece of artwork of its own.

During the performance Prof. Applebaum takes on eight different roles as a composer/music maker, and the characters carry on the discussion. He’s the interpreter (plays Beethoven on piano), the improviser (improvises on the Beethoven’s theme), the instrument maker/inventor (demo of a musical instrument he’s crafted from junk and found objects), … 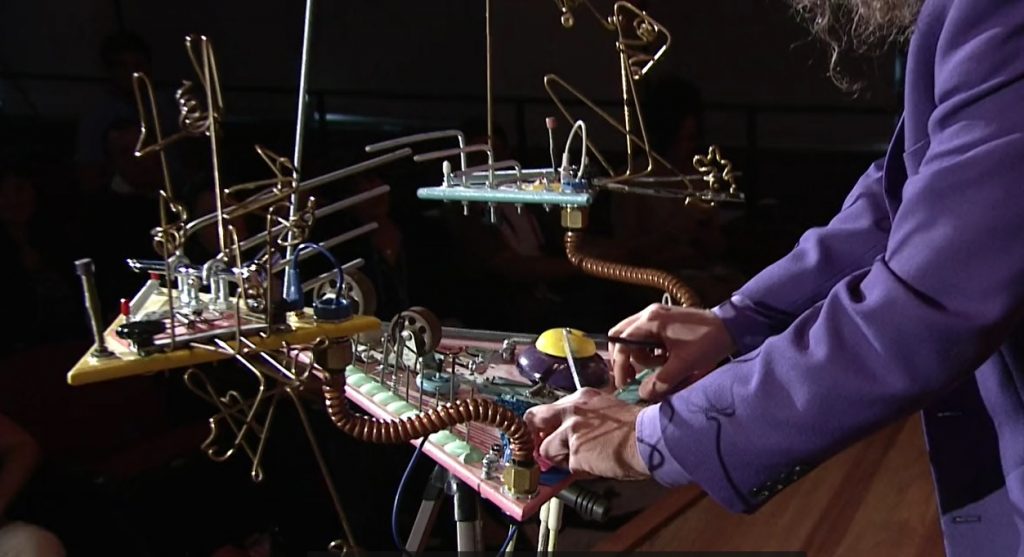 … that of the composer (music he’s written), the visual artist (musical notations for the art museum), … 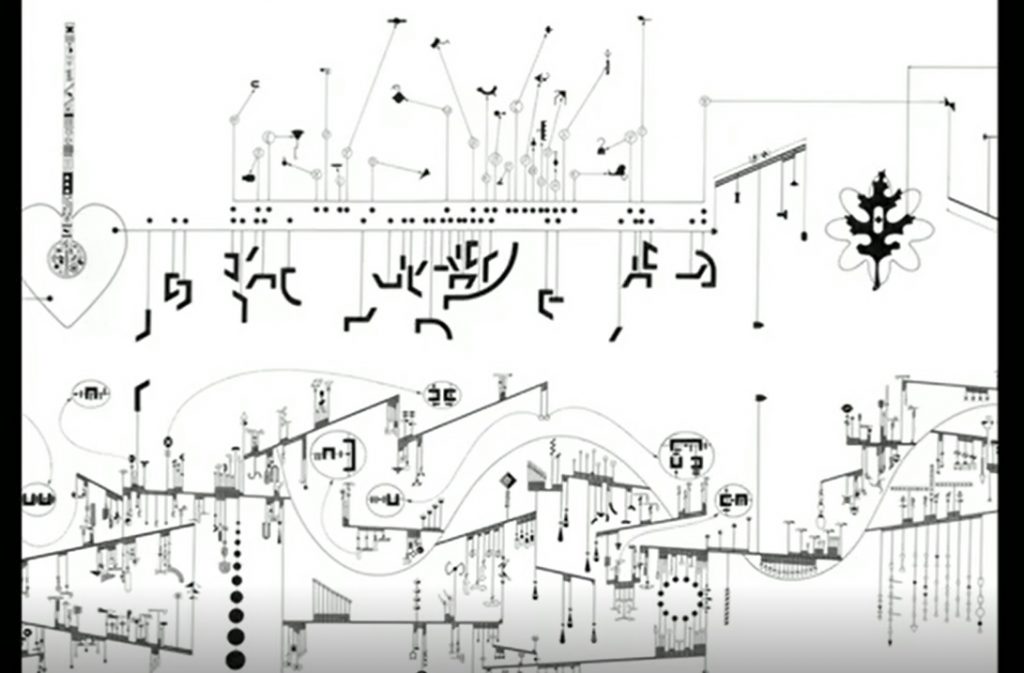 … the scavenger (making open use of the Copenhagen underground map for musical purposes), …

… the designer (wrist watches with musical dials), the performing artist, the dramaturgist (a concerto for a florist and the orchestra), and the coreographer.

Between the roles, he insistently poses the question: Is it music he’s making, or is it what? Is it just something that he finds interesting to work on? Certainly it seems to interest him as he openly admits being bored with the traditional way of understanding, making and consuming music, and is therefore eager to explore new areas.

To go forward, as he says.

I’m sure many people find some of his “new faces” surprising and funny. Maybe he even manages to raise questions that numerous musical minds think while composing albeit are not saying it aloud in anticipating what the reaction of the audience will be, be it the critics, or their own mother.

The video supplier (www.ted.com) hopes that “the quirky talk might just inspire you to shake up the “rules” of your own creative work”. That – encouraging people to enlarge their creativity to unexplored areas – is the best and most durable part of Prof. Applebaum’s presentation.  As such, it’s a valuable reminder that in being creative, inhibition and following the learned rules are not always the best friends to lean on. 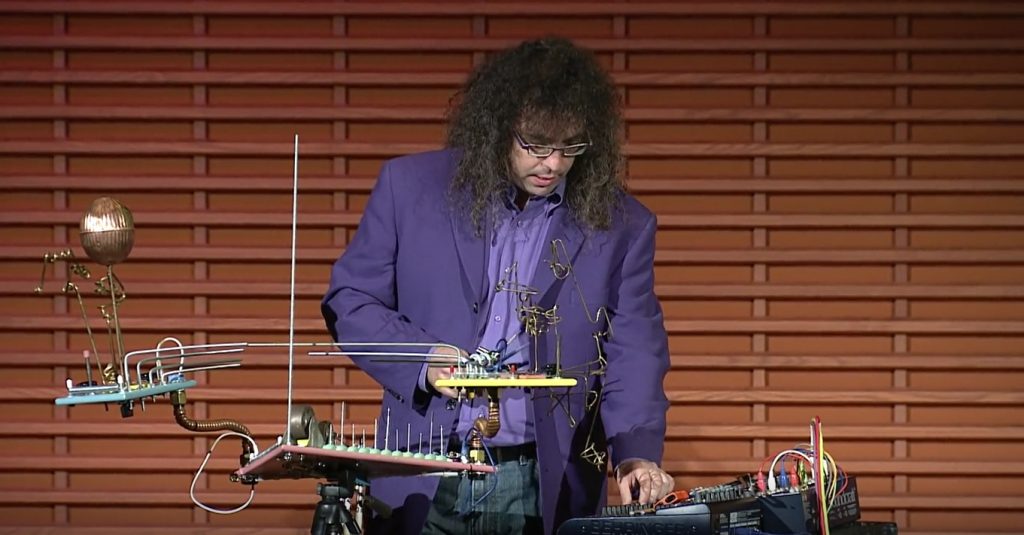 However, the way in which Prof. Applebaum is proving his point, I find kind of shallow. The “braking the rules” takes place just on the level of appearances. He’s making short-cuts.  I do understand that it’s only a 12 minute stage performance. But why does it have to be stand-up comedy?

If a generalization is allowed, it’s tempting to think that it’s not by accident that the video originates from the US. There’s something very US to it, both in good (experimentalism) and bad (certain superficiality). There’s no denying that Prof. Apllebaum is a multifaceted and multidisciplinary person, especially compared to a handful of other Profs. in musicology  that I know.

He’s a generalist, and that’s fine. He freely admits being a dilettante in some of the topics he’s addressing, but is not inhibited by it. A great attitude! But he’s also, to my taste at least, too restless, too impatient, too hurried. Plus, some of his tricks are a bit cheap. Take the Concerto for florist and orchestra, for example: unless it’s a joke, the idea is so worn out. Seen so many performances of the same idea (a concert for X and orchestra, where X = just anything) .

He’s a generalist, and that’s fine. He freely admits being a dilettante in some of the topics he’s addressing, but is not inhibited by it. A great attitude.

Self-made instruments? Again, nothing new. The history of self-made sounding objects is a long one. Composers Lou Harrison and especially Harry Partch are known for their experiments with unconventional and often self-made special mechanical instruments. In the 1950s, brothers Francois and Bernard Baschet made their famous sounding sculptors. From the 1960s onwards, the composer Hugh Davies Davies invented musical instruments that he constructed from household items. And so on. Bart Hopkin’s Experimental Musical Instruments, featuring special instruments and their drawings, was a legendary magazine at the time. With advanced electronics building imaginative sounding instruments from garbage and spare parts has become so much easier, and many have seized the opportunity.

And what about Prof. Applebaum’s core question: Is it music? The ontological question (What is music?) was fiercely discussed by musicologists already in the mid of the 19th century! Hundreds of university lectures (philosophy, musicology, aesthetic theory) are given on the subject every year all around the globe.

According to my understanding, Prof. Applebaum is raising one true and lasting question.  Not surprisingly, it’s in the very beginning of his talk when he’s improvising on the Beethoven’s theme, and does it with style and skill. The rest is just what it is: entertainment. But the question of the role of improvisation in Western classic/art music, a far too large one to be dealt with here, is a genuine question that goes down to the medieval roots of Western classic music. At the same time, eg. along with the increasing influence of electronics, it is also a timely and important question. So Prof. Applebaum must be thanked for taking up the issue in his performance, even though it’s less sensational than the rest of his examples.