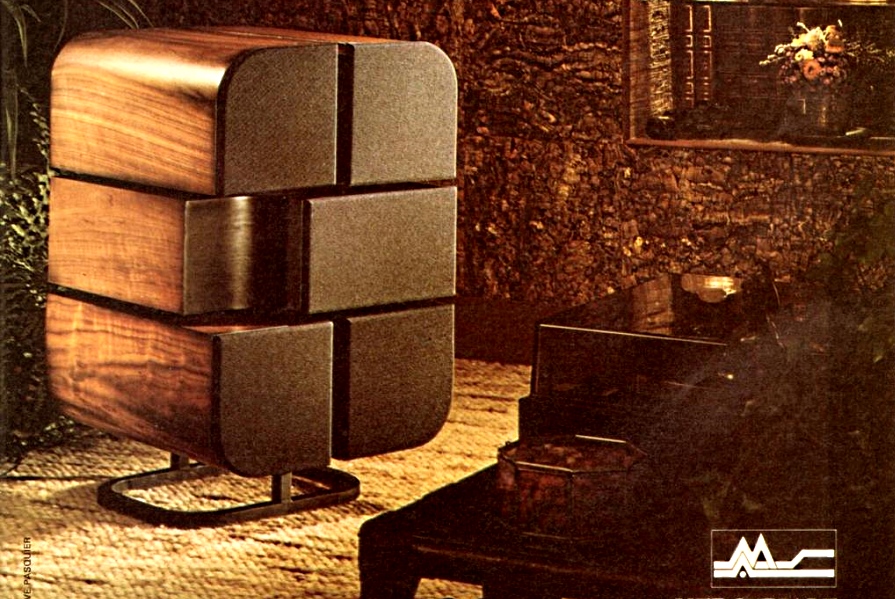 Have you ever seen a pair of vintage loudspeakers at eBay and immediately felt that it must be you who will rescue them and give them a new life? I bought, for a couple of hundred euros, a pair of peculiar looking French speakers through the Internet. They were big and sort of ugly, but not without French elegance and beauty. Like an old guitar: too early to be tossed. No one seemed to recognize them.

When they arrived at my door steps, I knew we had something special at hand. No info on the Internet. Many specialists tried to identify them but in the end of the day only the head designer Jorma Salmi from Gradient Loudspeakers vaguely recalled them: in fact he had heard the speakers in the 1970’s. 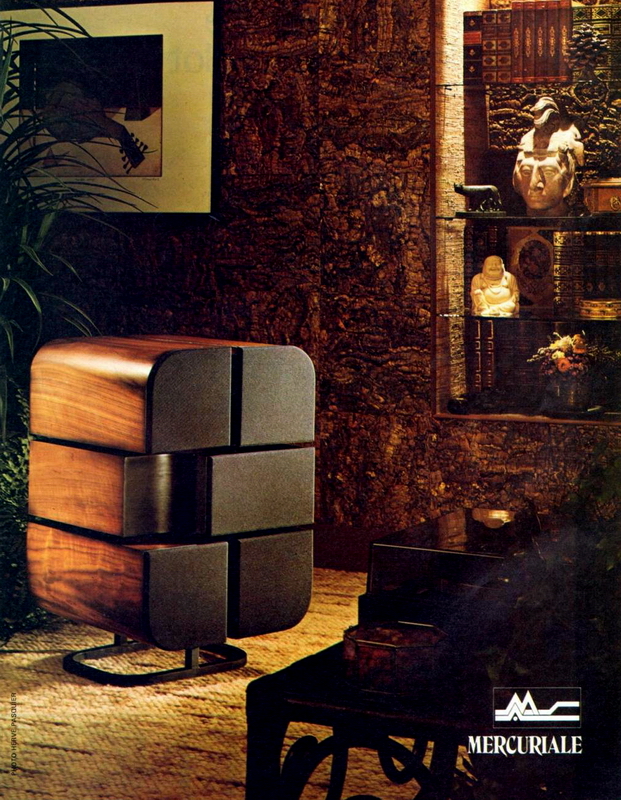 They were designed for the same audio market as B&O but obviously failed. From the Internet we found a telling ad that gave a hint as to whom the speakers were possibly intended and marketed: those who collect African art and have a three million dollar house.

The Chief Editor found the set from his French catalogues as well. Mercuriale FC413 is the best model name to identify them. The company Mercuriale seems to be still alive but obviously not very actively: last time their website was updated was in 2005. No help from their contact info either.

Originally, the speaker utilized relatively small drivers (carbon fiber cones, ultra-linear suspension and a 12000G magnet) for better transient response. Each driver is mounted in a separate tube-like cabinet (adjustable Hemholtz resonator) in order not to excite cabinet resonances. The tweeter is a textile (latex impregnated) dome with a neoprene suspension. It’s a 84 dB sensitive 4 ohm design. The weight is 25 kg per unit.

The frequency response and distortion figures are as follows (from the original brochure):

Martti Rantanen, an audio hobbyist working for the Finnish National Library, agreed to refurbish the speakers. The mission was to fix them technically but from outside leave them as they were with a slight touch of vintage as in old furniture. No glitch, no gimmicks. Neither a great budget, nor a fixed timetable. The job was done on top of daily duties.

A closer look showed that the whole construction was twisted. Perhaps the set had been dropped. So the first thing to do was to detach the drivers and straighten the frame. All the electronics were checked and resoldered as they were defect due to the accident. Martti even drew up a schematic of the electronic crossover circuit.

The speaker elements had been changed at least twice before; there were no signs of the originals. The current drivers probably originated from a car, and sounded such too. They were all rejected. 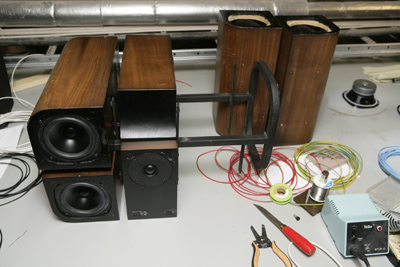 Speaker elements fir for the job were found from Suomen Hifitalo: Seas MP14RCY as a woofer, and Seas 27TDFC as a tweeter, all for the sum of 500 euros. The elements did not fit just like that, and the massive wood cabinet needed some elaborate milling. This was the slowest and hardest part of the project. The cutting had to be point perfect to meet the exact shape of the drivers. The total of eight woofers and two tweeters finally – after many hours – did fit like gloves. 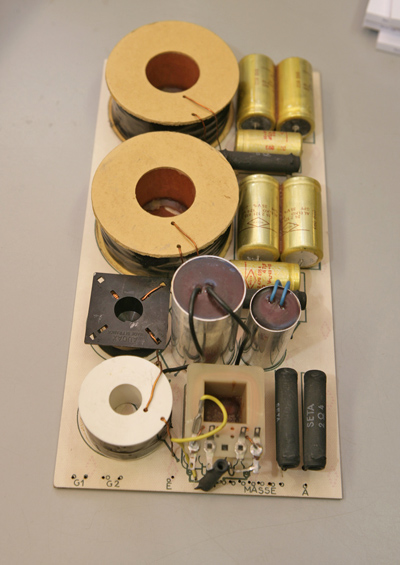 The crossover soldered with silver tin … 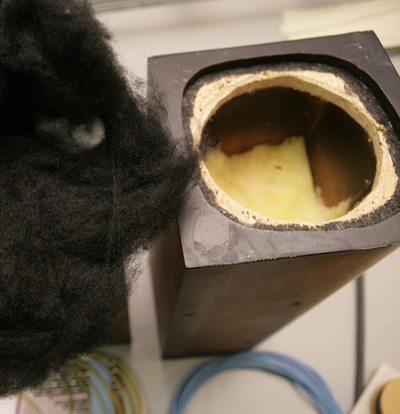 We then replaced the damping materials with new one supplied by Gradient.

Finally the surface of the cabinet was cleaned, rubbed three times with bee wax, and finished with a Lacquer polisher that gave the surface a nice touch. The grills were totally repaired. The overall appearance of completely refurbished speakers was impressive. The whole effort took three days. 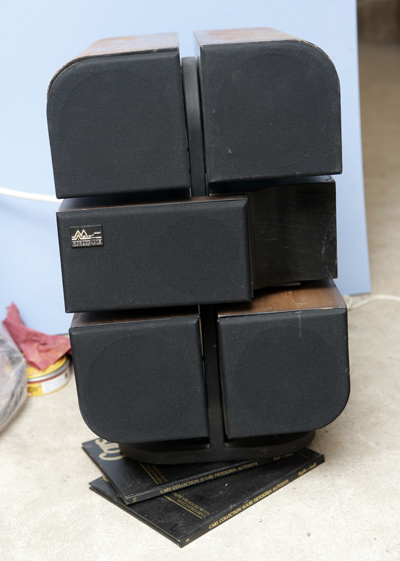 The speaker is finished. The frame straightened and ready to kick. 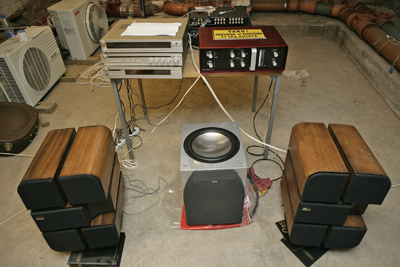 The sonic result was, mildly put, rewarding. The straightened frames made the set sound impressive, musically communicating with the original authority planned by the designer. In command of a vintage Sharp Optonica and the preamp, the Mercuriale FC413 sounded amazingly natural. The bass descended near the 50-70 Hz range. The lowest bass was nicely simulated, and there was no real need for a subwoofer (the speakers were tried with an Elac sub though).

The midrange left no complaints. So seducing. With a female jazz singer, Pirjo Hirvonen from her recent CD, we were pleased to notice that the sound did not have that modern small speaker boxiness at all. And there was enough explosiveness for the modern music of Angelique Kidjo, for example. The idea was to use these speakers as the main speakers in a stereo system, and in that capacity they served impeccably.

But Mercuriale FC412 was also used as a center speaker in the so-called Ortoperspecta ‘3-channel’ configuration with an old Voima tube amplifier, and it managed pretty well in this task too. There was no distortion or anything. but the need for more bass was obvious. The soundstage was great; the listener was carried ‘there’, concretely and realistically. 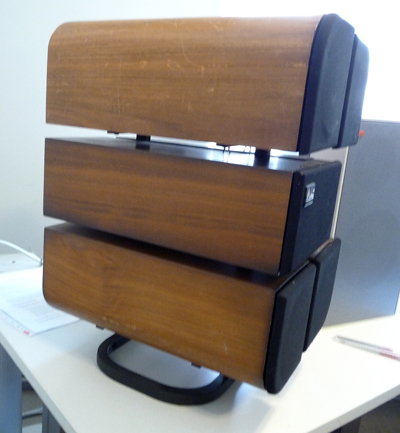 Since the speaker turned out to be so satisfying sounding, why did it never have greater success? We couldn’t figure out an answer. Small drivers? No, the small drivers did excellent job in this speaker  providing a big and very detailed sound.

Does it make sense to rescue such vintage speakers? If the cabinet is something else than MDF or plywood, Yes. If the aim is to use and enjoy them, Yes. Just to store them in the garage, maybe not.

The total cost of refurbishing was circa 1 000 euros (purchase, transport, parts, woodwork and compilation). What else, equally exciting can you get with the sort of money?

All images by Kari Timonen.