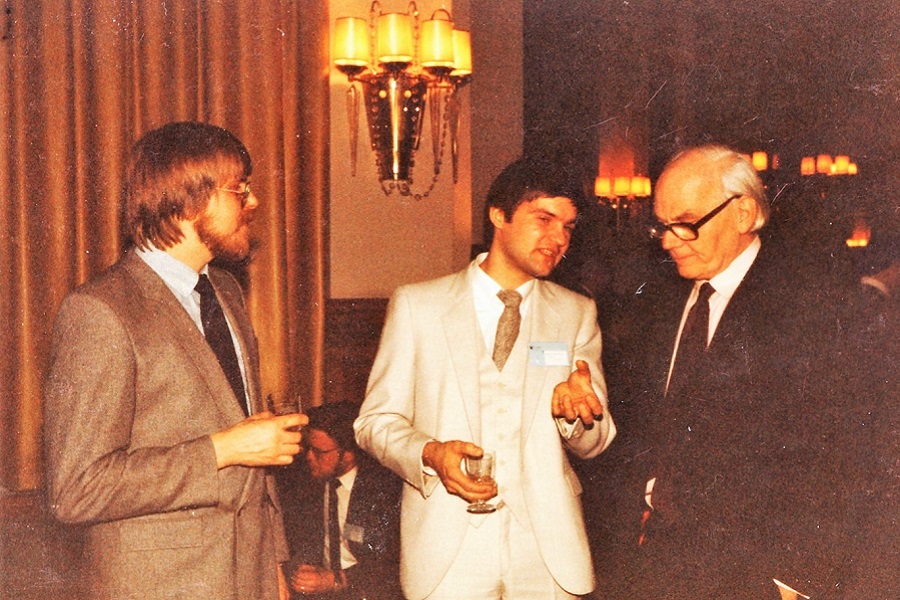 A brief history of Gradient Labs

Long time back, the head designer and founder of Gradient, Jorma Salmi, worked for a major Finnish consumer good company Lohja Corporation Electronics. He was assigned the responsibility to manage the company’s acoustic laboratory. It was in that capacity that Salmi designed his first loudspeakers with some advanced features. Needless to say, “advanced” here does not mean what it came to mean in the connection of more innovative  Gradient loudspeakers. Salmi’s early speaker designs for the Lohja Corp. were either acoustic suspension or ported models. 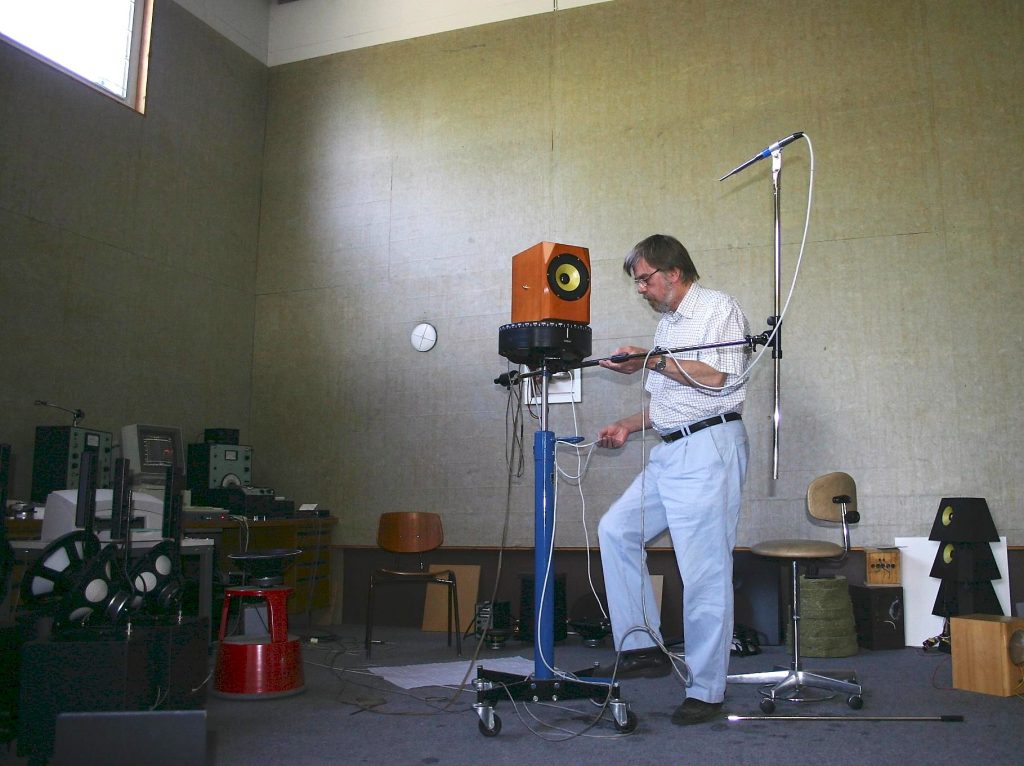 Some years later Salmi hired Anders Wecktström to join him in the lab, and together the men started to carry out various investigations especially as to how loudspeakers interact  with the listening room. Results of the research were summoned in a paper “Listening room influence on loudspeaker sound quality and ways of minimizing it” given at the 71st AES Convention in Montreux in 1982.

In the paper Salmi and Weckström proved that almost any loudspeaker of reasonable quality sounds surprisingly good in an anechoic room, and that major sonic differences appear only when the speakers are dragged into “normal” listening rooms. 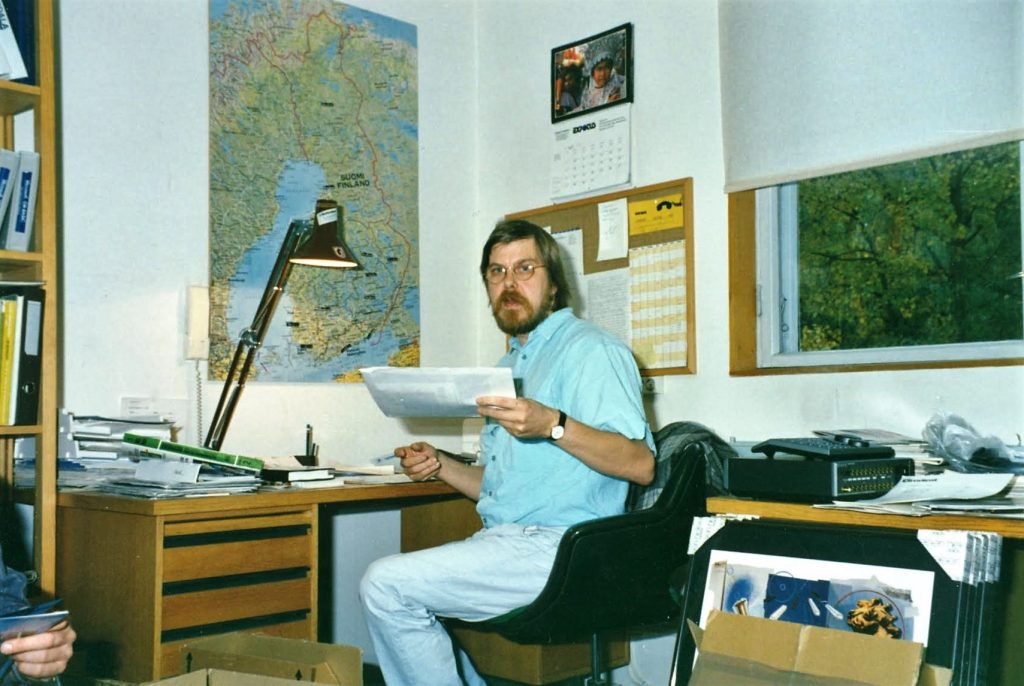 Their conclusion was that the progress in loudspeaker development since the 1950s had not resulted in a remarkable audible improvement, the reason being that the influence of the listening room on the sound had been largely neglected. The paper gave some positive examples of loudspeaker designs in which the room’s effect is minimized in one or another way.

Having studied the subject matter for a period of years Salmi felt confident enough to establish his own loudspeaker company Gradient, together with two associates Jouko Alanko and Mikko Paloranta. The year was 1984. The business idea was simply to design and manufacture loudspeakers for ordinary listening rooms, ie. for rooms where acoustic problems typically tend to arise. All the Gradient models, from the smallest to the largest,  from the oldest ones to the latest, implement this core idea. 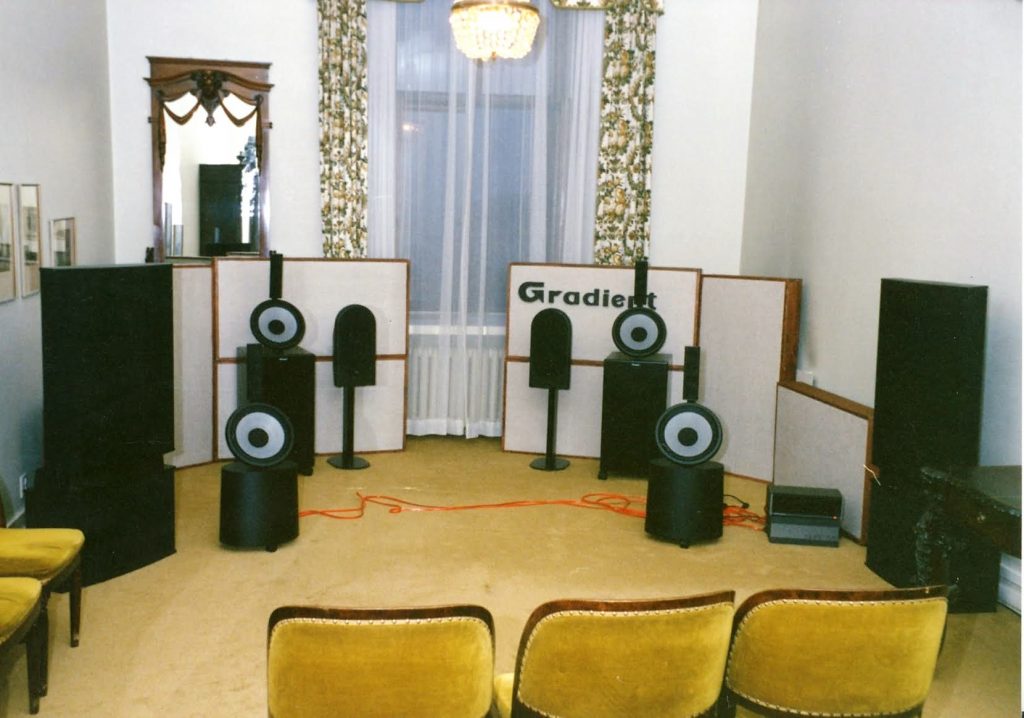 The very first Gradient loudspeaker was Gradient 1.0. It was an odd looking loudspeaker with a downward firing 8″ woofer, a fully exposed 12″ dipole midrange driver (no cabinet) firing upwards at a 30 degree angle, and four 1″ cone tweeters mounted in a pillar. Despite its unconventional design the speaker gave a flat frequency response and effectively minimized listening room’s interference.

Before the Gradient 1.0 was sent to production, the prototype participated in a group test by the Finnish HIFI-magazine. Other speakers in the test, titled “One David and three Goliaths”, were AR 9LS, B&W 801, and Quad ESL 63. The Gradient 1.0 did very well against the famous Goliaths, but more importantly, a person involved in the test knew that the Sibelius Academy of Music was looking for quality loudspeakers for their new facilities. It wasn’t long before the Sibelius Academy ordered a good number of Gradient 1.0 and 1.1 models to their classrooms, and the bigger 2.0 and 2.1 models to fill the larger halls. The order kept the young entrepreneurs busy over the first years of operation. 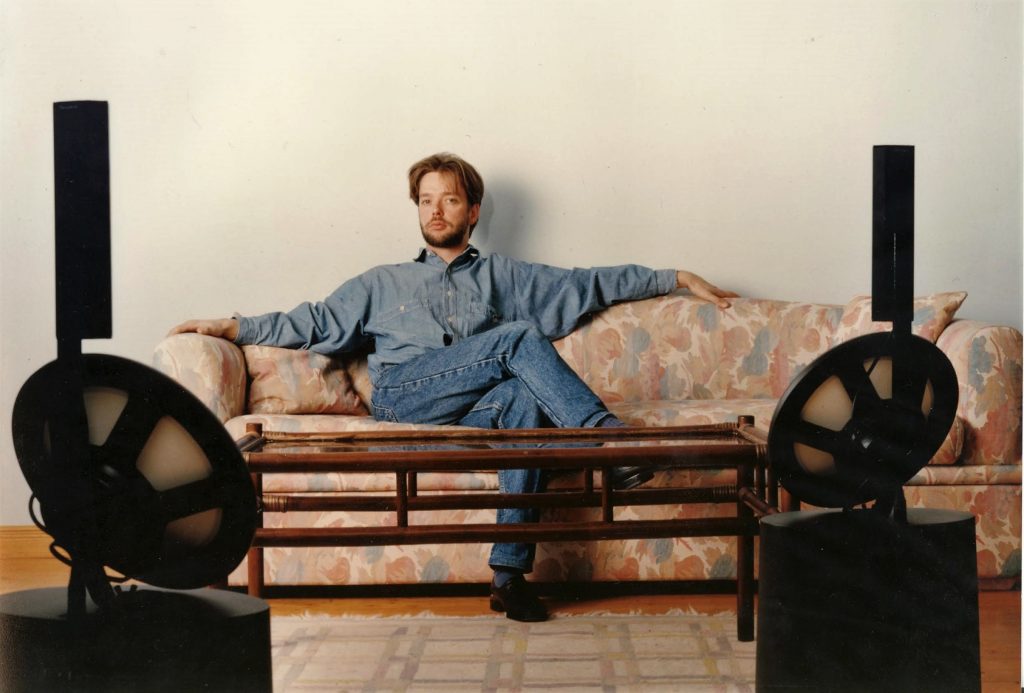 Soon after the leading Finnish conductor Jukka-Pekka Saraste contacted Gradient in order to buy the Gradient 1-series loudspeaker for his own music listening purposes. The composer Paavo Heininen chose the Gradient 2.0.

Very early on Gradient realized the importance of a proper industrial design for the success. Luckily Jorma Salmi knew an industrial designer, Jukka Vaajakallio, from the past when they both worked for the Lohja Corporation. Vaajakallio accepted the task of redesigning Gradient loudspeakers, which must have been rather challenging because Salmi, who had the main responsibility for the acoustic design, always put acoustics before the outer appearance. Vaajakallio’s first design for Gradient was Avanti loudspeaker. The speaker was honored with “Good design from Finland” award by Design Forum Finland. 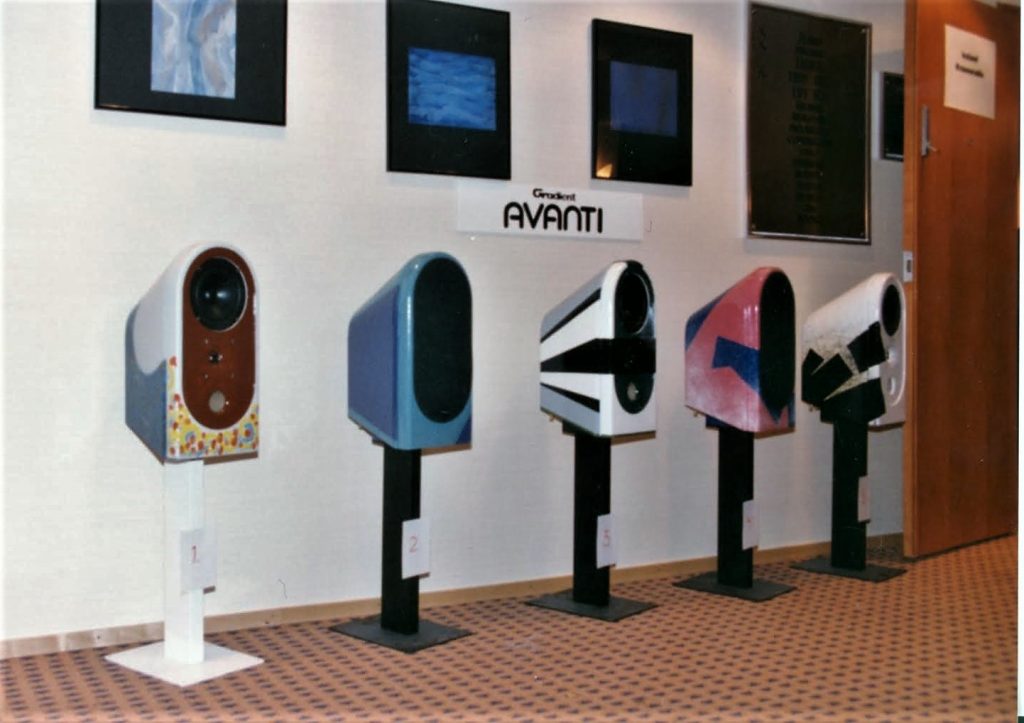 In the above image, a row of painted Avantis by Helsinki Upper Secondary School of Visual Arts in a “playful” competition organized at the Helsinki HiFi Show in 1991 where visitors could vote their favourite Avanti speaker.

Jukka Vaajakallio was also involved in reshaping the 1- series speakers in 1989. The result was the unique looking Gradient 1.3, where the cubic bass enclosure of the Gradient 1.2 was replaced by an oval shaped cylinder made of molded polyurethane. The enclosure was very stiff due to its shape and also much easier and safer to transport than the weaker cubic cabinet with sharp corners. The Gradient 1.3 on display in the collections of museums of industrial art in Helsinki and Tokyo and other cities, and it has been considered as a good sample of the Finnish industrial design.

The Gradient 1.3 was also Gradient’s first export model, and as such received great reviews globally in magazines such as The Absolute Sound. It was featured on the cover of the Stereo Review’s Buyers’ Guide in 1992.

As a young speaker designer Jorma Salmi had met Quad’s founder Peter Walker and his son Ross at the AES (Audio Engineering Society) conventions. Quad was searching for a new distributor for their products in Finland with the consequence that in 1989 Gradient started as the importer for Quad loudspeakers and amps. Jorma Salmi had already sketched some ideas for a dipole subwoofer matching the Quad ESL speakers, and via the co-operation the project became true.

The first subwoofer model was Gradient SW-63, which also served as a stand for the famous ESL-63. Gradient SW-57, a dipole sub for the Quad ESL57, followed in 1992. Both products were approved by Peter Walker/Quad, and were immediately sold around the world. The co-operation with Quad also enabled global export of Gradient products. That was more than welcomed, since in the early 90s a deep economical depression hit Finland. It would not be incorrect to say that at only two Finnish loudspeaker manufacturers of the many survived: Genelec and Gradient. 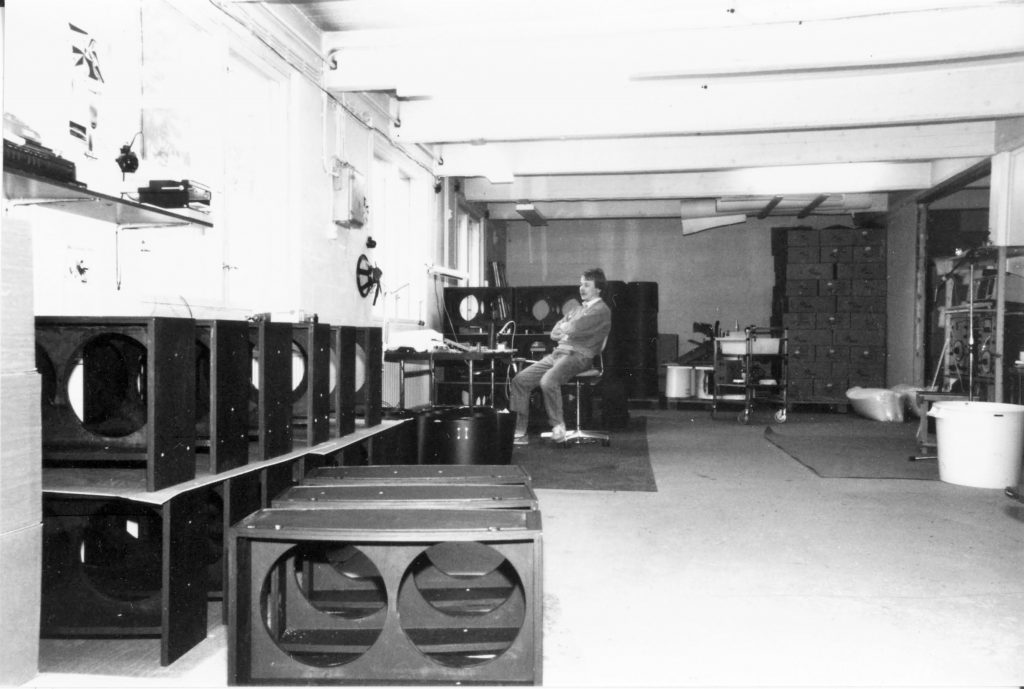 The rest of the Gradient story is better known. After the 1.3 came the Revolution in 1993, based on further study on room-loudspeaker interaction. The company launched the concept of an “ideal loudspeaker” combining a rotatable dipole bass section with a cardioid mid-range and treble (a coaxial driver). An active version of the Revolution was launched in 1999.

In 1994 it was time for the “small” Revolution: Gradient Evidence. It featured a similar acoustic resistance enclosure and radiation pattern of cardioid. Thanks to their design both the Revolution and the Evidence can be placed even against the wall without sacrificing the quality of the sound.

Gradient Intro was launched in 1996. It was a “point-source” speaker with a coaxial driver, and the reflex tunnel featuring a novel Helmholtz resonator as a notch filter (cancels the half wave resonance of the reflex port). To answer the increasing demand for surround speakers in multichannel systems, Gradient launched, in 1996, a compact 2-way speaker Gradient Prelude. Again, the coaxial driver technology was used and a suitable driver was developed together with SEAS (of Norway). 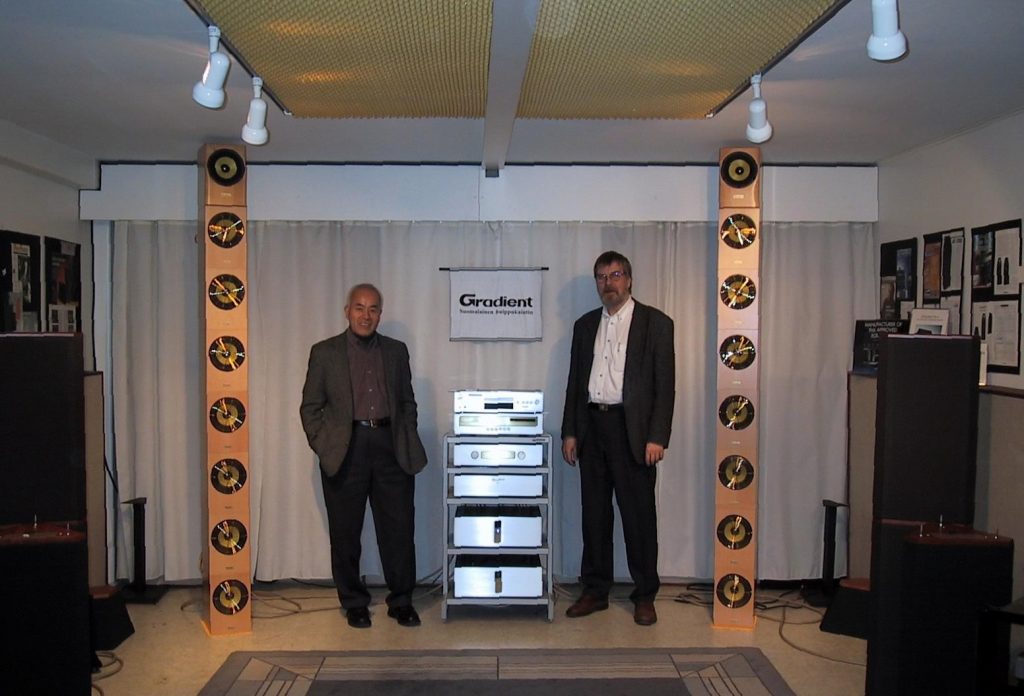 A big fan of Gradient speakers, Mr. Kiuchi from Combak Corp (above), met Jorma Salmi at some Hi-Fi exhibition, and once asked Salmi the possibility to develop a mini monitor exclusively for Combak based on the Prelude model. The result was a high-end Reimyo/ Bravo speaker (2002) with an advanced version of the coaxial driver, stronger cabinet construction, bi-amping/bi-wiring possibility and several small details such as different connectors. Gradient Lauri from 2003 was basically a similar design than the Bravo, but was sold only in Finland.

Like the earlier Prelude, Lauri and Bravo monitors, Laura (2008) was based on the coaxial driver technology but had two passive radiators on the rear panel. In 2012 Gradient launched a new mini monitor that has much in common with Laura, the 5.0. 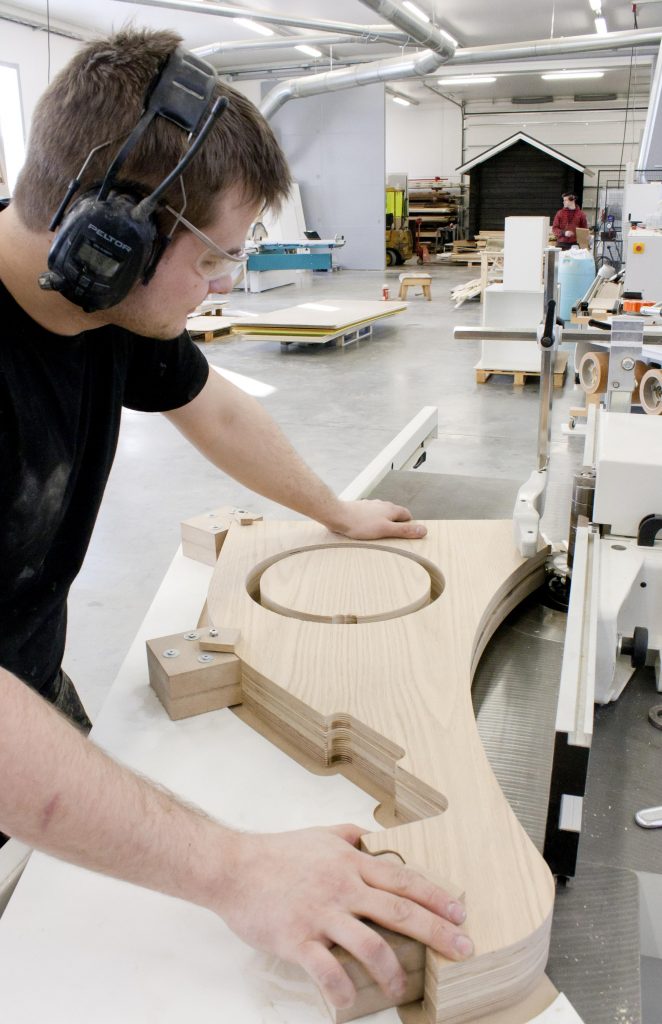 In 2007 the world of audio saw a most extraordinary looking loudspeaker called Gradient Helsinki 1.5. It had no box whatsoever (not to mention other clever design features), and yet managed to sound according to the best acoustic principles that have guided Gradient from the very beginning.