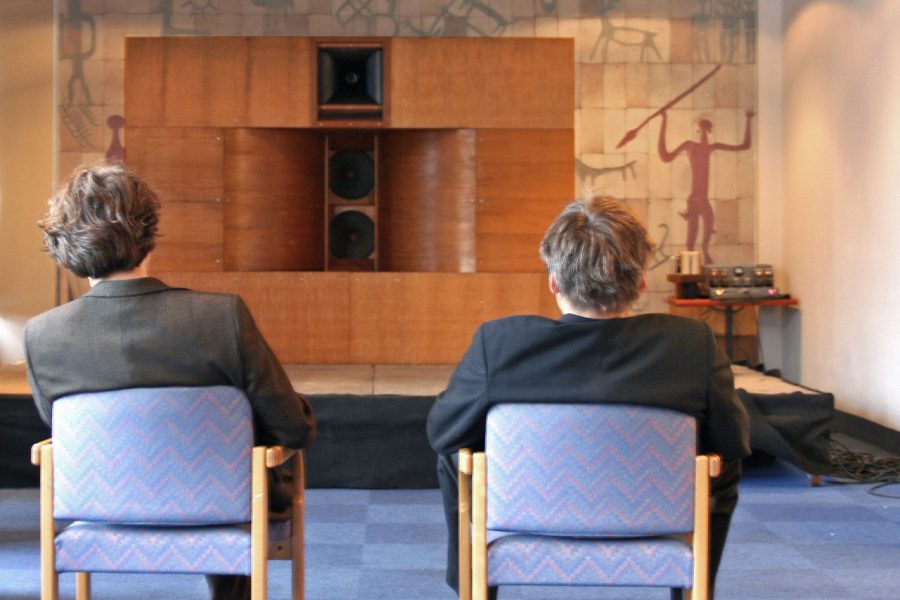 You know the feeling: you stumble across some really great piece of gear when you least expect it. Something you had only read about, something so rare that the chance of being hit by a meteorite is bigger. For me these rarities include the EMT 927 turntable (only 800 were produced), the Western Electric WE15A horn, and the big beauty that I will tell you about here: Klangfilm Bionor.

One day this spring a good friend of mine, Per Morten Ekerhovd, pulled out his cell phone and showed me a blurred picture of something he took for an Altec cinema speaker. He is into collecting vintage audio gear and had spotted this while travelling to a neighbouring town, a place you would never even hallucinate about finding classic audio gear, – so wrong, so wrong! Well, another VOT A7 I thought, not so special although an interesting speaker. I was baffled when I recognised it as the Klangfilm Bionor cinema loudspeaker.

There is a cult around early pro sound gear like Altec, Ortofon, EMT and Klangfilm to name a few, and I think the whole thing is a bit exaggerated. That said, some of this gear is based upon interesting, and sometimes forgotten techniques for making good sound: the intermediate wheel (idler) turntable and the acoustical horn, for example. These things are very well made, have an unmistakably industrial look and seem to last forever. Sound-wise they may blow away modern equipment in some departments and be lacking in others. That is what makes it so much fun. 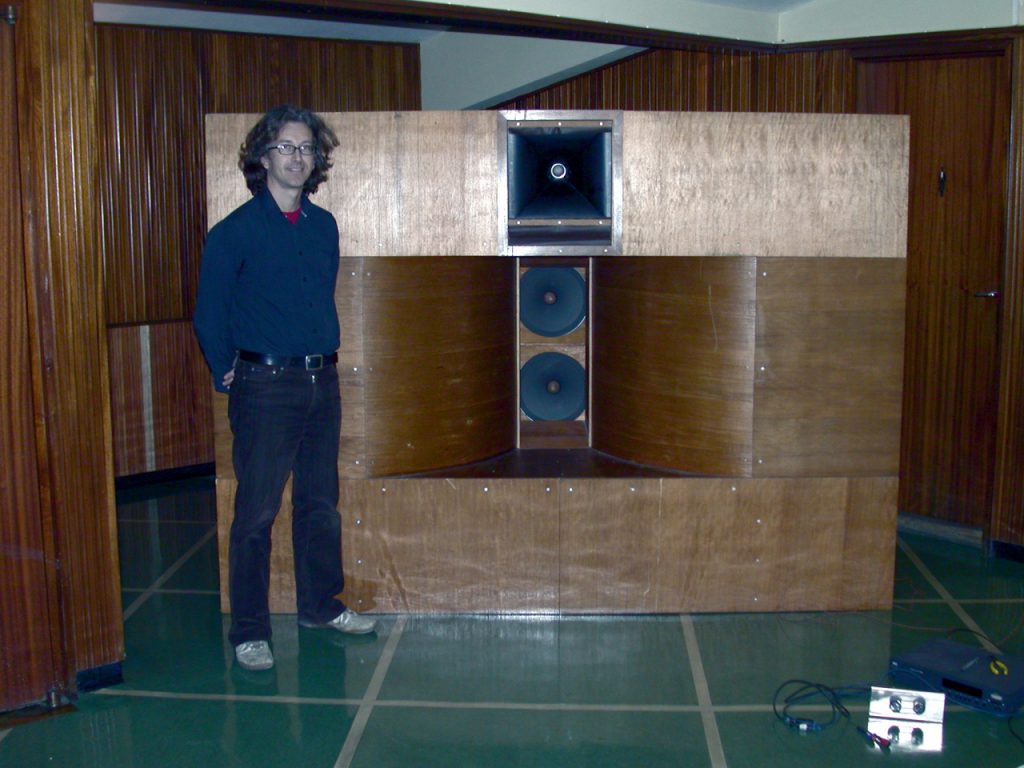 I have read a lot about big horn speakers and even listened to some modern incarnations myself but never before had I had the chance to hear any Klangfilm equipment. Some years ago two Bionor speakers where brought all the way from Japan to the CES 2003 Audio Show and demonstrated at the Lamm Industries stand. According to the reporters it was a jaw-dropping experience. So what could we expect this time?

This autumn we had the owner’s permission to test the speaker. The Bionor had been part of a cinema sound system that consisted of no less than four similar speakers. After being relieved of duty in the 80’s the only remaining speaker has been on exhibition in the cinema foyer. Would it work after all these years? Well it did! Some tests and inspections later we enjoyed listening to it for an hour or so. My 3 watt 2A3 single end amp made some earth shaking rhythms with this speaker; it has very high efficiency of course, as was the norm at the time when available amplifier power was limited.

What to do when you find only one loudspeaker? As a hi-fi treasure seeker, I would normally be disappointed only having found one of a stereo pair, be it amplifiers or speakers. Not this time, and the reason is that I’m currently in the mood for mono. This is the natural consequence of collecting old records, and some of my favourite records are mono. Why not build a dedicated mono system around it?

The speaker is so big it is difficult to capture in a single photo. The low frequency drivers looks like quite common bass units but are absolutely nothing like that. The paper cone is very light, the magnet strong and, what is very important for horn drivers, the suspension is stiff. The stiff paper surround helps to control the break-up mode into concentric modes. This extends the upper roll off frequency when mounted on the horn.

Luckily our enthusiasm spread to the owner. They even hired us to play it at some events before an audience. The last time such a demonstration took place was at the ”Odda litterature symposium”. Collaborating with the author Frode Grytten we made a program with literature and music. Giving a public demo on monophonic sound reproduction nowadays, when surround sound rules, could be quite an optimistic undertaking, but the impact this loudspeaker makes both visually and musically is nothing short of world class. We have had very good reports on the sound although the bass performance has not been right in the rooms we have so far tested the speaker in.

I hesitate on using any digital EQ on this speaker since I feel the concept of the mono system is so pure, so minimalist. We opened the session with some solo saxophone music, Sonny Rollins playing ”It could happen to you”. We were told that the demo gave people shivers down their spine because the sound was so real. Another guy told us afterwards that he had never heard the Paris Texas theme by Ry Cooder sound so good. Take it for what you want, my point is that we at least managed to communicate some good music with this system, and the audience seemed to be concentrating on the music and to be moved by it. 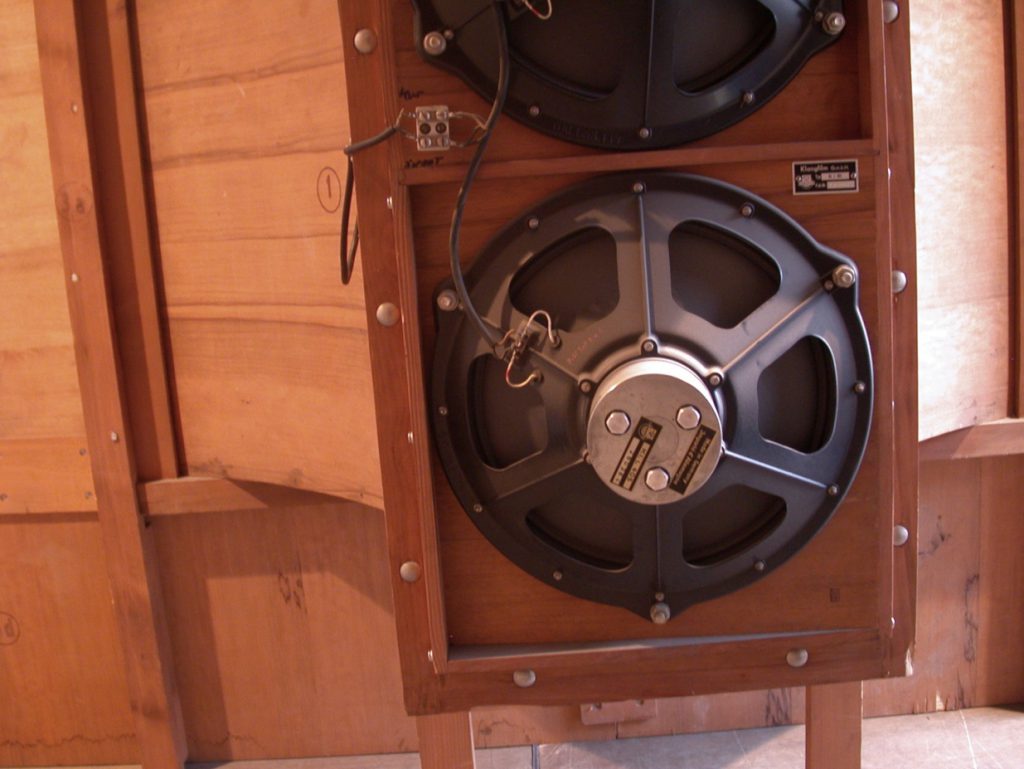 First of all, the sound radiating field of this speaker is very different from that of an ordinary speaker. The speaker is open at the back, and it is fascinating to walk around it, and listen to it from all angles. Unlike many other baffles, there was no bass behind the speaker, obviously due to the horn loading. Remember that with horn loading the diaphragm barely moves. In front of the baffle/horn mouth the bass thunders! This is a very good demonstration of horn loading in practice, and I wish everybody would have a chance to try it. Touching the bass diaphragm carefully with fingers when the system is playing is quite weird: why is it not moving? Where does the sound come from? Of course it is moving, but very little – the horn does its job well.

This speaker needs a big room: the sounds from the two horns need some listening distance in order to blend properly. The sound over the upper octaves is soft and refined with very little horn coloration. True, the speaker also beams to some extent in the treble but not more than other horns of this type. I don’t want to make conclusive judgements on Bionor’s bass performance yet because the placement of the speaker, standing close to hard reflecting surfaces, was far from the optimal, and standing waves in the room made it even worse. The speaker is also missing the feet to raise the baffle from the floor such as I have seen in some pictures. The feet probably make a difference too, but they are not shown in the technical drawings of the Klangfilm.

Anyway, my impression is that this speaker manages to recreate the true timbre and dynamic impact of real instruments like very few others. It has a huge sound, centred around an excellent homogenous mid band, but there is not much energy at the frequency extremes. There is one quality present that I think places it in a class of its own, and that is the ability to play loud and very clean in the octaves from 100 – 400 Hz. That is right where the big horn excels; the horn has a theoretical mouth cut-off at about 80 Hz and is not curved.

Two turntables as in a real DJ set-up. The Swiss workhorse, the Lenco L-78, is a great intermediate wheel turntable here supplied with a modified Stax UA-7 arm and a series coupled Denon DL-103. The Lenco is also very useful for playing 78″s. We used a Shure ME75 equipped with a special 78″needle. Miles Davis sounds wonderful on this one. 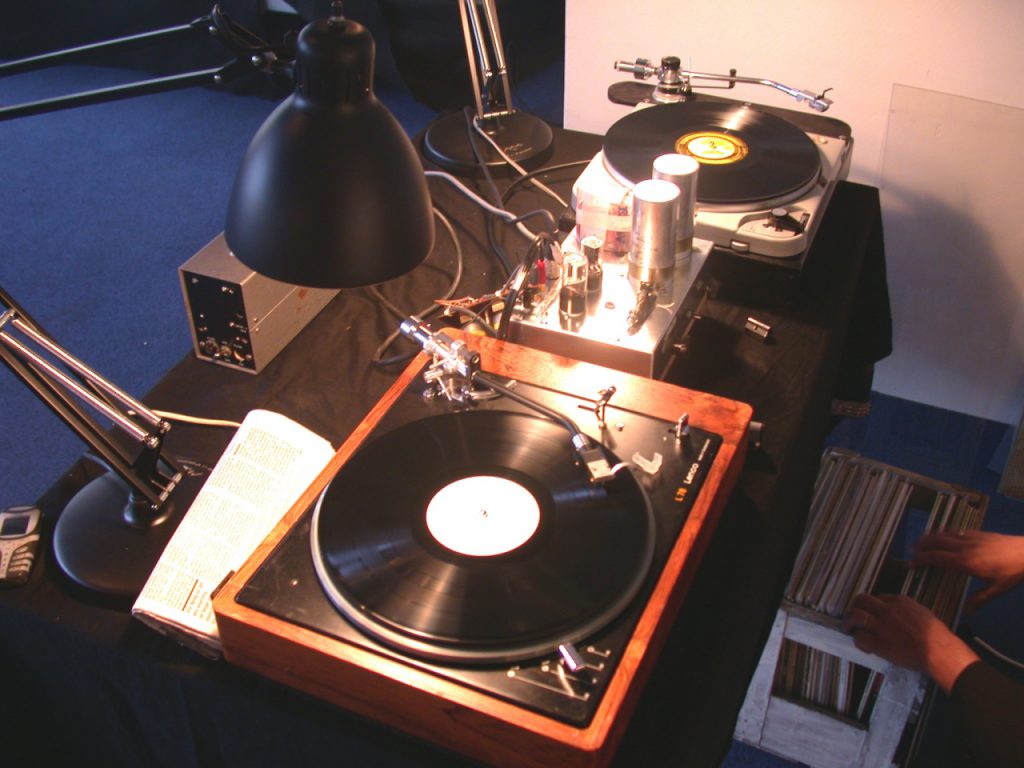 Regrettably, mono listening has been totally overshadowed by stereo for a long time. After years of focus on the stereo format, present day music lovers seem to have forgotten the art of mono reproduction, myself included. The fact that so much groundbreaking invention of jazz styles happened in the mono era is in itself a reason to give proper mono playback a listen. When I say proper, that means one channel and a single speaker, not two as in a stereo system. Just try it at home: the sound is more ”whole” and stable with one speaker.

Stereo and mono sound reproduction needs to be captured in different ways due to the inherent electro-acoustical and acoustical properties of the two formats.

The concept of soundstage has developed alongside the evolution of computer-designed loudspeakers in the eighties, and it is really amazing what can be achieved this way. In stereo, we want all the room information on the recording to spread out nicely in a phantom image of the real placement of the instruments at the recording session. To achieve this one needs absolutely identical speakers preferably in matched pairs. I dare to say that this stereo goal has become the main quality of today’s speakers, while other qualities such as dynamics and efficiency have been forgotten. In my experiments I have found that the best speaker for stereo isn’t necessarily a good mono reproducer and vice versa.

Mono sound naturally cannot rely on a broad 3D soundstage. Thus, one has to focus on other criteria such as dynamics, uniform frequency response and low distortion in order to produce high fidelity. However, with a good amplifier it is fully possible to reproduce a kind of soundstage on the front-to-back axis. Mono doesn’t have to sound flat: much depends on having a high-resolution system, with the amplifier being of primary importance. Some mono recordings actually have a lot of room information, reflected sounds and echoes that add some ambience to the music. The mono sound is also very dependent on the tone, on transparency, on low distortion, and all of this has to be taken care of. That is where good horns enter into the scene.

What can we learn from our mono Klangfilm Bionor experiments? First of all regarding horns: the bigger the better. Secondly, there is no reason to laugh at the light paper diaphragms and stiff surrounds – so different from the long throw woofers we are used to. This is a refined horn system with perfectly balanced parameters that can play really loud. Third, our mono system is a good candidate for an ideal mono system. When it comes to owning one of these speakers, however, forget it: there’s absolutely no chance that you’ll ever find one. 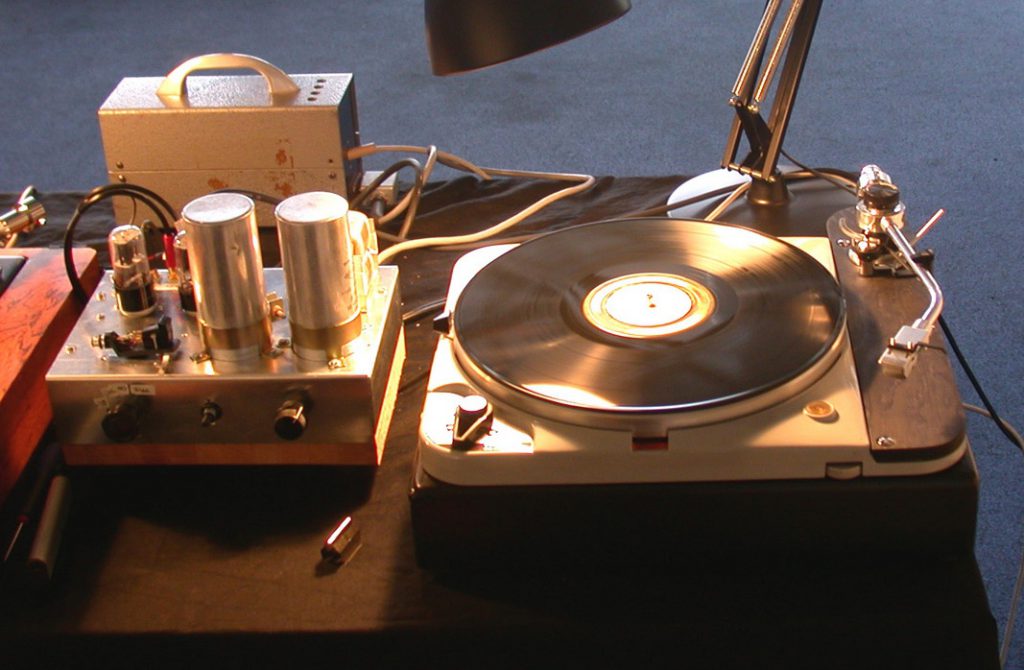