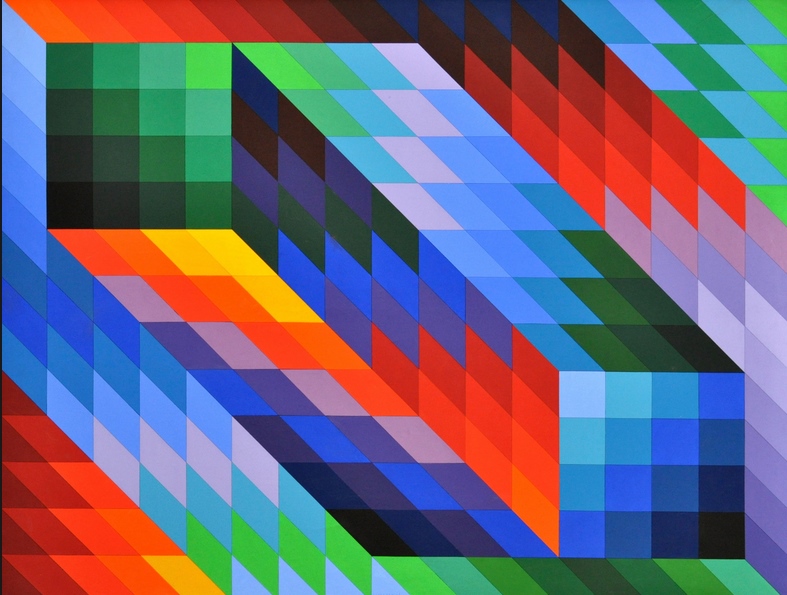 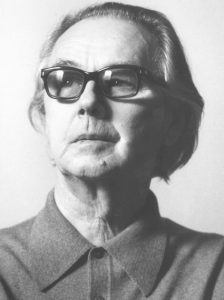 The plastic alphabet is a kind of programmed language with an infinite number of form and colour variations. The basic unit of the alphabet is a coloured square containing smaller basic shapes like squares, triangles, circles and rectangles. Vasarely used these patterns and primary colours plus endless colour permutations as the duplicating and changing elements in his works. In each unit there was a number which determined its colour, tone, form and place in the whole.

Vasarely saw that his plastic alphabet by enabling serial production could open the way to countless applications. It could be used as the basis for planning houses and whole environments for cities: it offered countless permutations of form and colour, and the size of the basic unit could be changed or enlarged as required. 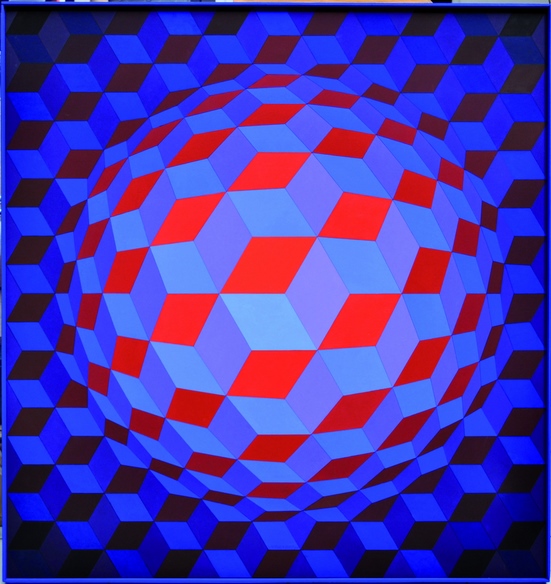 Soon his colourful, Op Art illusory world spread into the commercial sector, advertising, fashion, design, magazines, even record and book covers. Vasarely’s works were popularised and copied, often without permission, but he didn’t care. His mission in the 1960s and 1970s was the democratisation of art. (Right after the exhibition me and my daughter visited a local “accessory shop” and were amazed how many of the articles on sale, including those unrelated to the exhibition, had, accidentally, Vasarely’s patterning and coloring elements in them!) 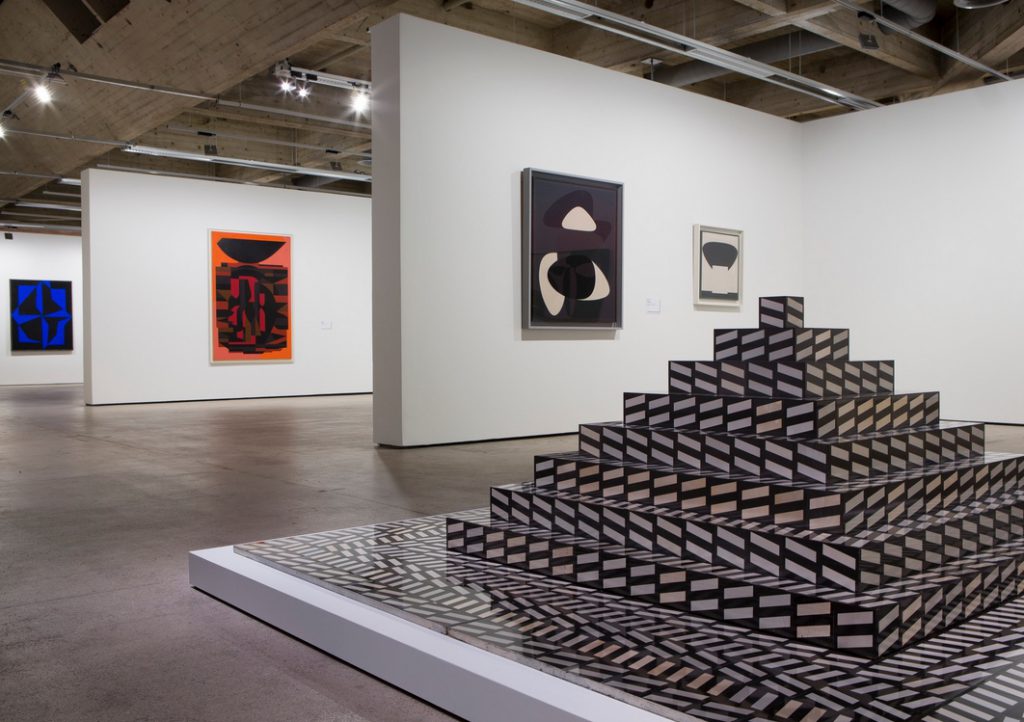 “In mid 20th century, music and painting underwent, in a sense, opposite evolutions. The musical horizon enlarged thanks to the arrival of concrete and electro-acoustic music: unwritten music with a technological tradition, whose transcription is difficult if not impossible. By formalizing the concept of plastic art and opposing it to the traditional easel painting, Victor Vasarely’s visual art acquired a geometrical rigour comparable to the one of music and mathematics.

Vasarely’s form-colour identity finds its counterpart in music. Poets have devised the analogy of timbre and colour. The height of a sound makes reference to its place within a range, in its turn defined by a mode and a tonic. The characteristics of the hearing apparatus explain why one hears timbre and pitch as two distinct realities. In fact, these two perceptions correspond to the expression of a single phenomenon – the acoustic vibration – thus leading to the timbre-colour identity. 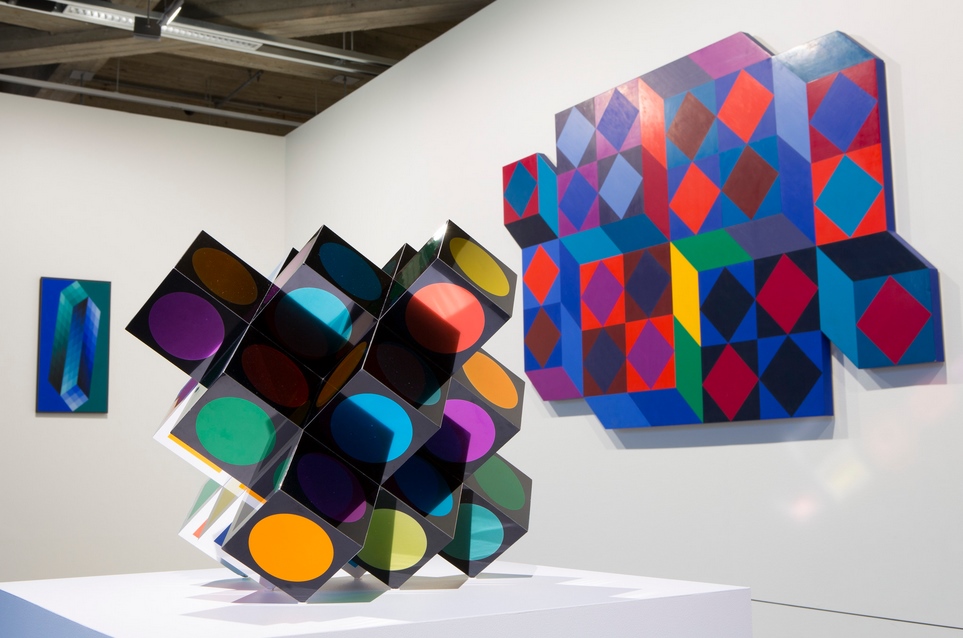 Vasarely’s “Plastic Unit” appears then as the pictorial counterpart of the musical note, of the musical cell, of the “Sound Object” (as Pierre Schaeffer defines it in “Le traité des objets musicaux” of 1966), of the “Semanteme” (defined by Jorge Antunès, the composer, as a minimum sound fragment provided with meaning and identified on the basis of emotion), or of the “Time Semantic Unit” (a notion submitted by the information and music workshop of Marseille, consisting of a sound figure whose meaning is expressed by time).

We shall group here the notions of note, musical cell, Sound Object, Semanteme and T.S.U. under the more general concept of Musical Unit. And we will oppose the Musical Units which can be transcribed (notes and musical cells) to the ones which cannot (Sound Objects, Semanteme and T.S.U). The duration, the intensity and the timing of the Musical Unit within a composition are the musical counterparts of the form, the dimension and the comparative position of the Plastic Unit in the bidimensional space of a painting.” 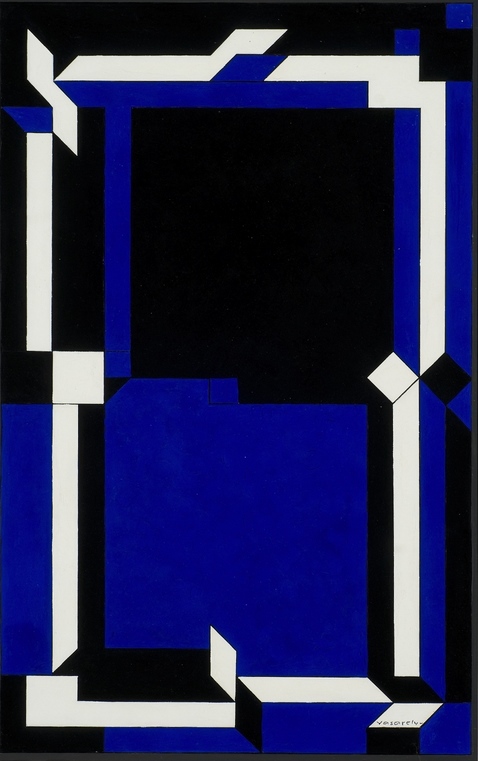