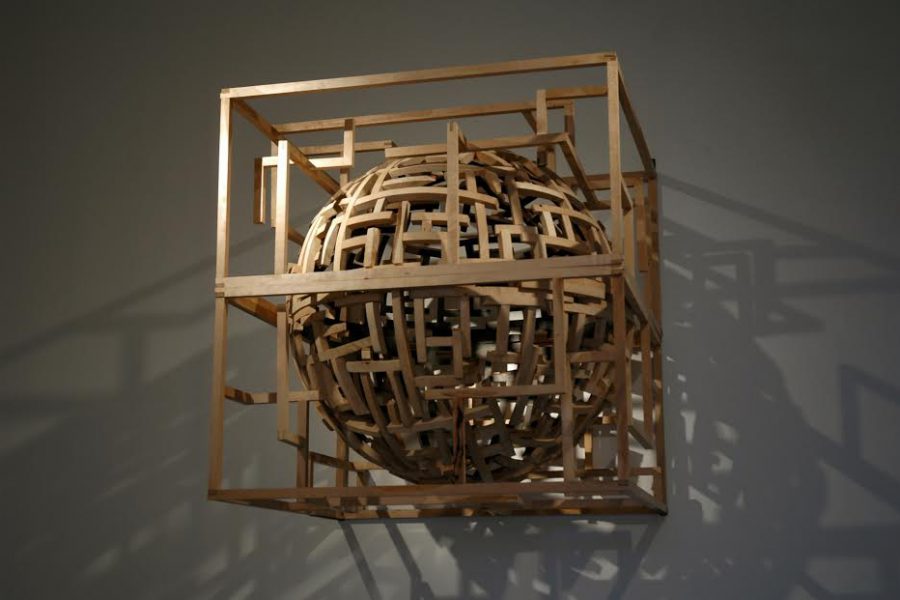 Veijo Ulmanen lives in an old timber house in the middle of Southern Finland in a town with not much difference. The timber is half a meter thick. That didn’t Veijo from sawing two holes in the wall for his PHY 12″ widebandwidth drivers. Not only was it a clever interior compromise with his wife, but also: wall-mounting is semi-perfect for the units.

Veijo is not an expert in sound, he’s an expert in images, and those of 3D sculptures especially. He’s a sculptor. He studied at the highest level industrial design hoping that one day he could be a real artist. Nowadays, whenever he’s not listening to music, or giving lectures, he processes his works in his studio.

When Veijo sculpts he sculpts big. Some of his sculptures are a house high, at minimum of a size of a man. Quite often his constructions have a round shape like a globe. Why? As is common among artists, Veijo doesn’t have a straightforward answer. He’s analyzing his works differently, not in terms of reasons. 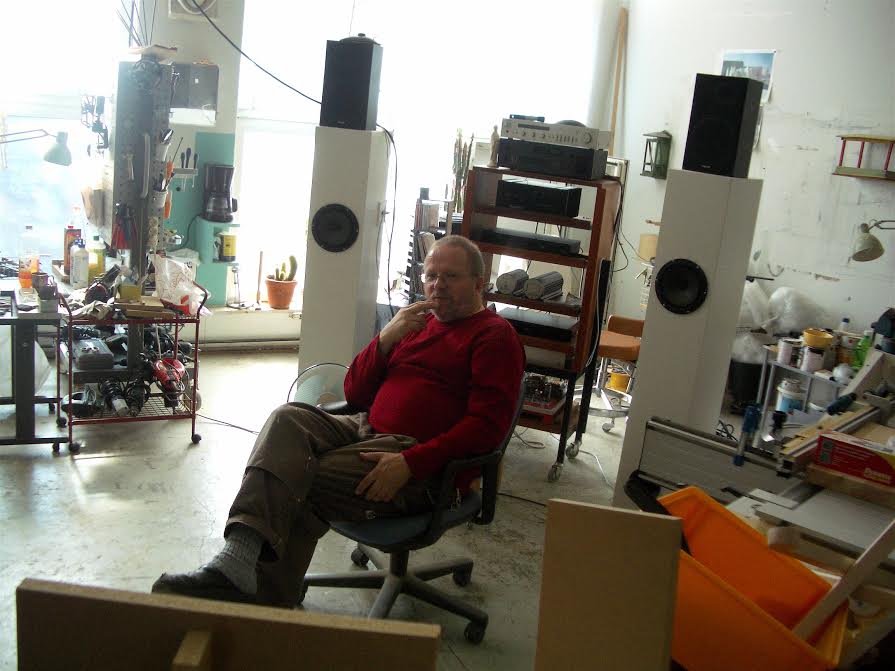 He’s noticed that frequently his starting point is furniture and “all sort of objects that he walks into”, because “the world of objects interests me”. Second hand markets are a heaven for someone who’s looking for visually inspiring objects. “What in fact is the difference between an object and a sculpture, … or some creation of an architect for that matter.” 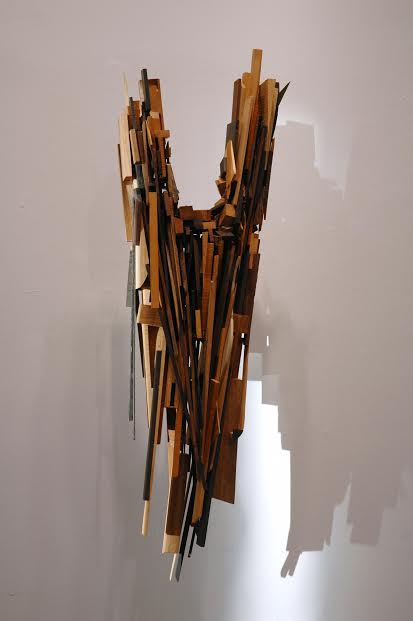 We’re watching an egg-shaped miniature sculpture on Veijo’s table. The surface of the ball is decorated with tiny retangular and curved wooden pieces. Cubism? Surrealism? Is here the essence of Veijo’s language of form? Fixed idee? No, says Veijo. So what was it that gave the miniature its form? ”I don’t know … some goddamn piece of textile, half of a mitten.”

This sort of works he’s being working on since the mid 1990s. Before that not even wood wasn’t sacred. Sculptures were born out of glass fiber, for example. ”Wood is a familiar material for me since the artisanal school. There’s always the question of the price too. Brass is brass-priced.”

“At the time when I was studying I greatly admired the works of Constantin Brancus, and the Finn Osmo Valtonen. I represent the generation when everybody was well aware of the old masters and they were honoured. Actually there were quite a many role models.”

“Just as in my Hi-Fi hobby, I fumble with things that I know nothing or almost nothing about.”

Suddenly Veijo seem to find the key for his creativity: Just as in my Hi-Fi hobby, I fumble with things that I know nothing or almost nothing about.”

That’s not quite true. Veijo must know how to support his massive sculptures so that they stand firmly. That sort of engineering wisdom Veijo says he has obtained by repeating certain actions one after another. 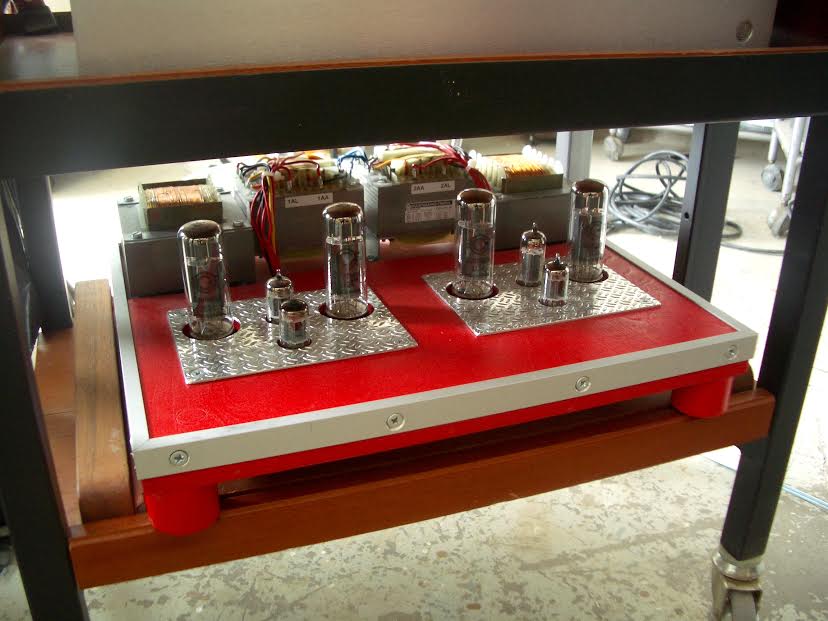 ”It’s no more enough that your name appears in a roll with other famous names. Buyers of the state are very important customers as are those who admit grants. It’s a must to participate in contests. Veijo has won some but even that doesn’t always mean that the winning works would always be carried out. Very often not. It’s far from easy to live with your art.” 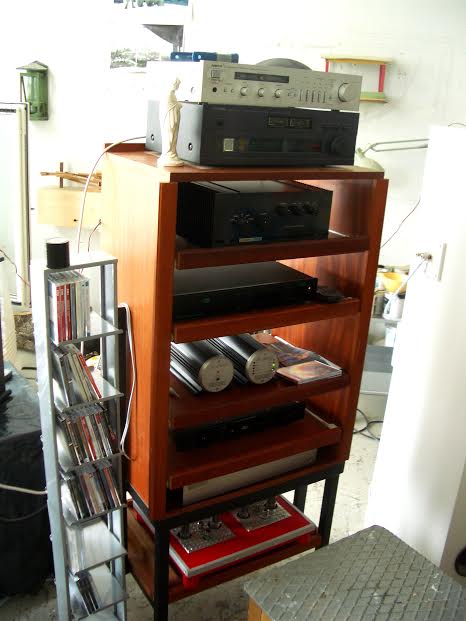 How’s music read into your sculptures?

”It’s not, directly. Or you might think that there’s music just as much there’s music involved in art in general. I’m listening to music all day long, especially FM radio. Music does not disrupt my creativity.”

How then did you get interested in better sound reproduction? ”It happened not so long ago. As so often, when the children grew older there was more time for my old records, and along with that came the desire to acquire better Hi-Fi equipment.”

Veijo is not too dissatisfied with either of his systems. There’s one major problem though: the dust in the studio. Dust is everywhere despite several vacuum cleaners. Veijo has considered building a glass wall just the loudspeakers sticking out to the working space!