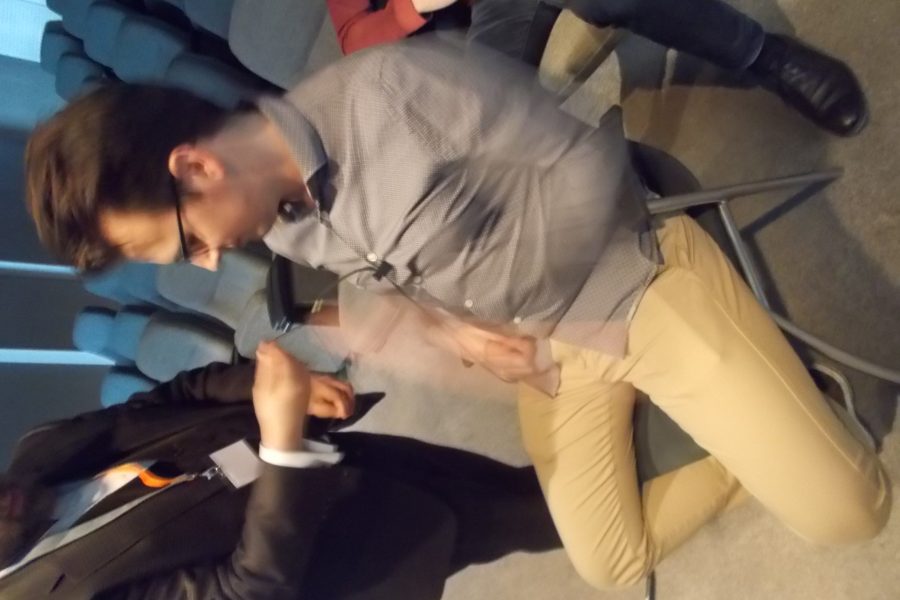 At the recent Stockholm Highend Show, Prof. Edgar Choueiri lectured audiophiles  on the BACCH 3D Sound System, the developer of which he himself is. I took part in the demo twice, as it appeared to have some real substance in it, both on paper and practice.

BACCH 3D Sound is ”an invention in audio technology (licensed by Princeton University) designed to yield unprecedented spatial realism and a truly 3D sound, a recorded soundfield with uncanny accuracy and detail, and with high tonal fidelity through only two loudspeakers.”

Briefly put, the way in which the BACCH 3D Sound technology aims to do what it promises is that it creates conditions for true binaural audition, and does the required crosstalk cancelation, not by buiding up a wall between the speakers, but electronically with a bit of dsp inside a single digital processor.

It is this crosstalk cancellation that is believed to ensure “proper transmittal of the CD’s stereocoded 3D cues to the brain leading the listener to perceive a realistic 3D sound ﬁeld”. According to Prof. Choueiri such cues exist in abundance in practically all well-made stereo recordings.

BACCH 3D Sound thus has nothing common with surround sound, which aims to provide some degree of sound envelopment for the listener by surrounding the listener with a number of loudspeakers.

The ”bit of dsp” behing BACCH 3D Sound is called a BACCH filter. The filter is applied to any stereo sound input. The processor then filters out the fundamental ”impurity” (crosstalk) that occurs whenever stereo sound is played through a pair of loudspeakers.

It is the BACCH digital ﬁlter that places an invisible sound “barrier” between the listener’s left and right ear by forcing the left and right speakers to emit positive and negative pressure waves appropriately timed to cancel the crosstalk at the ears of the listener. 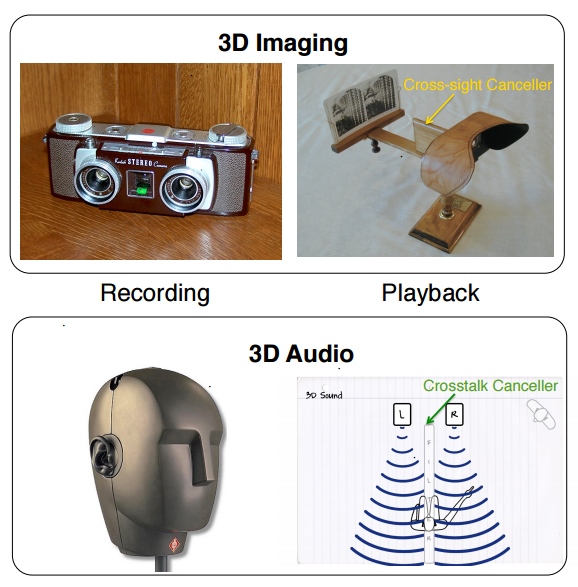 For example, for an impulse to be perceived at the left ear only, says the product description, positive and negative impulses are emitted from each speaker with the proper delay and attenuation to cancel out the crosstalk perfectly, so that only the ﬁrst impulse is heard and only at the left ear.

However, since ”the perfect XTC ﬁlter at the loudspeakers is not perfect with respect to its frequency response, a frequency-dependent error is deliberately added in the inversion of the transfer function C in order to minimize both the severe spectral (tonal) coloration and the crosstalk level, and to meet a psychoacoustic target frequency response”.

So the real breakthrough behind the BACCH 3D Sound technology is said to be a method for designing completely transparent XTC ﬁlters, i.e. with no tonal alteration to the sound. 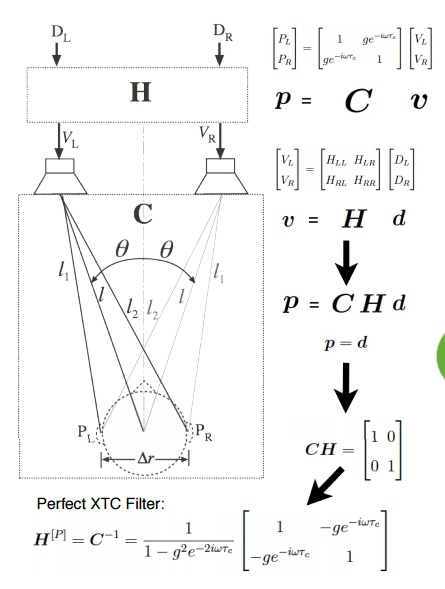 BACCH 3D Sound can be implemented in any hi-fi system by adding just a single dedicated high quality high-resolution (96 kHz, or 192 kHz, at 24 bits) digital processor that applies, in real time, a customized digital filter (called a c-BACCH filter) to any stereo sound input.

Apart from addind spatial realism to sound reproduction, the same digital filter used in BACCH™ 3D Sound, is also used to correct, in both the frequency and time domains, most non-idealities in the playback chain, including loudspeaker coloration and resonances, listening room modes, comb filtering, etc. The resulting frequency and impulse responses at the listener’s ears are claimed to be semi-perfect.

The processor itself is described as a high-quality (transparent) digital audio unit, containing a dedicated and quiet Linux computer, with a highly-stable specialized operating system, coupled to an audio stage consisting of audiophile-grade (D/D, D/A, and A/D) converters and components.

The processor sports an on/off button and a button to switch between various customized BACCH 3D Sound filters, corresponding to various listeners, and/or listening positions.

The latter is required because, in addition to the universal BACCH filter based on measurements made with a special dummy head (microphones in its ears), another customized BACCH filter (called c-BACCH) exists made using in-situ acoustic measurements of the audiophile’s entire listening chain, including his hi-fi hardware, loudspeakers, head, torso and ears.

The filter/processor sends special test tones through the hi-fi chain and recording the sound with miniature microphones placed at the entrance of the audiophile’s ear canals as he is sitting in a sweet spot of his choice. It takes about one minute to do this measurement.

This is exactly what happened in Stockholm. Audiophiles were asked to come down and be test persons for whose idiosyncracies (outer ears, head shape etc.) the filter was adjusted. 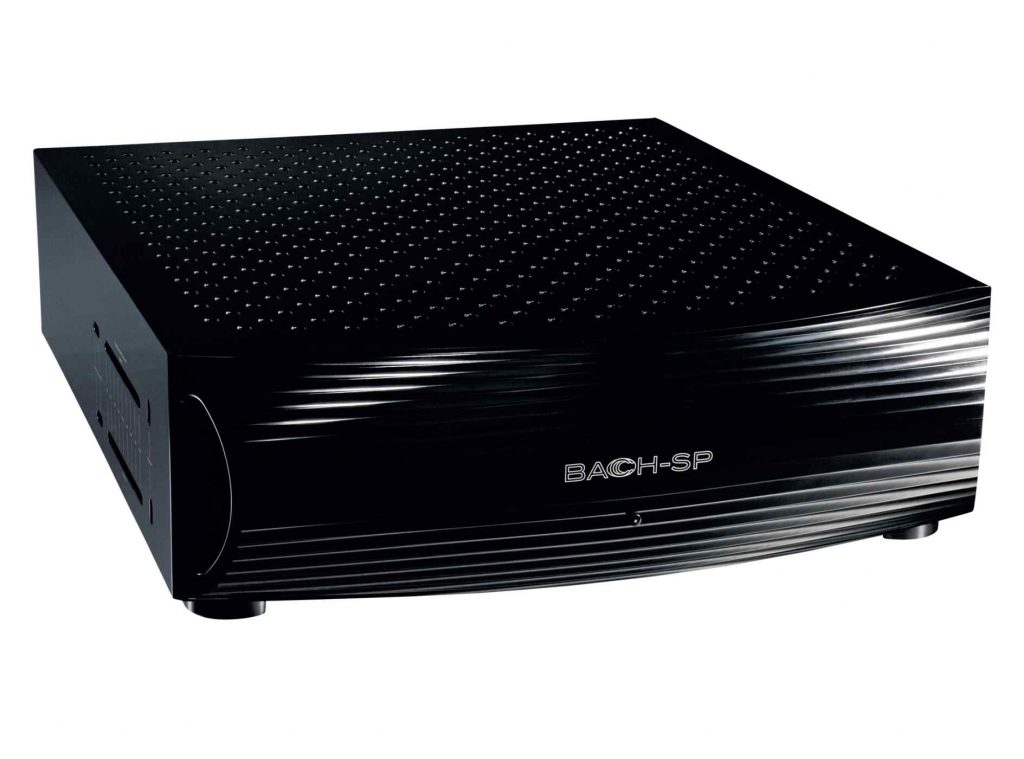 Rather than surrounding the listener with a number of loudspeakers as in surround sound, BACCH 3D Sound make use of the stereo recordings’ 3D cues in order to give the brain the proper information needed to correctly perceive true depth and width of a sound image, by removing an artifice that occurs during stereo playback through a pair of loudspeakers. Surround sound does not attempt to do that.

No special requirements are set for the loudspeakers to be used with the BACCH 3D Sound: in theory, any loudspeakers go.

So audiophiles are able to choose various locations in which they like to have a BACCH 3D Sound sweet spot. A filter is then designed for each location and the filters are loaded in the processor. As was nicely demonstrated during the lectures, when sitting in the sweet spot, the listener does not sense that sounds are emanating from the loudspeakers, and therefore disappear acoustically.

BACCH 3D Sound is claimed to radically improve to the realism of sound reproduction of Hi-Fi chain. And I think it’s true to say that the BACCH 3D Sound does add spatial realism to the sound, but how radical the change subjectively is, depends on how much the listener values his Hi-Fi system’s spatial properties: not all audiophiles are equally keen on having an accurate 3D soundfield reproduction – other properties of the sound matter more. But there are those for whom the system’s spatial reproduction is the ultimate measure for its goodness, and those audiophiles should at least get familiar with the BACCH 3D Sound.

After having heard the Stockholm lectures, my first thought was that the the real issue with the BACCH 3D Sound might be how it works with different types of recordings? If the system’s relative merits were present only with certain type of recordings, eg. recording made just with a single pair of microphones, it would clearly limit the usability and interest in the system?

But what about pop/rock etc. recordings that contain artificially constructed sound fields (with unnatural ILD and ITD cues)? Where will the sound be located with such recordings?

The developers of the BACCH 3D Sound are convinced that ”virtually all stereo recordings contain enough 3D cues that could be saved and sent to the brain of the listener with BACCH 3D Sound playback for a true 3D sound”. For stereophonic recordings that contain natural ILD and ITD cues (most well-made recordings of “acoustic music” such as most classical and jazz music recordings), BACCH 3D Sound is said to offer similar 3D realism as for binaural recordings, and that I would accept.

But what about pop/rock etc. recordings that contain artificially constructed sound fields (with unnatural ILD and ITD cues)? Where will the sound be located with such recordings? The official answer is this: ”Many of well-made popular music recordings over the past two decades have been recorded and mastered by engineers who understand natural sound localization and construct mostly natural-like stereo images, albeit artificially, using realistic ILD and ITD values. Such recordings would give a rich and highly enjoyable 3D soundstage when reproduced through the BACCH™ 3D Sound.”

If lectures/demos left something open, it was this. I would have liked to eliminate the possibility that the system is of value just to classic music fans, and people who choose their recordings according to acoustic characteristics of the recording. The demo recordings appeared to be from the better end of the spectrum, the sort of recordings with which the already well recorded sound field became even more spectacular.