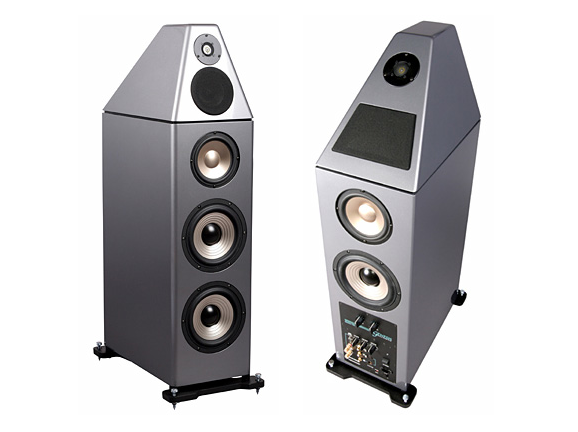 These speakers ain’t a man without qualities; they have more features than many similar speakers all combined. In addition, Genesis Technologies (founded by Arnie Nudell in 1994) belongs to those speaker manufacturers who take seriously the issue of speaker placement. We need to talk about that too.

Americans do not dump products simply because they’re old, provided they’re still working. And they often are. Many examples come to mind, and that holds true of Genesis 5 speaker series from the mid 90s. The G5.3 was born out of G5.2 from 2004. According to the manufacturer, the G5.3 sports better components than its older brother, and thanks to certain changes in the crossover can be driven even with tube amplifiers.

Behind the 5.3 I find traces of American megalomania (admiration simply for the sake of size) but even more true American “full range” thinking with extended, powerful bass. The approach is dressed in the thesis about Absolute Fidelity.

Simplifying a bit, the thesis says that in order to achieve “absolute fidelity” the speaker must be able produce all the sounds of the natural world with their wide frequency range and large dynamic variations, exactly as they are heard in the nature. Technically this means that for the frequency response, 20Hz to 20kHz is not enough: useful and important musical info exists outside the range and the speaker must be able to do those sounds too. “Absolute Fidelity” also requires that the speaker picks up the smallest details from the recording even at low volume levels.

The tweeter is an upgraded version of the 25mm ribbon tweeter originally developed by Infinity. Unlike many other ribbon tweeters this one is round, and therefore has a radiation pattern (presumably) different from that of long and narrow ribbons. 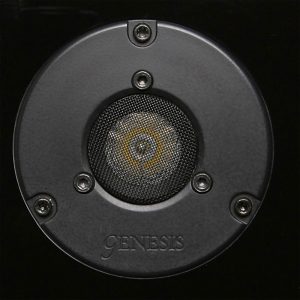 There are two of the tweeters on both sides of the top part at roughly a 45 degree angle and performing out of phase. Genesis claims that the result is a “dipole” but it seems to me that the distance between the tweeters is too long relative to the wavelengths they are asked to reproduce, so that no pure and nice dipole pattern would be born. Some cancellation sideways is likely to occur, I assume.

For the midrange there’s a 4,5″ titan driver in an open back enclosure, and in between this driver and the woofer section Genesis has placed two 6,5 aluminium drivers, one in front, the other on the rear side. The drivers push air out of phase in order to keep the direct sound as clean as possible.

Bass (16HZ to 120Hz) is reproduced with three 8″ aluminium woofers, one of them back firing. The units are mounted in a sealed cabinet and do their duty in phase. This is how Genesis believes room modes are best fought against. The behavior of the woofer cones is controlled by a servo in order to minimize distortion and improve transient alresponse. In short, a servo is a system that corrects the signal (and thus woofer displacement) sent to the voice coil according to the signal inputed to the amplifier.

Despite the announced sensitivity (90dB) the 5.3 seemed to love power.

Behind the woofers a 500W Class D amplifier is hiding. For the rest of the frequency band Genesis recommend a >60W amplifier. Despite the announced sensitivity (90dB) the 5.3 seemed to love power. For example, the hands of the 200W McIntosh MA6600’s watt meters pointed somewhere North-East even with calmer music.

The crossover impedance of the G5.3 has been increased to enable the use of 50-100W tube amps. As Genesis puts it: “the lowest impedance point does not result in reduced output voltage from the amp, and a consequent hollowness in the midrange”. I didn’t have such an amp at my disposal but my 10-12W tube power amps were clearly underpowered for the needs of the 5.3. In case that the power amp runs out of power, the 5.3 can be connected directly to a preamp.

The strategic measures are H 114cm, W 28cm and D 56cm. Given its background ideology the 5.3 is not a bad looking speaker. In fact, it looks quite living-room friendly.
The foot is clever: metal spikes, an acrylic bottom plate and neoprene shock absorbers work together to make the system stable and isolated from the environment. Once the optimal position of the speakers is known, the whole 70kg is lifted up from the floor with the spikes until the speaker sits on top of the shock absorbers against the bottom plate. 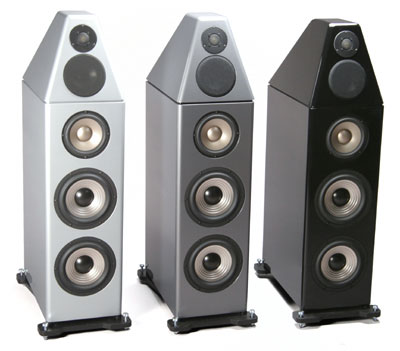 Patience with the speaker placement

As a rule, Genesis does not design its speakers for treated rooms. It’s therefore necessary to pay extra attention to the speaker placement. Genesis’ proposal is to position the speakers so that the distance from the rear wall corresponds to 20% of the room length (min. 60cm from the wall behind). The distance between the speakers should not exceed 2 metres (1,8m-2,4m), and they should be directed parallel to the side walls leaving 3-4 metres between the speakers and the listening seat.

It would seem as if the stereo angle remained quite narrow in this way, and that the sound therefore escapes long back as with some mono recordings when listened with two speakers. Genenis argues that with the narrow angle the center image does not get unnecessarily emphasized and that the useful listening area remains wide enough. Another argument, an interesting one, is that with the narrow angle the sound from the mid/bass drivers of the two speakers is better integrated – an useful advice for any speaker placement.

Next I took a simple vocal recording, as recommended by Genesis, and keeping the low pass setting at 90Hz I increased and decreased the bass gain until the voice sounded natural and smooth over the mid and upper bass. A highly important adjustment! Then I chose some bass-full recordings and with the low pass control tried to get a right amount of warmth to the sound. Afterwards I always tested with a vocal recording that there was not a decibel too much bass.

I must admit that, prior the audition, I had some reservations about the narrow stereo angle. The more I was surprised when I noticed how satisfying it was. The sound came from the center but also sufficiently far from sides. No unjustified escaping here.

The 5.3 is not one of those speakers that “disappear” thanks to their strong center image that drags the sound away from the speaker cabs. Genesis 5.3 ain’t Gradient Revolution. There is dipole-type of airiness in the sound, but it’s obvious that with such a narrow placement some of the info that is being recorded left or right comes from the direction of the speaker cabs. The main point is, however, that this didn’t feel incorrect or otherwise unacceptable.

There is dipole-type of airiness in the sound, but it’s obvious that with such a narrow placement some of the info that is being recorded left or right comes from the direction of the speaker cabs.

The focus of the sound stays at the line between the speakers or behind it, and does not spread out all over in the room and onto the listener’s face. Intimate recordings are being reproduced in a credible manner given that the volume setting is correct. Orchestral music as well comes out great, naturally and convincingly, not because the speaker would surround the listener with hall acoustics, but because of the strong dynamics, clarity or intelligibility of the sound, plus dozens of low-level details were beautifully offered to the ear.

I was particularly enthusiastic about this last feature. Both piano music and contemporary music live on tiny but musically deeply important sonic cues. Genesis 5.3 reproduced eg. piano’s fragile reverbs masterfully, with rich nuances and with precisely the right length (some of them are really long when they’re ably reproduced). Various studio recordings too revealed unexpected sonic details.

No color, not boring

The highest frequencies were outputted (HF control at 0 setting) accurately and rapidly but also inconspicuously, in terms of modern hi-fi, perhaps too much so. Transients were finished as they should.

There was practically no bass-driven music that the speaker would not have managed to support without being gushing. Somehow I felt that the servo made the woofers follow it by commanding, not fully voluntarily.

As for frequencies below 100Hz, one needs to be careful with the level, especially if the room suffers from resonances in that area. The speaker easily seems to produce very low sounds (eg with guitar recordings) that continue to live their own life. This shows how important it is to make correct rear panel adjustments at the outset.

Because the room had quite a bit midrange dampening I slightly tuned in midrange from the control knob. Despite of this the Genesis 5.3 does not produce midrange that would be equally euphoric as with some widebanders or horn speakers. That type of midrange simply isn’t among its priorities. Pleasing the listener in all possible ways is not what this speaker is designed for; it’s designed for reproducing the program material “as it is”, and in that job the speaker is highly competent.

And more. Genesis 5.3 is one of the few high-end loudspeakers that I can imagine could be used as reference speaker, as a tool I mean, in official listening tests, not because of its impartial sonic policies but because it doesn’t sound boringly grey or colorless as many such speakers tend to do, no matter how technically correct they are.

There’s obvious quality in the sound of the Genesis 5.3. With the price of almost 28000 euros, there should be. It is typical of this speaker that it doesn’t reveal its strengths with the first handshake. Little by little the listener becomes aware of all its qualities, and the appreciation just goes up and up.