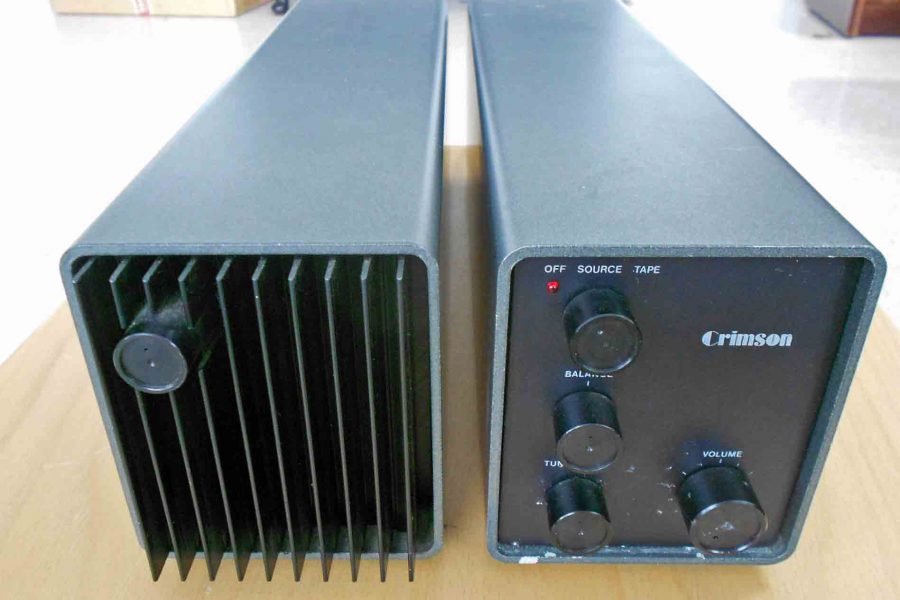 First, a piece of history. Brian Powell founded Crimson in 1976. The company soon became popular among hi-fi hobbyists by making amplifier modules for at the time florishing kit markets.

Judging from the serial numbers 529 and 387 (power amp) this Crimson pair left the factory during the second half of the 1980s. This particular Model 610 preamp took the power from the power supply of the Model 620. Whether it has always done so is another story. The preamp has a dedicated space for two 9V batteries and connector for the charger, which could indicate that the preamp originally was battery-driven! 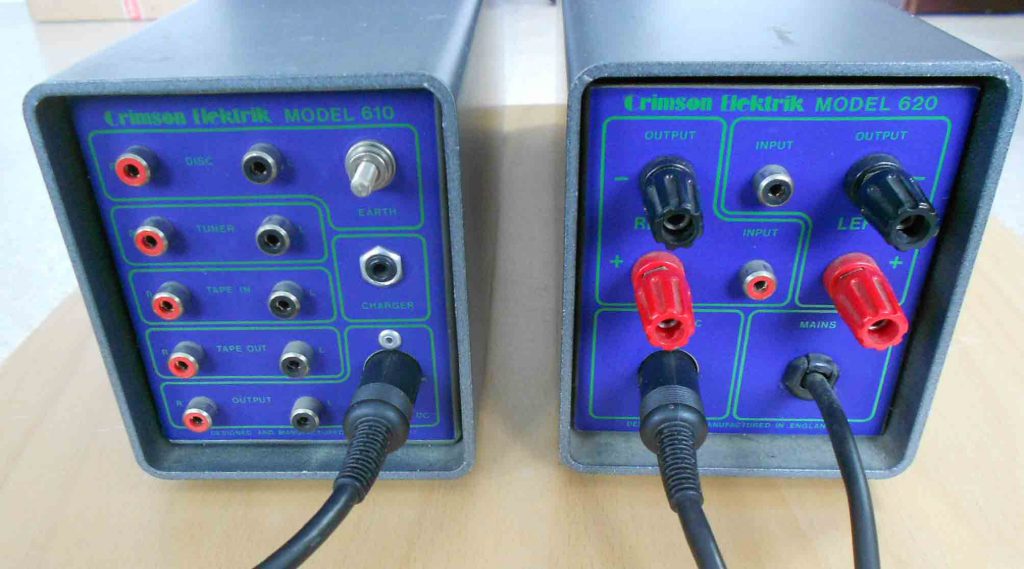 Two inputs, one for a tuner, the second for a turntable. Tape out functions as an input too. The front panel sports off/source/tape-switch, the volume and the balance controls, as well as the input selector.

From inside the Model 610 is cheerfully naked. The most visible part is the blue PCB stuffed with ITT components. Somewhere on the PCB holes up a MM phono stage. Totally notorious components I didn’t spot. The signal travels to the PCB through the volume and other controls.

Despite its narror interior the Model 620 power amplifier is filled symmetrically. After the toroidal transformer and Elna capacitors are two identical circuit boards on both sides of the chassis apparently for a bipolar input/driver stage, followed by Toshiba 2N3055 bipolar power transistors (60V/15A/115W), two per side, bolted on a sturdy iron plate. 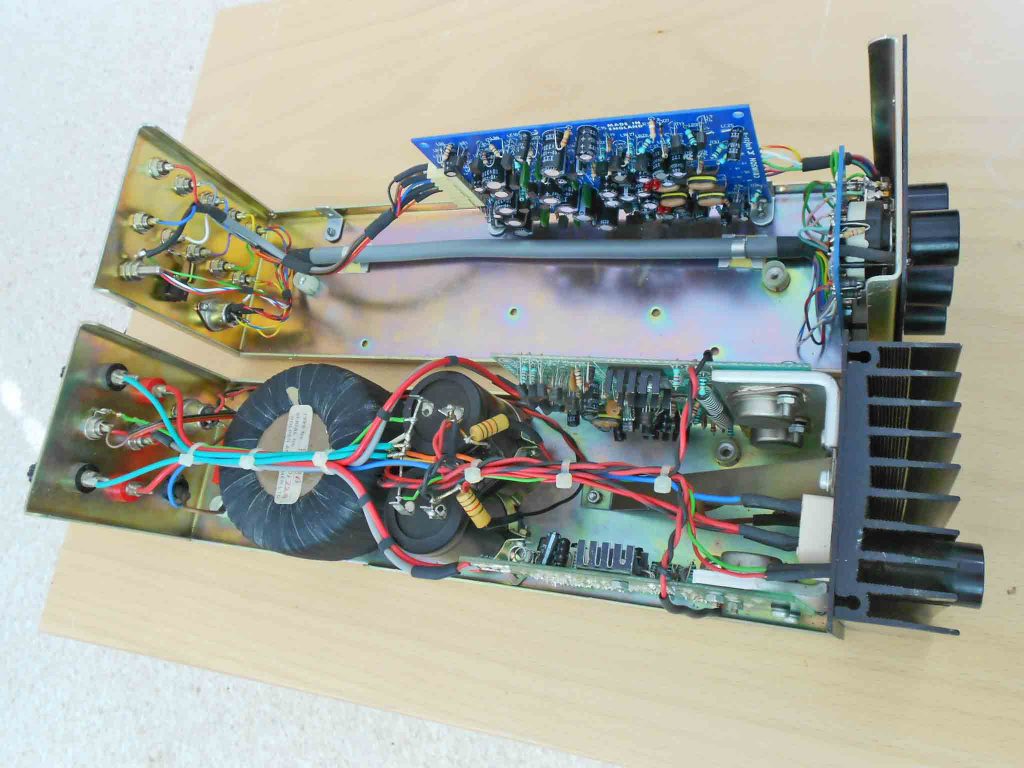 I do not immediately remember another amplifier, where the fins would stick out from the front panel. It’s no offence to the physical appearance of the amp. The power switch is embedded between the ribs. The Model 620 delivers about 50 watts to 8 ohms, double that for 4 ohm.

When one looks at these Crimsons more closely it is easy to sense that amplifier design and manufacturing wasn’t rocket science for Powel. Their own marketing slogan “quality budget amplification” pretty well describes the technical nature of these amps. Nevertheless, the DIY background and functionality of these amps certainly was appealing to many hi-fi enthusiasts, a bit in the same fashion as the first NAD amps did. 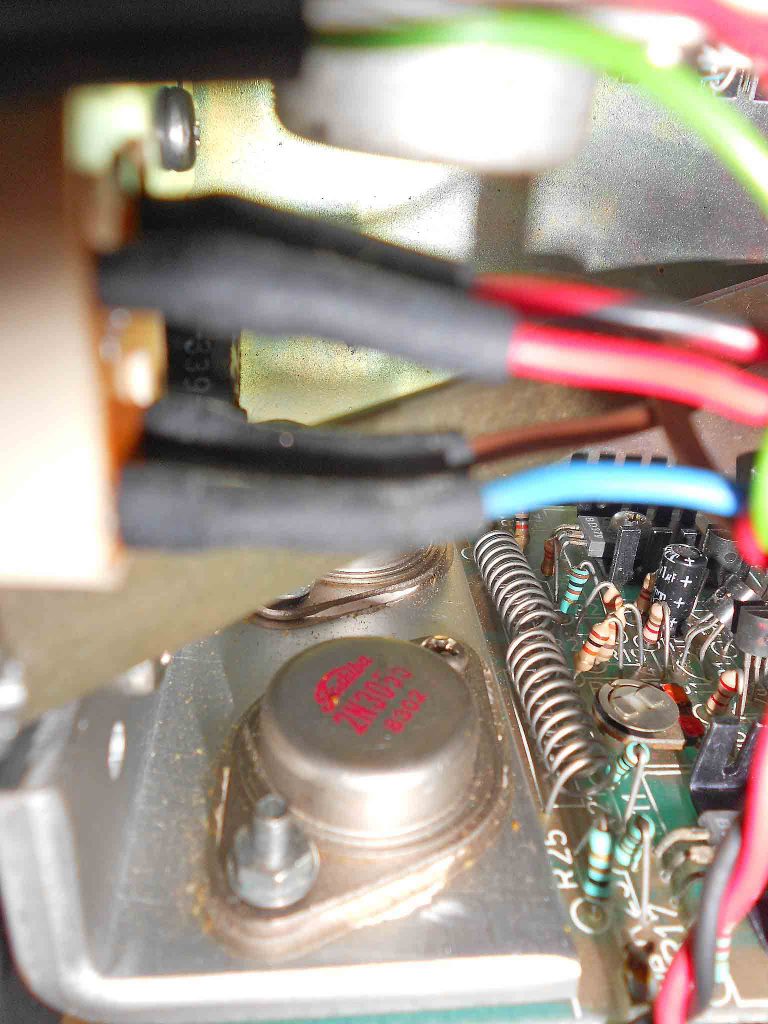 To be honest, I think sonics is overrated in Hi-Fi; the hobby is so much more than just how a device happens to ”sound”, or not. For example: being able to look into such peculiar vintage items as the Crimsons! But following the convention, I did compare the Crimson combo, in terms of the mystical sound, to two amplifiers: The 2 Channel Audio Amplifier (vintage) and Rega Brio R (modern).

The 2 Channel Audio Amplifier from the 1970s is a very special 25W case with a fascinating historical background. It was the first amp that addressed the issue of using abundant negative feedback, potentially harmful to the performance. The full story and description is given here.

One might think that comparing the Crimson combo to The 2CH Audio Amplifier was unfair because Crimson didn’t try to offer more than good basic hi-fi with traditional technical solutions. But nothing’s straightforward; comparing amplifiers (the sound) is a unenviable task. It is often easy to hear whether the amplifier has problems with the speakers at hand or not. But with no clear indication of such a problem, amplifiers tend to sound pretty good, all of them, generally speaking.

So it was this time too. Both amplifiers produced quite a decent sound in front of insensitive mini monitors (6 ohms), sensitive widebanders (11 ohms) and 4 -way vintage speaker (16 ohms). Neither evidenced notable tonal shortcomings such as harsh treble or unnecessarily loose bass department.

Crimson’s double power reserves came through as some kind of feeling of strength which was somewhat lacking when The 2CH Amp was on duty. But the difference wasn’t a big one, and it is quite possible that the observation was due to Crimson’s slightly broader and more generous bass.

Every time I compared the Crimson to itself, it sounded very middling and acceptable. Listening to the Crimson combo left, however, a kind of aftertaste how it might sound over a prolonged listening period? Would it prove to sound “exhausting” as some of the older transistor amplifiers do?

The question electrified when came The 2CH Amp’s turn. Along with The 2CH Amp the sound became more melodious, vivid, airy, less wrapped. Music during the quiet passages was pronouncedly quieter, during louder passages, louder. The locus of the sound was less in front of the speakers. For these reasons, among others, complex sounds seemed to live less on the surface, and therefore sounded also less intrusive.

It occured to me that the friends of Densen amplifiers might find The 2 CH Amp’s cheerfully bright and fast performance very likable. A coincidence or not, Densen is one of the modern amplifier manufacturers who claim to take the TIM distortion seriously and try to get along with no negative feedback in their amps! 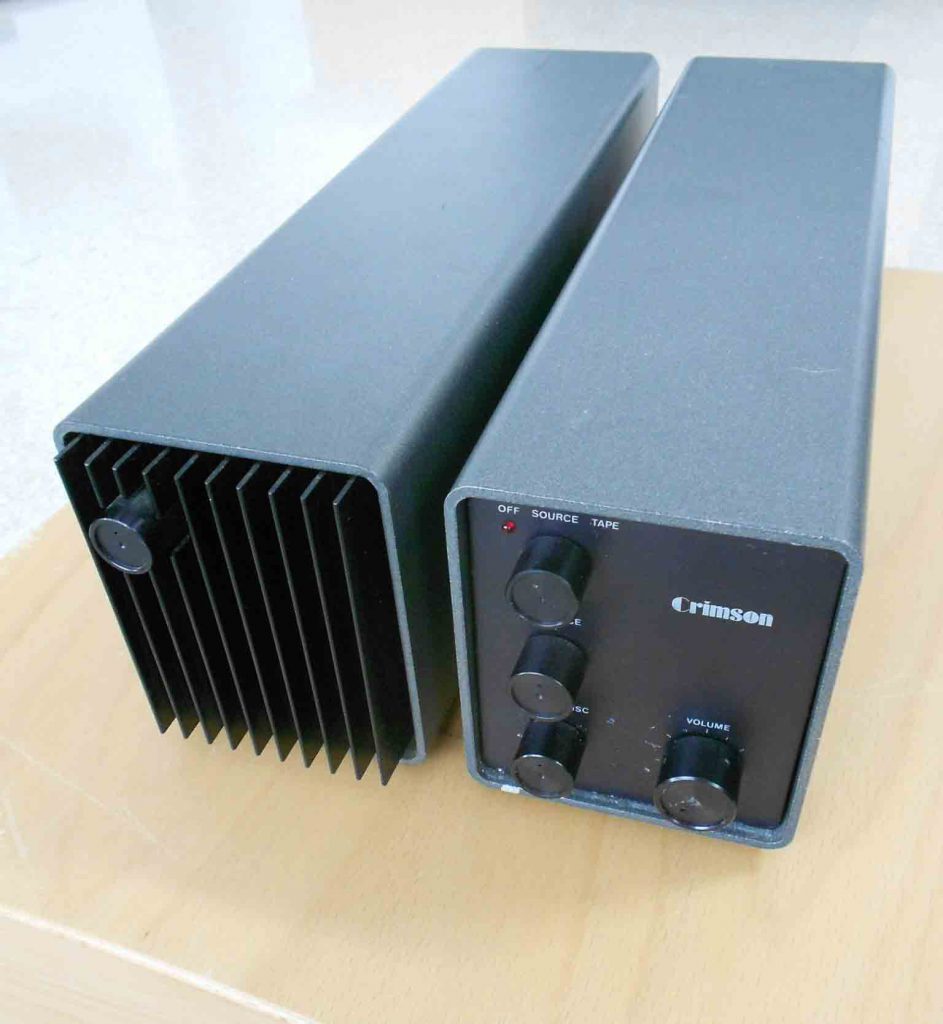 For the Crimson combo I would consider not so sensitive and somewhat introverted speakers that would, whenever required, know how to sparkle. The 2 CH Amp, on the other hand, is one of those amps, which will reward the one who makes the effort of finding the most harmonious speakers for the amp. Without any blind test, it is clear that the sound quality of the Crimsons does not differ in any radical manner from that of many modern amplifiers.

Since these Crimsons saw the day light, the world has witnessed come-back of Class AB tube amplifiers, the emergence of low power triode amps, the rapid proliferation of Class D switching power amps etc. Viewed from the distance and things properly normalized it is easy to state that no major qualitative leap upwards has happened.

At a closer look it was obvious that both my 10W PP 6V6 amp and 7W 300B SET produced a different understanding of the sound revealing more of the sound’s organic pure nature as compared to both the Crimson and The 2CH package. However, here too the listening order tended to destroy the differences.

Not quite at the level of Rega Brio

Alongside the Crimsons, Raga Brio R was noise-free, clearly more precise in reproducing dynamics and more sophisticated in tonal concerns. There’s no exact price for the Crimson combo but my guess is that with Brio R’s 800 euros one could buy 3-4 Crimsons, and if so, the ratio quite nicely describes the difference of degree between their performance level.

It would have been interesting to compare the Crimson combo to a high-quality Class D transistor integrated. My colleague, who also owns NuForce pre- and power amps, compared his Crimson Model 640 mono blocks with his VTL Anniv 60 stereo tube amp and with his Quad 303 power transistor amp, and reported that the Crimsons sounded relatively speaking “dry”. On this basis he assumed that his NuForce power amps would be brighter and faster than hid Crimson power amps but he hadn’t carried out a direct comparison.

So despite the lack of a radical qualitative step, there are ”better” amplifiers around, now and in the past, than the Crimson 600 Series amps. This does not imply that a music lover would not be able to live with the Crimson combo. He certainly can, and I guess some of the audiophiles too (perhaps by making some mods first).

The most urgent condition is to make sure that old amplifiers are definitely in order (no buzz, no pot rasp etc.). That may mean a little extra effort and investment, but it often gets quickly paid back as a bettered overall performance level.

Fortunately, Crimson is still trading and manufacturing (though mainly to export to the USA), and they also do service and upgrade work to all older amplifiers!