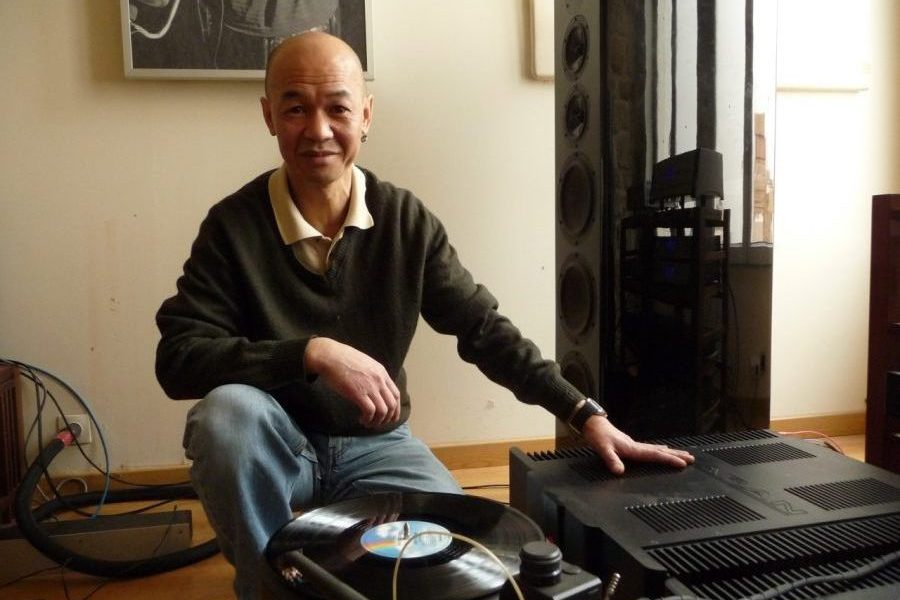 An afternoon with Franck Tchang

I had a pleasure to visit Franck Tchang in his studio in Paris. He is a real personality who has a totally different view to audio from rest of the crowd. Many have been really enthusiastic about Tchang’s approach.

His studio is a combination of two listening rooms and a workspace where he, by hand, makes his wires and the famous resonators.

I’m deeply fond of his products. Sure, they are not for everyone, but if one learns to know the philosophy behind them, one can get the room to sing.

They are merely for a person who wants to fine tune and experiment, not for someone who buys, installs and expects them to fit.
Time and effort, that’s what they need. At the same time one learns a lot of about the room and the set. And how to enjoy music.

Franck is a true gentleman. He seems to be endlessly optimistic, happy and resonates this all to his environment. It is easy to make friends with him. There is no usual sales pitch. Actually he does not try to sell anything. He is openly sharing his knowledge with other people. His resonators usually come in a peculiar package, and the buyer will possibly just have to believe that the resonators work.

First we had a sushi in the neighboring restaurant and next minute we were talking of sound and audio. Franck does not tell you what is the best speaker (“They are all limited.”) or best amp (he seems to go for a huge 500 watt monoblocks) or best demo cd or vinyl. He gets an impressive sound of any of these. He is keenly talking of how rooms, walls and floors transmit sound. For me Franck is firstly a sound designer. His knowledge is deep and while listening him one gets the feeling that he is right. We, the mortals, are just not there yet.

I asked whether a big company would buy his company and make it a million dollar industry. No, he replied, they don’t understand it at all. He consults many companies how to accomplish a better sound. Recently he advised a Japanese car company how to design more silent cars and remove resonance and save some fuel as well.

The biggest compliment might be the many copycats. There are at least four copies of his resonators. They have all purchaised Franck’s set and made their own version. They all fail. “In most cases the material or mass is wrong. They don’t’ resonate.” There is even a huge 600g version of a resonator. “You should put your bananas into it.”

What are the elements of a sound system? An electronic equipment, a room, something (air) that transmits the sound (vibration), and a listener. Three of these can be affected mecanically. Those who don’t believe can close the door of the listening room and leave themselves out… I’ personally am a firm believer that Franck’s products help in designing the audio environment. The closest parallel is Schumann resonators. They work in any room. They are powerful, no room for speculation. 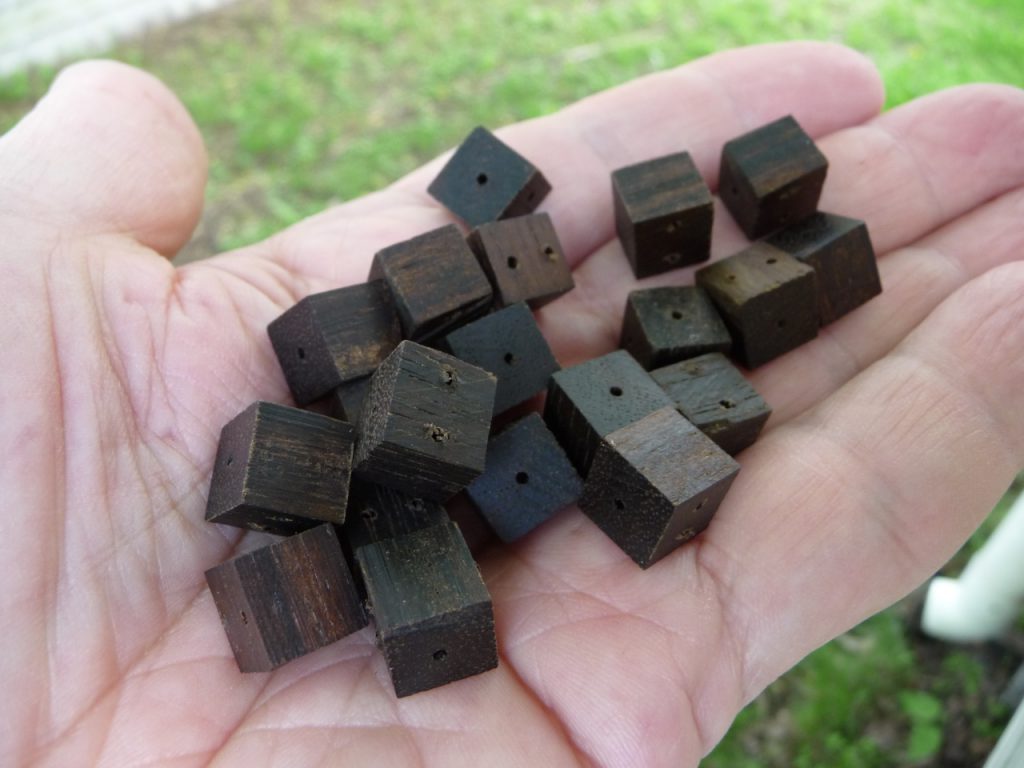 The resonators create upper tones and thus enhance the sound in different parts of the sound spectrum. The copper ones enhance bass and midrange. Very often they are powerful enough to make a change. The silver ones enhance the transients. They can really get the brushes of jazz drums to shine, louder and longer. In a ‘hard sounding’ room, there’s no need for them.

The golden ones (there are two models) bring a really nice touch to upper midrange and higher tones. They too do good for the transients, and make female voice to reveal her linger.

I asked Franck whether a resonator creates a specific note or chord. No, it creates a spectrum of sounds in that particular range where it works. In comparison, try a tuning fork of A in your listening room. It sounds just awful.

For those who love small harmonics and uppertones the resonators can bring a lot of joy. The guitar sound, for example. I have listened to Harry Manx’s cds, especially In Good We Trust von Harry Manx und Kevin Breit (Audio CD – 2007) which is my favourite. It has beatiful selection of slide guitars that resonate back if the playback system is right. The small atonal sounds of the slide tube when Harry slides it on the strings can easily be heard, or loose strings resonating in his guitar. Kevin Breit is a fellow guitarist from Canada (see their YouTubes!) and in another cd his version of Neil Young’s Ohio is just the most tremendous cry ever played on the guitar. All this comes alive like a live guitar in your listening room with resonators. 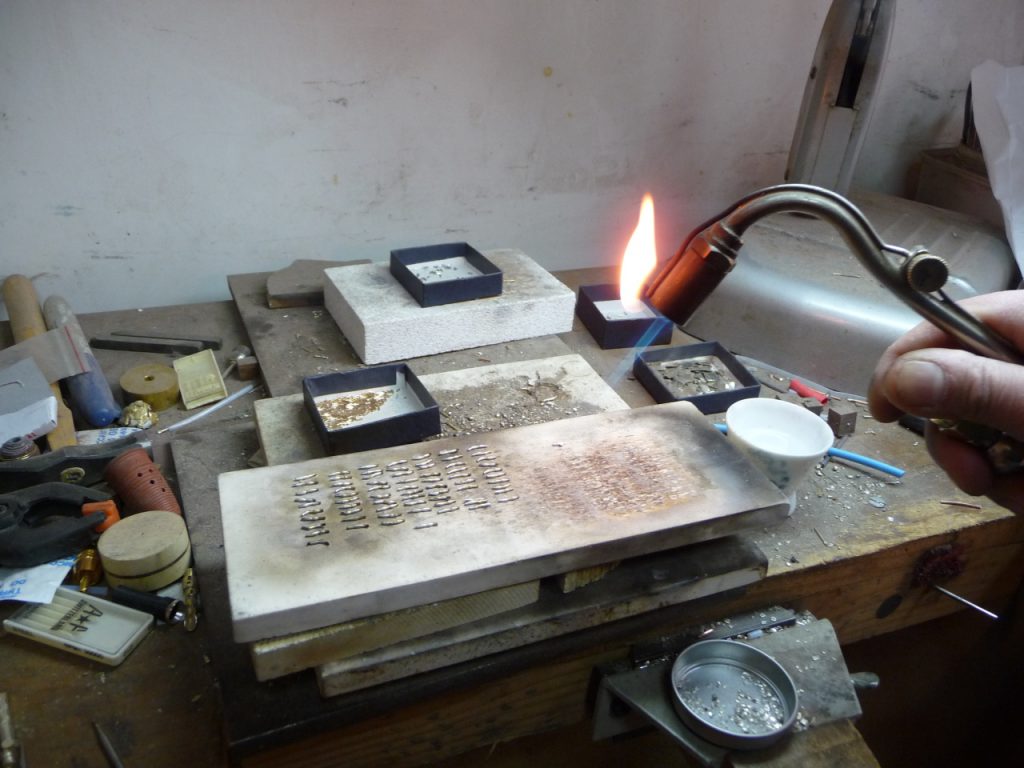 Franck told me that many audio enthusiasts have purchased a set of resonators from him, installed and are happy but that they are too shy to confess that they work.

The small cubes are really wild ones. Honestly I thought I don’t need them. Visiting Franck’s studio proved something else. He does real tricks with them.

As said, the resonators and the small cubes are for a person loves tuning his room and tries to understand the possibilities of room acoustics. You have to do everything else right as well: use the bass traps, use quality components etc. Franck’s products will not do miracles if the playback set is carelessly put together, but they can bring live music back in the room when all is set right. They are directive and strong elements, and will have an effect in any room. 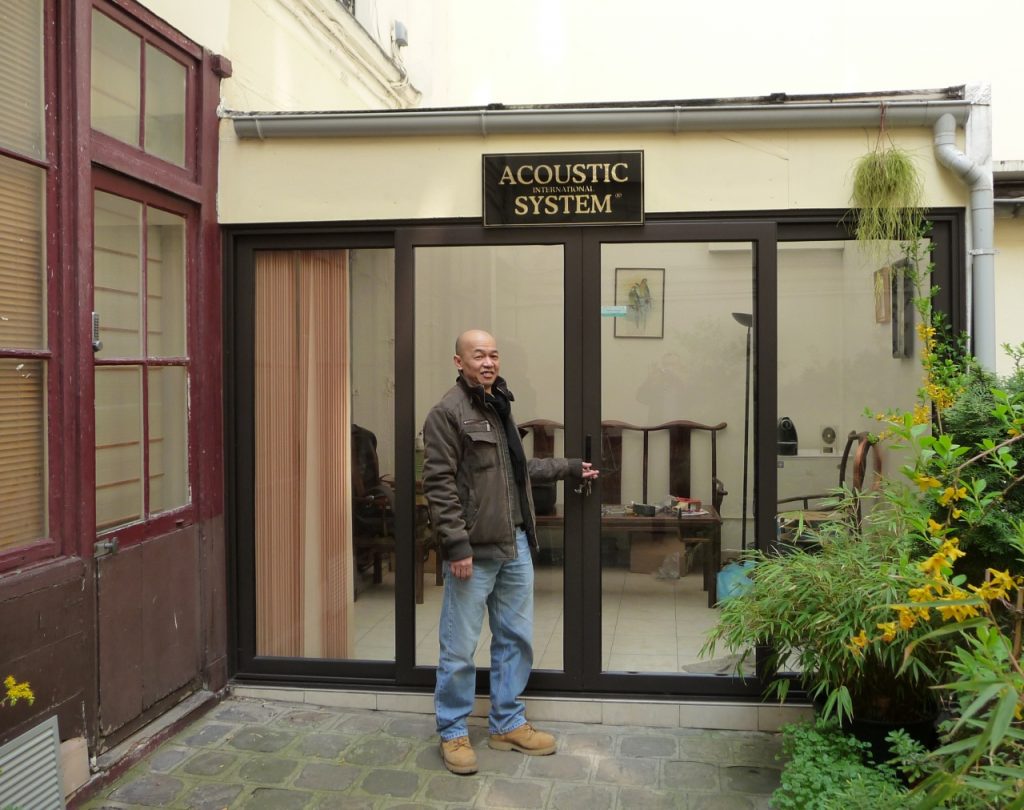 Franck’s first studio consists of two listening rooms, one at the street level, second in a basement. The speakers are specifically made for him and they leave no complaint about the sound. The basement set is interesting because all the hard surface has been covered with Franck’s black cubes. It is virtyally echoless.

Franck is also a keen guitar player himself and studied with the blues guitarist Robben Ford. He plays pretty good solos with Robben’s record in the background.

Franck tells that it is not only the listening room that needs to be treated. In his studio everything from the main door to back storage is tempered with resonators or the small black cubes.

I had brought a few cd’s with me. Petteri Sariola’s Phases has a wonderful guitar solo piece titled Until We Meet. It has a deep soundstage and great transients. Franck listens to it for a moment, goes to somewhere back in the room, does something, and the sound is dramatically different. Now Petteri’s guitar has a brighter color. The transients are beautifully alive and tuned just for this room.

One of my favourite cd’s of this spring has been Ruth Fosters The Truth According to Ruthie Foster. It has a deep, solid bass. The track 7: Nickel and a nail. I’m not happy with the bass that seems to be too flat. It should be really muscular and make one jump. Franck goes back again and voila! The bass is accurate, rock solid and we both scream like small boys with a experience. We are really enveloped by music and it couldn’t be better. This is what audio is at its best, make one breath like in the slopes of Himalajas. Young and live again! Music can heel.

We change to the vinyl. The result? Living Stereo’s Witches Brew LP has the most kicking transients I ever encountered.

Franck gives me two bags of the cubes and I immediately try them at home. It is still a piece of magic how these small cubes affect the sound. When I add them to the window, the door next the loudspeakers … yes there is a difference: the sound seems more accurate, more focused and the soundstage can be tuned with them too. Just one over your head on the roof, there’s a difference. 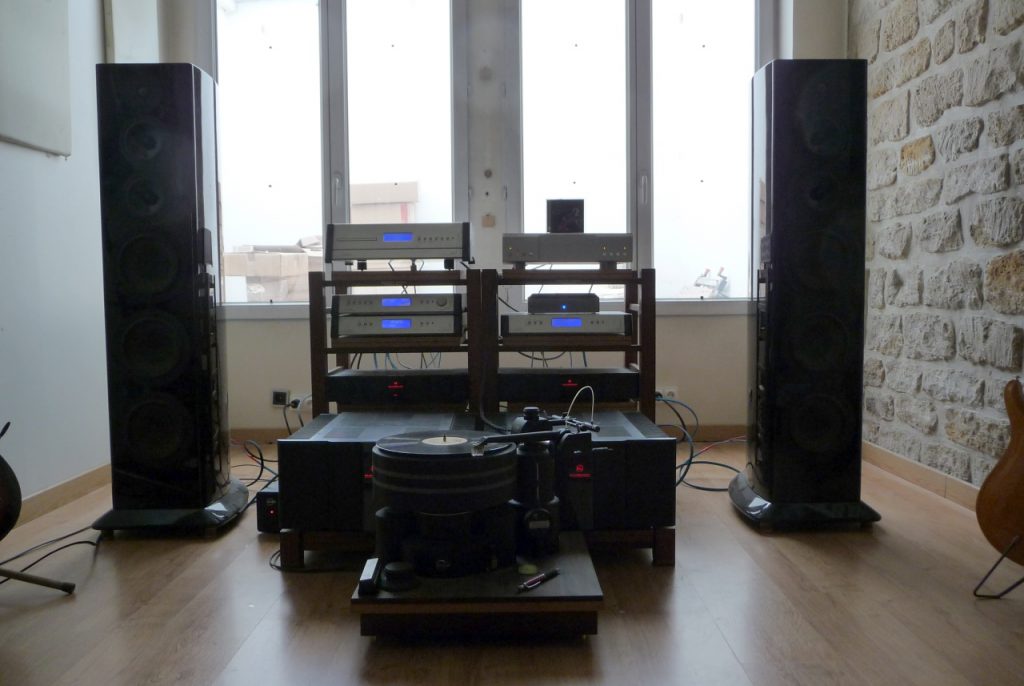 Franck now shows how he makes a pair of Liveline power cables. He takes one string of silver and one copper. He uses gold, silver, and platinum and uses them as DNA in between and there are 60 000 possibilities to put them wrong. The silver has transients, gold has warmth and copper great midrange. Together they make really great cables. He uses the same combination in his interconnects.

Three hours is a short time with Franck. I offered to work free for two months in his studio. I would learn so much just watching him. I know I need to be back here soon.