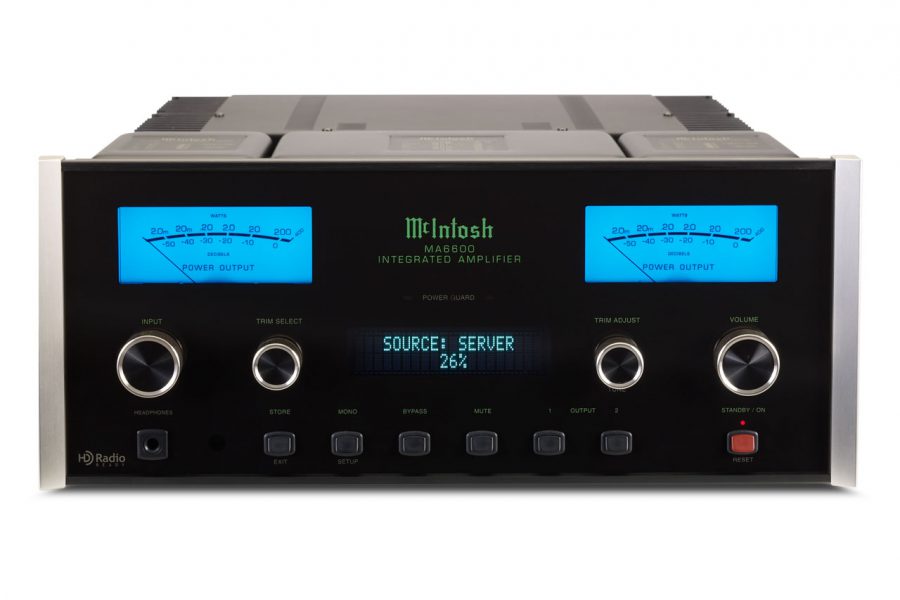 Technically speaking, McIntosh amplifiers are, of course, well-known for their transformer coupling. As for tube amps, this means so-called Unity Coupled Circuit switching, whereby two primary strands, one connected through the power supply to the plate and cathode of one of the output tubes, and the other in the same way to the another tube, are tightly wound together for complete magnetic coupling.

When it comes to McIntosh transistor amplifiers, which by the way, McIntosh has been manufacturing over 50 years, they too carry transformers at the power amp stage: auto-transformers. In contrast to the output transformers of the tube amps, auto-transformers do not have separate primaries and secondaries. Portions of the same winding act as both the primary and the secondary side of the transformer.

Auto-transformers sport less rounds and has a smaller core than conventional two-coil transformers, and do not provide electrical insulation. In Home Audio, auto-transformers are being used, among other things, for achieving a better amplifier to speaker match.

In some speakers the signal is routed via an auto-transformer before inputted to the cross-over or the voice-coil. McIntosh added auto-transformers to the output stage of its transistor amps, on both sides of the AC trafo.

The impedance response of a speaker is rarely flat. The impedance typically rises toward higher frequencies and decreases at lower frequencies. Depending on the impedance, the need for amplifier power varies, and this must be somehow taken into account at the amplifier end, and compensated.

Auto-transformers always align the load impedance so that the amplifier outputs more or less the same amount of power independent on the impedance.

Thanks to their auto-transformers, McIntosh transistor amplifiers, up from the model MA-6600, do not need to worry about fluctuations in the speaker’s impedance response. Auto-transformers always align the load impedance so that the amplifier outputs more or less the same amount of power independent on the impedance. This is good news, and can cause headache only if the speaker is manufactured assuming that amplifiers are not capable of handling impedance variations at the speaker end.

The MA-6600’s got a two-stage output stage: a differential voltage amplifier is connected to a push-pull power amplifier and from there to auto-transformers. As always in McIntosh amplifiers, the power supply is regulated, has a massive power transformer and enough of filter capacitance (100 Jules). The MA-6600 delivers power up to 200 watts (8 Ohms) at 0.005% total harmonic distortion.

The Power Guard circuit monitors the input and output signals and dynamically adjust the input signal level so that the amplifier is not overridden into distortion. Further, the circuit protects the amplifier from excessive temperature variations, and impedance matching problems. If there’s anything worry-some, the front panel indicator light remains on and the device is muted. 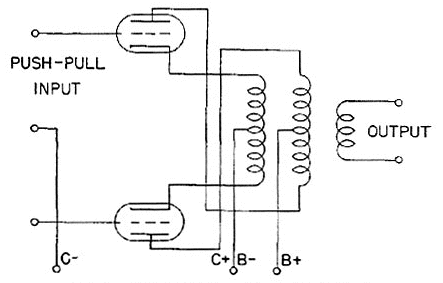 As impressive as the MA-6600’s transformer coupled power stage is, it’s only half of the story. At least equally important is how this amp carries out the American ideal of a “central processing unit”. A central unit is a complete “full-function” pre-amplifier at the heart of a system, providing the signal from the input to the output, and allowing the user to do whatever adjustments he wants to do along the way.  This is the part of the technical system with which listeners as human beings most closely communicate.

The MA-6600 features eight line inputs, seven of which are unbalanced. Each input can be renamed and configured according to preferences of the user. Tone control and channel balance adjustments take place in the digital domain. Each input can be adjusted individually (+/- 12dB) in terms of bass (30Hz) and treble (10000Hz), and the amp will remember the settings next time. Adjustments can be bypassed but with Logic Circus controlled switches McIntosh has sought to ensure that the signal transfer would affect the signal as little as possible.

The MA-6600 is a truly versatile amplifier. It was also smooth and trouble free to operate in practice. It’s always a pleasure when everything – the buttons, volume setting etc. – works as designed. I like that. The older I get, the more I like that.

The gain for each input can be set (+/- 6dB) separately, which is useful especially for those who use sources with varying output voltage. In addition, the MA-6000 sports a quality headphone amp and a phono-stage for MM cartridges (47kOhm/65pF) – not part of this review. As an option, McIntosh offers TM2 tuner module, for which there’s a slot at the rear panel. There are still those who want to have a receiver rather than an integrated stereo amplifier.

And so on and on. The MA-6600 is a truly versatile amplifier. It was also smooth and trouble free to operate in practice. It’s always a pleasure when everything – the buttons, volume setting etc. – works as designed. I like that. The older I get, the more I like that.

People often call amps such as the MA-6600 as tanks. But for a tank the MA-6600 is, I think, a way too elegant. And I’m not just referring to its glass front panel and the lit watt-meters, which are like big boys’ rev. meters in their cars: no real need, but nice to watch. By ‘elegance’ I mean the finishing and all the typical details of McIntosh amps such as circuit diagrams printed on the transformer covers  etc., in addition to apparent signs of the high quality of the work.

The MA-6600 does not scream to get mounted in an aggressive-looking rack between the speakers, nor on the heavy piece of stone on the floor next to the speakers. Instead, it is suitable for a solid side table of a certain classic style, preferably made of wood, decorating the living room, which is used as the listening space. Not some separate lonely listening bunker. 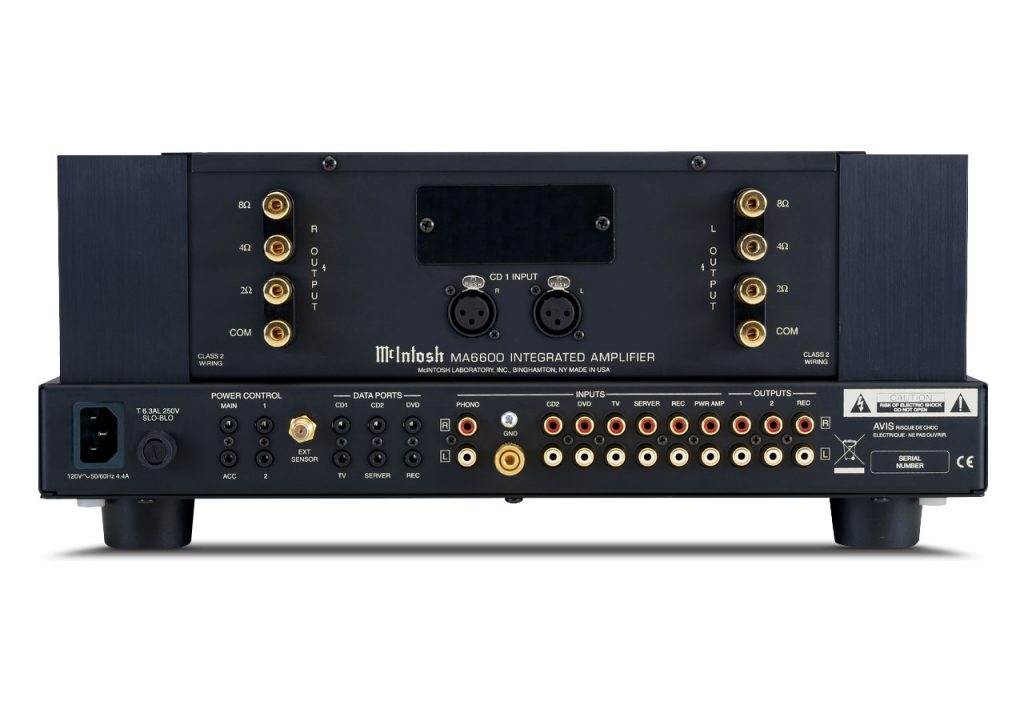 Such findings are, however, pure generalizations. I’ve seen many times how even the best tube amps on earth, do not miraculously shine in a wrong environment. For the same reason, I’d not recommend, obviously, the 200W MA-6600 as an ideal amp for a vintage horn speaker or some hyper-sensitive widebander.

In addition, the MA-6600 was dead quiet, no hum, no hiss, no nothing which is remarkable given the sensitivity of the speakers.

The thing is not that the MA-6600 could not drive eg. a widebander. I tried it with a >95dB sensitive widebandwidth speaker, and there wasn’t anything in the sound why I should not have continued listening. Quite the contrary. The bass sigh from the rear horn was better in control than with some of my tube amps, and the tweeter performance wasn’t unpleasant for my ears at all. In addition, the MA-6600 was dead quiet, no hum, no hiss, no nothing which is remarkable given the sensitivity of the speakers.

Could it be that high impedance speakers suit better for transistor amplifiers with auto-transformers than low impedance speakers? I don’t know, but in spite of everything I would leave widebanders and horns backed by huge motors out of the MA-6600’s speaker selection, and concentrate on another type of speakers, which there are plenty, and the number of which the MA-6600 is not restricting thanks to its 2, 4 and 8 ohm speaker outs.

The most sensible approach to the so-called amplifier “sound” is to try to understand the amp in a right kind of speaker environment. In the MA-6600’s case, this means, mainly, although not exclusively, power hungry dynamic speakers. The best would have been able to try how, say, half a dozen different types of dynamic multi-way speakers react to the topology and auto-transformers of the MA-6600’s output stage.

In particular, I liked how lightly and transparently the combination reproduced vocal music. I also felt good about the fact the listener does not have to worry about the sound of music whichever turns it takes.

In practice, the experiment was limited to two three small dynamic wall/standmount speakers including the Upload Audio UA1, as well as a mighty floorstander, Genesis 5.3. With the first mentioned speakers the MA-6600 served music with a sense of power and tonally impartially. In particular, I liked how lightly and transparently the combination reproduced vocal music. I also felt good about the fact the listener does not have to worry about the sound of music whichever turns it takes. If something was missing, it was a certain brittle vividness characteristic to some tube amps.

No matter. Small stand speakers are unlikely to be an adequate match with the MA-6600, if for no other reason, then because of the unbalance in price. I wouldn’t exclude, however, some robust two-way high-end speaker with a 7-8 inch mid-woofer, such as the TAD Compact Reference CR1, for example.

The 5-way Genesis 5.3 does not need an amplifier for frequencies below 100 Hz, but for the rest of the band-width benefits from an efficient quality amplifier. Despite the speaker’s 90dB sensitivity, the hands of the MA-6600’s W-meters wobbled well beyond the centerline even with soft music.

The fully American Genesis/McIntosh combination, together with Finnish Graditech cables, proved quite successful with practically every music I fed into the system. The combo offered a brisk and largely uncolored performance. Subjectively measured, the MA-6600 took a good care of the 5.3’s eight driver units, kept them under control without interfering with the speaker’s tonal balance, and repeated rhythm music rhythmically with no appearance of dragging. Again, the amplifier didn’t present the speaker’s ribbon tweeters in an unfavorable light, and the amount of details in the sound was fabulous. No special complaints about the qualities of the sound-stage either.

The extent to which this was due to the amplifier alone, it is impossible to confirm. The Genesis/McIntosh/Graditech experience once again showed how wide of the mark and abstract is speech about the “sound” of an amp. The MA-6600 is a powerful transistor amp with auto-transformers and variety of other technical solutions to attain the best possible compatibility with a number of speakers. The end result depends both on the speakers and the amplifier. From this perspective, speech about the “amplifier sound”, as if in a vacuum, is more like telling fairy-tails. Instead, it’s a hard boiled fact that the Genesis 5.3/McIntosh MA-6600 was able to produce a top sound quality together.